BALTIMORE — The Yankees were knocked a year ago for not beating bad teams like the Orioles enough.

Evidently, they took that message to heart, and they are feasting on subpar opponents this season.

They’ve now won four in a row and nine of 10 overall after a 3-2 victory over the Orioles on Wednesday night.

Gerrit Cole was the latest starter to pitch well, as the right-hander delivered his fourth consecutive solid outing, limiting Baltimore to two runs in seven innings at Camden Yards.

After his latest outing in which he didn’t walk a batter, Cole has lowered his ERA from 6.35, after his five-walk nightmare on April 19 in Detroit, to 2.89

The Yankees (28-9), in the midst of a 21-3 run, scored three two-out runs against right-hander Jordan Lyles in the top of the first. And they made them hold up, as they didn’t score again.

After Aaron Hicks and Aaron Judge led off the game with groundouts, Anthony Rizzo and Josh Donaldson each singled. Gleyber Torres followed with a double to right that scored Rizzo and sent Donaldson to third.

With a one-run lead, Donaldson then scored on a wild pitch by right-hander Jordan Lyles that got by catcher Anthony Bemboom. And Torres was able to come around on the same play, after Bemboom made a bad throw to Lyles covering the plate to give the Yankees a 3-0 lead.

But Lyles, facing the Yankees for the third time this season, shut them down after the first inning and allowed just a pair of singles before retiring the final 13 batters he faced. 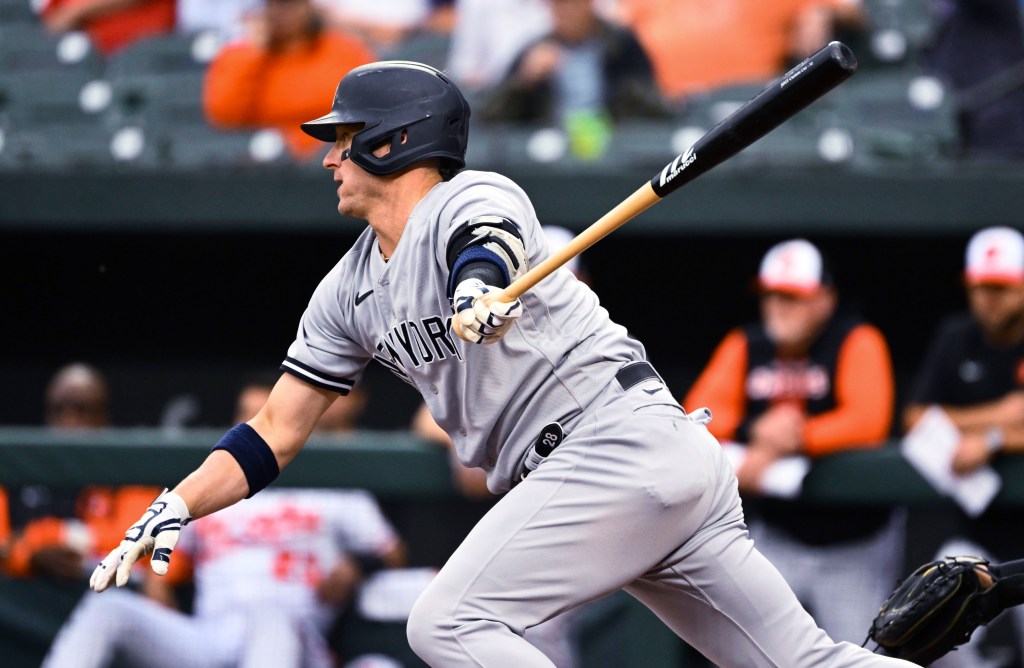 Josh Donaldson belts a single during the Yankees’ three-run first inning in their win over the Orioles.AP

Cole pitched around a ground-rule double by Austin Hays and an infield hit by Trey Mancini in a 24-pitch bottom of the first — helped by a nice play by Marwin Gonzalez, who got the start in right field.

Following a leadoff single by Rougned Odor in the bottom of the second, Cole found his rhythm and retired the next eight batters he faced — including a stretch of five straight strikeouts — before Tyler Nevin’s two-out single in the fifth.

But the Orioles got to Cole in the sixth, with a leadoff single by Cedric Mullins and an RBI double by Austin Hays to make it 3-1. Hays moved to third on a grounder to second by Anthony Santander and scored on Mancini’s ground ball to first, as Rizzo’s throw to Jose Trevino at the plate was just late — cutting the Yankees’ lead to a run.

The Yankees wasted a leadoff double by Trevino off Felix Bautista in the eighth, as the struggling Hicks whiffed, Judge grounded to short and Rizzo struck out.

Clay Holmes replaced Cole to start the bottom of the eighth and gave up an infield hit to Hays before Santander ripped a liner that was snagged by Rizzo, who turned it into an inning-ending double play.

Needing just eight pitches to get through the eighth, Holmes came back out for the ninth and got a five-out save.

Why removing the charger from smartphone boxes is much more insidious than people think- Technology News, Firstpost

New and Noteworthy: What I Read This Week—Edition 160

More Than 30, Including Women And Children, Killed, Their Bodies Burnt In Myanmar: Report