Prime Minister Boris Johnson has said the Brexit deal for Northern Ireland – called the protocol – “is turning into a political problem” that needs to be rectified.

The deal – which he negotiated and signed up to – came into force in January 2021 and means Northern Ireland (NI) still follows some EU rules.

The Democratic Unionist Party (DUP) oppose this because it has created a trade barrier with the rest of the UK. It won’t allow the formation of a new government in NI unless there are significant changes. However, following the recent elections, a majority of assembly members accept the protocol.

Mr Johnson is pushing for changes to the deal – and the government is considering whether to override parts of it – but this is in marked contrast to what he said about the protocol at the time he negotiated it.

Mr Johnson gave this assessment in the House of Commons shortly after agreeing the terms of the deal, urging MPs to back it.

But annexes to the protocol set out a long list of EU laws that would apply to NI, including laws dealing with products of animal origin and the EU customs code.

The government’s own impact assessment, published at the time, was clear. “Goods arriving in Northern Ireland, including from Great Britain,” it said, “would undergo regulatory checks in accordance with EU rules.”

And an internal document drawn up by the Treasury – leaked a few weeks later – warned that “customs declarations and documentary and physical checks… will be highly disruptive to the NI economy”.

It also highlighted potential constitutional implications, saying NI could be “symbolically separated” from the rest of the UK.

One year on from the changes coming into effect, the NI Chambers of Commerce found that a very high proportion of members had experienced increases in prices of goods and services and the amount of time taken to transport goods.

‘If somebody asks to do that, tell them to ring up the prime minister and I will direct them to throw that form in the bin’ – 8 November 2019

Mr Johnson was asked by an NI businessman whether he could tell his staff that they wouldn’t have to complete customs declarations for goods going from NI to GB. Mr Johnson said he could.

In subsequent negotiations, though, the the need for formal NI-GB customs forms was waived – so this part of the prime minister’s promise was met. 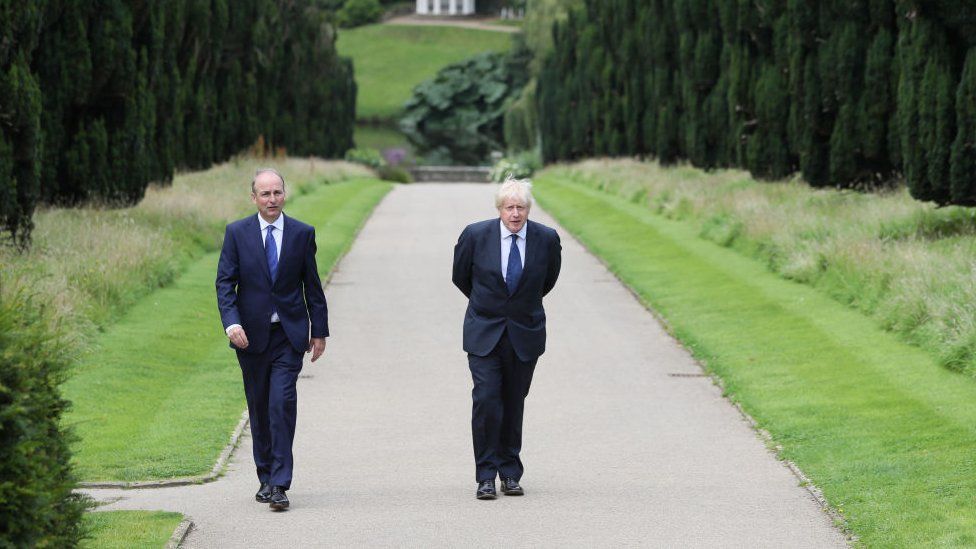 In December 2019, Mr Johnson said this on Sky News in response to a question about the warnings in the leaked Treasury document.

Parts of the Treasury document are now out of date (the possibility that tariffs or taxes could be charged on many goods crossing from GB to NI, for example, was removed by the signing of the new EU-UK free trade agreement in December 2020).

But it set out clearly that there would be a range of bureaucratic measures affecting GB-NI trade, including customs declarations, food safety checks, security checks, and regulatory checks on product standards.

The Department of Agriculture, Environment and Rural Affairs (DAERA), says that between 1 January 2021 and 20 March 2022 various checks (whether on documents or physical inspections) were carried out at NI ports on:

And this was despite a series of “grace periods” – during which the full implementation of EU rules was temporarily suspended to allow businesses to get used to the new way of trading.

Boris Johnson asserted this in response to a question in Parliament from the DUP’s Nigel Dodds who said the protocol “drives a coach and horses through the Belfast Agreement” and urged Mr Johnson to reconsider the plan.

He reminded the prime minister that he had told the DUP conference in 2018 that “no British Conservative government could or should sign up” to an arrangement with regulatory checks and customs controls between GB and NI.

On 11 May 2022, at a press conference in Sweden, Mr Johnson said that the Good Friday Agreement meant that “things have got to command cross-community support. Plainly the Northern Ireland Protocol fails to do that and we need to sort it out”.

The protocol has a consent mechanism that means assembly members are asked to vote on it. The first consent vote is due in 2024. 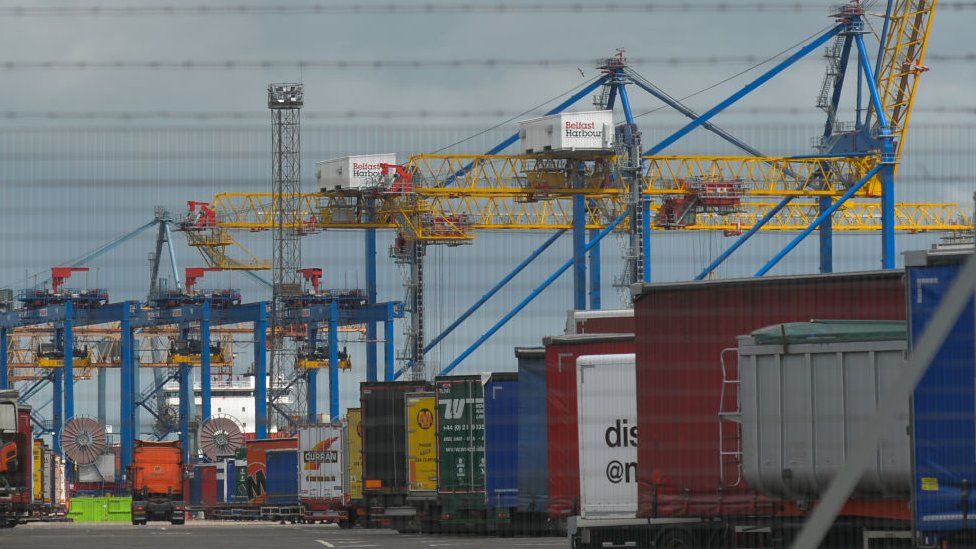 In August 2020, Mr Johnson made this pledge – one he’s repeated several times.

But you don’t have to have passport controls and officers wearing peaked caps to qualify as a border.

NI is being treated differently than the rest of the UK for the trade in goods, as the protocol said it would be. So, there is a trade border in the Irish Sea.

The DUP is deeply unhappy about this, and has adopted the slogan “No border in the Irish Sea”.

What have the UK and the EU said since?

Boris Johnson says the EU has been too strict in its interpretation of the protocol by sticking to the letter of the law. In July 2021, he issued his proposals for change.

He wants to dispense with a lot of the checks the agreement creates, and rely on the honesty of businesses to make sure that no EU rules are being broken.

When it comes to changing the actual treaty, the EU is resolute. European Commission vice-president Maros Sefcovic said: “The protocol, as a cornerstone of the [Brexit] withdrawal agreement, is an international agreement. Its renegotiation is not an option.”