The group was armed with pepper spray, a bayonet, a machete and batons, according to a statement from the Brandenburg Southern Police press office.

Its members were responding to a call from the far-right “Der Dritte Weg” (Third Way) party for a so-called “border walk,” police said.

A growing number of migrants have been attempting to enter the European Union from Belarus amid accusations that authorities in Minsk are facilitating migration to the bloc’s eastern border.

Police in the town of Guben in Brandenberg — one of three German states bordering Poland, along with Saxony and Mecklenburg-Western Pomerania — confirmed to CNN that several members of the vigilante group had been stopped there and in nearby villages.

Some of those stopped by police had traveled to the area from other parts of the country, Reuters reported.

On Saturday, 120 people from Guben held a vigil to demonstrate their opposition to the planned far-right border patrols, according to a local chapter of the Salvation Army.

The premier of Saxony, Michael Kretschmer, condemned the patrols and spoke out against right-wing extremism in an interview Sunday.

“Germany is a Christian country and refugees must be treated fairly — even if they do not have a right to stay in Germany. We are humans and we treat others as humans,” Kretschmer told public-service broadcaster ARD. “We must take a clear-cut position against right wing extremism.” 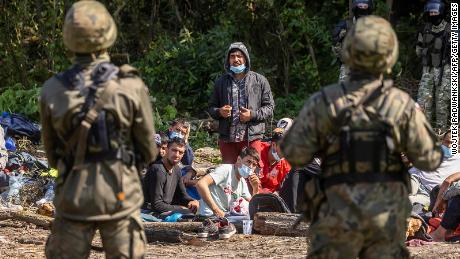 German officers will continue to patrol areas along the German-Polish border and are working closely with federal authorities, police said in the statement.

Police in Guben told CNN the number of federal police sent to help secure the Polish border has increased “substantially,” but did not confirm how many additional officers have been stationed in the region.

On Sunday, German interior minister Horst Seehofer told the Bild am Sonntag newspaper that an extra 800 officers had been sent to the region.

“Hundreds of officers are currently on duty there day and night. If necessary, I am prepared to reinforce them even further,” Seehofer told the paper.

There have been 6,162 unauthorized entries into Germany from Belarus and Poland so far this year, Seehofer said.

Last week, Seehofer said there were no plans to close the border with Poland, but on Sunday he said controls might have to be implemented. 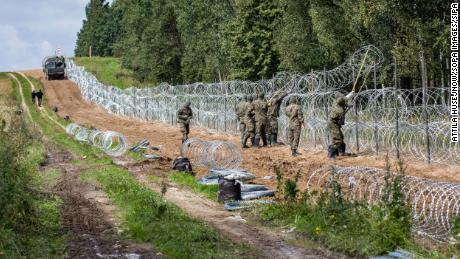 “If the situation on the German-Polish border does not ease, we will also have to consider whether this step needs to be taken in coordination with Poland and the state of Brandenburg. This decision will come to the next government,” he said.

Several EU states have accused Belarusian President Alexander Lukashenko of sending migrants to the border with the EU in retaliation for sanctions imposed by the bloc after Belarusian authorities forced a Ryanair plane to land in Minsk so they could arrest an opposition blogger on board.

The EU has said it will continue to counter what it has called a “hybrid attack… by the Belarusian regime,” and has condemned the use of migrants for political purposes.

Lukashenko denies this and has blamed the West for what he says is a looming humanitarian catastrophe, after migrants were left stranded on the Belarusian-Polish border.

Barbados Becomes A Republic And Honors Rihanna As A Hero

Researcher: Medicare Advantage Plans Costing Billions More Than They Should