FA Cup final: Trent Alexander-Arnold versus Reece James in battle of the full-backs

Trent Alexander-Arnold and Reece James will be hoping to be in England’s World Cup squad this yearVenue: Wembley Stadium Date: Saturday, 14 May Kick-off: 16:45 BSTCoverage: Watch on BBC One, BBC iPlayer and BBC Sport website

There are few areas of the England team that will give Gareth Southgate more of a headache for the upcoming World Cup in Qatar than the right-back position.

The latter two are set to go head-to-head on Saturday in the FA Cup final, so as well as a chance to win some silverware the Wembley encounter will also be a bit of an audition – an opportunity to catch Southgate’s eye.

Both Alexander-Arnold and James have had brilliant seasons – so how do the two compare?

Who is the better defender? 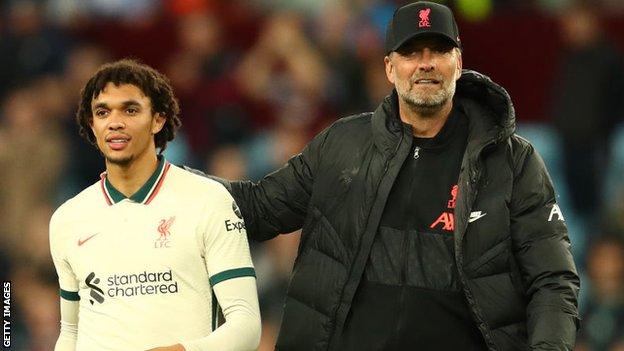 This is a tough comparison given the teams’ different playing styles, and that a big reason for their place in their respective sides is down to the attacking element of their game.

Jurgen Klopp sets his Liverpool team up to press the opposition, force defenders into mistakes and win possession as high up the pitch as possible.

It is perhaps no surprise therefore that Alexander-Arnold, 23, outshines James, 22, when it comes to getting the ball back for his team. The Liverpool man has won possession considerably more often (319 times to 150) and averages more interceptions than James per 90 minutes, although he has played a lot more than his Chelsea counterpart.

James, however, is better at stopping opposition players when they are on the attack. At 76% compared to 58%, the Chelsea full-back’s tackle success rate is much higher than Alexander-Arnold’s.

“Trent is not as good defensively as he is at going forward, but he is brilliant going forward,” former Liverpool defender Mark Lawrenson told BBC Sport.

“It’s not as if Trent leaves any gaps at the back.”

Who is better going forward? 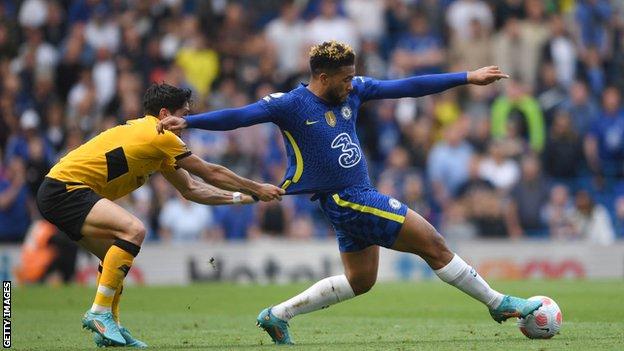 Reece James has had an outstanding season for Chelsea, despite a lengthy period out with injury

With his desire to get up the pitch and ability to put in brilliant crosses, it is of no surprise Alexander-Arnold has been heavily involved in creating goals for his team-mates.

In the Premier League he has 12 assists in 31 games, which is almost double the amount James has, but once again there is the caveat that the Chelsea man has made fewer appearances, with his seven assists coming in 23 games.

Alexander-Arnold is more influential in setting up goals for team-mates, while James provides more of a direct goal threat. He has scored six goals – compared with two for Alexander-Arnold – and that makes him the highest-scoring defender in the Premier League.

“He is the modern-day footballer,” said former Manchester United defender and BT Sport pundit Rio Ferdinand after watching James play a starring role against Real Madrid in the Champions League.

“We talk about Trent Alexander-Arnold but he is right up there with him. You can’t split them really.”

How influential are they for their clubs?

There’s little doubt in Chelsea boss Thomas Tuchel’s mind that if he had James available for the whole season the Blues would have challenged Manchester City and Liverpool more closely in the title battle.

The 22-year-old was ruled out for two months with a hamstring injury in the middle of the campaign, a crucial period for Tuchel’s side.

In his last game before he was sidelined – a 1-1 draw with Brighton on 29 December – Chelsea were second in the table, eight points behind Manchester City.

His next Premier League game was not until 5 March – a 4-0 win against Burnley in which James opened the scoring – but by that point Chelsea were 10 points behind second-placed Liverpool and 13 behind City at the top of the table.

James is crucial to the way Tuchel likes to play, in part because of his defensive flexibility. He is just as capable playing as a right wing-back as he is as a right-sided central defender.

“I would love to have two of Reece James,” Tuchel said last month, following his return from injury.

“It’s like 50% towards wing-back and 45% towards the back three. It depends a little bit on how the opponent plays against us.

“I’m a bit more into that his very best position is the wing-back position where he is perhaps even more decisive, more useful. But it is more demanding.”

Similarly, Liverpool are weaker without Alexander-Arnold in their side and he has been a key part of Klopp’s team for the past few seasons.

His ability to turn defence into attack is pivotal to the German coach’s counter-pressing game.

Alexander-Arnold has been questioned by some for the strength of the defensive side of his game, and while it is not his strongest point, he has still played his part in a side that has kept 21 clean sheets in the Premier League this season – no team has more.

Like Tuchel with James, Klopp wishes he could have more than one Alexander-Arnold in his team.

“Of course, he is still in the right-back position to defend especially, then he’s a right winger, then he’s an eight, a six, a playmaker,” he said in December.

Is one better than the other?

Statistics only provide a certain amount of the picture, and many of them are influenced by factors that they don’t show – such as team tactics, opposition and how games themselves unfold.

Determining who is the best full-back is ultimately subjective, but only one can fill that spot for the World Cup later this year.

Despite their brilliant performances at club level both players are yet to establish themselves as automatic England selections. Alexander-Arnold has been capped 16 times since making his debut in 2018, while James has 10 caps since making his first appearance in 2020.

“For England, Gareth Southgate seems to like Kieran Trippier at right-back over these two but the way he sets his side up means England could play with two really attacking full-backs – they have got two holding midfield players and two centre-backs, sometimes three,” Lawrenson added.

“So take the shackles off and get your man in. For me, it would be Trent. He shades it.”

But with Southgate watching, an exceptional performance at Wembley on Saturday could go a long way to determining who England’s starting right-back in Qatar will be.

If you are viewing this page on the BBC News app please click here to vote.

Most Women Denied Abortions by Texas Law Got Them Another Way