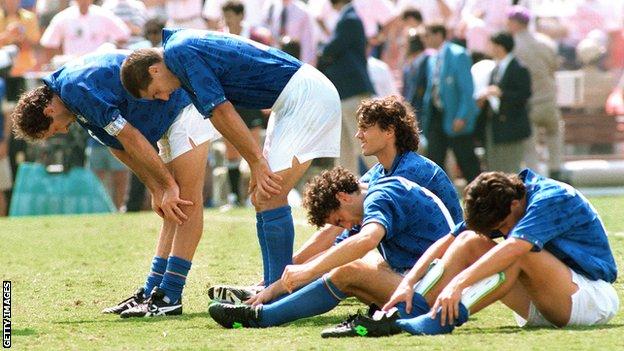 They are also etched into the memory of every Italian fan who witnessed the country’s World Cup penalty shootout defeats of 1990 and 1994.

All three spoke of the trauma they felt over missing their spot-kicks. All three sought solace in the ‘Mind Room’, Italian football’s first psychology laboratory.

Backed by Silvio Berlusconi and hailed by a succession of Milan managers from Arrigo Sacchi to Carlo Ancelotti, the Mind Room helped underpin an unprecedented run of success as the Rossoneri won 21 major trophies during the 23 years it was operational from 1986.

Combining stress relief therapy with cognitive training and neuroscience, the laboratory’s impact would be felt as far afield as Chelsea, where its founder constructed a similar set-up in 2009.

Things had come a long way since the plan for the first incarnation was hatched, at a meeting between a soon-to-be Italian prime minister and an amateur karate champion.

Dr Bruno Demichelis had been a martial arts student since he was a young teenager. In 1971, aged 24, he was beaten at an international karate competition by a less-fancied Japanese opponent. He struggled to process defeat and returned home to Italy looking for answers.

“It wasn’t a technical problem or a physical problem; I was very fit and very well-trained. Eventually, a friend of mine said to me: ‘Is it a mental problem?'” recalled Demichelis on the Football Psychology Showexternal-link in December 2020.

“I realised that I had trained with Japanese people for so long they were no longer just instructors or masters to me. They were my heroes. Psychologically, you cannot defeat your heroes. It was self-sabotage.”

Demichelis’ questioning prompted an interest in psychology. He eventually completed a PhD in the subject and found work as a consultant to Fininvest, a media conglomerate owned by Berlusconi.

In February 1986 Berlusconi bought AC Milan. Sensing an opportunity, Demichelis arranged a meeting with the club’s new owner. It was a discussion that would his change his life. 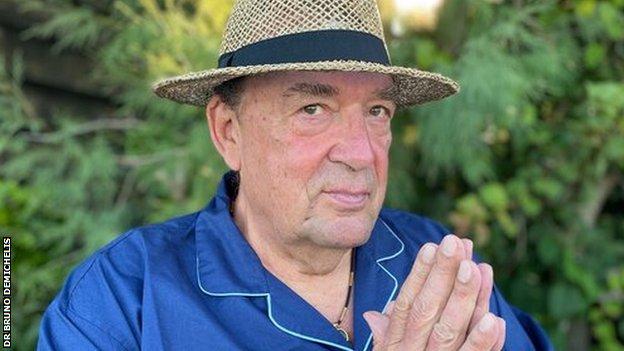 Demichelis would go on to work at Chelsea under Carlo Ancelotti

Demichelis’ pitch was straightforward: you’ve seen the benefits of psychological support in the business world. Now apply them to football. Berlusconi’s response was equally direct.

“The owner asked me if I was a Milan fan,” Demichelis says, now aged 74.

“I said ‘No’. I remember him stepping back a little bit and I thought ‘Oh no’. Then he asked me if I was an Inter fan. I said ‘No’ and he moved a bit further back. Before he asked me the third question, I said ‘I’m not a fan of any team!'”

After a successful start at the club that saw him win the backing of manager Arrigo Sacchi, Demichelis’ services were in high demand. Capitalising on the opportunity, he secured investment for a bespoke psychology laboratory based at Milanello, the club’s training ground. The Mind Room was born.

Its purpose was two-fold. Firstly, it allowed Demichelis to run group sessions, satisfying the Milan squad’s growing appetite for psychological support. Secondly, it provided an opportunity to answer a question he had long wrestled with: how do you attempt to quantify and scientifically support a player’s psychological development, linking this to performances on the pitch?

The Mind Room acted as part-sanctuary, part-mental training ground. Groups of up to eight first-team members – sat in state-of-the-art zero gravity chairs – were hooked-up to equipment including polygraph machines, used to monitor indicators such as blood pressure and breathing rates. A glass divide separated the players and a studious Demichelis, who was looking for physiological signs of a player’s state of mind (or what he termed “objective data in the ‘mental area'”).

For example, if a player said he felt inhibited or lacking in confidence because of a muscle strain, Demichelis would conduct an electromyogram test to measure muscular electrical activity.

The readings enabled him to quantify conditions such as post-game ‘tightness’ and take proportionate remedial action, including carefully calibrated breathing training. In doing so, the Mind Room was not only aiding physical recovery and performance, but also supporting the development of psychological characteristics such as confidence.

Demichelis also used results from Mind Room tests to devise cognitive training exercises. These involved the use of biofeedback devices, such as electrodes, which, when placed on a person’s scalp, can monitor the brain’s electrical activity. By seeing how an individual’s neurons behave, it becomes possible to focus on strengthening synapses associated with skills such as problem-solving. This type of therapy is designed to help players reconfigure the type of negative ‘inner talk’ that can affect them in high-pressure situations. Baresi, Baggio and Donadoni were among those treated.

Demichelis says: “One of them told me, ‘I put the ball down and took three or four steps back. And then a little thought crossed my mind: what if I miss?'” 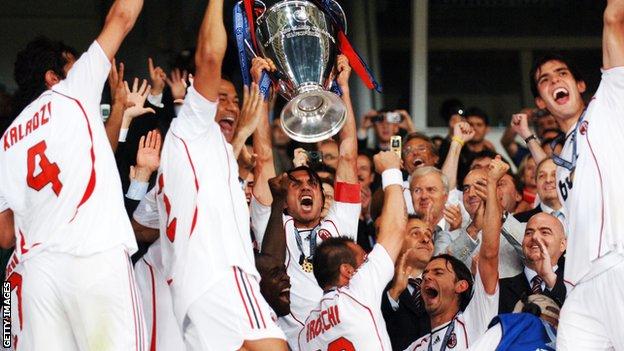 Beyond stress relief and cognitive training, the Mind Room also focused on improving players’ reaction speeds by using response time tests. Participants were presented with two buttons and a pair of bulbs, clicking the left-hand or right-hand button if the corresponding bulb lit up. Flashing arrows – often pointing in the opposite direction to the light which was on – were used to add a greater degree of difficulty to the examination.

While the concept sounds basic, reducing the time it takes for players to respond to rapidly changing on-pitch situations – even by a few tenths of a second – was seen as yet another way in which Milan could extend the careers of stalwarts such as Alessandro Costacurta and Paolo Maldini, who played until they were 41.

“You can’t train 37-year-old players to become physically faster, but you can train them to become faster in analysing situations,” Demichelis says.

“If they can process data more quickly, they can make quicker decisions. That’s why we were able to keep players going.”

Clarence Seedorf was the embodiment of this ethos. Nicknamed ‘The Professor’ by team-mates, Seedorf regularly visited the Mind Room, which was seen as the psychological ‘station’ within a wider physical and mental ‘circuit’, otherwise known as the Milan Lab. The Dutchman’s devotion to self-development would pay off in more ways than one.

Demichelis explains: “The general director of the Milan Lab said to him, ‘Wow, you’re 31, but fitness-wise you’re 26. Your biological age is much, much younger.’

“Seedorf said, ‘Give me that print out’. He went to the CEO and said, ‘Listen to what your lab is saying about me. I am 26, biologically speaking, so extend my contract for four more years.’ And they did!”

Seedorf’s age-defying physiology was perhaps aided by the daily six-minute health checks Demichelis introduced, as part of his role as the club’s scientific coordinator. Combining GPS data with physiological measurements such as heart rate variability, the checks were used to develop a ‘risk scoring’ system. By monitoring changes to a player’s score against a baseline, Demichelis was able to indicate potential susceptibility to injury and proactively apply treatment.

For example, a 10% drop in a player’s score would generate a yellow flag, with a 20% reduction resulting in an orange flag. A decrease of 30% would signal a red flag and preventative treatment in the Mind Room.

According to Demichelis, the methods he helped to introduce contributed to Milan reducing soft tissue injuries by 91% during his time at the club. It is a striking statistic made possible in part by the support the Mind Room received at both boardroom and managerial levels.

Ancelotti and Demichelis’ departure in 2009 effectively ended the Mind Room’s use at Milanello, but the Italian pair established an equivalent base at Stamford Bridge after joining Chelsea.

Petr Cech was among a number of players who jumped at the chance of benefitting from the methods Demichelis deployed in Milan, which professor of psychology Marc Jones descrisbe as genuinely innovative.

“The Mind Room was breaking new ground in terms of its integration into the training environment,” says Jones, who has worked with a number of football clubs.

“The fact there was a physical presence within Milan’s training ground was, without doubt, the exception rather than the rule.”

Jones namechecks John Syer and Chris Connolly – who both provided psychological support for Tottenham players in the early 1980s – as quasi-forerunners of Demichelis, but you have to look back to 1958 and Brazil’s World Cup-winning psychologist Joao Carvalhaes to find a similarly decorated example of a laboratory dedicated to cognitive skills training.

While Milan’s trophy haul goes some way to illustrating the impact of the Mind Room, the public testimony of the managers who backed Demichelis’ brainchild is perhaps as telling. In his book ‘The Immortals’, Sacchi’s appreciation of the laboratory is such that he describes Demichelis as “a psychologist whom I needed more than the players”. Ancelotti, meanwhile, has spoken of the “value” Demichelis added to Chelsea “with his experience of the Milan Lab”.

The appreciation appears to be echoed by the players Demichelis worked with. In 2014, after his appointment as Milan manager, Seedorf lured his former colleague back to the San Siro.

The reunion was short-lived – Seedorf’s managerial reign ended after four months – but the Mind Room’s long-term legacy is well established. Epitomising the innovation that characterised Milan’s off-pitch and on-pitch operation during the 1990s, the root of its success lay as much in an age-old premise as it did on modern technology, according to its founder.

“We improved skills that are very well defined: recovery, attention, stamina, speed in analysing situations and making decisions,” says Demichelis. “The difference is that our players were able to deploy these skills under pressure.

“As a player, you need to have this ability if you’re going to take a penalty in the World Cup final.”

Finland’s leader has a steely side: How the world’s youngest (and most modern) Prime Minister

How to Manage your Business Finances Effectively?