Here We Go Again: Biden Administration Buys Millions of Doses of Monkeypox Vaccine After Case is Confirmed in Massachusetts

The breach of a draft Supreme Court majority opinion striking down Roe reshuffled Democrats’ hand in a Senate defense dominated for weeks by inflation and border security. Abortion rights is now a flashpoint for the four Democratic senators running the cycle’s most hotly contested races: Cortez Masto, Maggie Hassan of New Hampshire, Raphael Warnock of Georgia and Mark Kelly of Arizona.

It’s an opportunity for some of the four to get off the back foot as they hammer their GOP opponents for opposing Roe v. Wade. But it’s also a challenge for the entire Democratic Party: Can it sustain its message for the next six months in the face of rising prices, increased border crossings and a volatile economy?

Democrats struggled to sell a 2016 campaign built around the GOP’s blockade of their president’s Supreme Court pick, though they say this time around the consequences of a conservative bench are no longer theoretical. Republicans are playing down the ramifications. Laxalt, Nevada’s former GOP attorney general, said that while ending Roe would constitute a “historic victory,” the issue is “settled law” in the state.

Roughly 2,500 miles from Cortez Masto’s Silver State, Hassan is warning of an even more dire future after the court’s final ruling, expected next month. New Hampshire lacks the backstop that Nevada has, meaning the state or Congress could quickly move to restrict abortion access should the Supreme Court overturn Roe.

“If my opponents get this seat, they will support the kind of national abortion ban that’s now being talked about,” Hassan warns. “There are no protections in New Hampshire right now.”

Notably, one of Hassan’s potential opponents is state Senate President Chuck Morse, who helped pass a 24-week abortion ban last year. Like Laxalt, Morse minimized the implications of striking down Roe because “we settled the law in New Hampshire that permits abortions in the first six months while banning late term and partial birth abortions in the last 12 weeks of pregnancy.”

“Maggie Hassan is the only one out of touch when she champions late term and partial birth abortions,” he said in a statement for this story.

Both Hassan and Cortez Masto said that their races will not be decided by abortion alone, but any increase in turnout and enthusiasm in a midterm election will be vital to their political survival. Each won their seats by small margins in 2016, with Hassan winning by roughly 1,000 votes and Cortez Masto prevailing by about 2 percentage points.

Nevada and New Hampshire are two of the states where abortion access rights poll best in the country. The issue is a bit more complex elsewhere, such as historically red Georgia, where Warnock is positioning himself as a rock-ribbed defender of abortion rights. He even suggested the Senate should explore gutting the 60-vote threshold after next week’s vote on codifying Roe fails.

“Our responsibility as legislators is to do everything we can to pass the Women’s Health Protection Act,” Warnock said in an interview. “No Senate procedure or Senate rule is more important than people’s constitutional rights.” 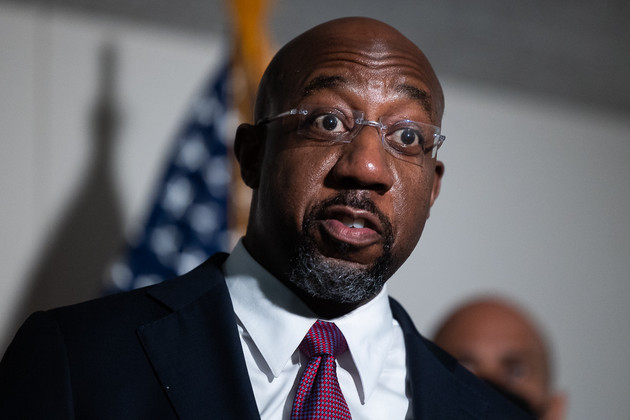 Neither party has been able to put together 60 votes to pass either abortion restrictions or abortion protections in recent years. Kelly said striking down Roe amounts to a “giant leap backwards” for the United States but also conceded the party has a “math problem” in preserving abortion access on a national scale. He said it was too early to say whether abortion or some other issue might dominate his campaign.

Nonetheless, Republicans are beginning to push back against Democrats’ dire warnings of how the GOP would pursue federal abortion restrictions if they take back control of Washington in the future. The National Republican Senatorial Committee circulated polling on Thursday intended to tamp down on the idea that voters side with Democrats on abortion rights.

In an interview, NRSC Chair Rick Scott (R-Fla.) said “the country is not where the Democrats are” and predicted abortion would not dominate the political landscape: “Inflation’s going to be the biggest issue, the border and crime.”

Given the political environment and which Senate seats are up for grabs this year, Democrats are mostly focused on getting their incumbents re-elected — a move that would deliver Democrats the majority for another two years. The overturning of Roe would give them another argument to that end: that the loss of Kelly, Warnock, Cortez Masto or Hassan would mean a higher chance that Republicans pass new abortion restrictions in the future. It’s possible Republicans could secure a filibuster-proof majority if Democrats suffer bad losses this year and in 2024.

With the Senate evenly divided, re-electing all four incumbents is the easiest way for Democrats to keep the majority. Just two current Republican seats seem truly in play for Democrats at the moment — those of retiring Pennsylvania Sen. Pat Toomey and incumbent Wisconsin Sen. Ron Johnson.

One of Johnson’s Democratic opponents, state treasurer Sarah Godlewski, filmed an ad in front of the Supreme Court arguing Johnson is getting “exactly what he wants” in overturning Roe v. Wade. Johnson shot back in an interview that “the political ramifications of this thing are being overstated.”

“In Wisconsin, it’s like 50/50. It’s just never been an issue for me in Wisconsin,” Johnson said. “It hasn’t even come up in debates, I’ve run twice. This will probably be the first time it will come up at all.”

The future of Roe v. Wade

The Supreme Court has voted to strike down the landmark Roe v. Wade decision, according to an initial draft majority opinion obtained by POLITICO.

If Democrats get their way, the issue will come up repeatedly for the next six months. And in places like New Hampshire and Nevada, Democrats don’t believe it’s anywhere close to a 50/50 issue.

Sen. Jeanne Shaheen (D-N.H.) said that “New Hampshire’s one of the most pro-choice states in the country” and predicted abortion rights will now be a “major issue” in Hassan’s reelection campaign. Hassan’s already done more than a half-dozen interviews on the subject and said in a Wednesday fundraising email: “The stakes have never been higher: the Supreme Court is on the verge of overturning Roe v. Wade.”

And Cortez Masto, who chaired the Democrats’ campaign arm in the 2020 cycle that earned them the majority, said that abortion rights will resonate far beyond a couple of Senate battlegrounds.

“I wouldn’t underestimate this issue for any woman and men who support [abortion rights] across the country, to be galvanized, to turn out. Whether they voted in the past or not,” Cortez Masto said. “This is an issue that, to me, crosses state boundaries.”

Have a better 2022 with these tech resolutions

Father and son hospitalized after intervening in attack on Asian woman