The City University of New York will spend $1 million this year to prevent a “hole in the ground” from flooding at the site of a long-stalled construction project, The Post has learned.

The boondoggle is a result of government dysfunction after CUNY dug a foundation for a new $300 million nursing school facility — that it never obtained the funding to actually build.

The school hoped to erect the building for its Hunter College nursing and science program, next to Memorial Sloan Kettering’s outpatient facility on the Upper East Side.

But the funding got tied up because of a dispute with state officials under former Gov. Andrew Cuomo.

The construction site, located on a swath of land at East 73rd and 74th Streets between York Avenue and the FDR Drive, is boarded up with green fencing, and there is cement covering up the “bowl tub” foundation.

“It’s a hole in the ground that requires spending taxpayer dollars to prevent water damage. It’s an embarrassment for Hunter, CUNY and state officials,” a CUNY insider said.

Sources said the project got off to a bad start when then-Mayor Michael Bloomberg and CUNY officials announced the joint Sloan-Kettering/CUNY facility in 2012 — without inviting or including Cuomo. The then-governor’s name was not listed on the press release.

Most of CUNY’s funding comes from the state and particularly so for capital construction projects.

This was supposed to be the location of the new Hunter College nursing and science program. J.C.Rice

The Post first reported on the stalled project three years ago. At the time, CUNY advocates and Cuomo officials blamed each other for the snafu.

CUNY is now on the hook to protect the “foundation and bathtub, which must be dewatered and maintained until construction of a new building begins” to comply with city building codes, according to a request for proposals the university has sent to bidders.

The annual maintenance cost is $1 million, a CUNY spokesman confirmed.

A CUNY rep said the plan remains in limbo, and that it must spend money to maintain the site.

“CUNY is reviewing and updating the current plan to determine appropriate next steps,” the spokesman said. 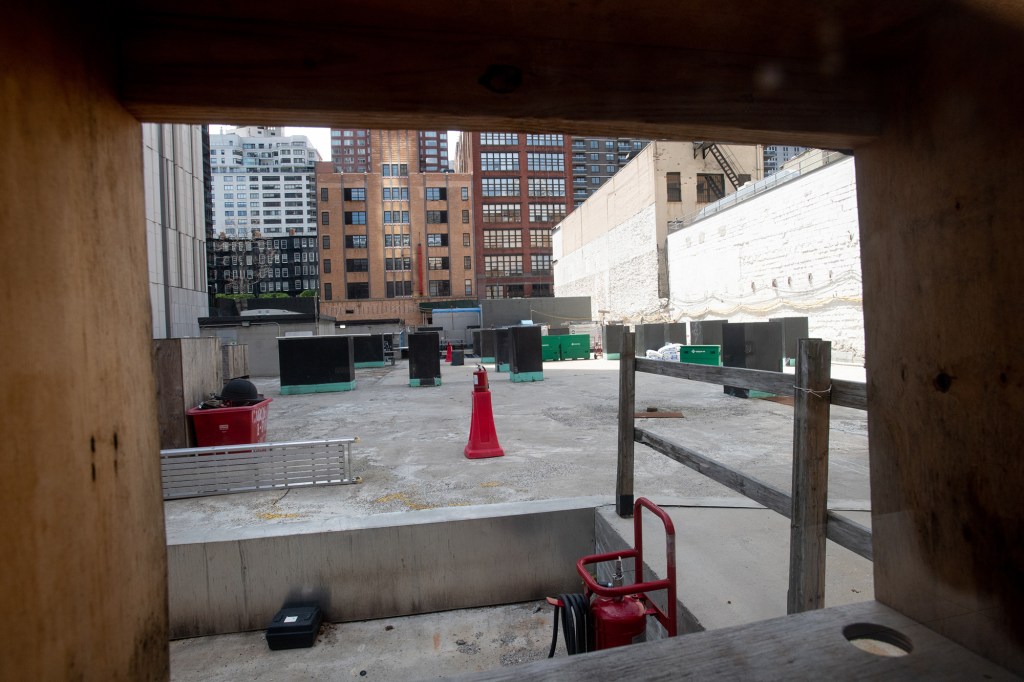 The area needs to be repaired to prevent water damage. J.C.Rice

Asked if funding has been secured in this year’s state budget to erect the nursing school, the rep replied, “No.”

The recently-approved state budget includes $500 million for all new CUNY capital construction, but the money has not yet been earmarked, sources said.

The city gave CUNY/Hunter College and Memorial Sloan Kettering the property in exchange for the title to property at Hunter College’s Brookdale campus on East 25th Street and First Avenue.

CUNY/Hunter considered the existing nursing school building in Turtle Bay antiquated and had pushed for the chance to build a new site on the Upper East Side.

Councilwoman Gale Brewer, who was then the Manhattan borough president, pushed for the project along with Hunter College president Jennifer Raab — and blamed Cuomo’s team for the debacle.

“What we have is a hole in the ground that sits there for years,”  Brewer fumed on Sunday.

“Here is what I care about — we need nurses in this city. CUNY needs that space.”

A spokesman for state budget director Robert Mujica, who also is a trustee on CUNY’s governing board, said in a statement: “CUNY is developing a plan for this project and we look forward to reviewing it at the appropriate time.”

Brewer said the cost of the project has likely escalated by hundreds of millions of dollars because of delays.

Meanwhile, Upper East Side neighbors said they’re not pleased at having an abandoned construction site nearby.

“I’ve honestly never noticed it but I don’t like the fact that it’s sitting there and not being used for anything productive,” said DeiVonte Freeman-Jackson, 24.

“Sounds like New York City. It’s corrupt from top to bottom,” she said.

“It doesn’t surprise me. I’m sure that’s not the only site in the city that has this problem.”

How to Create an Editorial Calendar in Google Calendar [Free Templates]

On Camera, Congress Leader Runs From Cop. His Reply On Getting Trolled.

LADYGUNN – VON IS NO TINY BOY