One of the most popular topics of debate within the crypto community revolves around the Bitcoin (BTC) four-year halving cycle and the effect it has on the long-term price of the top cryptocurrency.

Bitcoin price failed to hit the long-predicted $100,000 level in 2021 and many crypto analysts now find themselves wondering about the outlook for the next six to 12 months.

Currently, BTC price trades below $40,000 and various technical analysis metrics suggest that further downside is more likely that a recovery to the $40,000 to $45,000 range. Let’s take a look at what analysts’ views are on Bitcoin’s longer-term prospects.

Bitcoin could bottom in November or December

A general overview of the four-year cycle theory was discussed in a Twitter thread by crypto analyst and pseudonymous Twitter user “Wolves of Crypto,” whose analysis indicates that “the most probable bear market bottom for Bitcoin will take place in November/December 2022.”

This projection assumes that the peak BTC price of $68,789 back on November 10, 2021 marked the high of the last cycle and that the market is currently in the corrective phase typically seen after a cycle top.

“The 200–week SMA has been the long-tested bear market bottom indicator for Bitcoin, and hence, the bottom will likely be placed at ~$24,000.”

Should this model play out, the price of BTC will breakout above its previous all-time high sometime around August or September of 2023.

The possibility that the bottom in BTC could come before the end of 2022 was hinted at by Willy Woo, an independent market analyst who posted the following chart suggesting that the “Orange coin seems a bit undervalued here.” 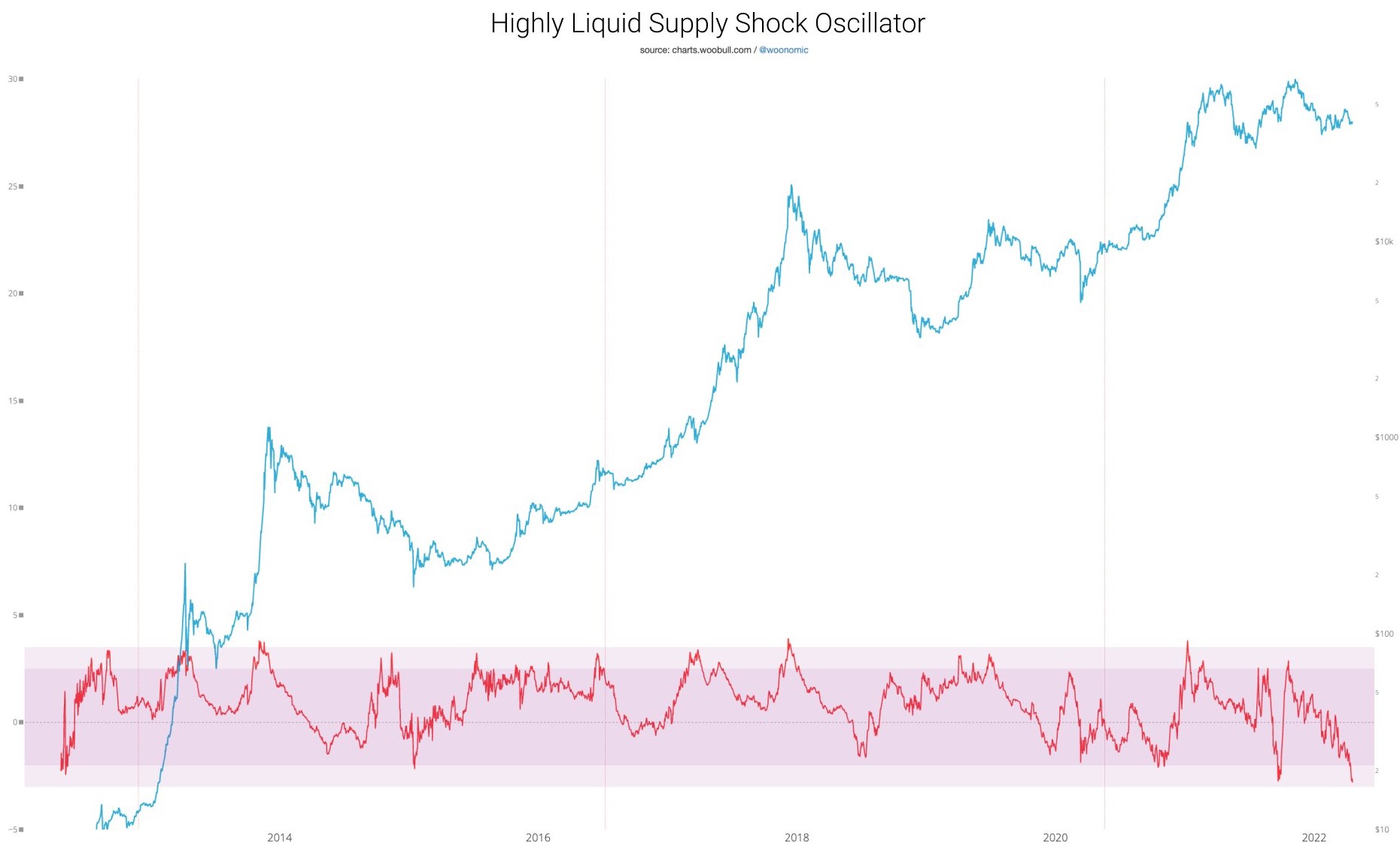 The “Highly Liquid Supply Shock” metric quantifies on-chain demand and supply, and shows its relative movement in standard deviations from the long-term average.

As shown on the chart above, each time the oscillator dipped as low as the current reading, the price of BTC entered a sharp rally shortly thereafter.

“Not a bad time for investors to wait for the law of mean reversion to play out.”

Related: Bitcoin is 40%+ down from its ATH, but on-chain analysts say it’s ‘starting to bottom out’

Bitcoin price is at a mid-term low

Many analysts believe that BTC could be in an optimal accumulation range, a point touched on by crypto market analyst Philip Swift. According to Swift, the active address sentiment indicator (AASI) suggests that BTC is in a buy zone. 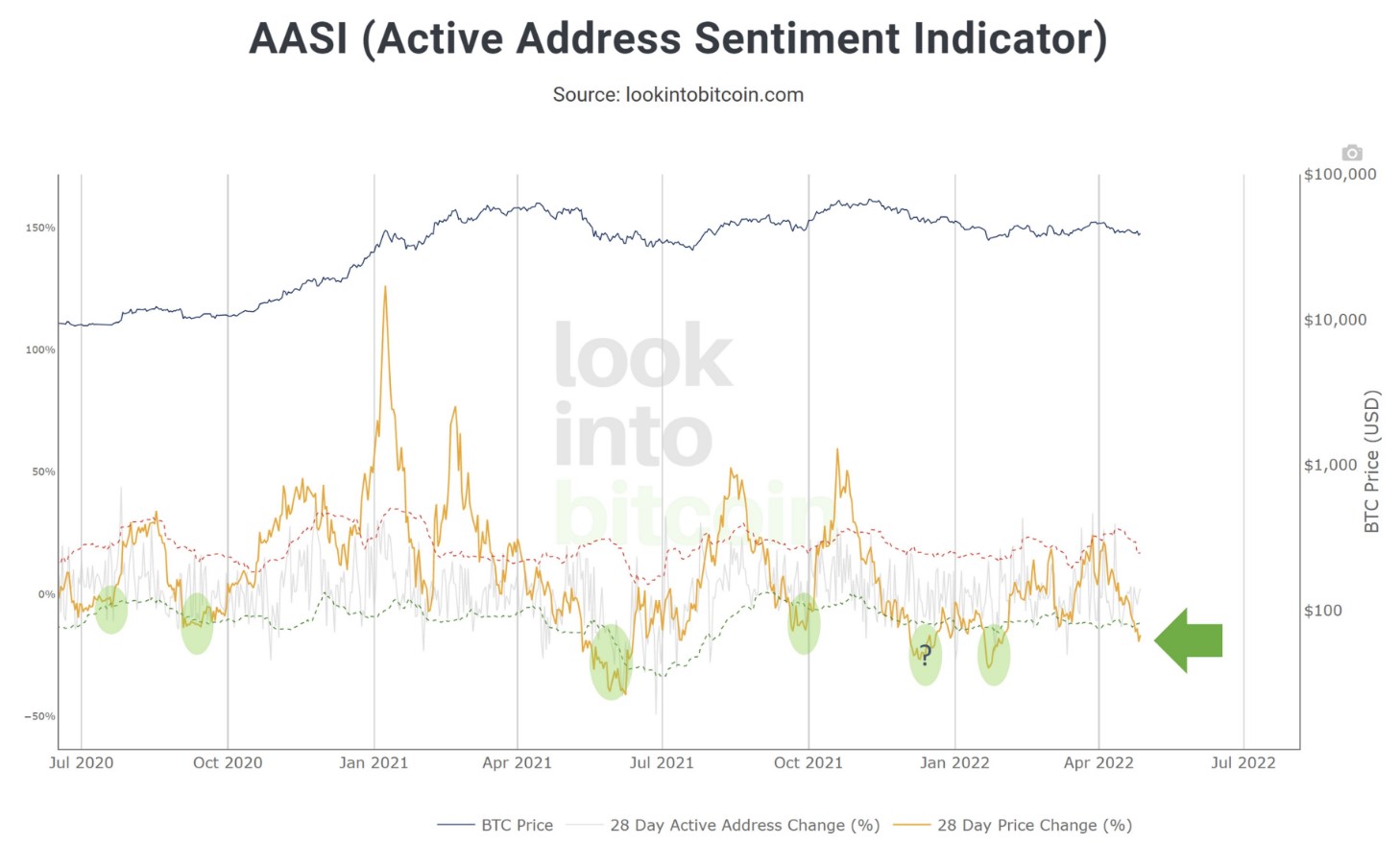 According to Swift, the AASI is currently “back in the green zone,” which suggests that the “Bitcoin price change is at a sensible level relative to active address change.”

“This tool has a good hit rate across bull and bear markets for signaling a mid-term low.”

Indeed, a survey of the previous instances where the AASI hit levels similar to its current reading shows that the price of BTC hit its low point around the same time and proceeded to climb higher in the following weeks and months.

Generally, it appears as though Bitcoin’s price action is keeping in-line with the previously established four-year cycle, albeit to a lesser percentage increase than expected.