Russia continued making slow, grinding progress on Wednesday, taking five settlements, repulsed on six other approaches, and pushing into some of the larger towns. Ukrainian resistance is stiff.

🇷🇺 have taken control of Zarichne and has continued to advance in Yampil’.

🇺🇦 blew a bridge near Yampil’, likely the bridge over the Siverskyi Donets river in the direction of Sivers’k

I won’t belabor the point I’ve made repeatedly—how Russia guilty once again of spreading its forces thin across way too many lines of attack. Yes, they’ve had some tactical victories, taking a town here or there, but they are still failing their strategic goal of taking the entire Donbas region and building a land bridge that extends all the way across Ukraine’s south, through Odesa, and on to Moldova’s Transnistria region.

Remember, Russia had loads of tactical victories around Kyiv, Sumy, Chernihiv, and Kharkiv. How’d that turn out for them strategically?

Now, Russia is having trouble finishing the job in Mariupol, much less take Donbas. It’s been two weeks since Russia announced their big Donbas offensive, yet Russia has managed to push only ~22 kilometers (14 miles) to the south and west. That leaves just  another 240-320 kilometers (~150-200 miles) of roads to go to close the gap to the south (depending on the route), not to mention all the territory in the middle, which at around 5,000 square miles, would entirely fit the state of Connecticut.

Uh, what’s Russia doing pushing west of Izyum, away from all that Donbas territory it’s supposed to be focused on?

Russia has taken just a sliver of all that territory, and it is already distracted, pushing in all sorts of different directions that aren’t Donbas. As the Institute for the Study of War reported today, their advances today to the west of Izyum “takes Russian forces away from their main objective of Donetsk and Luhansk Oblasts.” So great, congrats Russia on your small tactical gains! But strategically, they remain a mess, and what meager progress they’ve made has come at a horrifying cost. Don’t take it from me, take it from Igor Girkin, the Russian nationalist who ran the separatists’ 2014 war effort. He posts regular video updates on Telegram, where is is losing his mind over Russia’s current progress.

Main battles are taking place south of Izyum, and between Uhledar and Huliapole. Can the Russian army destroy the Donetsk group of the enemy using the existing forces? For me there is no obvious answer. I don’t know what forces are concentrated, what is their moral spirit, how are they equipped and trained, what aviation and artillery support is available.

But in the last three days there was practically zero advancement of the Russian forces north of Izyum, only tactical successes in some places. In the south, we took a few localities but the enemy frontline is not broken through. Witnesses say the artillery and aviation work tremendously, destroying resistance as soon as it emerges. This is WW1 tactic which any way doesn’t lead to any quick results.

As I said earlier time is of the essence for a quick victory of the Ukraine which finishes its 3rd mobilization stage, in total around 300,000 people […] If Ukraine manages to create 10 divisions, 100,000 troops, or 50 BTGs, then this […] force will be capable of of cardinally reversing the course of the combat action […]

So I believe if the operations drags down, if the Ukrainian forces are not destroyed in 1-1.5 months, then the battle could change dramatically, and the enemy will be able to seize the advantage, and it’s possible they will do it.

Everyone points to Russia’s “tactical successes,” but one must only look at a map, at the Oryx list of confirmed casualties, and at the pace of the campaign to know that taking a village here or there is of little value if it’s not working toward the broader strategic goal.  A week ago, Girkin was even more pessimistic.

In conditions were Russian troops will have to storm one city agglomeration after another, number of troops comes to the foreground. And in this regard, neither [Russian] nor [separatist forces] have a serious advantage, unfortunately.

Let’s imagine that the first line of defense of [Ukrainian armed forces] south of Izyum and near Hulliapole is broken and our forces begin offensive in convergent directions, can they quickly link up in deep Ukrainian rears, creating two encirclement  rings (inner and outer)? With a guarantee that the enemy won’t break them immediately and won’t create their own ‘salients’ for the advancing forces? […]

I doubt it. Why? Because for that you need A LOT of detachments aimed not only for breaking through but also for firmly establishing in the territories […]

So, after a certain time, in this area, the same situation will repeat as in Rubezhnoe-Severodonetsk, Popasnaya, Avdeevka and Maryanka, where united forces are advancing extremely slowly and with huge losses (especially among the infantry), or not moving at all (Avdeevka).

The separatist’s former top commander has taken stock of the current battlefield situation, and concludes that their manpower losses are unsustainable. Pretending that Russia has 180,000 troops in the region, which they don’t, and ignoring that most would be logistical support, that would still only be 30 soldiers (a platoon!) for every square mile of that Donbas region that remains to be conquered. Yeah, that’s a simplistic argument, but it points to how few forces they have for that Connecticut-sized region. Meanwhile, they don’t even take care of the soldiers they have, treating them as expendable cannon fodder: 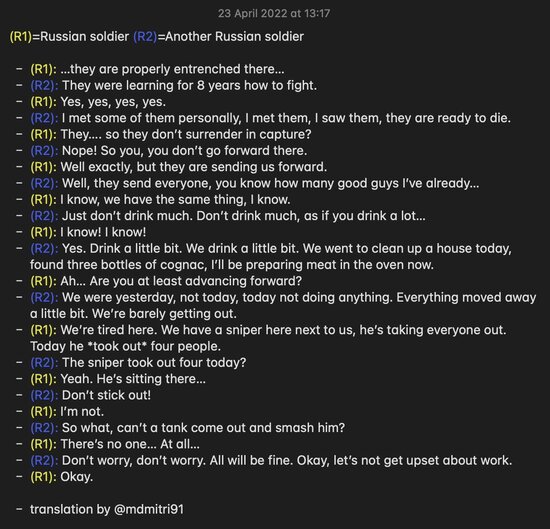 Here is another Russian soldier’s account of the Donbas front lines in late March and early April. Follow the link and read the whole thing (same with the Girkin links above). It’s breathtaking.

By mid-April there were a couple of men left of our “pre-war” company [150 troops in an infantry company] . Volunteers and reservists were already being sent to the battle. Volunteers in masses were with experience of 2014-2015, but here it is absolutely other war and their experience does not help anything. And the reservists are miners caught on the streets without the slightest experience. Nobody cares. Put your submachine gun in your hands and go forward under the mortars. There was a catastrophic shortage of men, fighters were not allowed to leave the front line for a month or more. Many went nuts from such loads. Some began to drink heavily, fortunately there was no problem with booze at the front. Mathematically there was almost no chance of getting out alive and uninjured. The longer you stay there, the less chance you have. Of those I was friends with or shared bread with, eight people died in a fortnight. The rest were wounded or shell-shocked. Within a week, three company officers had changed – two were killed. There were no company-platoon level officers left at all.

Igor Girkin says the separatist-held territories of Donbas are tapped out, no more troops to give. Indeed, they’ve conscripted men up to the age of 60. There are only so many more Chechens to send, and they don’t seem too excited to be bearing the brunt of Russia’s war.

Russia executed 2 Chechens who refused to go to war in Ukraine on 25 April, Musa Taipov, niece of Dzokhar Dudaev and member of the Presidium of the Government of the Chechen Republic of Ichkeria and the official representative of the CRI in France, says – our sources

The May 9 Victory Parade should prove an inflection point: does Vladimir Putin use the occasion to call for a mass mobilization to bolster the war effort, or will he keep pretending that it’s merely a “limited military operation” that remains splendidly on track, dooming the entire effort? Ukraine’s regular army and Territorial Defense Forces have bought time for those 300,000 reservists out west to train and get equipped. A couple more months, and they’ll be riding into battle in Polish T-72s, American and European armored personnel carriers, and lots of sweet, sweet, modern artillery. How will Russia respond, even as it attrits its existing forces on the daily?

Ukraine’s recent raids in Belgorod and Kursk would’ve been great fodder to gin up war fervor amongst the Russian populace. Instead, Russian state propaganda passively stated that the facilities merely “caught fire.” Curious, isn’t it? Stunningly, Putin is afraid to call for shared sacrifice, even as state propaganda ramps up the hysteria on the nightly. Apparently, it’s easier to support war when it’s the poor regions and foreigners doing the dying, rather than Moscow and St. Petersburg.

Russian state TV is raging about WWIII and an inevitable escalation over Russia’s invasion of Ukraine. Citizens are being primed to believe that even the worst outcome is a good thing, because those dying for the Motherland will skyrocket to paradise.https://t.co/PzAt9jCBLt pic.twitter.com/DK2mXXWdfe

In almost three months of fighting, the frontline near the #Donetsk International Airport has not moved an inch. Towns like Avdiivka and Pisky remain in a purgatory state of nonstop fighting since 2014.

There was a silly little skit I had to do in camp when I was a kid, looking for a lost ring in the dark, near a campfire. Everyone looks and looks and looks until someone asks where the ring was lost? Well, it was over there, pointing to the woods. So why are we looking over here? Because the light is better!

Apparently, the light is better west of Izyum than anywhere where Ukrainians actually expect Russians to attack.

America’s Flu-Shot Problem Is Also Its Next COVID Problem