North Korean leader Kim Jong-un has ratcheted up his nuclear rhetoric, vowing to accelerate development of the country’s weapons of mass destruction and to deploy them offensively if DPRK’s “fundamental interests” are violated.

“We will continue to take measures for further developing the nuclear forces of our state at the fastest possible speed,” North Korean state-run media outlet KCNA quoted Kim as saying at a military parade on Monday night in Pyongyang. He added that North Korea’s nuclear forces must be prepared for deployment “at any time.”

The country’s nuclear weapons could be used proactively if North Korea is threatened, Kim told the crowd of troops and spectators. Monday’s parade featured missiles capable of striking the country’s adversaries, the state media outlet said. Those weapons included intercontinental ballistic missiles (ICBMs) that could carry a nuclear warhead to the US mainland and solid-fuel rockets that could be used against South Korea or Japan. 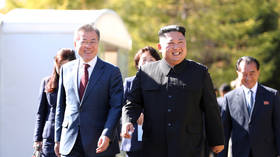 “The fundamental mission of our nuclear forces is to deter a war, but our nukes can never be confined to the single mission of war deterrent even at a time when a situation we are not desirous of at all is created on this land,” Kim said. “If any forces try to violate the fundamental interests of our state, our nuclear forces will have to decisively accomplish its unexpected second mission.” Such a strike would leave any enemy forces dead, he added.

Kim’s comments came amid increased geopolitical tensions – the US and other NATO members are rushing billions of dollars in weapons to Kiev and trying to devastate the Russian economy through sanctions to punish Moscow for its Ukraine offensive. On top of that, a leadership transition is taking place in Seoul. South Korean President-elect Yoon Suk-yeol is scheduled to take office on May 10 and has vowed to take a hard line against North Korea, declaring the need to “annihilate communism.”

Yoon’s predecessor, President Moon Jae-in, exchanged farewell letters with Kim this month after years of trying to negotiate a peace deal with North Korea. The two Koreas technically remain at war, as their bloody conflict ended in July 1953 with an armistice, not a peace treaty.

North Korea has conducted more than a dozen missile tests this year, including the purported launch last month of its newest and biggest ICBM, the Hwasong-17. Earlier this month, Kim oversaw the test-firing of a new guided weapon system that Pyongyang claims will enhance the capabilities of its tactical nukes.

How to Outreach B2B Prospects

Why does wood catch fire, but metal doesn’t?