French President Emmanuel Macron was among the first foreign leaders to congratulate Joe Biden on his contested victory over Donald Trump back in November 2020, but he apparently wasn’t around to take the call when his US counterpart tried to return the favor after his re-election victory on Sunday night.

“I tried to talk to Emmanuel Macron last night,” Biden told reporters on Monday. “I spoke to his staff, and he was at the Eiffel Tower having a good time. And I’m going to be talking to him today.”

Other well-wishers had better luck, as Ukrainian President Volodymyr Zelensky was reportedly among the European leaders who got through to Macron on Sunday. Biden and other NATO heads of state were quick to congratulate the French leader on Twitter, as many feared the implications of nationalist candidate Marine Le Pen defeating Macron. As it turned out, the incumbent beat his Eurosceptic rival handily, by a margin of 58.5% to 41.5%.

“Congratulations to Emmanuel Macron on his re-election,” Biden tweeted on Sunday. “France is our oldest ally and a key partner in addressing global challenges. I look forward to our continued close cooperation – including on supporting Ukraine, defending democracy and countering climate change.”

Congratulations to @EmmanuelMacron on his re-election. France is our oldest ally and a key partner in addressing global challenges. I look forward to our continued close cooperation — including on supporting Ukraine, defending democracy, and countering climate change.

Biden and Macron finally connected by phone on Monday. The two leaders haven’t seen completely eye-to-eye on responding to Russia’s military offensive against Ukraine. Macron has called for dialogue with Moscow to help bring peace, and he has chosen not to follow his US counterpart and other NATO leaders in branding Putin a “war criminal” and accusing Russian forces of committing “genocide.” In fact, he suggested earlier this month that such rhetoric isn’t conducive to ending the conflict in Ukraine. 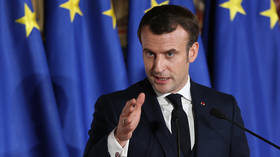 “Genocide has a meaning,” Macron said. “The Ukrainian people and Russian people are brotherly people. It’s madness what’s happening today. It’s unbelievable brutality and a return to war in Europe. But at the same time, I look at the facts, and I want to continue to try the utmost to be able to stop the war and restore peace. I’m not sure if the escalation of words serves our cause.”

Late last month, after Biden called Putin a “butcher” and said he “cannot remain in power,” Macron countered that leaders must use restraint in speaking about the crisis. “We want to stop the war that Russia has launched in Ukraine without escalation – that’s the objective,” Macron said. “If this is what we want to do, we should not escalate things – neither with words nor actions.”

The two leaders also clashed last year, such as when Macron admonished Biden for “abandoning” pro-Western allies in Afghanistan and argued that the countries had a “moral responsibility” toward the Afghan people – remarks that were scrubbed from a White House summary of the conversation. Macron’s administration last September recalled its ambassador to Washington and accused Biden of behaving like Trump after Washington partnered with the UK to persuade Australia to scrap a submarine deal with France and instead buy their vessels.

White House calls to foreign leaders are typically arranged by staffers to avoid unscripted moments or gaffes. In March, leaders in Saudi Arabia and the United Arab Emirates reportedly declined to take calls from Biden, who was expected to urge them to ramp up oil production amid the Russia-Ukraine conflict.

A Shrinking Band of Southern Nurses, Neck-Deep in Another Covid Wave

How COVID Is Changing the Study of Human Behavior