Mariupol holds (and is resupplied!), and is Russia really reaching for Kryvyi Rih?

Today was day 60 of this war. Two full months. Feels like a lifetime out here, in safety. Imagine what it must be like in Ukraine. (Even my own experience in El Salvador’s civil war was nowhere near the intensity of this all-out conventional war.)

Russian forces have no hope of taking Azovstal metal factory in Mariupol, literally designed to withstand a nuclear attack. I wondered on Friday whether Ukraine could supply defenders from the the Azov Sea on the factory’s southern approach, and it turns out that’s exactly what they’re doing:

Secretary of the National Security Council Alexei Danilov said that the supplies of the necessary to Mariupol took place with the help of helicopters, the defenders of the city asked only for ammunition.

The city’s defenders had plenty of time to stock the vast network of tunnels under the factor with food and water, and this report confirms that the only thing they’re lacking is ammunition. Too bad helicopters can’t safely land, would be nice to evacuate the children trapped in the complex. Not to mention, the last time Russia was able to interdict a helicopter run to the city, they shot two of the birds down. The kids are likely safer in the tunnels, for the time being.

If you haven’t seen this video yet, it provides great context of the scale of the factory. It covers four square miles, and with a perimeter measuring around nine miles and all those tunnels leading to who knows where, it’ll be extremely difficult for a reduced Russian presence to corral its defenders. As is, Russia was trumpeting the capture of a couple of warehouses on the factory’s perimeter. Okay, great! Only about a thousand more to go.

Down in southern Ukraine, the most curious thing is happening.

Oleksandr Vilkul, the head of the Kryvyi Rih’s military administration, said that the offensive is expected in the coming days, but the city is “fully prepared.”

Remember claims that Russia would march on Dnipro, and I was like lol no? Same as claims that Russia would attack Odesa via amphibious landing, and that Belarus was going to invade western Ukraine? All of that was nonsense, virtual impossibilities, and you can add this to that list. No matter how much Vladimir Putin might want this symbolic strike, it just ain’t gonna happen. The Russian push toward Kryvyi Rih has always been a bizarre side-show in this war, never fully resourced or considered. Ukrainian defenders stopped the original push north well short of the city, and Russia has actually lost ground the last few weeks. 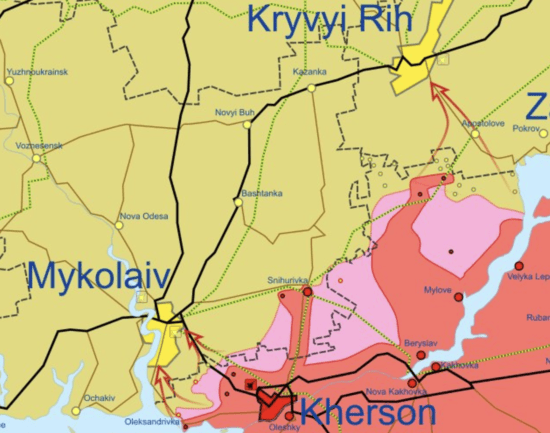 It isn’t a particularly strategic operation, either. Capturing Kryvyi Rih wouldn’t cut any key supply lines, or trap Ukrainian forces, or accomplish anything of military value. Kryvyi Rih has a population of around 635,000 people (comparable to Memphis or Detroit). If Russia had any capability to capture urban centers, they’d be working on Mykolaiv—the gateway to the extremely strategic Black Sea port city of Odesa! Instead, they’re still struggling to pacify Mariupol, a city with 200,000 less people and smaller footprint, which Russia has surrounded since the start of the war.

Meanwhile, the tug-of-war near Kherson appears to be moving in Ukraine’s direction, at least for the moment. Ukraine claims the liberation of 13 settlements in the northern approach toward Kherson.

#Ukraine Armed Forces returned control over 5 settlements in the southern #Mykolayiv province in addition to 8 settlements liberated in neighboring #Kherson province in previous days. (From the evening April 24 report of Gen. Staff of UAF.)

Note, the terrain here is flat and unforgiving for offensive operations. Both sides have gone back and forth, as incoming artillery forces the abandonment of forward positions. This is why armored personnel carriers will work wonders in this region—allowing Ukrainian infantry to move through artillery barrages, protected from the shrapnel that would otherwise chew up unprotected infantry.

Ukraine also claims they killed two generals in an attack on Kherson airport—a claim so fantastical that it seems beyond belief. Yet Russia has consistently moved forces back to that airport for subsequent elimination. So … who knows? Russia hasn’t hidden the funerals for its fallen generals, so we’ll know soon enough if it’s true.

Several Kherson locals claimed on Telegram that they could hear fighting outside the city, and at least one video I was unable to confirm claimed Russian artillery was firing from inside Kherson, which means Ukrainian troops were close enough to engage.  This is all rumor until official confirmation or geolocated video evidence. But regardless, we do know Ukraine is advancing for the time being.

So what the hell is Russia thinking keeping those forces near Kryvyi Rih, much less massing troops for a new offensive? Is the rationale really as stupid as a “Zelenskyy is from there lol” troll? Meanwhile, Russia simply doesn’t learn from its past mistakes, reaching toward a distant objective while leaving its long supply lines exposed near a Ukrainian-held stronghold (Mykolaiv).

Or maybe it’s all a feint to fix Ukrainian forces in place. Russia pretends to have designs on Kryvyi Rih, and Ukraine rushes troops to defend. But this is all so improbable, I’d guess there’s nothing there to defend beyond Territorial Defense forces. Really no reason for anything heavier. Just a bunch of locals with Javelin and NLAWS should be enough. My guess is no such attack ever materializes.

There are oblique reports on a Ukrainian resistance in the south, particularly around Melitopol, but increasingly in Kherson as well. Russia inadvertently confirmed those reports with this video:

Ukrainian intelligence claims that the Melitopol resistance has killed around 70 Russians, which would average out to around 1-2 per day since the city was occupied. Among the claim successes has been the sabotage of rail lines from Crimea supplying Russians around Mariupol. In Kherson, we’ve heard about the assassination of at least two collaborators. Working with the Russians is not a healthy profession.

Out east, Russia pressed on the entire Donbas front, and finally found a meaningful hole in Ukraine’s defensive lines. 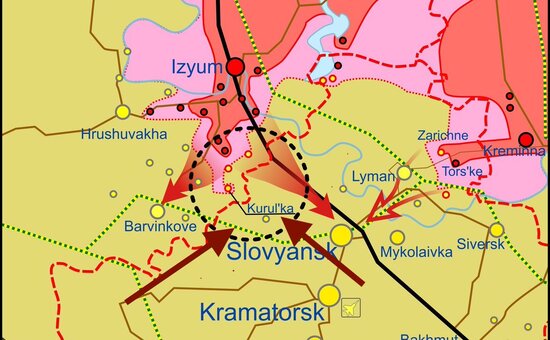 Russian troops bypassed a couple cities south of Izyum to surprise-take the settlement of Kurulka, roughly five miles north of a critical rail line supplying Russian forces along that entire front. (Honestly, Russia should be bombing that rail infrastructure instead of targeting civilian apartment complexes, but there’s a reason they’re losing this war.)

Russia is pressing on the settlement of Pashkove, the last line of defense before Russia physically tramples that rail line. I’d expect a furious Ukrainian response to hold Pashkove and retake lost ground over the next couple of days. Russia notched additional minor gains all around the front, but none anywhere near as strategically valuable or significant as Kurulka. Ukraine claimed heavy Russian losses throughout those advances. While video usually takes a few days to filter out, the claims are believable given the trends in this war, and in the Donbas front over the past week since everyone screamed about Russia’s big offensive.

If this is a false flag operation, I’m kinda okay with them taking out their fuel or artillery storage sites. Either one is fine! It’s better than killing civilians, which is the pretext they used during the second Chechnya war.

Meanwhile, the fires are already showing up on NASA’s FIRMS satellite imagery.

Woah, the video is INTENSE:

#BREAKING: Large explosions reported at a large Russian military base in Bryansk, Russia amidst reported strikes by Ukrainian forces.

Certainly dramatic enough for Putin to use as justification for full mobilization. Posting this for the video, not the stupid tweet prematurely claiming this was Ukrainian strikes, or somehow tying them to the high-level American delegation in Kyiv.

Here’s more video capturing both explosions in one frame. One is definitely a fuel depot. The other location is literally a fuel depot adjacent to an artillery military base. Either could be hit. But both fires are burning identically, which suggests both were fuel depots explosions.

No way this was accidental. Someone set these off.


The red fire square overlaps civilian areas. If the blast didn’t cause injuries or deaths, the smoke will create huge issues. I’m not keen to see any civilians die, regardless the country. And the area around the military base is densely inhabited.

8 Nutritious Meal Plans for a Healthier Life (with Shopping Lists!)

From Bank Holidays to Bridgerton Season 2, Here’s Everything to Look Forward to in 2022!

The ‘Putin Is Bad, But’ Republicans