PHOENIX — Tylor Megill’s training wheels have gradually loosened, to the point of disappearance.

With each start this season, the Mets right-hander has increased his workload, in terms of length and pitches, largely passing each test. Even the hesitancy to let Megill face a lineup for a third time has dissipated.

On Sunday, the Mets got a rebound performance from Megill, who worked into the seventh inning and carried the team to a 6-2 victory over the Diamondbacks at Chase Field.

The Mets won their fifth straight series to begin a season, matching a franchise record established in 2018.

Pete Alonso and Mark Canha celebrate during the Mets’ win over the Diamondbacks on Sunday.USA TODAY Sports

Megill pitched 6 ²/₃ innings and allowed two earned runs on five hits with seven strikeouts and one walk. He was removed after 92 pitches.

In his previous start, Megill allowed four early runs against the Giants, but still managed to work six innings and build his pitch count to 87. Megill owns a 2.35 ERA through four starts and has provided more than adequate coverage for the Mets as Jacob deGrom sits on the injured list.

Megill received a cushion in the seventh, when the Mets used two walks, two hit batters and a single to score twice and establish a 4-1 lead. After James McCann was plunked by Edwin Uceta to load the bases, Travis Jankowski walked. Starling Marte got drilled by Taylor Widener to force in the inning’s second run. J.D. Davis blasted a solo homer in the eighth for another run. The lead extended to 6-2 on Sergio Alcantara’s fielding error on a McCann grounder.

Marte’s speed put the Mets ahead in the sixth. After stroking a one-out double, Marte stole third and scored after catcher Jose Herrera’s throw eluded Alcantara, who was attempting a swipe tag. Marte’s stolen base was his fourth of the season. 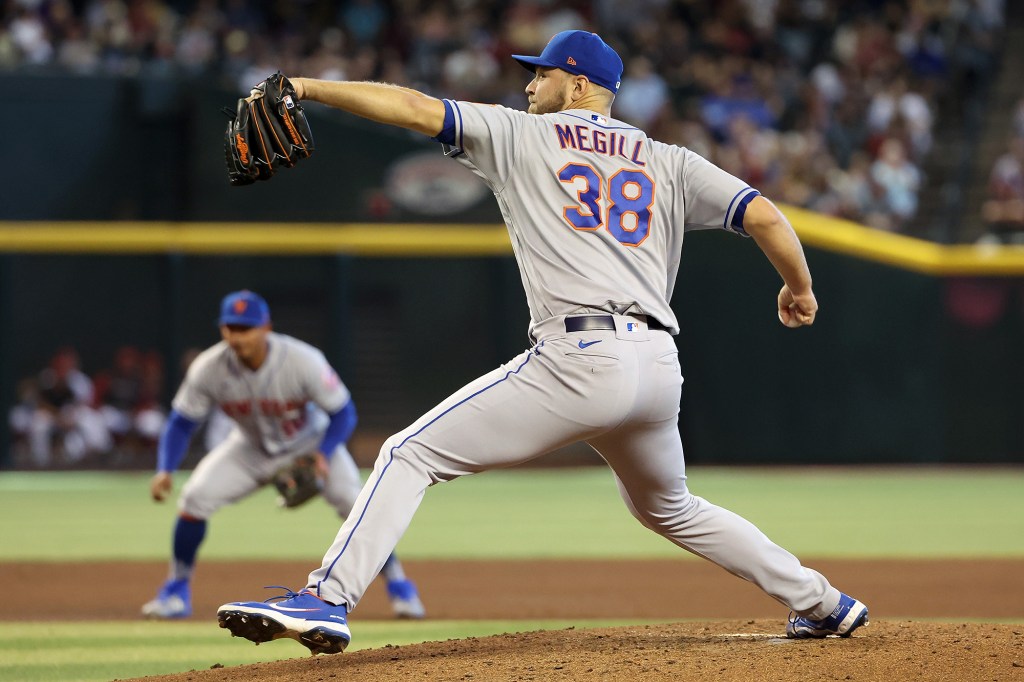 Tylor Megill earned his third win of the season as the Mets beat the Diamondbacks on Sunday.Getty Images

Francisco Lindor’s RBI single in the first gave the Mets a 1-0 lead. Mark Canha reached on an infield single leading off the game against Madison Bumgarner and reached second on Alcantara’s wild throw. Lindor delivered a one-out single that gave him 12 RBIs this season.

Christian Walker’s 467-foot bomb to left-center tied it 1-1 in the fourth. Megill fell behind 2-1 in the count and grooved a 97-mph fastball that Walker crushed for his fourth homer this season.