midst the home computer boom of the mid to late 80s, the Amiga stands out. Commodore’s overpowered successor to the immortal C64, it debuted in 1985 and fostered some unique creative and technological achivements that remain notable to this day, despite the platform’s unexpectedly swift downfall. Its library and software, while unforgettable to those who grew up with it, has been woefully underrepresented when it comes to retro gaming content. Now, Retro Games Ltd. has provided us with a brand new plug-and-play solution, the A500 Mini, that promises to bring easy and comfortable entry to the Amiga library to all ages and interests. Let’s take a look at what it offers and how it fares.

The A500 Mini takes its inspiration from the Amiga 500, a 1987 release and the most popular of the Amiga family. The original device operated on a Motorola 68000 clocked at ~7MHz with 512KB RAM, the latter spec giving the console its name. The A500 Mini is a bit more modern, with an All Winner H6 ARM chip and Amiberry emulation software running at a base resolution of 720p. Like other recent ‘mini’ releases, this is a complete emulation solution, in this case closely based on Raspberry Pi 3 hardware support with somewhat higher accuracy and compatibility due to its roots in WinUAE, the de facto emulation solution for Amiga as a whole.

For the dramatic story of the Amiga, watch Ahoy’s ‘Flatline’ documentary. It details the Amiga crashing out of the gate and stumbling to success before eventually imploding. But for its time, it was a beast of a machine that allowed for true 16-bit gaming and arcade perfection long before consoles reached that point with any consistency.

The A500 Mini takes direct inspiration the full-size console, with a non-functional tiny keyboard, a tiny power button, three USB ports, HDMI and USB-C for power. This is a beautiful little device that brings me some warm fuzzy feelings, and the plastic is fairly high grade, but the power button lacks feedback and feels cheap.

Packed in with the system are the mouse and the A500 gamepad necessary to play all the games provided on this unit. The mouse is a smaller replica of the original mouse and feels authentic, albeit a bit light, and now uses an optical sensor rather than a rubber ball. The controller takes inspiration from the Amiga CD32 controller that debuted in 1993, so this offers something of a new ‘standard’ for the Amiga with its release. Again, the build feels serviceable, and the button layout has been modernised from the ’93 original. The d-pad has been swapped from the disc-shaped original design too, going for a PlayStation-style alternative that’s more precise but feels too stiff.

The A500 Mini’s mouse, shown here next to the larger Amiga original, uses an optical sensor instead of a rubber ball. The A500 Mini has a nonfunctional keyboard, making this controller the primary input device. 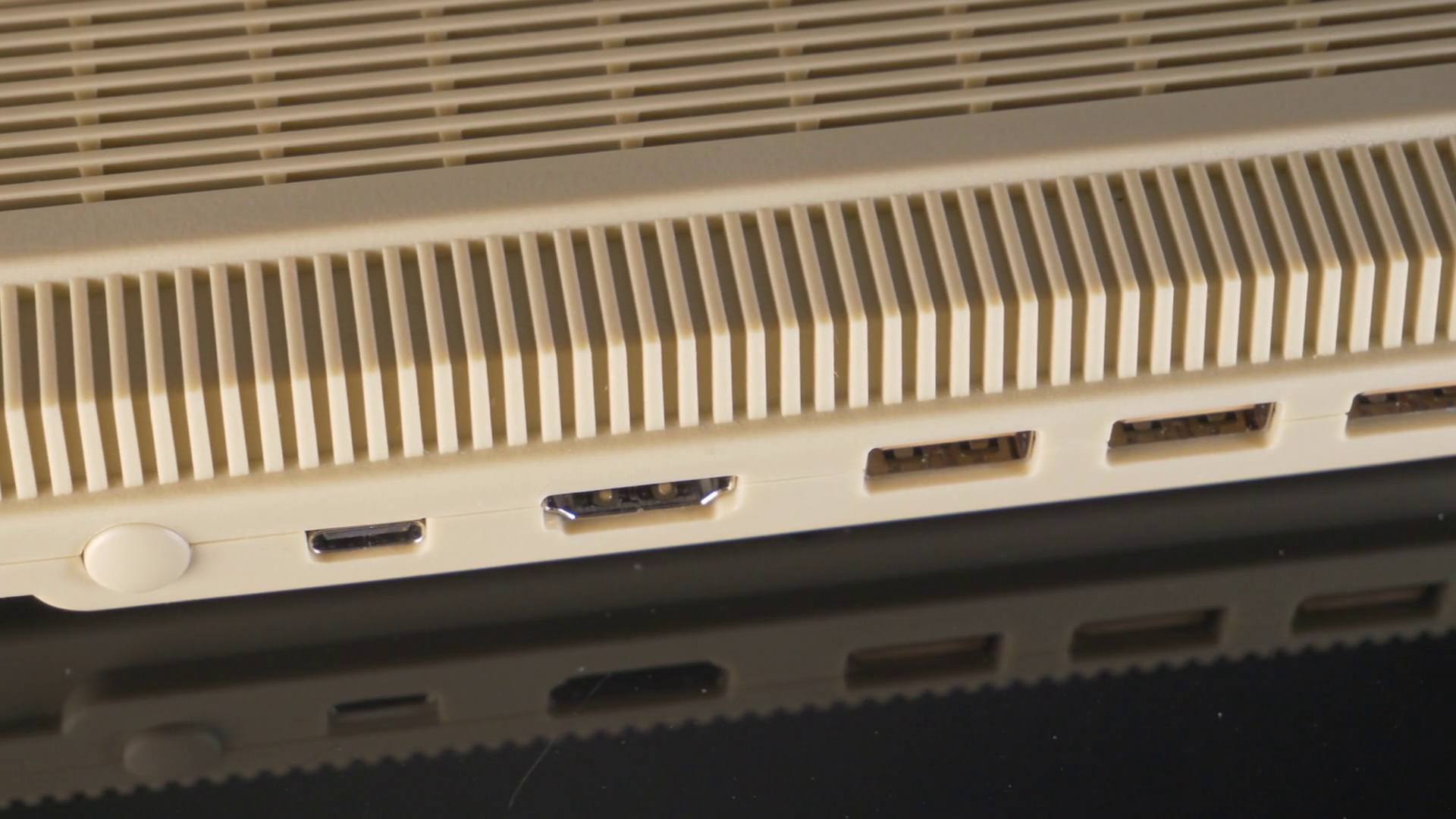 You get three USB-A ports for peripherals, USB-C for charging, an HDMI output and a button to turn the system on and off. 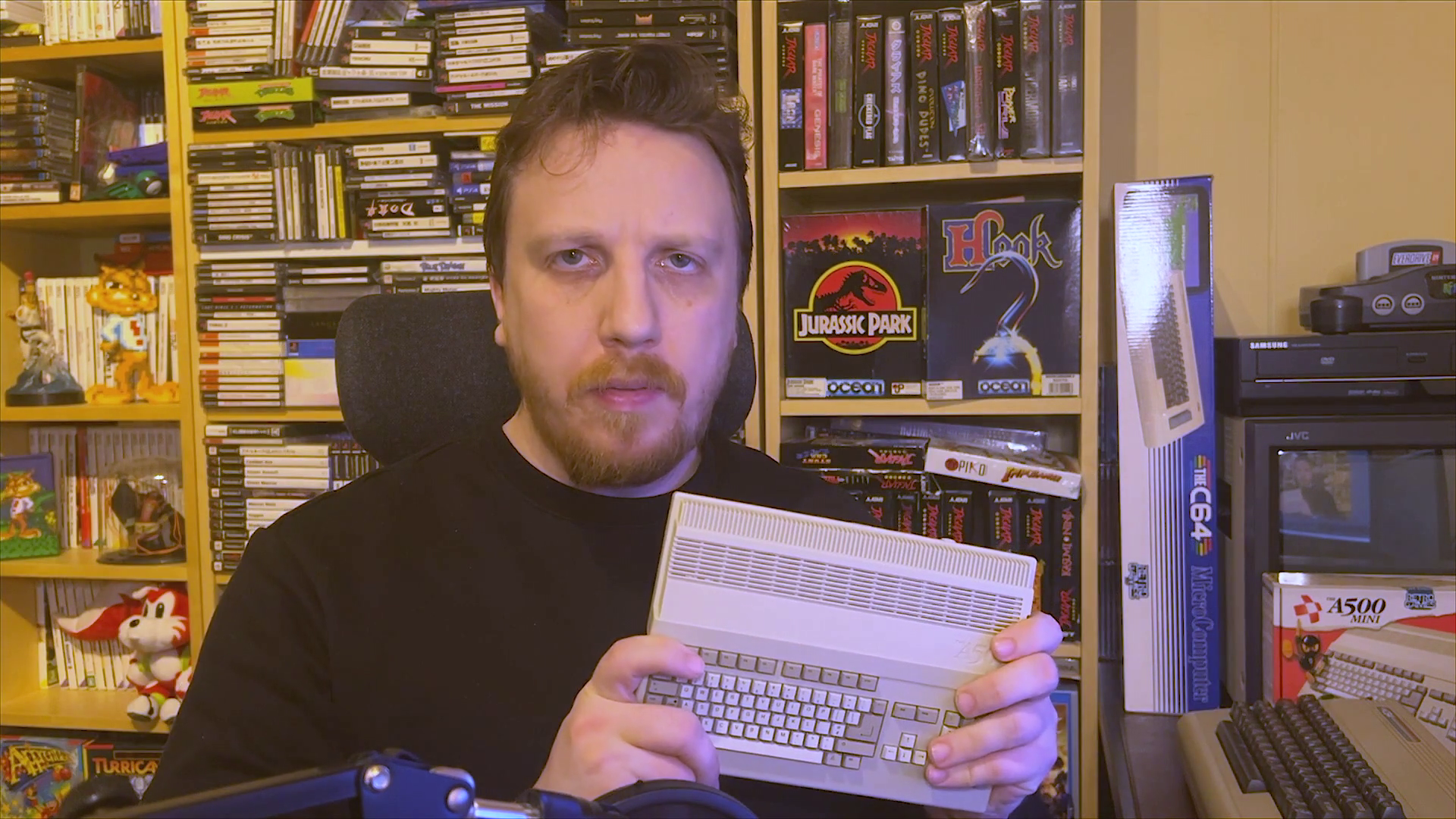 The A500 Mini is not exactly pocket-sized, but it’s small and light enough to toss in a backpack and use at a hotel or a friend’s house.

To find a better solution, I tested dozens of controllers – but often device mappings were incorrect. Only the 8BitDo SF30 controller was able to work perfectly to the device, and I ended up switching to it entirely. Hopefully this is something that can be improved with future firmware, and if mouse emulation could be added – say, to an analogue stick – we’d be really be in business.

Booting up the device, you’re greeted by a Netflix-like frontend showing the 25 games on offer. Not all are bona fide classics, but the complicated licensing situation means that some obvious inclusions might not have been viable. Each game is broken down in the video embedded above, but I’d like recommend Another World as being the standout choice here thanks to its unique atmosphere and reliance on a CPU-controlled character. In general, the games are emulated correctly, with only tiny differences in graphics, sound and run speed between the A500 Mini and the original unit. 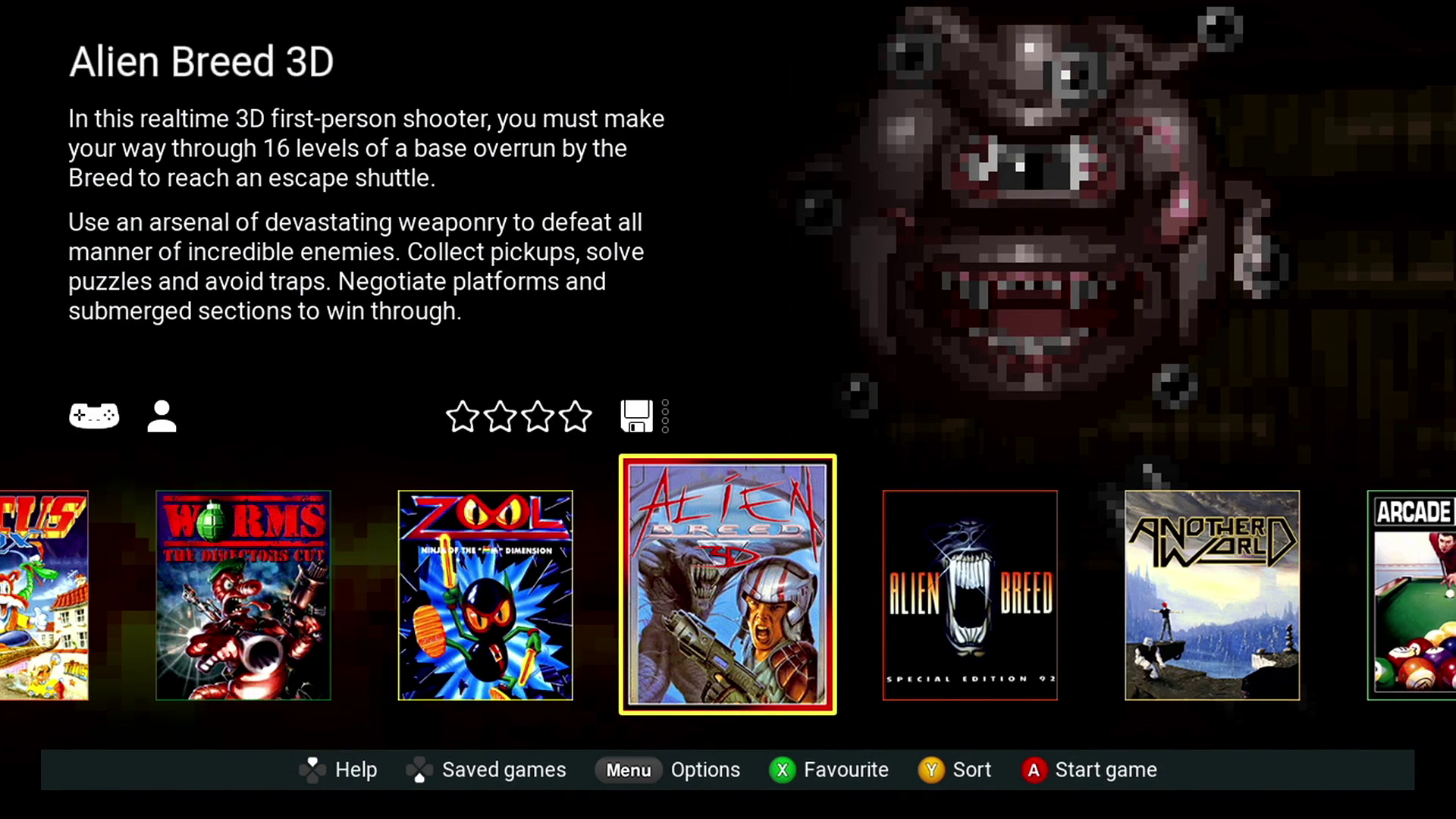 The Netflix-style main menu is easy to use, with the original box art front and centre. 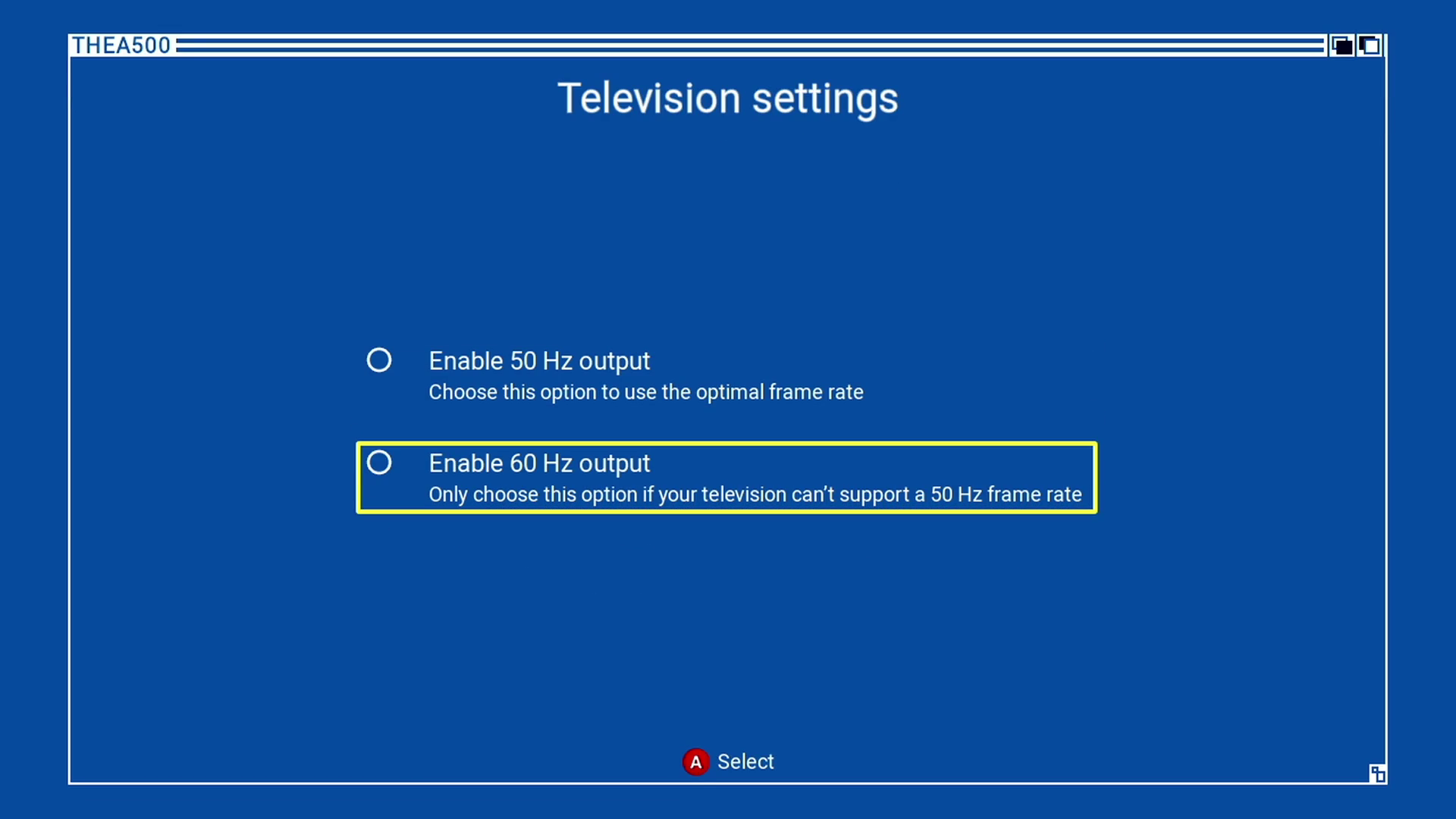 If your display supports 50Hz, and most do, then we’d recommend using it. 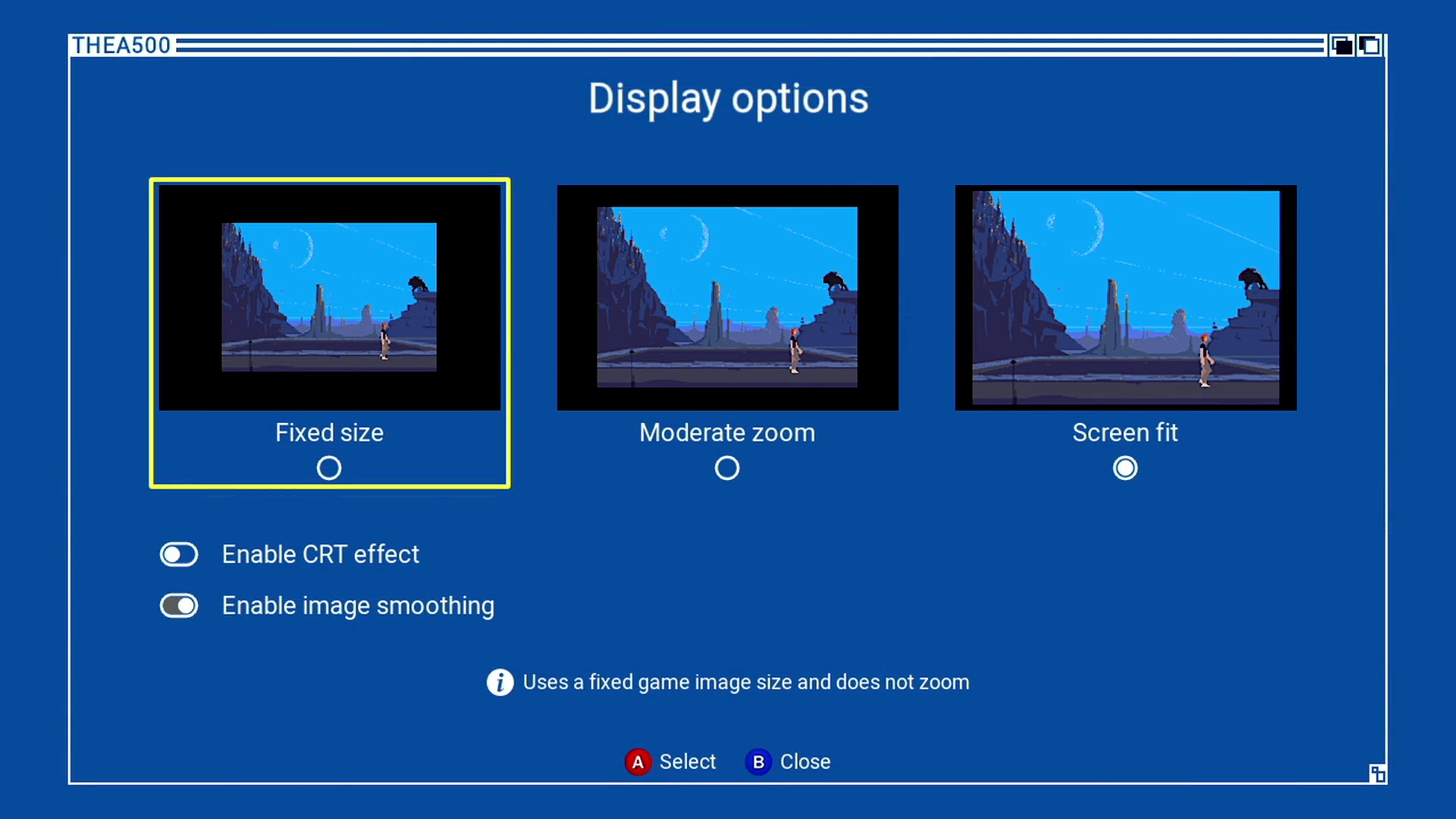 The screen fit mode makes a lot of sense here, but the two filters below work quite naively and ultimatley degrade the image. 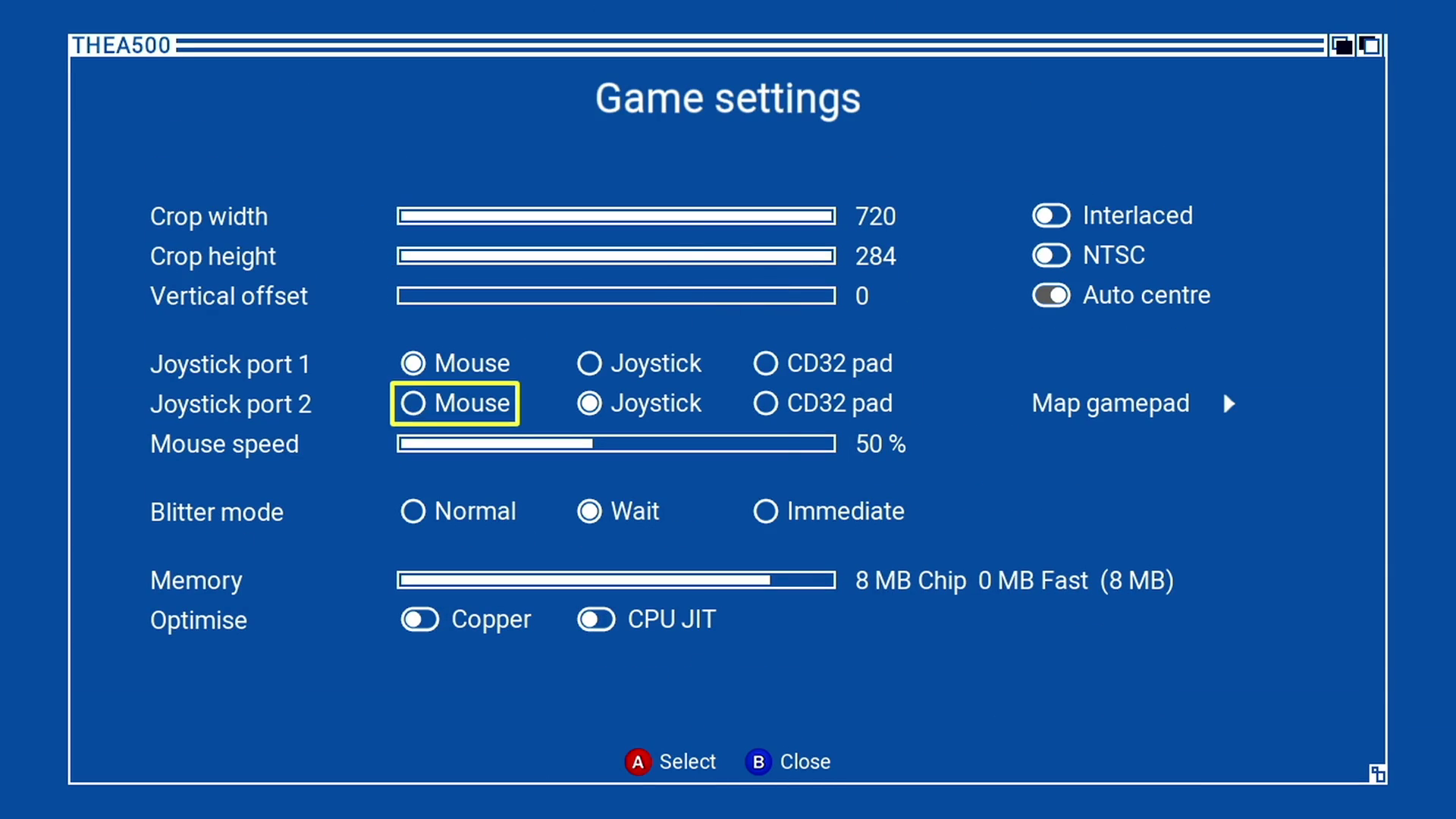 While most of these options are available in all games, some of the more complex options shown here are added when using the WHDLoad feature.

You also have access to an options menu. Note that when offered the choice of 50Hz and 60Hz output, don’t assume the latter is better. Most games were built for the European 50Hz standard, and therefore run more accurately here. You can also adjust the screen size to dynamically crop and zoom the image to better suit modern displays, which works well enough. There are also filters, including a CRT filter, but these are a bit crude and probably best avoided. Finally, lights on the unit can be set to respond to disk activity, which is useful to distinguish between a game that’s crashed and a game that’s merely loading the next level.

The final big selling point of the A500 Mini is WHDLoad support. This is essentially an archived image file of a game, optimised and configured to run its best on original hardware. It is sometimes cited as an emulation solution, but in fact WHDLoad is developed for original hardware and performs the same there as it will on any emulated device. What’s most important is that WHDLoad compiles floppies into a single drive image, basically removing any need for disk swapping and creating a single file solution to any game on the system. For the A500 Mini, it effectively means it consolises the game experience further thanks to the easy setup and running them is a mere drag and drop effort.

Retro Games themselves provides the WHDLoad profile on their website to download to a USB drive, and from there you can prepare and dump your own Amiga diskettes in what is an admittedly complex process. From there, essentially the entire world of Amiga is at your finger tips – you even get additional per-game options to dial in the emulation to your liking.


So in the end, we are left with the usual two-fold answer when taking a look at these mini devices. For rekindling childhood memories or exploring the Amiga library for the first time, the A500 Mini is a very welcoming device indeed – especially given its open nature when it comes to sideloading games. It gives a more modern console experience, allowing access to some incredible games that were previously hard to find as original copies and tough to dial in under emulation. But for those who have already dabbled with the original hardware or extensively configured their emulation boxes via Recalbox or MiSTer devices, there’s nothing new here and you are probably better served within your own infrastructure of custom setups.

Like the C64 Mini before it, it will be fascinating to see if the A500 Mini leads to a boom period for new commercial releases based on Amiga hardware. With that mini console, developers saw an opportunity to target a ‘new’ platform for their modern retro releases, and sales steadily increased as fans both new and old saw new software specifically optimised for the aftermarket device, something which could be taken even further on the A500 Mini with WHDLoad. The A500 Mini could usher in a new wave of Amiga fans and software, but it remains to be seen if Retro Games Ltd. make it possible.

5 Places To Visit In Florida For Couples

8 Best Tactics to Lead a Team with Zero Experience