Glowing spider fossils may exist thanks to tiny algae’s goo

The secret ingredient for fossil preservation at a famous French site wouldn’t be found in a Julia Child cookbook. It was a sticky goo made by microalgae, researchers suggest.

An analysis of roughly 22-million-year-old spider fossils from a fossil-rich rock formation in Aix-en-Provence, France, reveals that the arachnids’ bodies were coated with a tarry black substance. That substance, a kind of biopolymer, was probably secreted by tiny algae called diatoms that lived in the lake or lagoon waters at the ancient site, scientists report April 21 in Communications Earth & Environment.

The biopolymer didn’t just coat the spiders’ bodies — it pickled them. By chemically reacting with the spiders’ carbon-rich exoskeletons, the goo helped preserve the bodies from decomposition, allowing them to more easily become fossils, the team hypothesizes.

A clue that this coating might play a role in fossilization came when the researchers, on a whim, placed a spider fossil under a fluorescence microscope. To their surprise, the substance glowed a bright yellow-orange. “It was amazing!” says geologist Alison Olcott of the University of Kansas in Lawrence.

That discovery — along with an abrupt halt in early 2020 to any additional fossil-collecting plans due to the COVID-19 pandemic — swiftly shifted the focus of the team’s work. “Had it been normal times, this would have been a side note in a taxonomy study” classifying ancient spiders, Olcott says. Instead, “I really had to explore what I had,” she adds. “It was me and these images.”

The researchers next sought to identify the chemical makeup of the mysterious substance. The orange-yellow glow, the team found, comes from abundant carbon and sulfur in the coating. “That got me thinking about sulfurization,” Olcott says. 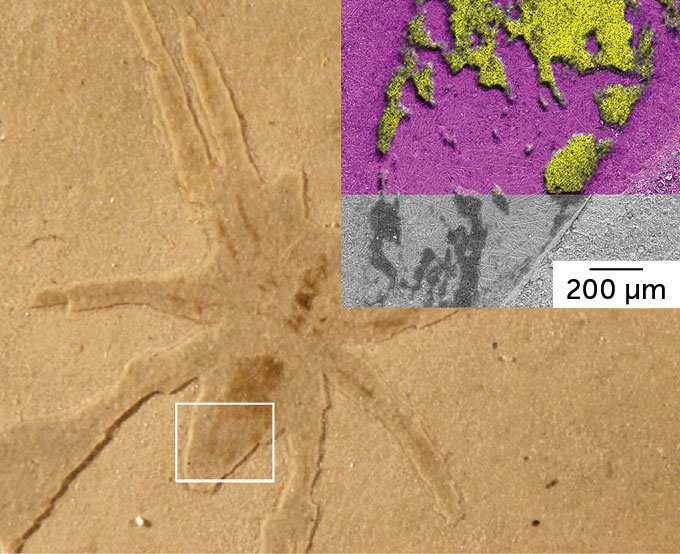 Sulfurization is the reaction of organic carbon with sulfur, which forms sturdy chemical bonds with the carbon, making it more resistant to degradation and breakdown — similar to how tire manufacturers harden rubber to make it more durable. The process requires a ready supply of sulfur available for bonding.

In modern times, such a supply comes from the sulfur-rich gooey secretions of diatoms, microalgae found floating in many waters around the world. When these secretions meet carbon-laden marine particles headed for the bottom of the ocean, this sulfurization process helps lock the carbon in place and possibly keep it buried in the seafloor.

Similarly, sulfurization might help to preserve delicate carbon-rich fossils, helping them to withstand the test of millions of years of geologic time, Olcott says. Scientists have often noted diatoms in the fossil-bearing rock formations of Aix-en-Provence, as well as at many similar fossil-rich sites, she adds. “Everyone’s seeing diatoms everywhere. Thinking about that and the chemistry, I was like, ‘Wait a minute. All the pieces are here to make this chemistry happen.’”

The arachnids’ preservation might have gone like this: A dead spider, floating in the water column, became covered in the diatoms’ sticky goo. The goo chemically reacted with the spider’s chitin exoskeleton, more or less pickling it and keeping the exoskeleton largely intact and ready for fossilization.

That scenario “makes sense based on what we know about organic sulfur cycling in modern environments so far,” says Morgan Raven, an organic geochemist at the University of California, Santa Barbara. Scientists still have a lot to learn about the conditions that allow materials like chitin to sulfurize, Raven says. “But this study highlights why that matters.”

For example, if sulfurization selectively helps preserve some types of organic matter — such as soft-bodied fossils — that “could be a crucial filter on our fossil record, influencing what we do and don’t know about plant and animal evolution,” she adds.

This process of diatom-assisted sulfurization may have been at work in other fossil-rich sites during the Cenozoic Era, Olcott says. That span of time began 66 million years ago, after an asteroid ended the Age of Dinosaurs, and continues to the present day. Before that era, diatoms were not widespread. That didn’t happen until silica-bearing grasses sprouted around the world during the Cenozoic, offering a ready source of silica for the tiny creatures to build their delicate bodies (SN: 5/1/19).

It’s unknown if other biopolymer-producing algae might have helped fossilize soft-bodied creatures from even earlier, such as during the flourishing of Cambrian Period life-forms beginning around 541 million years ago, Olcott says (SN: 4/24/19). “But it would be really interesting to expand this further out.”