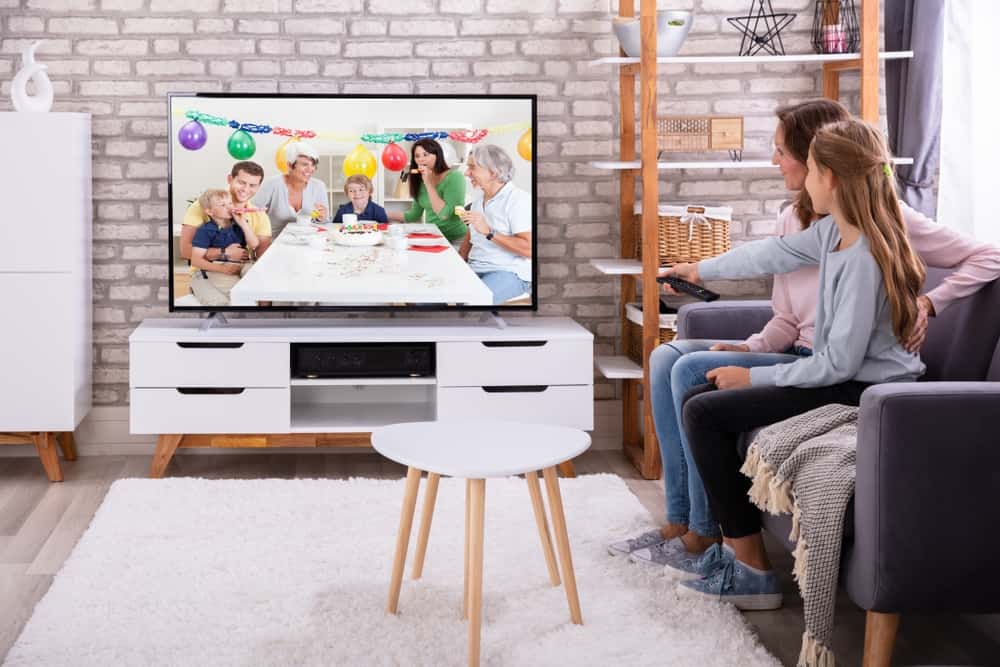 With an impressive operating system and low input lag, the LG SK9000 offers excellent performance for movie lovers and gamers. Also, this television offers outstanding picture quality and sound performance. However, the television has a poor contrast ratio.

Are you a fan of the LG brand and looking for a 4K television with decent picture quality? If so, this LG SK9000 review should be an interesting read.

In this review article, I will discuss in detail the various specifications and features that make up the LG SK9000. Hence, I will be examing the display features, sound features, smart features, design, and ports and connectivity features of the television.

Besides, I’ll also be rating the television on a scale of one to ten in each section based on its performance and my personal opinion. Also, in various sections of this review article, you will get to know the merits and demerits of the LG SK9000.

Therefore, for you to have enough information to make an informed purchase decision, I urge you to read this article to the end. 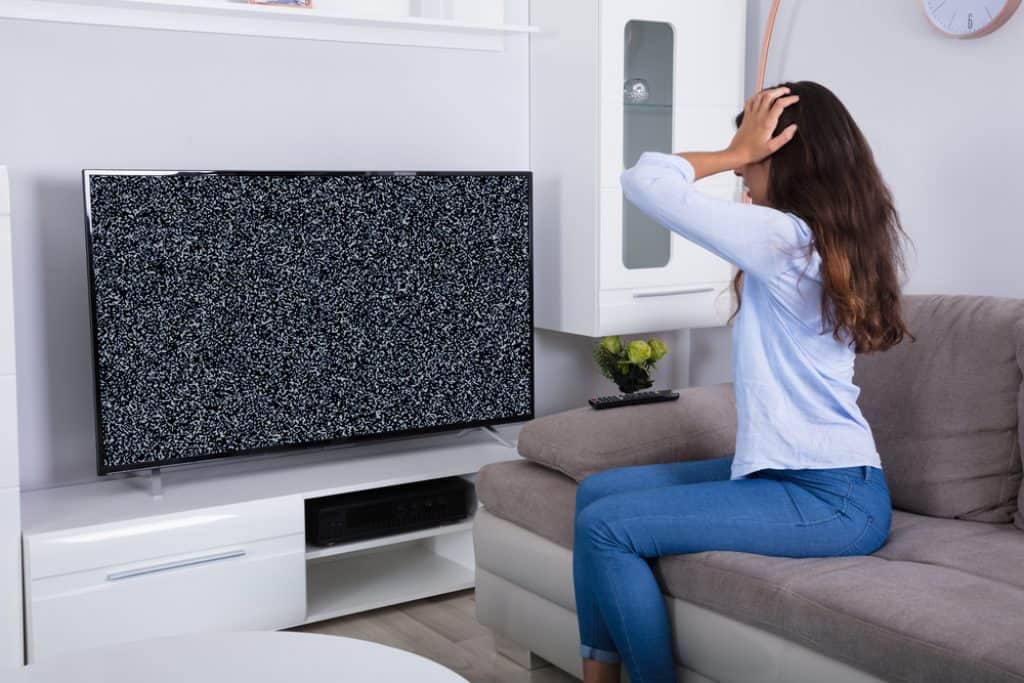 In recent years, LG a.k.a Life’s Good has gone on to be one of the top manufacturers of 4K televisions. On that note, the brand released the LG SK9000 in 2018 so as to add to its impressive collection of 4K televisions.

This 4K television is a smart television that has a decent picture quality and overall performance. Also, as an LG smart television, the LG SK9000 comes with the webOS that gives it access to lots of major streaming services and apps.

However, there are some major areas where this television is flawed. I know you must be curious about the areas that I am talking about.

Why not read on to satisfy your curiosity? 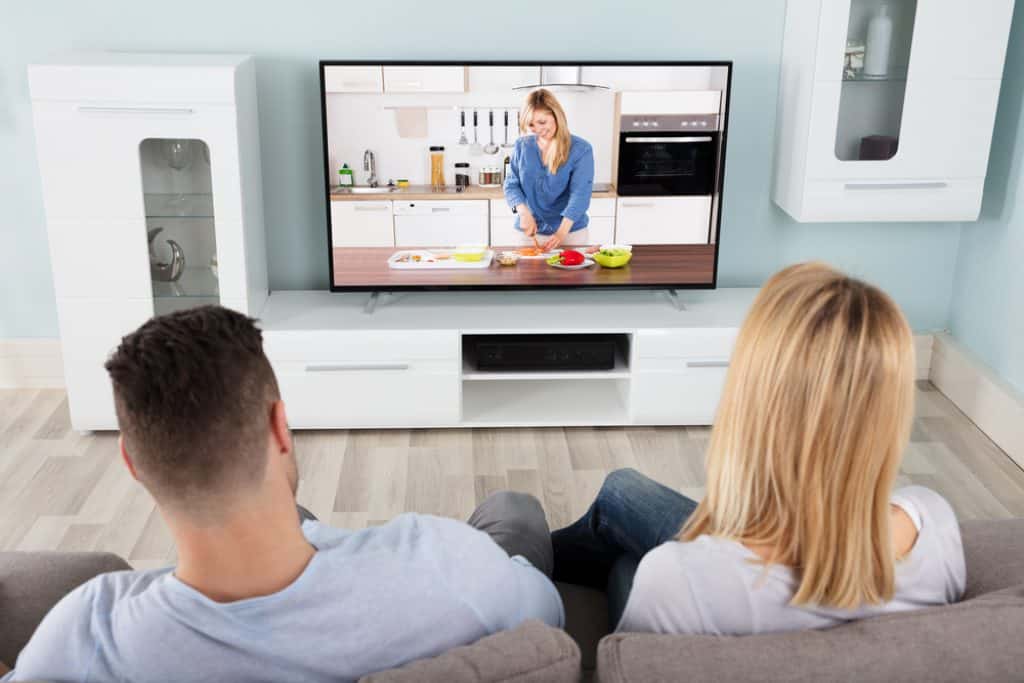 The LG SK9000 comes with a modern design and features extremely slim bezels that surround its display screen. These bezels are made out of plastic and have a bold-looking matte-black finish.

However, unlike most televisions, there is no brand logo on the bottom bezel or anywhere around the bezels. This is due to the extreme slimness of the bezels.

Moving on, the LG SK9000 comes with a curved metallic stand that has a wide footprint and a silver finish. Due to the metal build of this stand, it is very sturdy and supports the television very well.

As a matter of fact, the television will only wobble a bit when forcefully nudged or pushed. Besides, on the back of the television’s stand, there is a hole that serves as a cable management system.

Turning to the back of the LG SK9000, you will come across a metallic panel with a matte-black finish and smooth texture. Moreover, this back panel features four VESA 300 x 300 holes for mounting the television on the wall.

Also, the television’s back panel isn’t too thick or too slim – it has an average thickness. Therefore, whenever the LG SK9000 is mounted on the wall, it shouldn’t stick out too much to the extent of looking awkward.

In conclusion, the LG SK9000 comes with a modern design, featuring extremely slim bezels and a sleek curved stand. Also, this television offers a form of cable management system on the back of its stand.

Therefore, I will be rating the LG SK9000 an eight out of ten in this design review section. 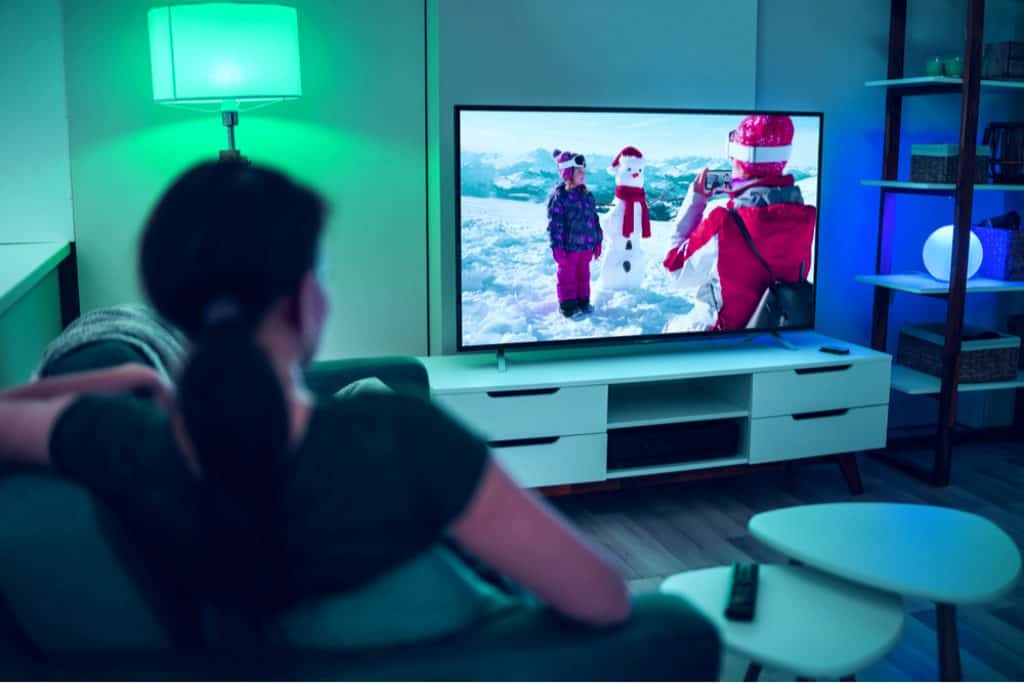 When it comes to the display, the LG SK9000 features a 55-inch LED display and a 4K UHD (3840 x 2160) resolution. As most of us know, 4K UHD resolution is the most-used resolution in the television world today.

You will hardly find a television manufactured between 2019 to date that doesn’t use 4K UHD resolution. This is due to the fact that the resolution allows a display to deliver sharp, bright, and colorful images.

Due to this IPS panel, the display offers wide viewing angles. As a result, colors and images will remain constant without losing quality even when watching the television from an extreme angle or off-center.

Thus, the LG SK9000 is ideal for a large or wide room setting. Sadly, as with most IPS panel displays, this television’s display offers a poor contrast ratio.

Precisely, the display features a low contrast ratio of 1,306:1. In brief, contrast ratio is the ratio between the whitest white and darkest blacks that a display can render.

However, with a contrast ratio as low as 1,306:1, the LG SK9000’s display will not be able to render deep blacks. Practically, blacks rendered by the display will look more like gray.

Therefore, movies or TV shows with lots of dark or shadowy scenes like horror movies will not be enjoyable on the LG SK9000. Also, the television may not be ideal for usage in dark rooms.

On a positive note, to make up for its display’s poor contrast ratio, the LG SK9000 supports local dimming. Briefly, local dimming is a picture technique that dims the backlight zones of LED/LCD displays so as to increase their contrast ratio and black level.

Hence, thanks to this technique, blacks on the LG SK9000’s display should appear darker than they would without the technique. Thereby, improving the overall picture quality as well as the dark room performance of the television.

Apart from supporting local dimming, the LG SK9000 also supports HDR (High Dynamic Range) in 4K Active HDR format. For clarity, HDR is a picture technology that amplifies the color accuracy and brightness of a display when rendering HDR-supported content.

Thus, when watching such content on the LG SK9000, the picture quality and colors will be brighter, natural, and more realistic. In case you aren’t aware, HDR-supported content can be mostly found on streaming services like Hulu.

Besides, thanks to HDR, this television’s display has an impressive maximum brightness of 520 nits. As a result, the television should be good for usage outdoors or in well-lit areas.

Having established all that, let us now discuss the motion handling performance of the LG SK9000’s display. Starting with the response time, this television’s display comes with a fast response time of 14.4 milliseconds.

Due to this, the LG SK9000 should be ideal for watching fast-motion content as there will be minimal or no blur trails. By the way, response time is the total amount of time a display takes to change from one color to another.

Asides from its fast response time, the LG SK9000’s display also features a low input lag of 14.2 milliseconds. As a result, this LG television should be good for playing video games.

If you are unaware, input lag is the duration it takes a display to register signal input from external sources like a wireless gamepad. Moreover, the lower the input lag of the display, the better the gaming experience.

In conclusion, the LG SK9000’s display offers adequate performance for movie lovers and gamers. Specifically, the display supports HDR, features a 4K UHD resolution, and has a low input lag.

Apart from its poor contrast ratio, there is nothing to hate about this television’s display. As a result, I will be rating the LG SK9000 a nine out of ten in the display features review section. 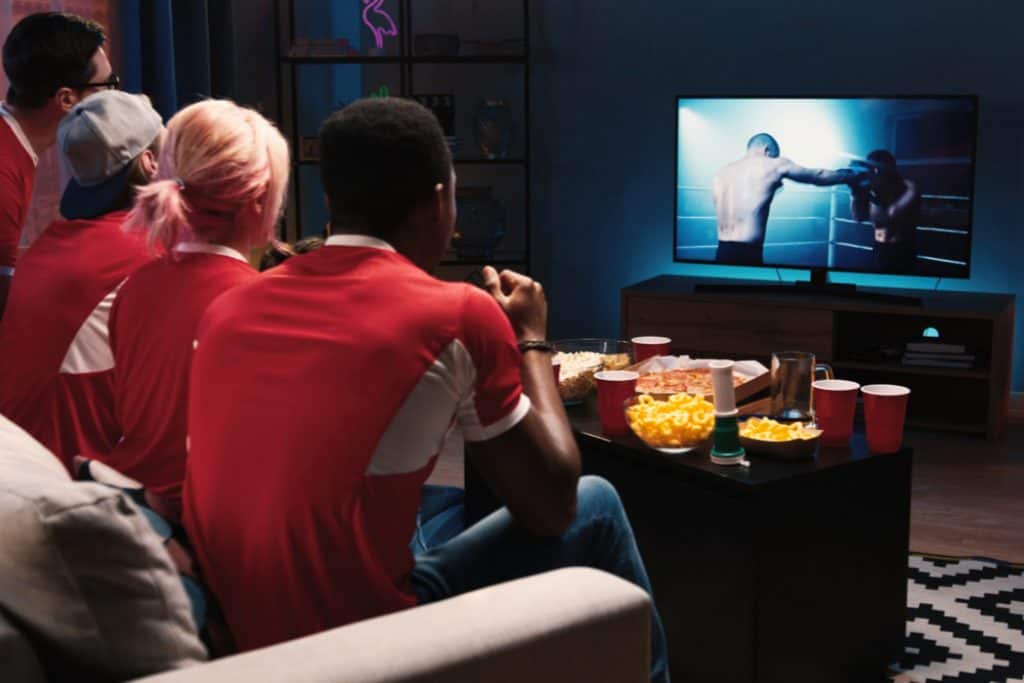 The LG SK9000 offers a good sound performance, featuring a pair of 20-watt speakers that delivers an impressive audio quality. Furthermore, these speakers are considerably loud and are capable of filling a large room with sound.

Aside from being loud and producing great audio quality, the LG SK9000’s speakers are also capable of generating clear dialogue. For context, dialogue is the conversation between two or more people in a TV show or movie.

To make things even better, the LG SK9000 comes with a built-in subwoofer for adequate bass production. As a result, bass-heavy movies should be enjoyable on the television.

That’s not all, the television will be ideal for watching movies with lots of rumbling and thumping sounds. In addition to its adequate bass production, the LG SK9000 features sound technologies such as DTS-HD and Dolby Atmos.

These sound technologies not only improve the loudness and quality of the TV’s speakers but also enhances their surround sound production. Thus, the speakers will be able to deliver a theater-like, cinematic, and immersive sound quality.

The LG SK9000 continues to impress in the sound department as its offers an excellent distortion performance. Basically, this television delivered an impressive score of 0.453% on a THD (Total Harmonic Distortion) test.

However, if the score is exactly 1% or less, the sound system can only produce a minimal amount of distortion. Evidently, the THD score of the LG SK9000 is way less than 1%.

Hence, even when the television is set to the maximum volume level, its speakers will produce minimal or no distortion. For the record, distortion in this context is the deformation of a sound system’s original audio frequencies.

To wrap up this sound features review section, I will be rating the LG SK9000 a nine out of ten. 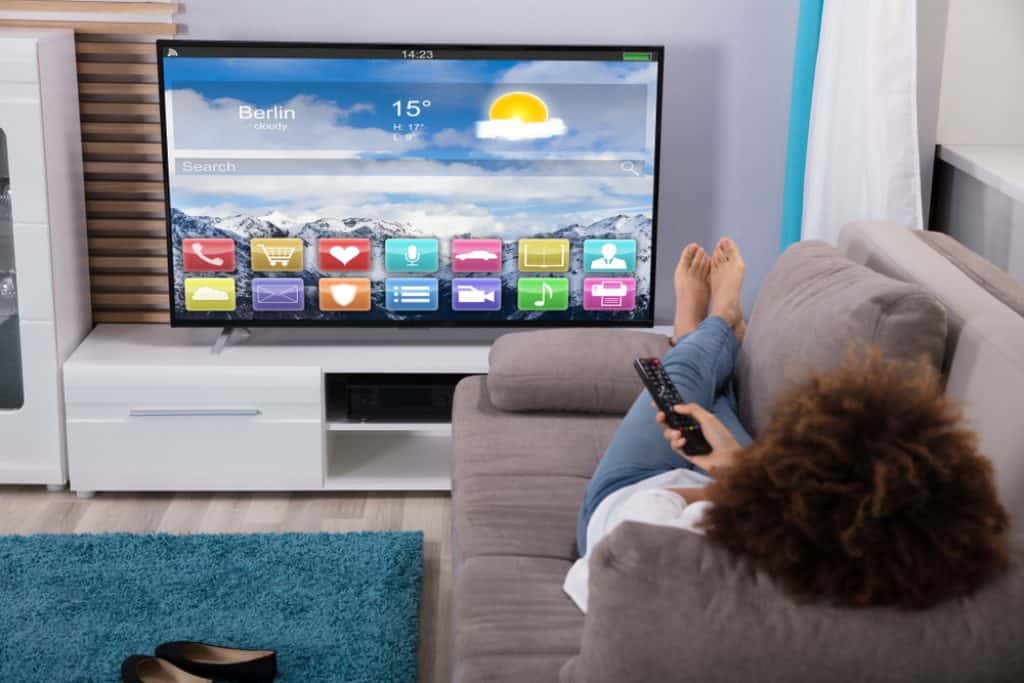 Like most LG televisions, the LG SK9000 comes with a decent amount of ports. To give more details, all the ports are housed on the back panel of the television.

Specifically, they are separated into two groups – one group facing the left side and the other directly on the television’s back. Starting with the left-facing ports, you will find four HDMI ports and two USB 2.0 ports.

As with most televisions nowadays, one of these HDMI ports supports ARC (Audio Return Channel). As a result, connecting a soundbar to the LG SK9000 shouldn’t be a problem.

When it comes to the included remote control, the LG SK9000 features an LG magic remote control. This remote is medium in size, has curved edges, and features a plastic body with a glossy-black finish.

Besides, the remote features two dedicated buttons that give users quick access to streaming services like Netflix and Prime Video. Also, this remote has a built-in microphone for voice input via Google Assistant or Amazon Alexa.

All things considered, there is nothing stopping me from rating the LG SK9000 an eight out of ten in this ports and connectivity review section. 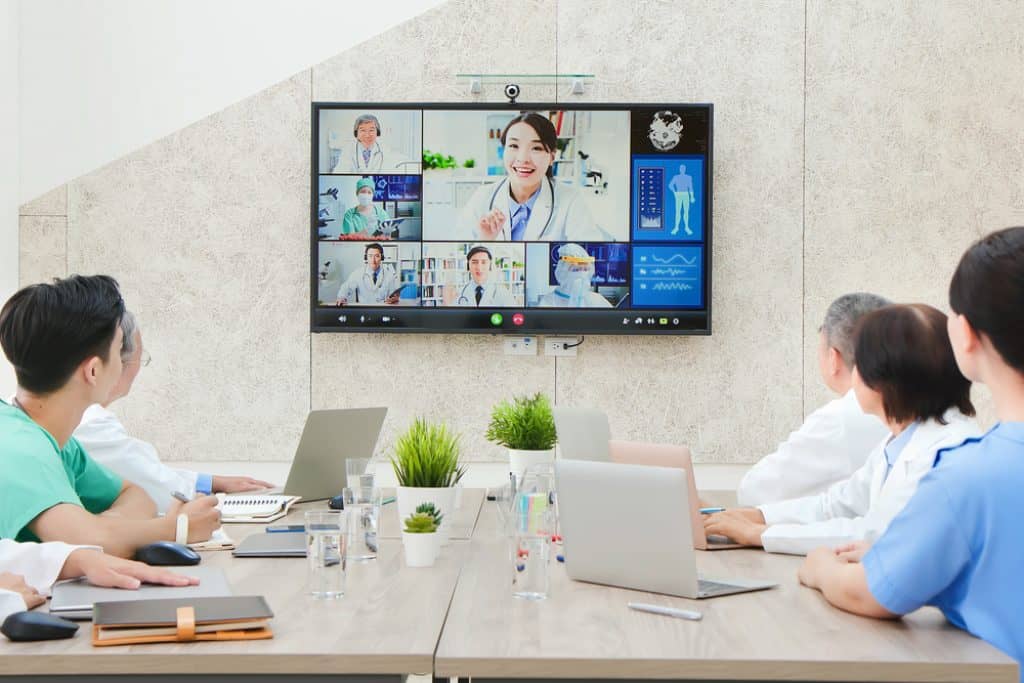 As expected, the LG SK9000 comes with webOS. This operating system is very easy to navigate as it features a user-friendly interface that is lag-free, ads-free, and has smooth animation.

Nevertheless, with the LG Smartshare app, users should be able to share/stream multimedia content from their smart devices to the LG SK9000. Moreover, this application is free and available for download on the Google Play Store and App Store.

As a matter of fact, the application supports various operating systems including Windows, Linux, Android, and macOS.

After thorough consideration, I will rate the LG SK9000 a nine out of ten in this smart features review section. 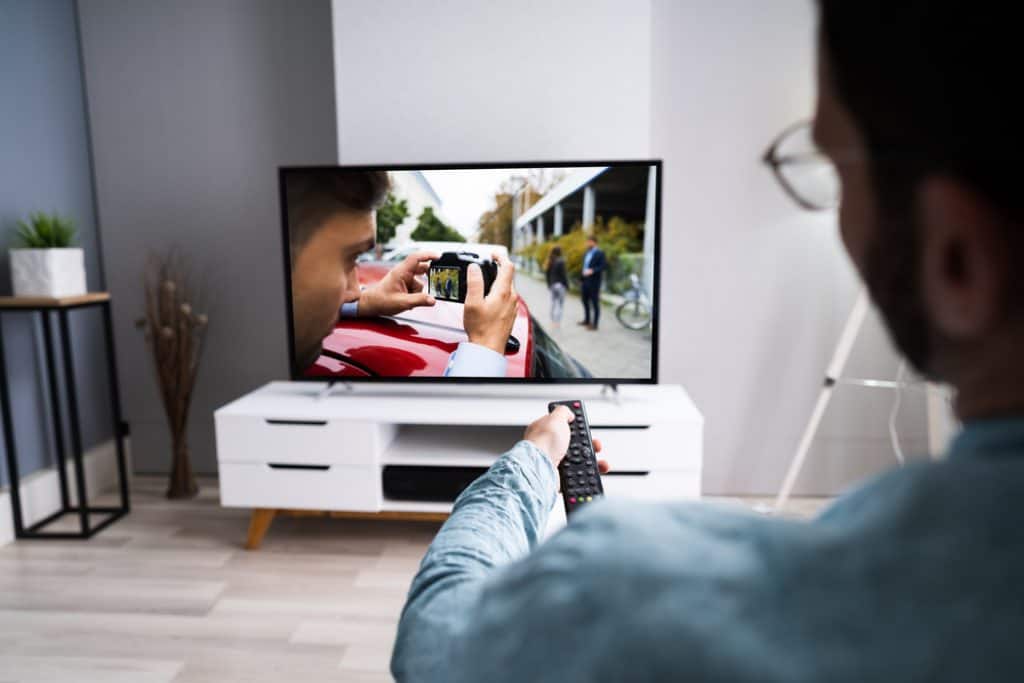 The LG SK9000 features four HDMI ports. It is worth noting that one of these HDMI ports supports ARC (Audio Return Channel)

The LG SK9000 comes with an LG magic remote control that features a built-in microphone for voice input.

Yes, it does. The LG SK9000 features Bluetooth 4.2 for wireless connectivity. 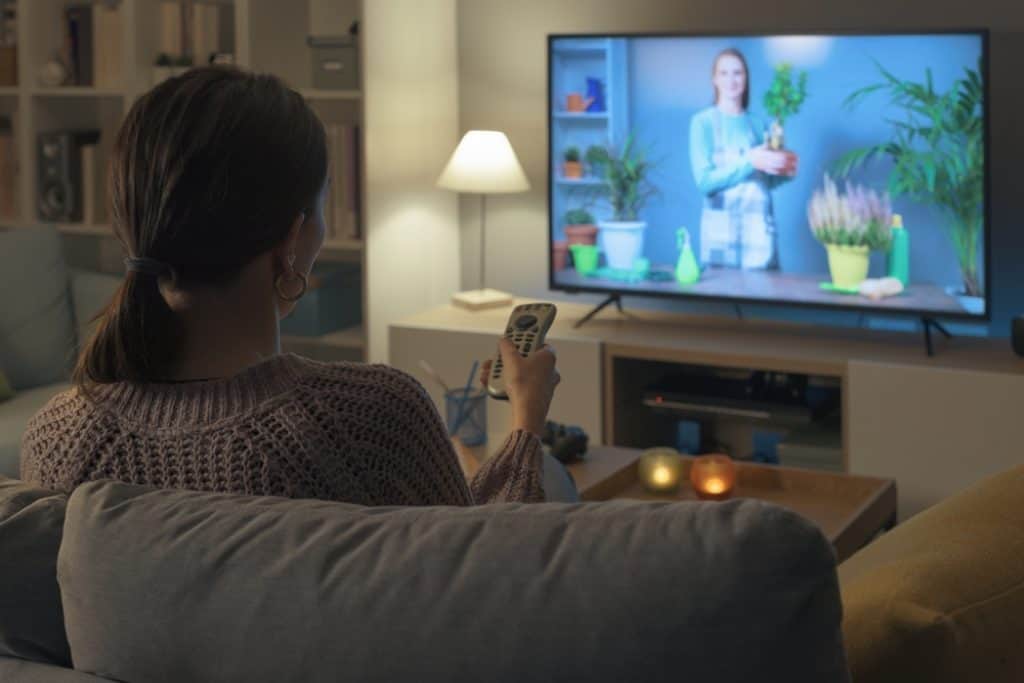 The LG SK9000 is a smart television that comes with a functional operating system and an impressive 4K UHD display. Furthermore, the television features an LG magic remote control that has a built-in microphone for voice input.

That’s not all, this LG smart television also has a decent number of ports and an outstanding sound performance. Moreover, the television is good for a large room setting as its display offers wide viewing angles.

Honestly, apart from its poor contrast ratio, there is nothing serious to hate about the television. Hence, if you are in need of a 55-inch smart television, you should check out the LG SK9000.

Will Biden Take Trump’s Path to Get More COVID Funding?