Selling Sunset season 5 is finally here, and there’s a new agent in town. Meet Chelsea Lazkani, a real estate mogul who’s about to stir things up at The Oppenheim Group.

From her close bond with resident villain Christine Quinn to her natural ability to sell high-end real estate, Lazkani is breathing new life into Netflix’s hit reality show. Here’s what you need to know about Selling Sunset’s newest agent.

Viewers will quickly discover that Chelsea Lazkani is happily married to Jeff Lazkani, with whom she shares two children—son Maddox and daughter Melia. Jeff is a Managing Partner at Icon Media Direct, per his LinkedIn. As Chelsea reveals during the new season of Selling Sunset, it was her husband who first connected her with Jason Oppenheim.

In 2017, she opened up about her romance with Jeff in an Instagram post, writing, “Almost 2 years ago I came to Los Angeles for what was meant to be a ‘short break’. I stayed because I fell in love.” She continued, “It was the best decision I’ve ever made.” That year was when Jeff and Chelsea tied the knot.

Although Chelsea Lazkani didn’t know any of Selling Sunset’s formidable agents prior to joining the show, she’s quickly forged some strong friendships. In March 2022, she told People, “I just adore Christine [Quinn]. We have such a great relationship.” However, Chelsea isn’t taking up any of Quinn’s fights just yet, as she told People, “I understand they may have had drama, but I am here to form my own unique relationships.”

Discussing her connections with the other Oppenheim Group agents, Chelsea told People, “Emma [Hernan] and I have a very special connection. I think the world of Chrishell [Stause].” She continued, “To be honest with you, I just have a budding relationship with all the girls. I’m still getting to know some of them, but I didn’t know them before the show.”

It goes without saying that Selling Sunset is as much about the fashion as it is the high-end real estate and drama. So it makes sense that Lazkani loves gorgeous clothing. In fact, she wore a jaw-dropping Zuhair Murad gown at her 2017 wedding. 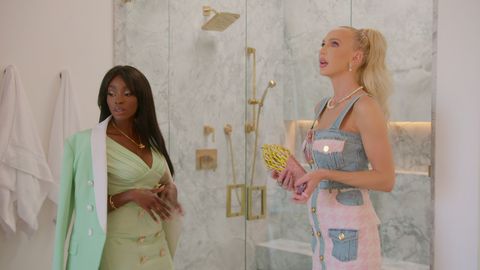 Despite having access to the best designers, Chelsea has a few tricks up her sleeve. For instance, in February 2021 she took to Instagram to reveal, “Having kids taught me how to get ready in under 30 minutes… oh yeah and to make use of filters.”

Fans of the show will most definitely be drooling over every single one of Chelsea’s outfits, especially as she even gives Christine Quinn a run for her money. We’re living vicariously through her as she stuns in all of her Selling Sunset looks.

She’s ready to build her own empire.

Obviously, Selling Sunset has already helped to build some super successful careers, and the agents at The Oppenheim Group regularly sell seriously expensive properties. Needless to say, Chelsea is more than ready to start building her own multi-million dollar business.

“It kind of helps me see my future trajectory by being around so many successful women,” she told People. “It helps materialize the fact that I can be selling $20 million, $30 million, $40 million homes, seeing other women in close proximity to me doing it.”

She’s been inspired by both of her parents.

Chelsea Lazkani’s parents inspired her real estate and business career. As noted in her official bio on The Oppenheim Group website, “Her mother, Elizabeth Adefioye, boundary-breaking career as Chief People Officer at Emerson, provided Lazkani with both the inspiration for what could be possible for her own life but also afforded her the opportunity to travel and see the world, solidifying her love for design, culture, and people.”

Per her bio, Chelsea’s father, Segun Adefioye, inspired her love of real estate as he works as an Architect and Property Developer.

She’s excited for Selling Sunset fans to follow her journey.

Speaking to People, Lazkani called the new season “so juicy.” She continued, “I will say it’s really electric … It’s nothing you’ve ever seen before on TV.”

Ahead of the launch of season 5, Lazkani took to Instagram to write, “Visualizing the journey, embracing it fully. Thank you for the love everyone. I’m bursting!” We can’t wait to see what she does next.

Best Antique Stores in Michigan in 2021

101 Best Prize Ideas to Give Away in Online Contests & Competitions