US Congresswoman fights off accusations of ‘insurrection’ — RT World News

US Congresswoman Marjorie Taylor Greene, a Republican from Georgia, testified on Friday at a hearing aimed at barring her from Congress over her alleged role in fomenting the Capitol Hill riot last January, dubbed an “insurrection” by Democrats and liberal pundits. Greene insists she broke no laws, and her supporters have decried the hearing as an attempt by Democrats to punish a political opponent.

The case against Greene was brought by a group of Democrat voters in Georgia and supported by Our Revolution and Free Speech for People, two left-wing nonprofits. They argue that Greene can and should be barred from Congress under an obscure clause added to a Constitutional amendment after the Civil War.

This clause in the Constitution’s 14th Amendment prohibits anyone who “engaged in insurrection or rebellion” against the constitution or gave “aid or comfort to the enemies thereof” from holding office.

The clause has never been tested in court in this manner, and those pushing for Greene’s expulsion have an uphill battle ahead of them. For one thing, while the events of January 6, 2021 – which saw a crowd of Former President Donald Trump’s supporters force their way into the US Capitol in Washington, DC – have been described by democrats as an “insurrection” and an act of “domestic terrorism,” none of more than 800 people charged in connection with the day’s events have actually been accused of the crime of “insurrection.” 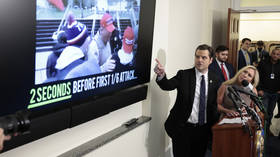 Greene’s lawyer told CNN that he considers the proceedings a “show trial,” and Greene herself insists that she never encouraged lawbreaking on January 6. Instead she maintains that she asked Trump’ supporters to show up in Washington that day for a “peaceful demonstration,” and in court on Friday she said she had “no knowledge” of any organized attempts to disrupt Congress’ certification of president Joe Biden’s electoral victory that day.

In her social media posts at the time and in her statements in court, Greene insisted that Biden’s win was fraudulent. Trump has repeatedly claimed the same, citing irregularities in mail-in voting and midnight “ballot dumps” in key swing states, but multiple court challenges by his campaign have failed to overturn Biden’s win.

Greene was accompanied to court on Friday by Florida Rep. Matt Gaetz, a close ally who has also questioned the legitimacy of Biden’s 2020 win. Gaetz said on Friday morning that he was present to support Green “against the assault on democracy that is this effort to remove her from the ballot.”

Both Greene and Gaetz were among the 147 Republicans in Congress who objected to the 2020 election results in battleground states.

Should Greene’s opponents be successful, the decision could have far-reaching

consequences. For example, Trump could face a similar challenge should he formally announce another run for the White House in 2024, given that he was already impeached for allegedly inciting the January 6 “insurrection.”

However, this is an unlikely outcome. A federal judge in North Carolina last month blocked a similar attempt to bar Rep. Madison Cawthorn – another conservative ally of Greene and Gaetz – from office using the same 14th Amendment approach. In Cawthorn’s case, the judge ruled that the Amnesty Act of 1872, which forgave Confederate soldiers who fought the Union a decade earlier, nullified the insurrection clause of the 14th Amendment.

Greene is seeking a second term in office this November, in a district that Republicans have held since it was created in 2010.

The Diamond World Is Scrambling to Keep Buying Russian Gems

Time is of the Essence in Operation: Tango’s Free Content Update