A Covid patient battled the same infection for nearly 18 months, in what is believed to be the world’s longest known continuous case.

Medics did not reveal what condition the patient had, how old they were, or whether they were vaccinated.

But they studied nine different patients with weakened immune systems because of organ transplants, HIV and cancer. 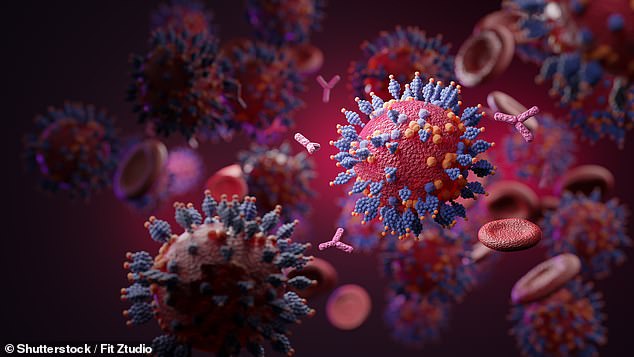 No10’s £400MILLION Covid hotels farce: Just one in FIFTY people who were quarantined during pandemic tested positive for the virus, report shows

Just two per cent of passengers put up in the Government’s £385 million quarantine hotels ended up testing positive for Covid, a report has found.

Arrivals from 33 ‘red list’ countries had to pay £1,750 to spend ten days in self-isolation at a designated hotel.

But the managed quarantine service – including hotels, security, transport and tests – cost £757 million between February and December 2021.

The National Audit Office found only one in 50 quarantined guests tested positive in that period.

While £428 million was recovered from passenger fees, taxpayers were left with a net cost of £329 million.

Paying for extra Border Force staff, the passenger locator form system and follow-up costs added another £157 million to the bill.

Just £3million was recovered from passenger fines – leaving a total cost to the taxpayer of £483 million.

John O’Connell of the TaxPayers’ Alliance said: ‘While the Government had to react quickly to Covid developments, taxpayers will question the scale of squandered cash.’

Labour MP Dame Meg Hillier, who chairs the Commons Public Accounts Committee, said: ‘The Government never really got a handle on the numbers or whether its border measures worked effectively.’

Gareth Davies of the National Audit Office conceded ministers ‘had to balance many competing objectives when managing the border’.

A Government spokesman said the measures ‘bought vital time for our domestic response to new variants’.

Four patients died, and two needed antibody therapies and antivirals to shake off the infection. Two eventually recovered without treatment.

The ninth patient is infected with the same bout of Covid they caught 412 days ago.

If they fail to clear the virus by their the next follow-up, they will eclipse the 505-day record set by the other patient.

In total, the nine patients had battled Covid for an average of 72 days before either recovering, dying, or the study ending.

The team also spotted a case of an ‘occult’ infection.

This is described as being when someone is thought to have recovered by testing negative, only to later be found still harbouring the virus.

This phenomenon — different to ‘long Covid’ — is seen with other pathogens, such as Ebola and hepatitis B.

Immunocompromised individuals are particularly vulnerable to Covid because their body’s natural defences are much weaker.

For this reason, the NHS says they should have had four jabs by now.

Their weakened immune system means they have trouble recovering, meaning they harbour the virus for longer.

This can give the virus time to mutate inside their body, potentially leading to a new variant that can go on to infect others.

Some experts suspect this is what was behind the emergence of the super-mutated Omicron variant, which swept the world in late-2021.

The UK team’s findings support this theory, with regular genetic sampling collected from the patients revealing that five developed at least one mutation seen in known Covid variants of concern.

One patient’s virus went on to develop a total of 10 mutations that also separately evolved in the Alpha, Gamma and Omicron variants.

However, he added it remained unknown whether this was the origin for strains like Omicron.

‘It is important to note, however, that none of the individuals in our work developed new variants that became widespread variants of concern,’ he said.

‘Immunocompromised patients with persistent infection have poor outcomes, and new treatment strategies are urgently needed to clear their infection,’ she said.

‘This may also prevent the emergence of variants.’

Genetic analysis of this virus showed it was a version of the Alpha variant, which was extinct in the UK by the time their symptoms returned.

This, the authors claimed, suggested the virus had remained dormant in the patient’s body months after the initial infection.

The patients were recruited to the study between March 2020 and December 2021 and had tested positive for the virus for at least eight weeks.

Most people recover from a Covid infection within a few weeks according to the NHS.

The researchers presented their findings to the European Congress of Clinical Microbiology and Infectious Diseases in Portugal.

This is the Best Leg Workout for Absolute Beginners

Best Things To Know About Big Data And Data Analytics