Playdate is a refreshing and unique gaming handheld, but keep your expectations weird – TechCrunch

Everyone thought it was a little bonkers when Panic announced that they would be making a monochrome handheld gaming machine with a sort of subscription model where you can’t choose the games you get. DOA, right? Well, the preorders sold out so perhaps not. And fortunately, Playdate is a fun, weird and promising device that’s exactly what it sets out to be, and for those attracted to its funky aesthetic and games, a worthwhile purchase.

The original idea of the Playdate was a truly pocket-size gaming machine that set itself apart not just with a black-and-white screen and the inclusion of a crank for gaming gimmicks, but a scheduled release of games that would appear automatically and regularly … a play date.

Unexpected levels of interest from gamers (20,000 first batch units sold out even at the rather high asking price of $180) and developers interested in something new and weird led them to expand the first “season” of games to 24, sweetening the deal somewhat. After a few delays due to COVID and the chip shortage, the Playdate is finally shipping, and Panic was kind enough to send TechCrunch one to test out, with games arriving on an accelerated schedule.

So how is it? Fun and weird — like an indie game or film that asks you to engage on its own terms, the Playdate is its own thing and comparing it to other devices isn’t really productive.

First, the device itself. I love it. It’s button cute, banana yellow and Post-It-small. Panic and their partners at Teenage Engineering really nailed the look and feel.

On it you’ll find a directional pad, A and B buttons, menu and power buttons, and of course the famous crank. The D-pad is a little soft but works fine; the main buttons are pleasant to use. And when gripped like a traditional handheld it is quite comfortable even for medium-large hands like my own. I wouldn’t want to play for hours at a time but that’s not the intent here.

The crank has a lovely, smooth feel to it, and it’s remarkably precise in games that use it, giving an almost analog level of precision. There’s enough friction that you never move it more or less than you want, but it’s easy enough to spin that you can do full loops without any trouble.

Where there is a bit of trouble is in how exactly you’re meant to hold the thing so you can hit the A and B buttons while turning the crank. I’ve found something that more or less works for me, but you end up sort of bracing your hand on the buttons themselves to get the leverage needed to crank, or vice versa. It’s not ideal, but fortunately few of the games require this level of dexterity.

The 400×240 screen is a mixed bag. With no backlight, you’re reliant on ambient light to see it, but since it’s glossy, you end up with reflections of the window or lamp if it’s in the best position. I’ve played plenty without cursing or being really bothered by this, but there’s definitely some level of “OK, I need to swivel my chair and hold it here, now tilt it … perfect” so you get in that sweet spot. (It’s also incredibly difficult to photograph well. But screenshots don’t capture the feel of it.)

Those idiosyncrasies aside, the graphics are sharp, fun and quite expressive. Every developer has found different ways to make the 1-bit look work, with an overall aesthetic like that of old Mac Classic games. If you were worried everything would be stick figures and text … be assured there’s plenty of creativity and fun on display here. And they all play fluidly and responsively.

The sound is also quite good — the graphics make you expect the kind of beepy fare we got back in the old Mac days, but there’s great, modern (or modern retro) sounding music and sound for each game. For some the sound is inextricable from the gameplay, like one where you have to match short music clips to each other.

But is it fun? 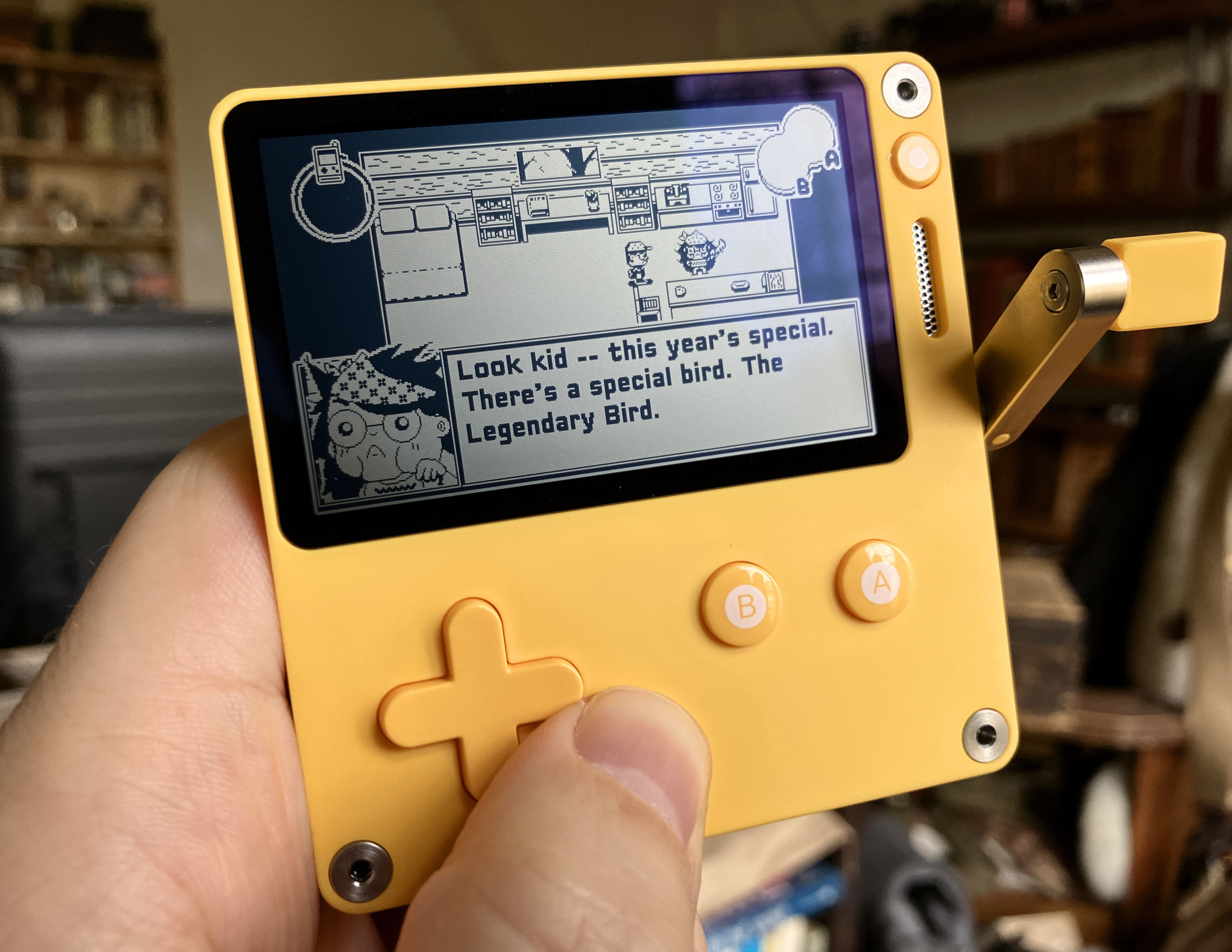 There are 24 games in the first season, which will trickle into every Playdate twice a week for 12 weeks. (Reviewers had them arrive over 12 days.)

I won’t go through the whole list — part of the fun is waking up, seeing “New Game Available!” and then checking it out while you sip your hot morning drink of choice. But it’s fair to say that sometimes you’ll be pleasantly surprised and engaged on and off all week, while other times you’ll be like … “Wait, what? I don’t get it.” Or Tthat’s it? Weak.”

Generally the games fall into one of three categories for me: My Jam, Cool But Not My Jam and Eh.

One of the first games to be unlocked, Casual Birder, is My Jam. It’s a weird little RPG filled with charming interactions and a bunch of birds to take pictures of. You focus with the crank while framing with the D-pad, but it makes things feel pleasantly frantic as you track a flying bird to its nest, rather than frustrating. 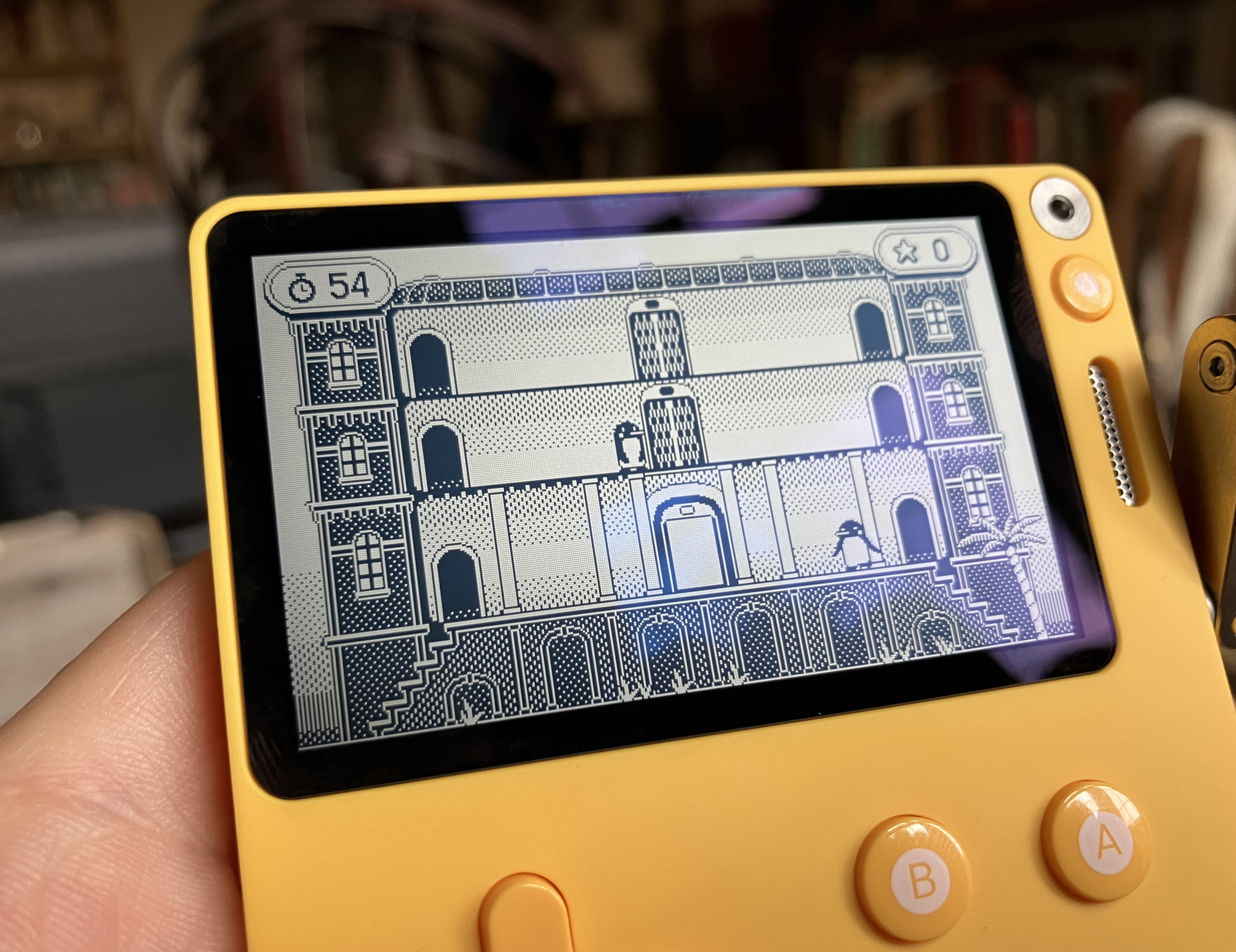 This is in the first few seconds of the game — it gets really chaotic after a couple minutes. Image Credits: Devin Coldewey/TechCrunch

Another I liked a lot is Flipper Lifter, where the crank controls the position of an elevator that penguins line up to use (and they’re really in a hurry, my god). When I “unwrapped” it (there’s a charming little animation that removes the paper from each game) I intended to just try it very quickly to get a sense of how it controlled and ended up playing for 20 minutes straight because it felt so right. And that was just on the first level! Definitely My Jam.

Then there’s another early game, Whitewater Wipeout, that’s Cool But Not My Jam. You control the direction of your surfer with the crank and can adjust their motion with the D-pad. I can’t seem to get my brain to wrap around the rotation and end up wiping out unexpectedly even on a good run. It’s much more arcade-y but after I got a decent score I felt like I had “consumed” this particular game. But it would be fun to pass back and forth to try to beat a score, and others may find it very much Their Jam.

Then there’s Boogie Loops, a sort of sequencer (I think) that might be fun to play with if I had any idea what any of the buttons, switches or dots on the timeline did. I spent two minutes trying to figure it out and then quit. Eh. 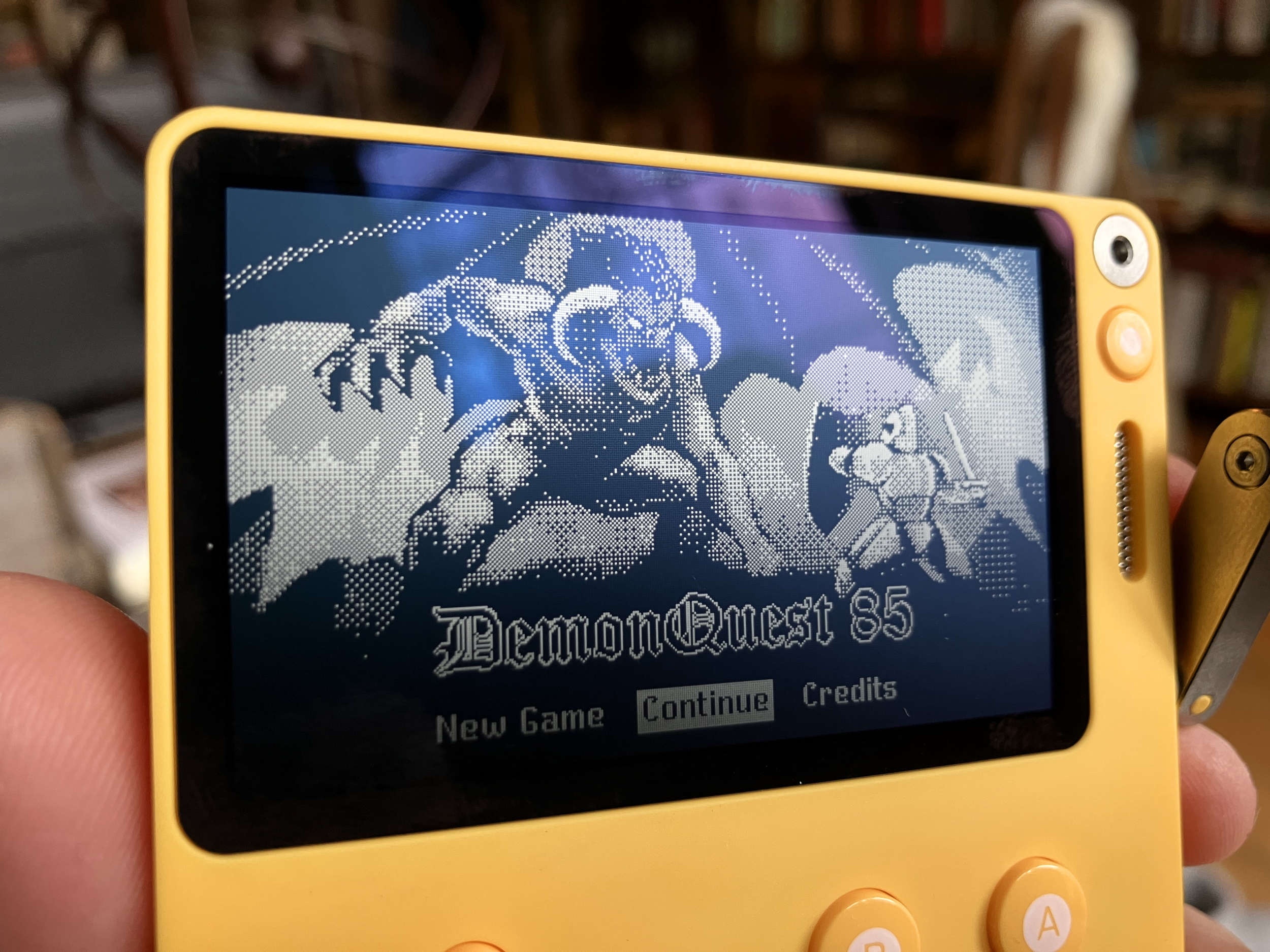 I’d say the breakdown of the 24 games is about 25% My Jam, 50% Cool But Not My Jam and 25% Eh. I feel like that sounds bad, but I really enjoyed trying all of them and seeing how each used the crank in a new and interesting way. Some are puzzles, some action, some puzzle-action, some adventure and not all have any kind of gimmick at all. One is just a variant of Snake. What’s it doing here? It’s fun and Zach Gage is great … but it’s basically Snake.

What’s conspicuously absent is any kind of “traditional” Mario/Kirby/Gradius-style action or platforming game — there are a few focused on reflexes and positioning (depending on your facility with the crank this can be exhilarating or maddening) but for the most part these are a bit more funky and slower paced. I can’t wait to spend more time with some of the RPG type games.

Playdate’s main value proposition is the 24 games you’ll get in the first season. And for some, that and the uniqueness of it all justify the $180 price point. But the idea is that Playdate will be supported beyond the now, first of all with a probable second season of games (there are no concrete plans but it has been implied) for sale as a bundle. 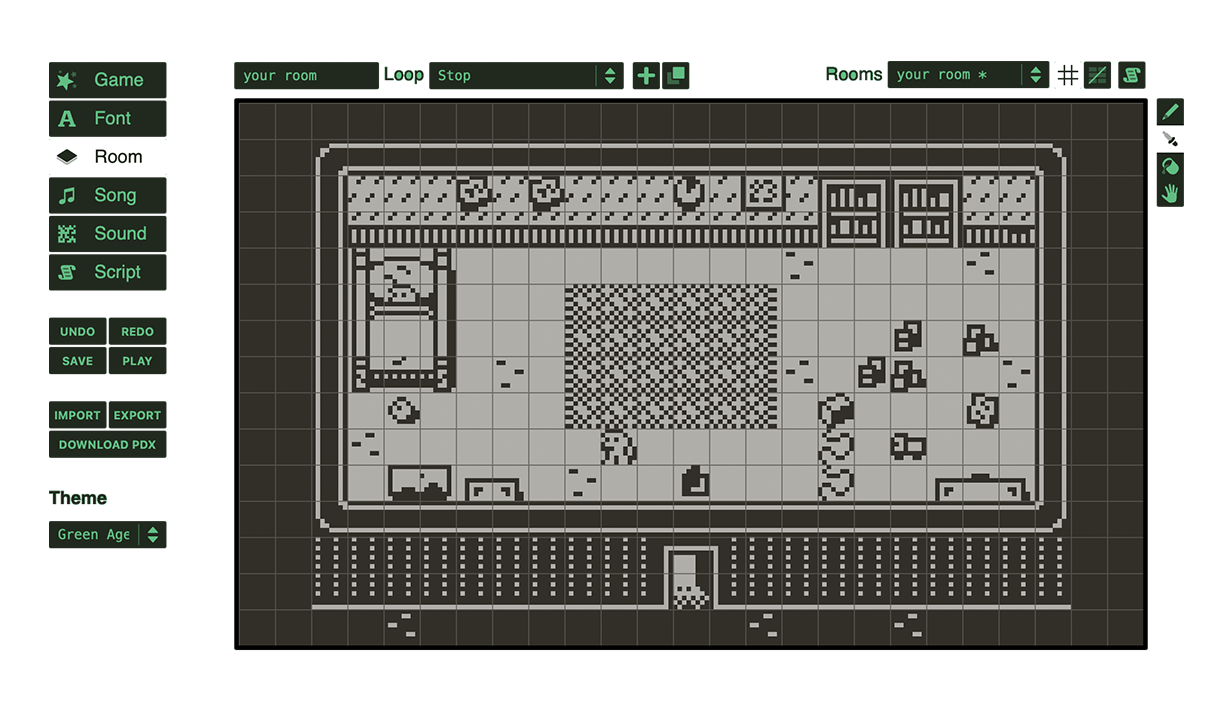 More immediately there is the Pulp game creator, which I did not even attempt to try (having no creativity or skills whatsoever in that domain) but which could be a source of many a non-official game — other dev methods are supported as well; this is just their own platform. It’s easy to sideload these via the SDK and simulator — slightly more involved than dragging and dropping, but not much.

I added the additional game Bloom by this method and it worked perfectly. The game also appears to be My Jam — you plant flowers to sell in your shop but they take real time to bloom, so you have to come back to it every day. Cute! This might be the kind of thing you get as a Patreon reward or downloaded from Itch.io or the like.

The hope is that the Playdate could become a mini-scene for indie game devs looking for a built-in audience, sort of like the Pico-8 community. How I wish I had a real Pico-8! While I wouldn’t expect the next Elden Ring to come out on this handheld, it’s entirely possible that quite a few fun games will be made or ported to the platform.

Is this all enough for you to pay $180 for a Playdate? Well the fact is most people smashed that preorder button more or less sight unseen because they love the idea so much. I would say that you’re probably already either into it or not, but if my opinion carries any weight here and you’re undecided, I’d say maybe wait a couple months to see how the first season of games is received, and whether the community starts pumping out fun new experiences. I suspect that the Playdate will eventually more than justify itself but caution is understandable given the “surprise” nature of the games.

In its current state the Playdate is a somewhat expensive but definitely one-of-a-kind experience; one that is clearly attractive to many people but the charm of which may elude others. In a few months when more games, accessories and other pluses have rolled out, that equation will likely only change for the better.

Choosing the Right One for Your Business –

Did Benjamin Franklin really discover electricity with a kite and key?