Blackmagic Design has unveiled a raft of new products including the DaVinci Resolve 18 video editing/color correction app and Blackmagic Cloud, a cloud collaboration system designed for editors, VFX artists and others. It also launched the “Cloud Store” networked storage box that uses a familiar-looking enclosure.

A big part of that is the Blackmagic Proxy Generator App, which automatically generates smallish proxy video files (H.264, H.265 and Apple ProRes) that can be transferred quickly by internet. The idea is that remote editors can complete their work on proxies, then the colorist or VFX editor could automatically relink to the much larger original camera files. It also has new intelligent media location management, eliminating the need to manually relink or search for video, music and other assets.

Resolve 18 also introduces new creative features, with the biggest being a new object mask that can recognize and track thousands of types of objects. “The DaVinci Neural Engine intuitively isolates animals, vehicles, people and food, plus countless other elements for advanced secondary grading and effects application,” Blackmagic wrote in a press release.

It also lets you create a 3D depth matte of a scene to quickly color grade the foreground separately from the background. Another cool feature it demonstrated was a warp tracker that lets you create a mesh over complex objects like the logo on someone’s T-shirt, then erase it or replace it with something else in a way that looks natural and realistic.

There are a host of other new features like “ultra beauty” for corrective beauty work, new transitions, improved subtitle support and more — check Blackmagic’s press release for a detailed list. DaVinci Resolve 18 beta is now available to download for free, or you can pay $295 for the Studio version.

Blackmagic also announced Cloud Store, a networked storage box that uses the same enclosure as its eGPU for Intel Macs. The idea is that you can load it up with 20TB, 80TB or 320TB of storage built from high speed M.2 SSDs. It uses a RAID 5 configuration for fault tolerance and has enough speed to completely saturate the four 10G Ethernet connections. “It’s so fast, multicam editing is incredibly smooth, even if it’s used with massive digital film camera files,” the company said.

Blackmagic used the eGPU box as it has a reasonably professional look, and it’s also nearly silent so it can be placed right on a desktop. Each port can be plugged into a separate computer or used together for 40G Ethernet. It has a USB-C to Ethernet adapter built in so it can be plugged directly into the USB-C port on a laptop for location work, for example. It can sync footage with multiple editors using Dropbox files, which can automatically be moved to the Blackmagic Cloud for collaboration.

The Cloud Store is designed for professional installations, so it’s priced at $10,000 for the 20TB model and $30,000 for the 80TB model (that storage includes the extra RAID 5 parity drives required). There’s no pricing for the 320GB box, but it might be over $100K. If all that’s too much, Blackmagic Design also unveiled the Cloud Store Mini priced at $3,000 for 10TB with fewer ports and RAID 0 (no redundancy), along with the $395 Cloud Pod, a “bring your own disk” setup with 10G connectivity. 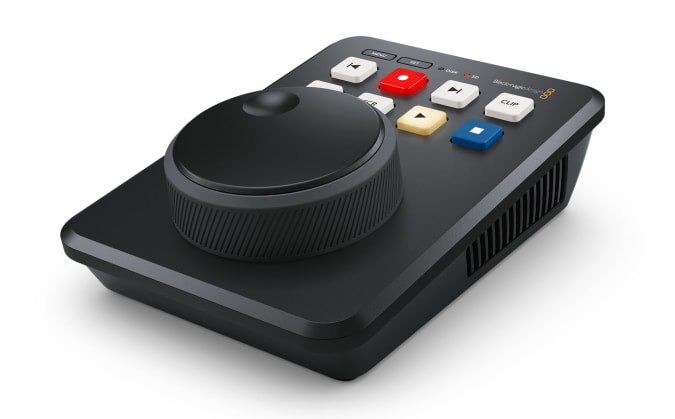 Finally, Blackmagic launched the HyperDeck Shuttle HD, a recorder/player designed to be used on the desktop with products like the Atem Mini switcher. You can playback media from USB-C disks or SD cards, or record an HDMI signal from a camera or other source. From there, you can scroll through footage using the jog dial and even use it as a teleprompter. The HyperDeck Shuttle HD is now available for $495.