Are you thinking about the sports betting lines for this season’s NBA playoffs? We would not be surprised, and if you are considering the Brooklyn Nets, we couldn’t blame you.

The Nets have been around since 1967, and while they’ve had a rocky past, they have recently come into their own. It is nice to see, when an underdog becomes the big dog.

Okay, they’re not exactly like the Harlem Globetrotters were in their heyday, but they’re still rocking the world much more than they used to be.

But, instead of going on about it, let’s look.

We will take you on a journey, learn the roster, their history, and their current game stats.

History Of The Nets

So, we know their current roster, and these are the guys who are changing things for the Nets right now. But, what about before? Where did the team come from, and how have they turned things around?

Let’s have a look.

The Nets are a member of the NBA, playing in the Eastern Conference. They have won 2 championships, one in 1974, and the other in 1976, so it has been a while.

They were founded in 1967, known as the New Jersey Americans in their first teams, and they began their home play in Long Island from 68-69.

They advanced to the finals in the 71-72 season, they did not finish any higher than 3rd in their first 6 seasons playing.

In ‘73, they traded to get the superstar Julius Erving who turned things around and led them to a 25-win improvement on their last season. They won the title that season, and he led them to another in 76.

However, when the ABA and NBA merged, the Nets had to raise $8 million to join, and since they did not have many assets, they sold Erving to the 76ers, and things quickly got worse.

From 86-90 the team was plagued by injuries, their star center Darryl Dawkins only played 29 games in their 85-86 season due to a back injury. They acquired more stars later in hopes of picking the team back up, but Dawkins slipped in his tub and suffered another injury.

Eventually they traded Dawkins, and they thought it was looking up. The universe had other ideas. Barley, Lee, and Tony Brown all got hurt at the beginning of their 87-88 season. What’s worse? Their leading scorer Woolridge was suspended due to substance abuse.

By the 90s they thought things were looking up. They were improving due to a draft and plenty of new faces. They improved well in their ‘92-’93 season, however, the injury bug came back, and Anderson and Petrovic were also injured towards the end of the season.

This led to another slump, and it continued into 1996.

They really had some poor luck!

Things really did not get better for a while, but in 2012 they eventually returned to New York, after they had secured a deal. They were renamed the Brooklyn Nets upon their move, and they became the first team to play in Brooklyn since the Dodgers left.

They became the Brooklyn Nets on the 30th April in 2012, and they rebranded themselves, which led to an influx of merchandise sales. They made 10 times of what they did in a typical year on their first two days of it being released.

This was what they needed, and in their first months of the 2012-2013 season they led the NBA in merchandise sales.

From 2012-2015 they had an era of their beginning in Brooklyn, and had some real playoff contention. They still had not seen a championship game in decades, but things were looking up.

However, after this they did have some struggles and spent time rebuilding. 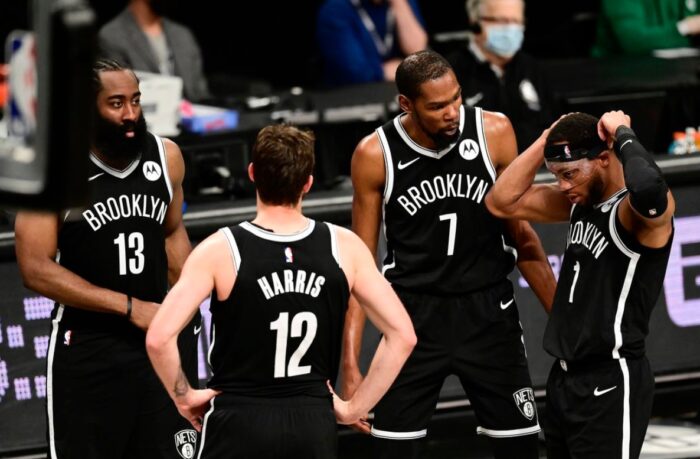 After 2018, things have been looking better for the Nets. They traded Mozgov and picked Dwight Howard who was waived later.

Russell became the first player for the nets in 5 years to make an NBA All-Star team, and this signaled their comeback. Led by Russell, with some new draft picks, and some pickups, they went above and beyond everyone’s expectations in 2018-2019.

They managed to make the Playoffs with a record of 42-40, they lost to the 76ers in 5 games of the first round, but this was a start.

Eventually Durant signed with them in 2019, and Irving later that year, making the 2019-2020 season much hotter. They played really well and clinched another playoff berth.

In 2021 the Nets had 3 players named All-Star on their team, and by February 2022, they traded with the 76ers for Ben Simmons, Seth Curry and Andre Drummond, and on March 15th Irving scored a record for the franchise of 60 points in a 150-108 blowout!

So, it’s safe to say, things are really looking to turn around for the Nets. All betting lines are looking bright for them including the sports lines from Fanduel.com

How Are They Doing Now?

Well, let’s look at how they’ve been doing so far in 2022, we know they recently traded, and Irving has been making magic happen. But, what else is there to know?

Well, since Irving’s epic record on March 15th, the Nets have won 8 out of 13 games.

We all know that the Miami Heat is a pretty hot to trot team, maybe not as much as they used to be, but they’re still… bringing the Heat!