Defense has taken the spotlight in Meralco-Ginebra series, as this is the only way the Govs’ Cup can be won, says Black

Tony Bishop Jr. rejects a Scottie Thompson layup to typify the tough defensive stand of the Bolts in this series. —PHOTOS FROM PBA IMAGES

Brownlee reinstalls Kings as title favorites, himself as standard for other imports

Norman Black has been saying it all along: If there’s anything that will lift Meralco past Barangay Ginebra in this Governors’ Cup finalé, it’s going to be defense.

And with that drilled in their minds, the Bolts played defense like there was no tomorrow last Sunday night, turning in a cutthroat performance at Mall of Asia Arena to hold their old tormentors to just 13 points in each of the two final frames for an 83-74 victory that eased them out front in this best-of-seven championship series, 2-1.

Meralco also shackled the defending champion Gin Kings to their lowest output this season since an 84-71 loss at the hands of TNT in the Philippine Cup quarterfinals.

But Black also tipped his hat to the Kings, who put the Bolts in holes as deep as 13 points in the first half.

They were able to climb out of that using mainly one thing, that’s right, defense.

It took a halftime pow-wow when Black talked about the late great national coach Ron Jacobs to fire up his Bolts to answer the second half horn with dogged resolve.

“I [told] them a story about how I remember the great coach Ron Jacobs telling me that if you (the opponent) shoot a very high percentage in the first half, and you are only up a few points, that is not very good,” he said. Meralco trailed, 48-40. “The other team certainly has a chance of coming back.

“So it was just a way of trying to get my players understand that we were still in the game,” Black went on. “That we still had a chance to come back. We just had to play a little bit better defense and play better offense, which we did in the second half.”

Save for an and-one play from the tireless Christian Standhardinger, it was all Meralco beginning the 6:22 mark of the payoff frame.

“We panicked down the stretch and we didn’t, obviously, hit shots,” said Ginebra coach Tim Cone. “We were going for hero-ball shots and [not] trying to get good shots. We got a little bit selfish. We weren’t moving the ball.”

But then again, the Meralco defense forced them to take those shots as a lot of Game 2 heroes for the Kings in a 99-93 win, like import Justin Brownlee, struggled. 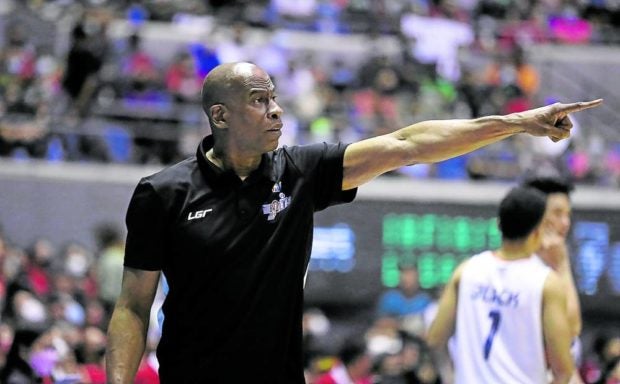 “I feel like this one is more so on us, you know,” said Brownlee, who was forced by Cliff Hodge to 1-for-10 shooting from three-point range. “Like I’ve said, give a lot of credit to Meralco, but I really feel like we kind of beat ourselves, you know, not making free throws. We also didn’t hit the shots that we normally make.

“A lot of credit to Meralco, but I feel like this one is on us,” he went on.

Hodge highlighted how hard the Bolts worked defensively, when he blocked a Standhardinger short stab and then drew a charging foul from the transitioning Ginebra center in the next play.

Hodge was scoreless for the night, but was clearly the catalyst of the hard-nosed Meralco defensive stand.

Meralco actually shot worse from the field—35 percent against Ginebra’s 40—but that spirited second-half effort truly changed the complexion of the contest witnessed by a league pandemic era record of 16,104 spectators.

The two clubs go at it again this Wednesday when the series returns to Smart Araneta Coliseum, with Ginebra to welcome back Japeth Aguilar.

But Black insists Meralco has been ready since.

Our Garden and Yard Plans for 2022

Brownlee reinstalls Kings as title favorites, himself as standard for other imports

One Piece: When did it start?

Preview, predictions, what to watch for

3 Tweaks to Improve Your Google My Business Listing