19 Best Sheets For Every Type of Sleeper in 2022: Brooklinen, Riley Home, Parachute, and More

Kylie Jenner knows how to make a statement. When the beauty mogul didn’t arrive on time to the premiere of The Kardashians on Thursday night, many assumed she opted out of the event. She had missed much of the family’s promo tour ahead of the new show. Instead, though, Jenner was just fashionably late, meaning when she finally did arrive, all eyes were on her and her custom white latex gown. And while her tardiness meant she wasn’t able to take photos with her sisters, Jenner did share some shots after the fact to really show off her red carpet look.

The evening represented an important moment for Jenner. Not only because it was the premiere of her family’s new reality show, but it also happened to be her first red carpet appearance since she welcomed her second child with Travis Scott in February. At the event, Jenner wasn’t shy about showing off her postpartum body, opting to match her sister, Kim Kardashian, in a skintight, latex dress. While Kardashian’s look was designed by the late Thierry Mugler, however, Jenner’s was a custom Coperni piece based off a pink dress from the brand’s autumn/winter 2022 collection, which Gigi Hadid modeled on the runway. The dress featured two slits on the bottom and another across her chest, highlighting a bodice adorned with latex rosettes, one of which sat atop her shoulder next to the boat neckline. When it came to styling, Jenner kept things pretty simple, pulling her hair back to show off some diamond earrings, and wearing a matching pair of white latex boots, a custom design from Amina Muaddi and Coperni.

Jenner has clearly been on a Coperni kick lately as the premiere look comes just a day after the mom of two wore two others designs by the relatively young Parisian brand. On Wednesday, Jenner showed off the glass Swipe bag, the hottest accessory of the season, mostly thanks to its unique material choice and unexpected functionality. While the bag would have also fit with her red carpet look—and Hadid did carry it while originally modeling the dress—Jenner isn’t really one to wear anything twice, especially a bag as memorable as the horned Swipe. She clearly isn’t afraid to pull from the same collection, though, because later Jenner joined her sister, Kendall, to take in a Phoenix Suns game, where she wore a jumpsuit and cargo boots from the same autumn/winter show.

The onslaught of Coperni begs the question: Is Jenner following in the footsteps of her sister and becoming a one-brand woman like Kardashian did recently with Balenciaga? While it would be fun to see co-founders Sébastien Meyer and Arnaud Vaillant get the press that would undoubtedly come if Jenner started only wearing the label, and Jenner may be sprinkling more Coperni in her wardrobe in the future, it seems unlikely she would save herself for just one brand. But hey, she’s clearly a fan, so you never really know. 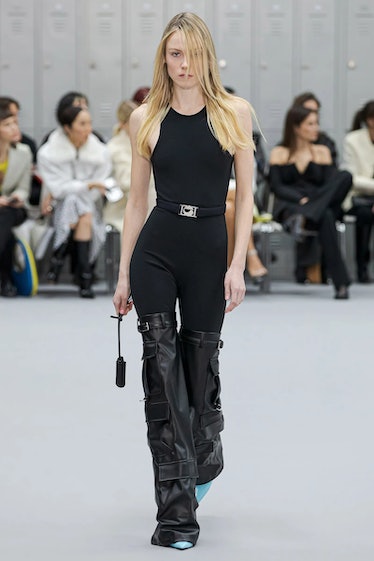 8 Tips for Wintertime Back Pain

Remember when redistricting kept population growth in mind? Not today, not in Georgia