One of Pakistan’s twin crises was resolved this week. The other one, not so much.

On Thursday, the country’s supreme court delivered a historic ruling that resolved a constitutional crisis that took shape last week. The court rebuked Prime Minister Imran Khan, a self-fashioned populist leader and former cricket star who is more celebrity than statesman. Khan, the court ruled, had acted unconstitutionally when he dissolved Pakistan’s Parliament last week in order to avoid losing power through a no-confidence vote.

It was a surprising and reassuring decision, experts in the country’s politics said, given the supreme court’s checkered record as a sometime political ally of Khan. On Thursday, the court sided with the rule of law.

But the underlying political crisis that led to the court’s landmark order endures.

Khan outlandishly blamed the opposition parties’ efforts to oust him on a US-driven foreign conspiracy. Now, the Parliament has been restored and will continue with its no-confidence vote against Khan’s premiership Saturday, likely leading to his ouster and extraordinary elections later this year. Khan, for his part, said that he would “fight” back.

The broader political crisis, however, can be traced to the 2018 election that brought Khan to power. Traditionally, the military is the most significant institution in Pakistan, and it has often intervened to overthrow elected leaders that got in its way. Khan’s rise is inextricable from military influence over politics, and the incumbent prime minister accused the military of a soft coup for manipulating the election in Khan’s favor.

It was a “very controversial election,” says Asfandyar Mir, a researcher at the United States Institute of Peace. “There was a major question over the legitimacy of that electoral exercise and the government that Khan formed could just never escape the shadow of the controversy surrounding that election,” Mir explained.

Pakistan’s cricketer-turned-politician Imran Khan speaks after casting his vote at a polling station during the general election in Islamabad on July 25, 2018.

More recently, the relationship between the military and Khan has worsened, and that gave the political opposition an opening to act against him. Though it’s not known what role the military played in the supreme court’s ruling, experts note that the harshness of the court’s order suggests the military’s buy-in. “This is part of a larger history of instability in Pakistan in which prime ministers are ousted from power, because they lose the support of Pakistan’s military,” Madiha Afzal, foreign policy fellow at the Brookings Institution, told Vox.

But “even if the court was influenced by the military, it took the right decision,” she says.

The political and economic situation set the stage for a challenge to Khan.

After running on a campaign that promised less corruption and more economic opportunity for the poor, Khan has failed to deliver. Inflation is climbing, unemployment is soaring, and a billion-dollar program from the International Monetary Fund has not helped stabilize matters. An international investigation into offshore money from last year, known as the Pandora Papers, showed that Khan’s inner circle had moved money abroad to avoid taxes, in contradiction with Khan’s populist rhetoric.

Khan presided over an anti-corruption witch hunt targeting opposition parties. Indeed, the opposition parties, many of them composed of dynastic leadership and families with old money, are corrupt, and their attempt to oust Khan can be seen as a move to evade further scrutiny, Mir said.

Still, that anti-corruption effort brought the government bureaucracy to a halt. And it’s part of Khan’s broader strongman-style approach to governing that has been ineffective.

Since his start in politics, Khan has depended on the courts. Yasser Kureshi, a researcher in constitutional law at the University of Oxford, says Khan has built his political standing on backing the judiciary. “Imran Khan’s political platform has been built around an anti-corruption populism, where he charges the political class for being corrupt, and in the last 15 years the supreme court has been on a spree of jurisprudence targeting the political corruption of Pakistan’s traditional parties,” he explains. “Khan has been the biggest supporter of this jurisprudence as it has validated and legitimized his politics.”

Now, the court appears to have turned against him at a time when the military has also lost faith in Khan. “With Imran Khan, I think that the problem for him is that right now, he has no institutional solutions that he can really turn to,” says Kureshi.

Khan’s relationship with the US has also cooled

Pakistan is a nuclear-armed country with a population of 220 million; it has built the sixth-largest military in the world, and has clout as a leader in the Islamic world. A longtime participant in the US war on terrorism, Pakistan has also been a conflicted partner, criticized for at times abetting the Taliban.

Khan was elected in 2018, and Mir says that, two years in, the military’s relationship to him began to cool. Khan feuded with the army chief over foreign policy issues, and the military saw Khan’s poor governance as a liability. Last year, Khan’s delays in signing off on a new intelligence chief prompted speculation of more divides between the two.

President Joe Biden did not phone Khan in his initial days in office, though he did call the leader of India, Pakistan’s chief rival. “The Biden administration’s cold shoulder to Imran Khan rubbed him the wrong way,” said Afzal. “Pakistan has just fallen off a little bit of the radar in terms of high-level engagement.”

Most recently, that chill was expressed by Khan’s decision to stay neutral in Russia’s war on Ukraine; Khan visited Moscow just in advance of Russia’s invasion.

And, now, he’s turned to accusations of conspiracy: that the opposition’s stand against him is manufactured by the US. The origins of Khan’s incendiary claims appear to be a diplomatic cable that Pakistan’s ambassador to Washington sent home last month after a meeting with senior State Department official Donald Lu. Whatever criticisms Lu may have conveyed about Pakistan’s foreign policy, Khan’s interpretation of the memo has clearly been blown out of proportion. “When it comes to those allegations, there is no truth to them,” State Department spokesperson Ned Price said last week.

It’s an open question whether his argument will resonate among a Pakistani populace who is suspicious of the United States. One group it’s likely not resonating with: Pakistan’s powerful military. 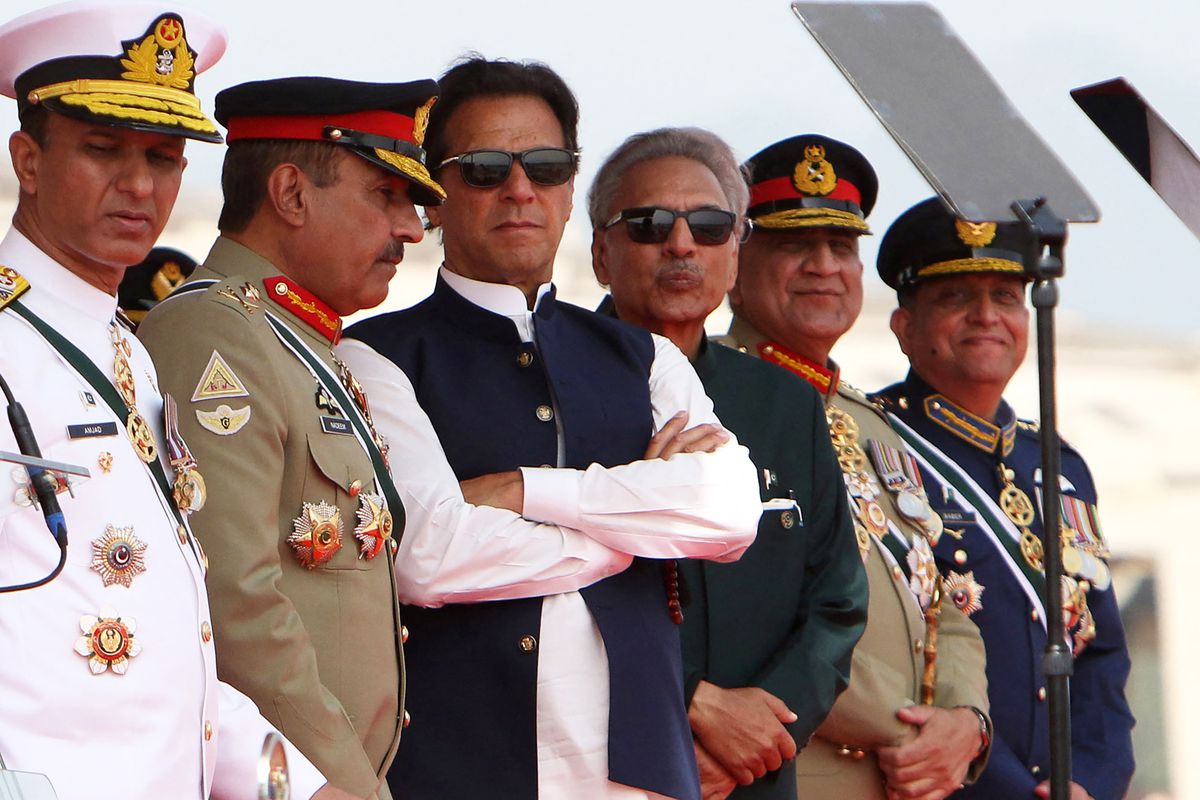 Khan is “critical of the United States to a point that makes the military uncomfortable,” said Shamila Chaudhary, an expert at the New America think tank. “The way he’s talking about the United States is preventing the US relationship with Pakistan from being repaired, and it needs to be repaired.”

Meanwhile, the Biden administration’s focus in Asia has been on great-power competition with China and two national security crises (the Afghanistan withdrawal and Russia’s Ukraine invasion). The sloppy withdrawal of US forces from Afghanistan furthered the disconnect between Washington and Islamabad, according to Chaudhary, and further upset Pakistan’s government.

Robin Raphel, a former ambassador who served as a senior South Asia official in the State Department from 1993 to 1997, described Biden’s outlook to Pakistan as a “non-approach approach.”

“I’m a diplomat, and, I believe you get more with honey than vinegar,” she said. “It would have been more than worth it for the president to take five minutes to call Imran Khan.”

The US did send its top State Department official for human rights, Uzra Zeya, to the Organization of Islamic Countries summit in Pakistan last month. Zeya also met with the country’s foreign minister and senior officials, as the two countries celebrated the 75th anniversary of diplomatic relations.

But there hasn’t been more than that in terms of a positive message for the US-Pakistan relationship in light of the recent political and constitutional crises in the country. Price’s recent comments on the situation were brief: “We support Pakistan’s constitutional process and the rule of law.”

Once the Parliament completes its no-confidence vote, which may happen as soon as today, it will dissolve the government. The country’s electoral commission will then oversee a caretaker government that will likely be headed by the leader of the opposition, Shehbaz Sharif. (Sharif is the brother of Nawaz Sharif, a former prime minister himself, who is currently living in exile in the UK as he faces accusations of corruption.) And, in that forthcoming vote, Khan will most probably lose.

But even the specifics of those elections are contentious. Khan had asked the electoral commission to set a date within the next 90 days; opposition politicians told NPR that reforms are needed before the next vote, otherwise they say the military will “rig” the next elections.

Long-term, things are even less clear. Among civil society leaders in Pakistan, there is agreement that the supreme court’s ruling is good for constitutionalism. But it may also be a vehicle for further expansion of the judiciary’s ability to intervene in politics.

Kureshi, an expert on the courts of Pakistan and how they have increasingly become the arbiter of politics in the country, says the bigger takeaways won’t be fully understood until the court releases the full text of its ruling in the next month or so. That detailed order may set other legal precedents and even cast the opposition in a bad light.

After the immediate euphoria of keeping Khan’s audacious unconstitutional maneuver in check, that judgment may say a lot about how the court sees itself, especially its supervisory role over the parliament and prime minister.

“The elected institutions are deeply constrained by the tutelage of overly empowered unelected institutions, whether it is the military, historically, or the judiciary more recently,” said Kureshi. “Judgments like this give them an opportunity to further affirm and expand that role.”

How China brutalizes its people to try to achieve ‘COVID Zero’

Monkeypox: What is it, and why is it spreading now?

Dynamic Search Ads 101: The Pros, Cons and How to Use Them