Around 50 people, including five children, were killed on Friday in a missile strike on a railway station in eastern Ukraine, the Kiev-appointed authorities claim in their latest statement. Both Russia and Ukraine have been trading accusations about the deadly attack.

On Friday morning, a rocket strike hit the railway station in Kramatorsk where thousands of people were waiting for evacuation trains ahead of the expected large-scale military action in Donbass. In a Telegram post on Friday afternoon, the head of the Kiev-appointed Donetsk Region administration, Pavel Kirilenko, revealed the revised numbers of injured and dead, which have been confirmed by both sides of the conflict.

“Fifty deaths, five of them children. We have such a large number of victims at this hour as a result of the attack of the Russian occupation forces’ Tochka U missile on the Kramatorsk railway station. At that moment, 98 people were taken to hospitals. We expect that other victims will seek medical help within one or two days, so the number of victims will be constantly changing,” Kirilenko, who initially claimed that the strike was carried out with an Iskander missile, wrote.

He said that out of 98 hospitalized people, 16 were children, 46 were women, and 36 were men. “Twelve of them died at the hospital. 38 people died at the station,” he wrote. 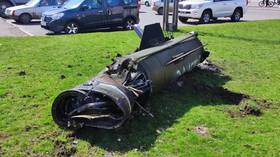 Meanwhile, the Russian Ministry of Defense claimed that the strike was carried out by “a missile battalion of Ukrainian armed forces from the Dobropolye city area.”

The Defense Ministry believes the strike was conducted “to disrupt the mass exodus of residents from the city” and to allow the Ukrainian forces to use civilians as human shields.

Western countries, however, were quick to blame Russia for the attack without any evidence. Top EU diplomat Josep Borrell took to Twitter to express condemnation for what he called an “indiscriminate attack against a train station in Kramatorsk by Russia.”

“This is yet another attempt to close escape routes for those fleeing this unjustified war and cause human suffering,” Borrell wrote.

UK Prime Minister Boris Johnson called it a “war crime” and said, “Russia’s crimes in Ukraine will not go unnoticed or unpunished.”

Kramatorsk is a city in the northern part of the Donetsk region, and is considered by the Donetsk People’s Republic as part of its territory. When hostilities broke out in eastern Ukraine in the wake of the 2014 Maidan coup, the city remained under Kiev’s control. 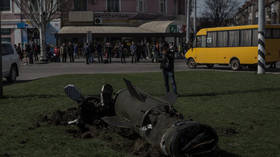 On Thursday, Ukrainian Foreign Minister Dmitry Kuleba said that the “battle for Donbass” is expected to be of such a scale that it would make the world recall the Second World War. These remarks followed the announcement by the Russian military that it had completed the first stage of the Ukraine campaign and was preparing to focus efforts “on achieving the main goal – the liberation of the Donbass.”

Moscow attacked the neighboring state in late February, following Ukraine’s failure to implement the terms of the Minsk agreements signed in 2014, and Russia’s eventual recognition of the Donbass republics of Donetsk and Lugansk. The German and French brokered Minsk Protocol was designed to regularize the status of the regions within the Ukrainian state.

Russia has now demanded that Ukraine officially declare itself a neutral country that will never join the US-led NATO military bloc. Kiev insists the Russian offensive was completely unprovoked and has denied claims it was planning to retake the two republics by force.

How to Budget for Holiday Gift Shopping

Ever Wondered What It’s Like to Be a Twin? Here’s Your Answer

Now That Elon Musk Has Offered to Buy Twitter, What Happens Next?