You know you’ve made it when you’ve had a whole generation of baby girls named after you. That’s the kind of next-level legacy that Ashanti has left in two decades and counting of R&B divadom.

“I’ve met plenty of people that are like, ‘Oh my gosh, I named my daughter after you,’ ” the singer, who was named after the Ashanti tribe in Ghana, told The Post. “And it really is a beautiful, beautiful feeling. You know what’s so funny? I Googled the popularity of [the name] ‘Ashanti’ before my album came out and then after it, and the difference is crazy!”

Such is the immediate impact that Ashanti Shequoiya Douglas had when she went from famously singing the hooks on Ja Rule’s “Always on Time” and Fat Joe’s “What’s Luv?” to becoming a solo star with her self-titled debut album, which came out 20 years ago on April 2, 2002. Instantly crowning the Glen Cove, Long Island, native as the princess of hip-hop soul with its trendsetting sound, the LP — featuring the hits “Foolish,” “Happy” and “Baby” — went triple-platinum and won her a Grammy for Best Contemporary R&B Album. And it firmly established a career that, bopping from music to acting, has led Ashanti to receive a star on the Hollywood Walk of Fame on Thursday.

“I can’t believe I’m getting a star,” said Ashanti, 41. “I’m so grateful and humbled and overwhelmed. And with the divine timing of it being my 20-year anniversary of my first album essentially in the same week . . . we couldn’t have planned that alignment.”

Getting discovered by Murder Inc. Records founder Irv Gotti through his former babysitter, Ashanti had her big break when she was featured on Ja Rule’s 2001 single “Always on Time,” which went all the way to No. 1. “To be honest with you, I think that song was supposed to be for Brandy, and she ended up not doing it,” she said. “And Ashanti came in and alley-ooped!” 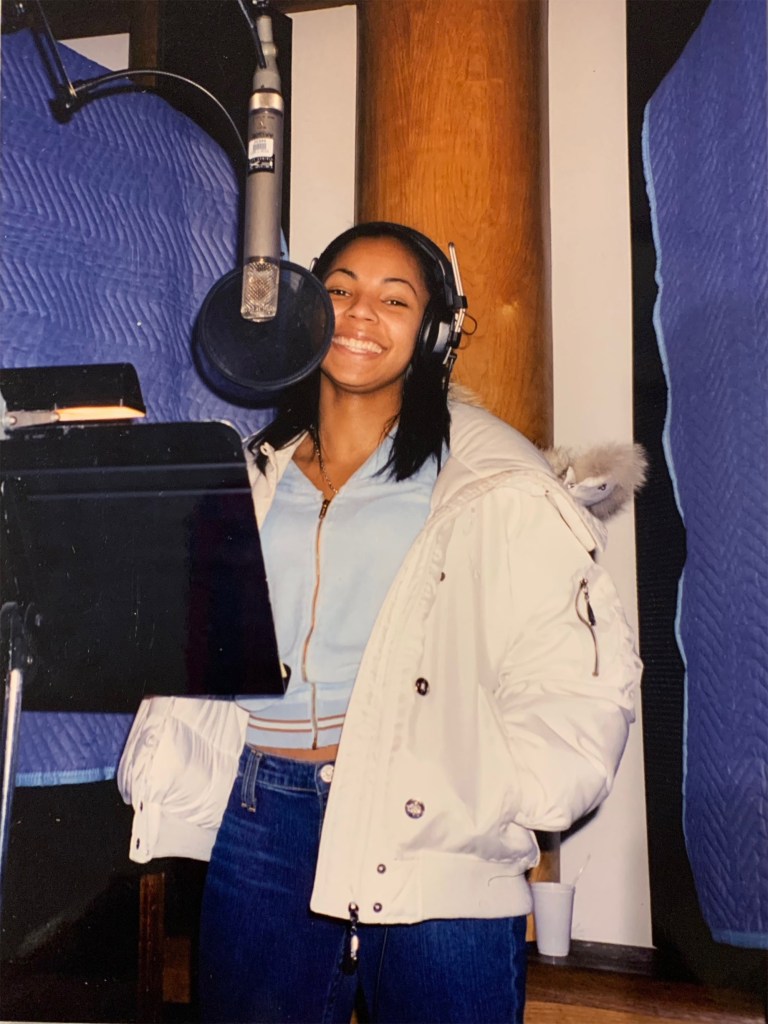 While recording her debut LP at the Crack House studio in Soho, 20-year-old Ashanti silenced the doubters with her songwriting ability.

After having “instant chemistry” with her Murder Inc. labelmate, Ashanti struck out on her own to make her debut album. During recording, she would drive into Manhattan from her parents’ home, where she had her own basement apartment, to the Crack House studio in Soho. “The name wasn’t because of drugs,” she said. “We were producing crack in hit records.”

In a male-dominated hip-hop scene, Ashanti was determined to prove herself both as a singer and a songwriter. “I just remember being a young girl from Long Island amongst all of these guys and gangstas in the studio, and they didn’t know if I could really write,” she said. “So they were always giving me tests. They would have to, like, watch me write, because they didn’t believe I was writing on my own.” 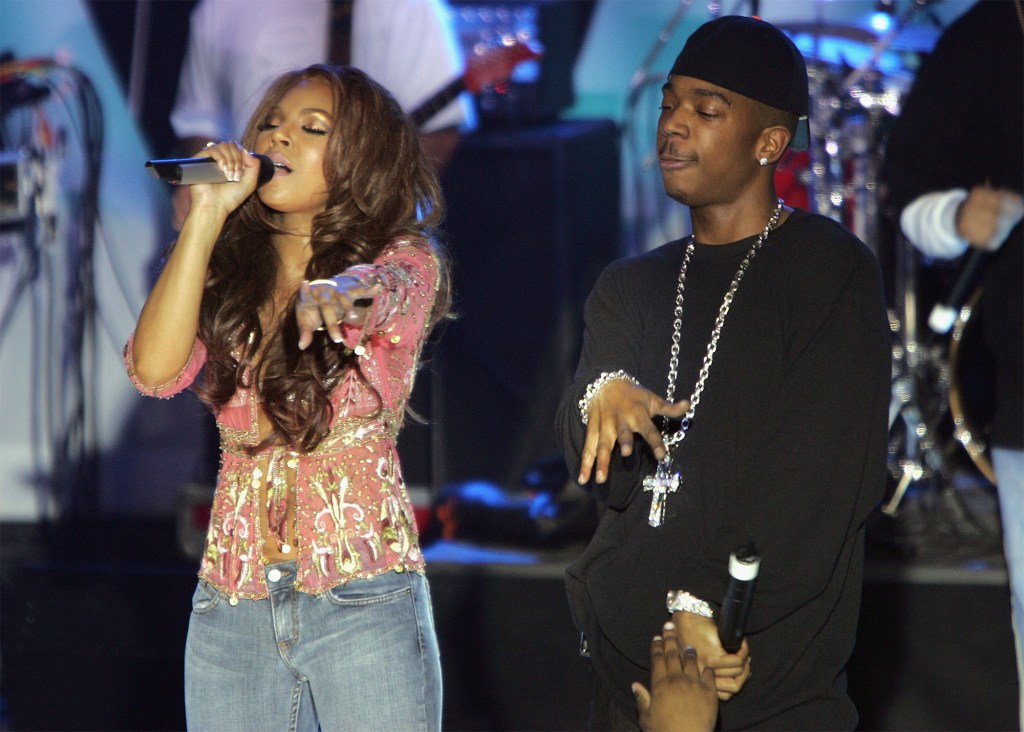 Ashanti performing with her “Always on Time” collaborator Ja Rule in 2004.Getty Images

But Ashanti would have a hand in penning every track on her debut album, including the first single, “Foolish.” Mixing her sweet, soulful vocals with hip-hop beats, the song defined the Ashanti sound.

“In my heart, I’ve always been a girl that loves hip-hop,” she said. “And for me, it’s always been the yin and the yang, the soft with the hard.” 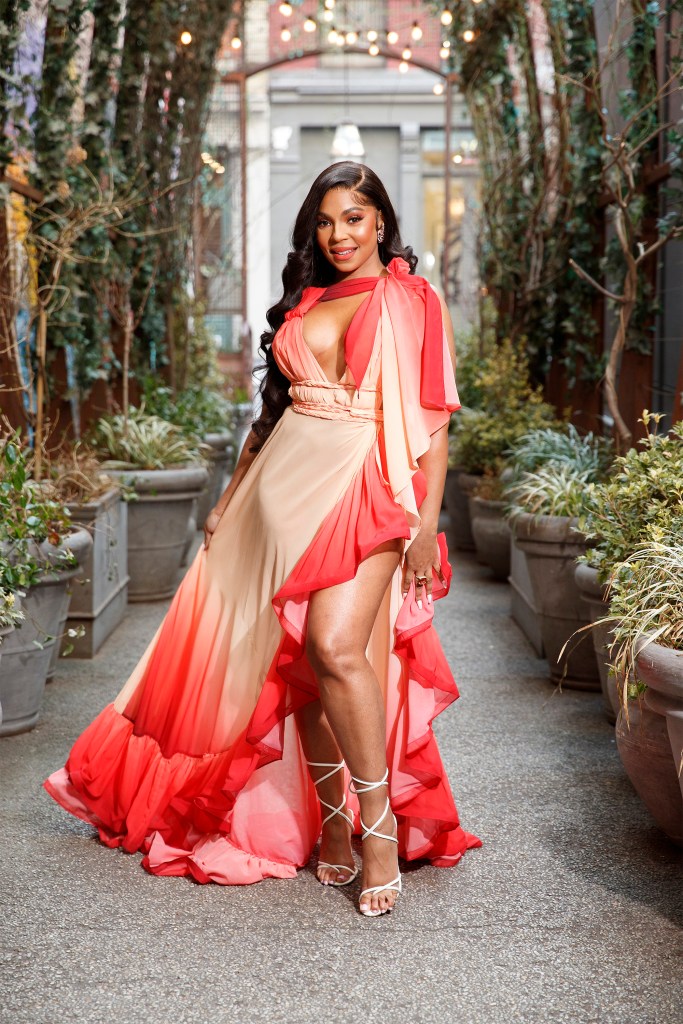 When “Foolish” reigned at No. 1 while “What’s Luv?” was No. 2, Ashanti became the first female artist to simultaneously hold the top two positions on the Billboard Hot 100. And suddenly, you could hear the Ashanti influence everywhere. In fact, there were those who accused Jennifer Lopez of stealing her sound because Ashanti had recorded the original demos for J.Lo’s “I’m Real” and “Ain’t It Funny” remixes, both featuring Ja Rule.

“Several people called me when ‘I’m Real’ came out and were like, ‘Oh my God, is that your new song?’ ” said Ashanti, who received co-writing credit for the “Ain’t It Funny” remix. “It was the Murder Inc. sound, so there were similarities. I guess it was just something that came with the business. But I try not to look at things negatively, so I try to take it as a compliment.” 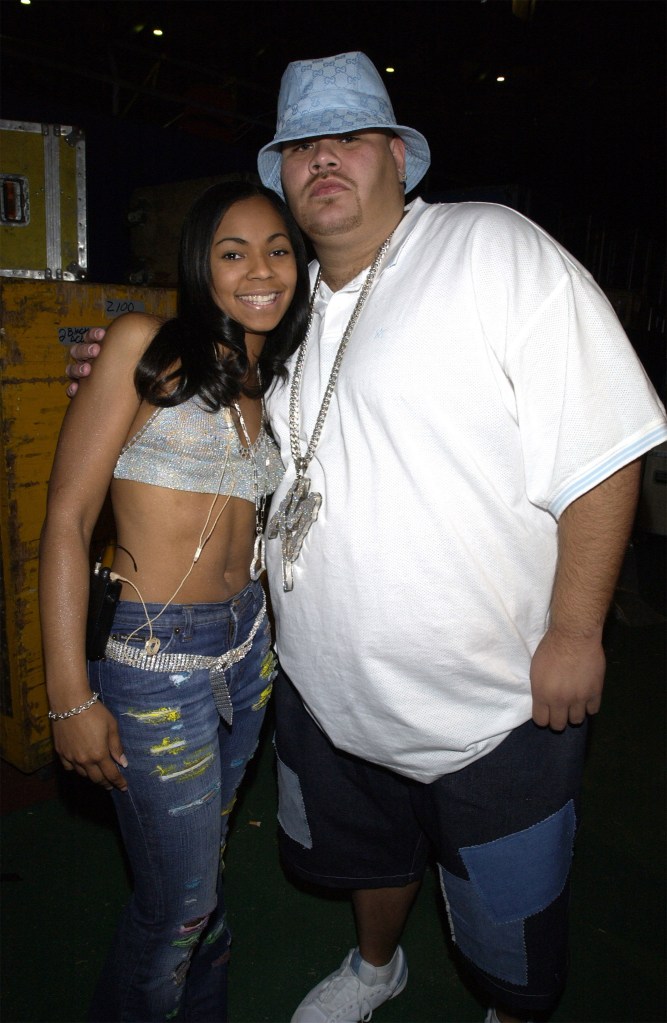 Ashanti and her “What’s Luv?” collaborator Fat Joe in 2002.WireImage

As her career was on fire, Ashanti also began a high-profile relationship with “Hot in Herre” rapper Nelly in 2003. The pair dated for 11 years before breaking up in 2014.

“There were good times, and there were times where it was hard . . . just traveling so much and living in two different states,” she said. “Our careers were, like, taking off back then. It was really hard to try and just do everything.” 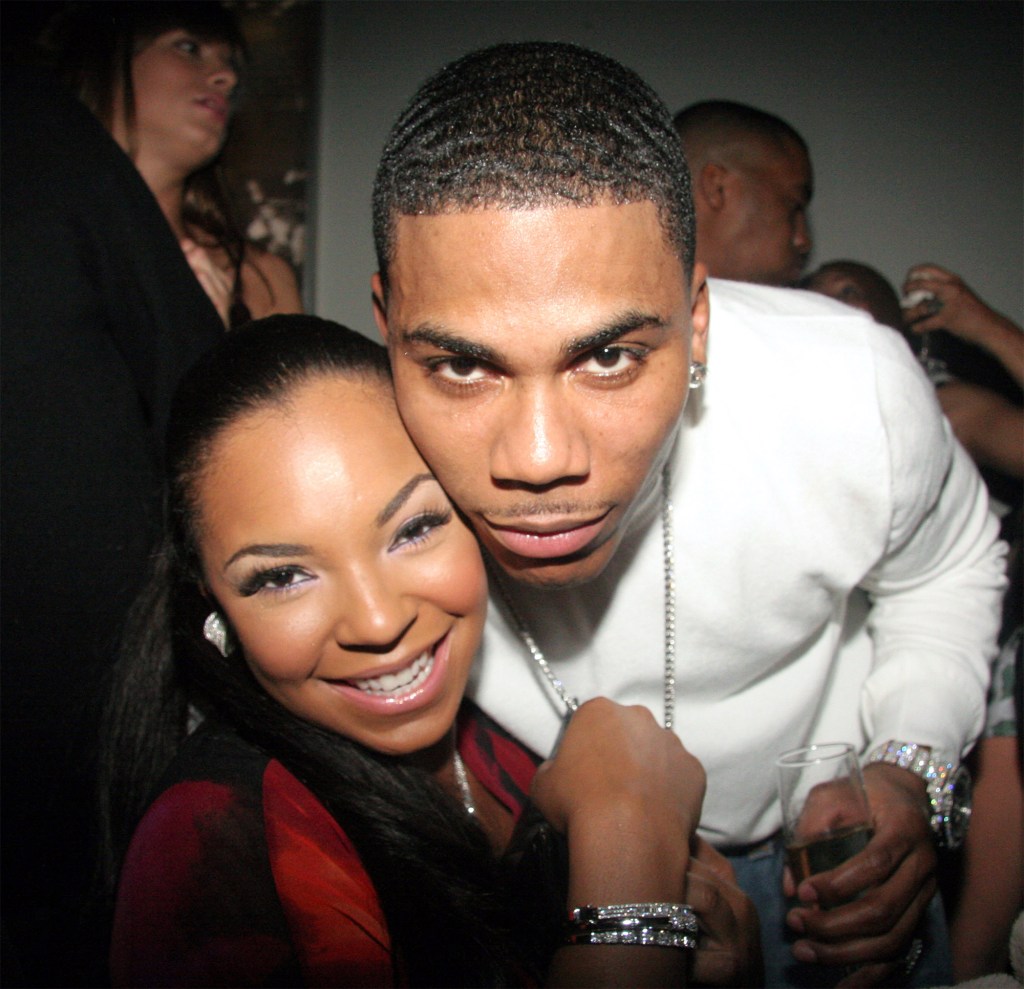 Ashanti and ex-boyfriend Nelly, who dated for 11 years, in 2006.WireImage

Now, Ashanti is completely comfortable with not marrying. “There have been situations that were very, very close to that,” she said. “I just want it to be the right person. My parents have been married for, like, 40-plus years. So, you know, that’s kind of like the template for me.”

Still living near her parents in Long Island, Ashanti maintains a close family connection. In fact, her mom, Tina Douglas, has served as her manager for her entire career. 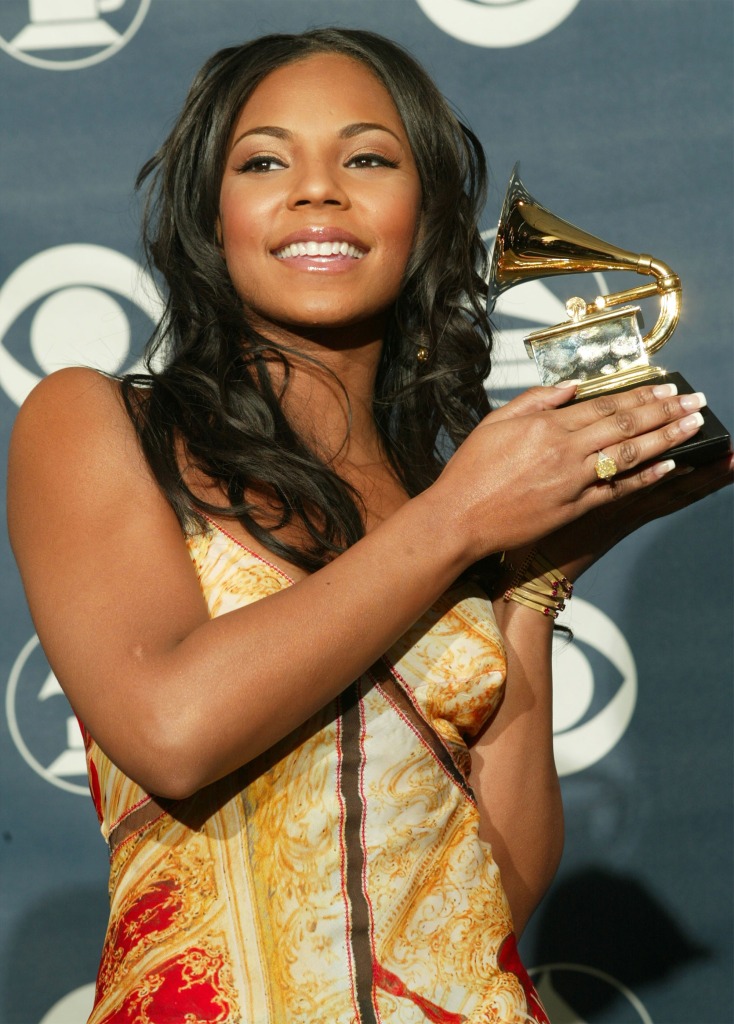 There’s certainly plenty for her “MOManger,” as she calls herself, to help her daughter juggle: Ashanti recently became co-owner of tech company EQ Exchange, which just announced an NFT collection to celebrate the 20th anniversary of her debut album. She’s also shooting a romantic comedy, “The Plus One,” with Cedric the Entertainer, while working on new music to come later this year. Plus, she has a children’s book, “My Name Is a Story,” due in July.

“It’s encouraging kids to be happy and feel OK about being different or having a different name,” said Ashanti. “You know, my name is different; it’s not common. But I want kids that have a different name to understand that that’s power in itself. Love your name. Love the fact that you’re different and you stand out.”

After Gorakhnath Temple Attack, Video Of A “Confession”

Glyn Johns is a Fashion Favorite in ‘The Beatles: Get Back’