Mayor Eric Adams said Wednesday he had no role in the firing of a New York City mom who crashed a press conference to question him over his decision to maintain the toddler mask mandate.

Daniela Jampel, a former Law Department staffer, learned Monday that she was fired from her job shortly after she furiously accused Adams of backtracking on his promise to lift the school mask mandate for children 4 years old and younger.

Sources previously told The Post the assistant corporation counsel, who represented City Hall in several high-profile cases, was fired for a since-deleted tweet describing the mask mandate for youngsters in public schools and daycare facilities as “shameful.”

During an unrelated press conference Wednesday morning, Adams said he was told of the Law Department’s call to give Jampel the boot before the unusual incident, and called her tweet “inappropriate.”

“When she spoke, it was clear that she was not a reporter. But what did I do? I said, allow her to speak. We started allowing her to speak, I’m not going to be disrespectful and not allow her to speak. She spoke. I didn’t know who she was,” he told reporters in Brooklyn in response to a question from The Post.

“Did not know who she was, did not make the call to fire her,” Adams said.

“It doesn’t bother me when people say names, call names at me. Listen, I’m an ex-cop. People have been calling me names for years. Doesn’t bother me,” he continued. “But what she tweeted, sent out, it was inappropriate, and the Law department made the decision and notified me prior to that press conference of their actions, and any questions you could find out from the Law department. I had no interaction with that at all.”

Jampel did not immediately respond to a request for comment on the mayor’s statements.

Adams — who in early March removed the mask requirement for students old enough to be eligible for a COVID-19 vaccine — announced last month that children 4 years old and younger will soon have the option to ditch their masks in public schools and daycare facilities barring an increase in virus cases. 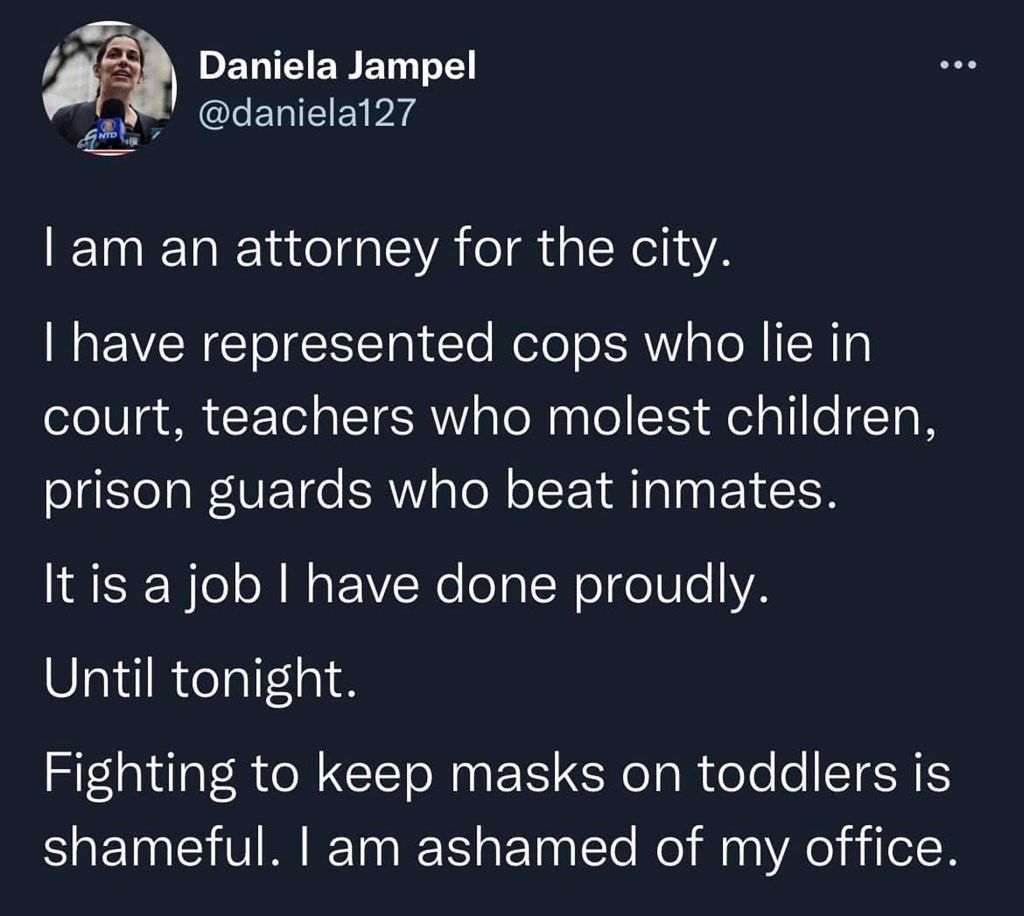 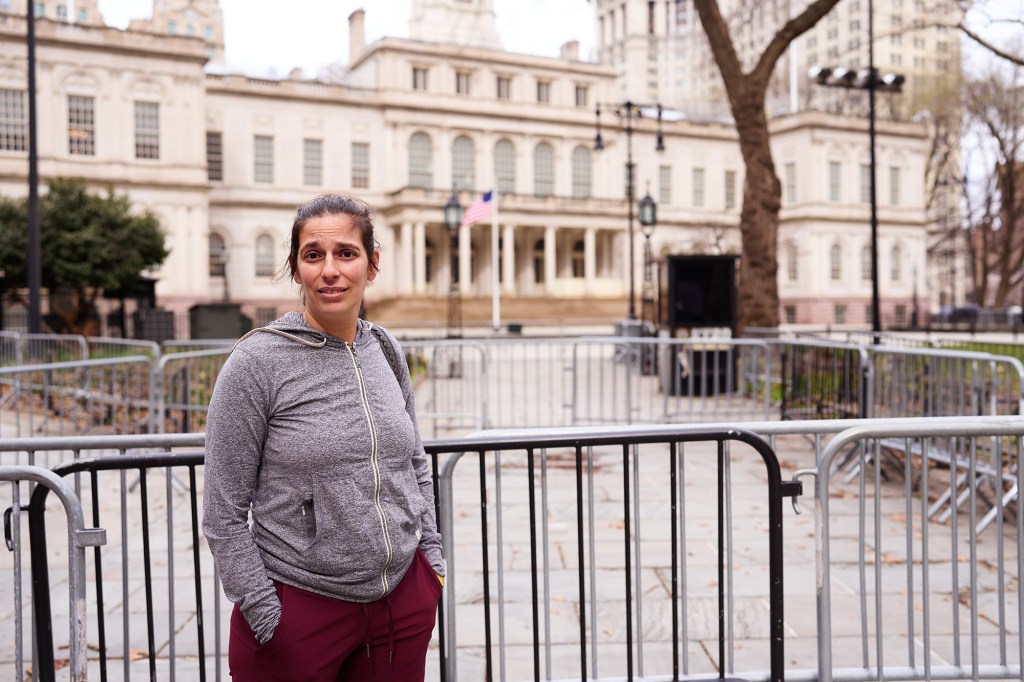 Last week, a Staten Island judge lifted mask mandates for toddlers citywide, as Adams vowed shortly after to keep the rule in place due to an uptick in COVID-19 cases driven by the BA.2 Omicron variant and announced City Hall is appealing the judgement.

“I think it’s imperative that due to the rise in cases that we’re seeing, as slight as they are; our plans were to take a week to assess the numbers before removing masks to 2 to 4-year-olds,” the mayor explained Friday.

On Monday, Jampel attended an unrelated press conference at City Hall, where she confronted the mayor.

“Three weeks ago, you told parents to trust you that you would unmask our toddlers,” Jampel fumed. “You stood right here, and you said that the masks would come off April 4. That has not happened. 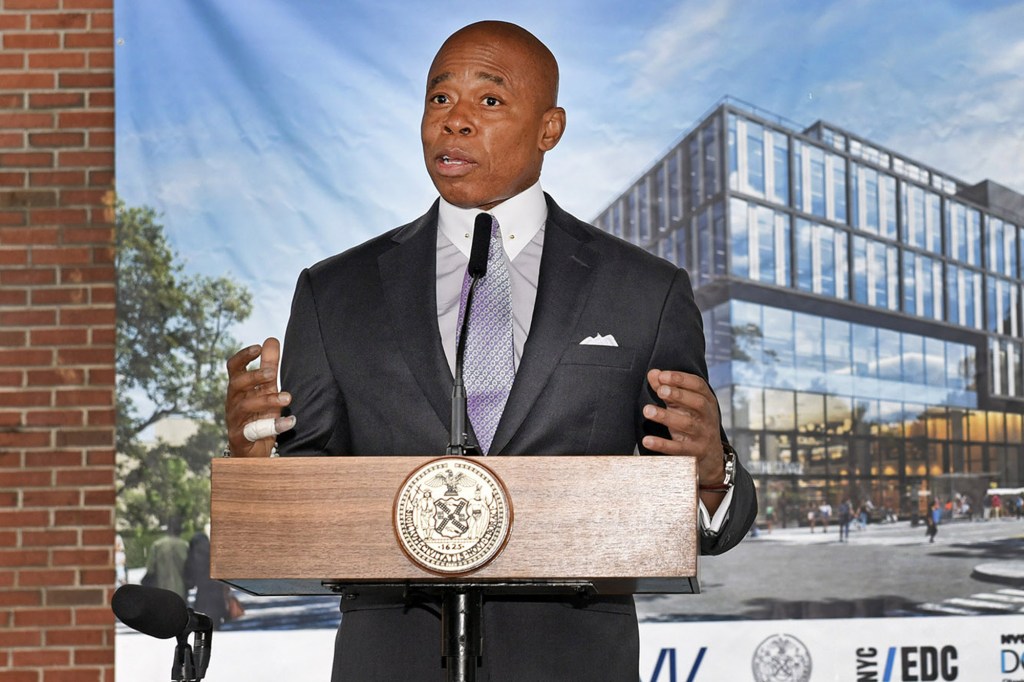 “Not only did you renege on your promise, you had your lawyers race to court on Friday night arguing that there would be irreparable harm if children under 5 are allowed to take off their masks today along with their older siblings in school,” the mom said as mayoral staffer attempted to put a halt to the non-reporter’s rant.

Adams responded by noting there’s recently been an uptick in new COVID-19 cases in the five boroughs.

“I made the announcement that we were looking to announce today, which is Monday, to take the masks off children 2 and 4 years old. But I also stated, if we see an uptick, we will come back and make the announcement of what we’re going to do,” Adams said. 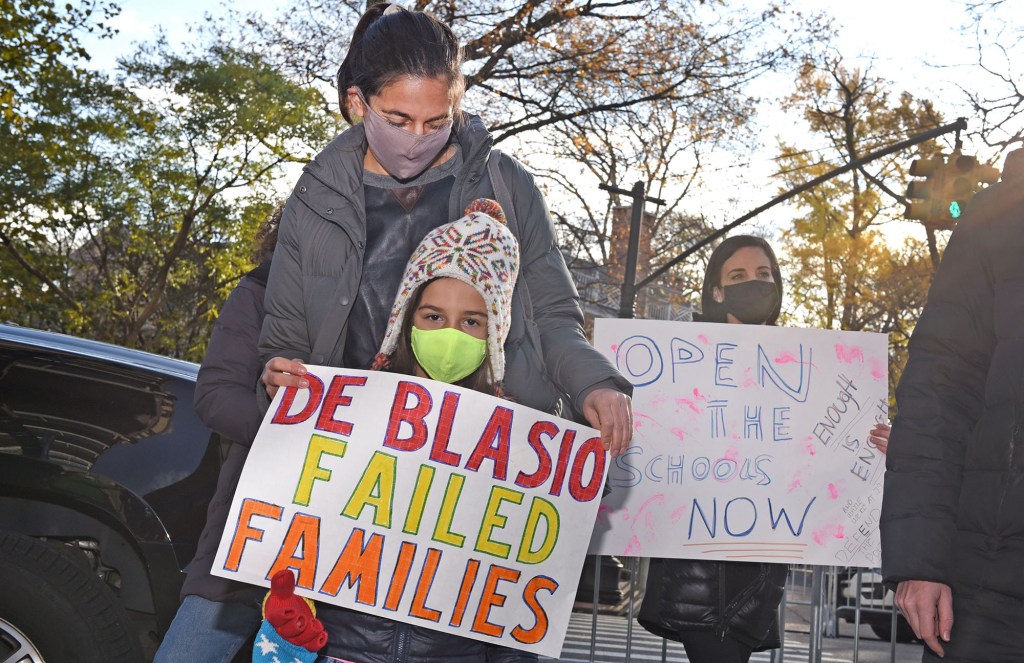 Daniela Jampel is a mother of three and co-founder of the advocacy group Keep NYC Schools Open.Gregory P. Mango

“We’re going to pivot and shift as COVID is pivoting and shifting. There is a new variant. The numbers are increasing. We’re going to move at the right pace, and that’s the role I must do.”

Jampel then blasted Adams for “punishing toddlers because he does not have the political will to put masks on everybody.

“The New York City Department of Health has published a chart that says children 0 to 4 have the lowest case rates in the entire city. [Cases] have gone up, but [the youngest ages] are at the bottom of the list,” she told The Post. “We should not be requiring masks on only the youngest members of our society and on the people with the lowest case rates.”

Later Monday, The Post reported that Jampel — a 38-year-old mother of three and vocal critic of the toddler mask mandate — was informed via email shortly after the press conference that she was fired. A Law Department’s rep confirmed that Jampel was terminated, but told The Post the decision to can her was made before Monday.

Jampel, the co-founder of an advocacy group Keep NYC Schools Open, previously told The Post in a statement, “I am retaining counsel and will not litigate in the press.”

City sources previously told The Post the decision to fire Jampel came Friday after she wrote a tweet criticizing Adams for upholding the toddler mask mandate and said her job with the city entailed defending “cops who lie in court, teachers who molest children, prison guards who beat inmates.” 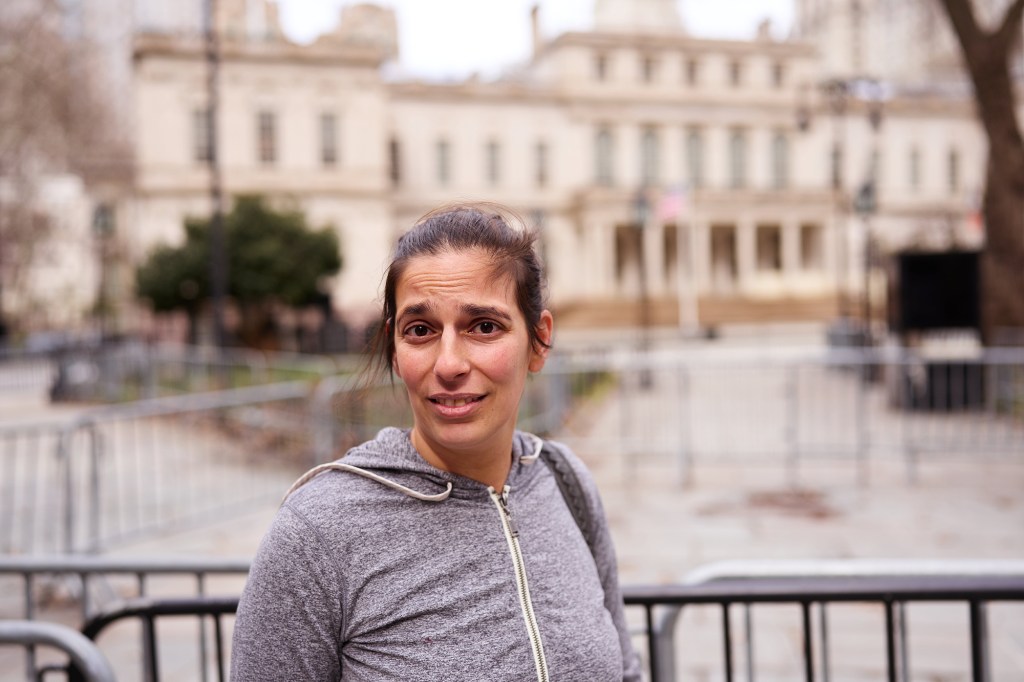 Daniela Jampel has been involved in 29 civil cases against the city since she started working in the Law Department. James Keivom

“It is a job I have done proudly. Until tonight. Fighting to keep masks on toddlers is shameful,” wrote in a since-deleted tweet. “I am ashamed of my office.”

State court records indicate Jampel was involved in at least 29 civil lawsuits brought against the city since she started working for the Law Department in 2016. Some of those cases, which are still pending, are similar to the suits she mentioned in her tweet.