Apple Studio Display FAQ: Everything you need to know

In 2019, Apple re-entered the display market after a three-year absence with the Pro Display XDR, an expensive high-end monitor to accompany the Mac Pro. It took Apple another three years to offer the Studio Display, a lower-priced (but still expensive) monitor for the rest of us.

Since the display is a vital part of your computer setup, knowing what you’re getting when you buy one is important. In this guide, we’ll go over the important facts you need to know about each Apple display to help you make the right choice.

March 24: iFixit performed a teardown of the Studio Display and found that its internals look a lot like those of the iMac. Its camera module is similar to the front camera on the iPhone 11.

March 10: Rumors say Apple is working on a 27-inch mini-LED display that could launch in June.

The Studio Display is one of the few 27-inch 5K displays on the market. Apple used to sell the LG 27-inch UltraFine 27MD5KL-B, but it seems to have been discontinued (you may still find it on Amazon and other retailers). Other 5K displays are often larger than 27 inches.

The standard glass that comes with the display is similar to the glass used on the 27-inch iMac. It does a good job of cutting down glare, but if you want as little glare as possible, Apple offers a nano-texture option, which was also available on the 27-inch iMac, for $300.

Apple offers three different stand options. The tilt-adjustable stand is the default with the $1,599 model. A model with a VESA mount is also $1,599. The tilt- and height-adjustable stand is a $400 option. If you decide after purchase that you want to change the stand, you must bring the Studio Display into an Apple Store or Apple-authorized service center to have the new stand installed. Apple hasn’t said how much that will cost.

The Studio Display can be used in landscape or portrait mode, but the stands do not pivot. (Though you can position the display in portrait mode with the stand still attached, and macOS will automatically adjust to accommodate the position.) If you think you want to be able to switch between landscape and portrait, consider getting the Studio Display with a VESA mount and then attaching a third-party pivot stand. 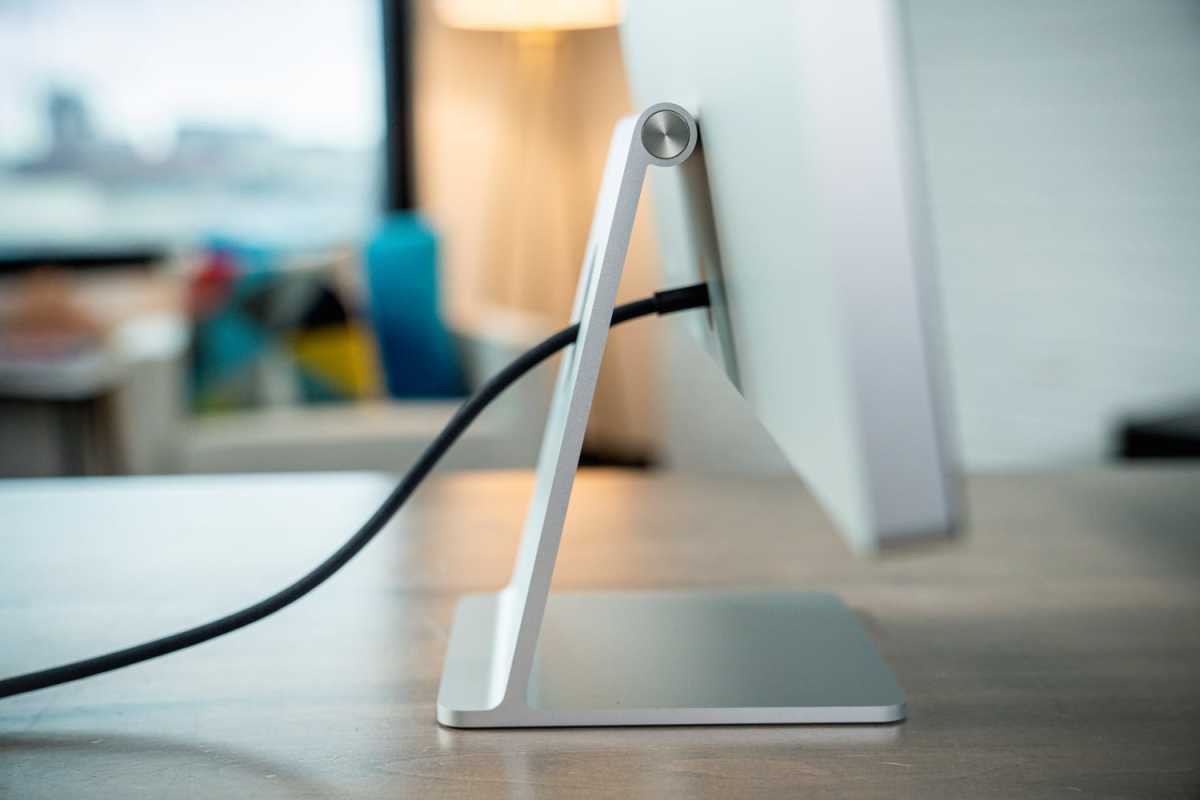 The Studio Display includes four ports: a Thunderbolt 3 port that is used to connect to your Mac, and three USB-C ports for attaching peripheral devices. The Thunderbolt port has support for 96W of power, so it will charge your MacBook while connected. Apple supplies a 1m (about three feet) Thunderbolt cable and sells a 3m (about 10 feet) one for $159.

The power cable is fixed o the back of the machine and not meant to be removed. However, various people have been able to remove it by giving it an extremely hard pull. If you need to replace the power cable, you must bring the display to an Apple Store or authorized service center, where they will have a special tool to remove it.

The Studio Display has a built-in 12MP camera that can be used with FaceTime, Zoom, and other apps. It has a 122-degree field of view, and it supports Center Stage, the ability to adjust the frame so that you’re always in the center.

Some initial reviews of the Studio Display complained about the camera’s image quality, stating that it’s not up to par with other front-facing cameras, such as the one the iPhone and iPad. Apple stated that a software update to adjust the image quality would be released to address the issue. 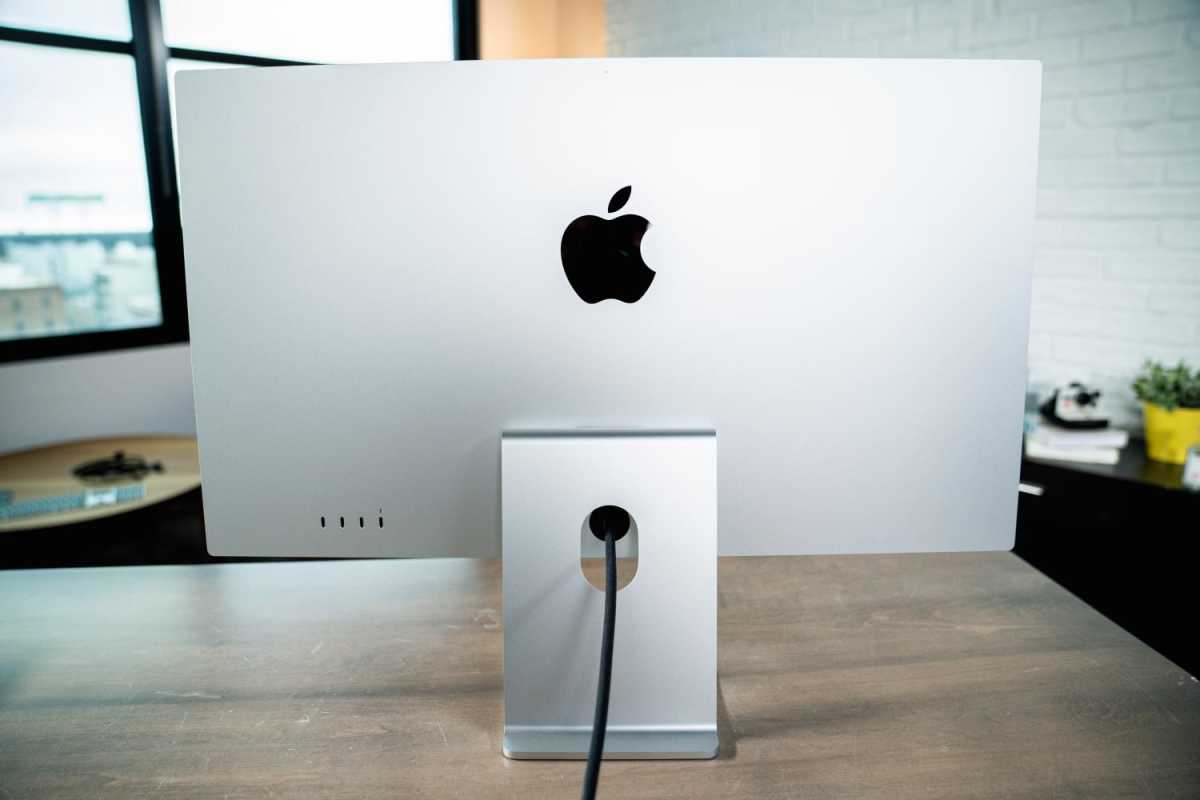 The back of the Studio Display.

The Studio Display has a few unique characteristics, the most intriguing one being that it has an A13 Bionic processor, the same one used in the ninth-generation iPad and iPhone 11. It also has a 64GB SSD (though only uses 2GB), and runs iOS 15.4. And since it runs iOS, it will get software updates, though we don’t know how often they will arrive.

These components allow the display to support Center Stage, Spatial Audio, and Siri, which means that if you have an older Mac that is incompatible with the “Hey Siri” cue, it will work with this display attached.

The uses of these items may lead one to believe that Apple could have more in store for the Studio Display, but this is likely a case of Apple simply using parts that are readily available and repurposing them to save money.

The Studio Display works well for general use and production environments alike. But even at its starting price, $1,599 might be too much for the average Mac user. You can find cheaper displays with comparable image quality that won’t have Center Stage or Spatial Audio.

If you need a production display but don’t have the money for a Pro Display XDR, however, the Studio Display fits the bill. If you are a general user who makes the occasional videos in iMovie, and does some light photo editing or other creative work, you’ll also enjoy the Studio Display, but you can save a few dollars by going with a non-Apple monitor. And of course, if you have to have Apple’s latest products, there’s no substitute.

The Pro Display XDR is the company’s top-of-the-line display, starting at $4,999 without a stand. It has numerous features not found in the Studio Display, and it’s meant for professional production workstations. Here are the vitals for the Pro Display XDR. 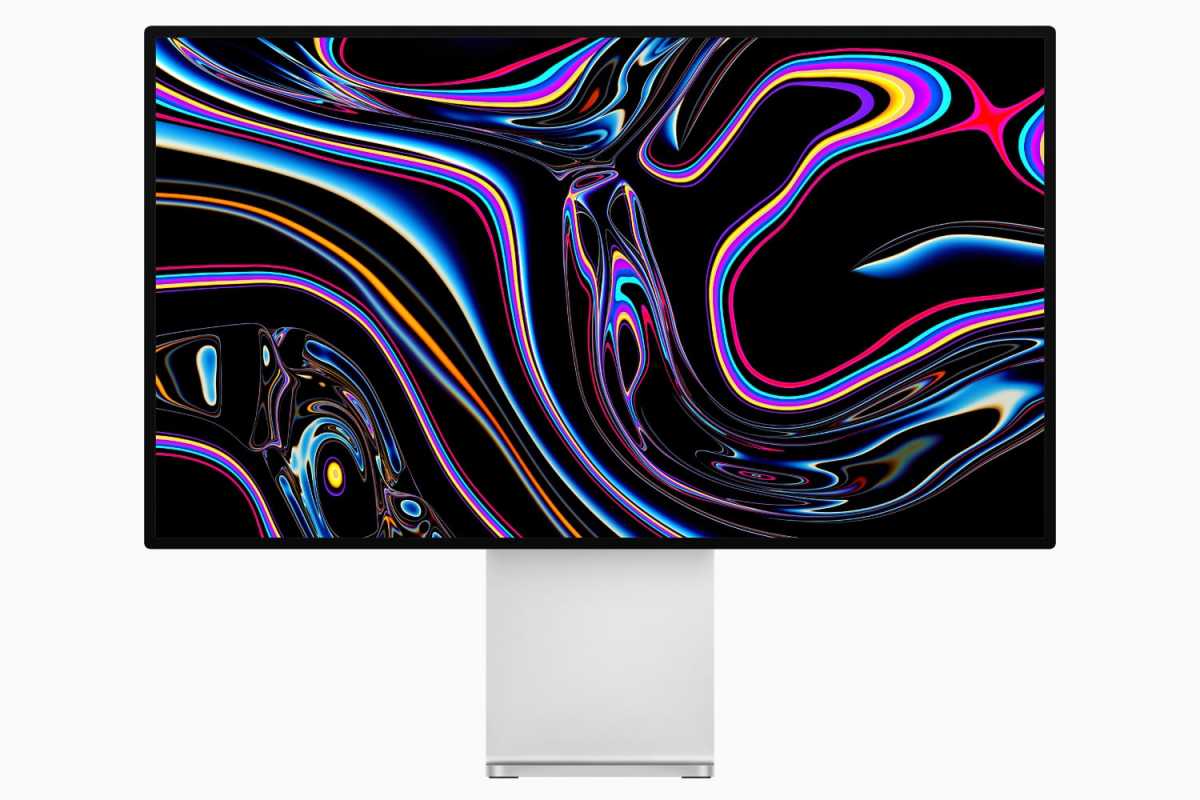 The Pro Display XDR was built in 2019 to meet the image quality demands of content creators. Its image quality is top notch, and there are very few displays that have the brightness that this display has. However, since it’s three years old, this panel is starting to show its age. 8K displays are now available, and with higher refresh rates that produce smoother animations.

The standard glass that comes with the display does a good job of cutting down glare, but if you want as little glare as possible, Apple offers a nano-texture Pro Display XDR for $5,999, an additional $1,000 over the standard glass.

The Pro Display XDR uses a magnetic mount to attach the stand or VESA adapter. It locks into place strongly so the display won’t fall off.

Apple does not include a stand or VESA mount with the display. The Pro Stand is an additional $999, and it height, tilt, and pivot adjustments. The VESA adapter is $199 and is compatible with 100×100 VESA stands, wall mounts, and articulating arms.

The Pro Display XDR can be used in either landscape or portrait modes, and Apple’s Pro Stand pivots so you can switch between the two. MacOS automatically adjusts its interface based on the mode.

The Pro Display XDR includes four ports: a Thunderbolt 3 port that is used to connect to the Mac, and three USB-C ports for connection peripherals. The Thunderbolt port has support for 96W of power, so it will charge a connected MacBook’s battery. The power cable is removable.

The Pro Display XDR does not have a camera. If you need a camera for video conferencing and other functions, you will need to buy one separately. Logitech and Creative are popular webcam makers with decent cameras under $100, to you can get a high-end option, such as the 4K Opal C1 ($300).

The Pro Display XDR also does not have speakers or microphones. If you get a webcam, that could take care of the microphone, unless you want a studio-level device. And there are hundreds of companies offering external computer speakers, so it shouldn’t be difficult to find a quality set. 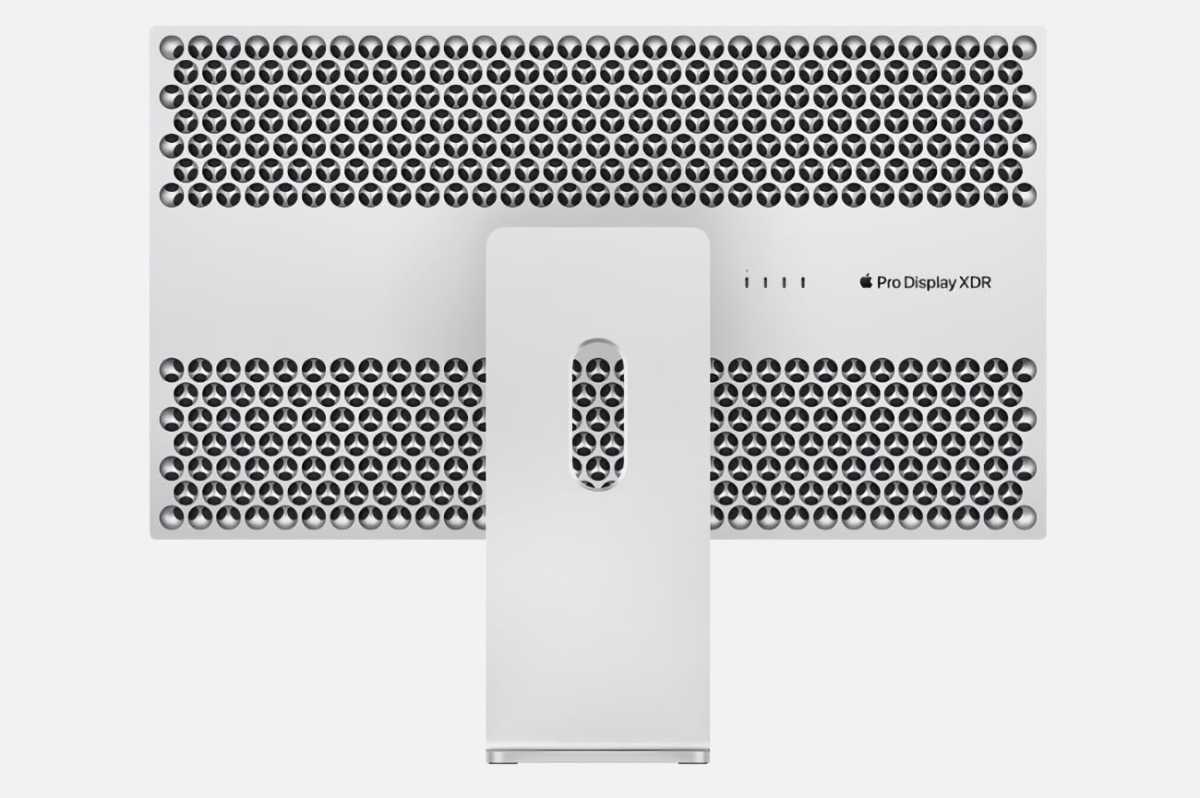 Back of the Pro Display XDR.

The Pro Display XDR is for creative professionals whose livelihood depends on high-quality content. It has a set of imaging features to satisfy the most demanding users, and its image quality is hard to beat.

However, it is a three-year old display, and it is starting to show its age. 8K displays with high refresh rates are available, and that might be more appealing than the Pro Display XDR’s 6K/60Hz capability.

Apple released the Studio Display in March 2022, so we could see a new Pro Display XDR in the near future. The payoff may be worth it if you can wait.

Republican Congressman Echoes Biden On Regime Change: Putin ‘Should Be Out Of Power’

What exactly is it?- Technology News, Firstpost