Best actor winner Will Smith was seen being consoled by Denzel Washington and Tyler Perry after he smacked presenter Chris Rock in the face with an open hand during the Oscars live broadcast on Sunday night.

Smith could be seen shouting a vulgarity at the comedian for making a joke about his wife’s appearance who were both sitting in the front row at the Dolby Theatre in Hollywood.

Rock made a joke about the hairstyle of Smith’s wife Jada Pinkett Smith that referenced the movie ‘G.I. Jane’ in which actress Demi Moore shaved her head.

Smith, who is nominated for best actor for ‘King Richard,’ walked on stage and slapped Rock in what at first appeared to be a scripted joke, but the mood turned to shock moments later when Smith, back in his seat, shouted back, ‘Keep my wife’s name out of your f***ing mouth.’ 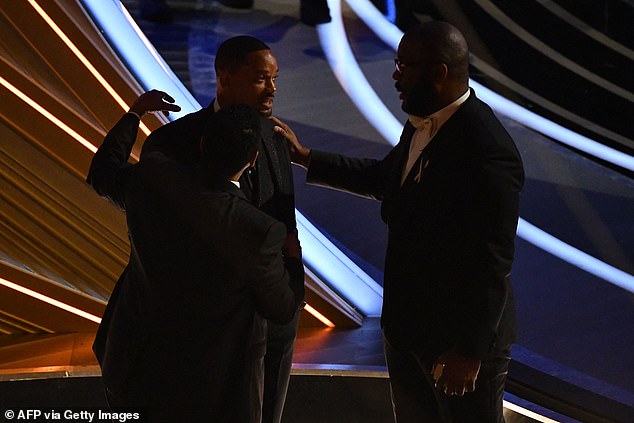 Denzel Washington, left, Will Smith, center,  and Tyler Perry, console an emotionally unstable Will Smith during the Oscars 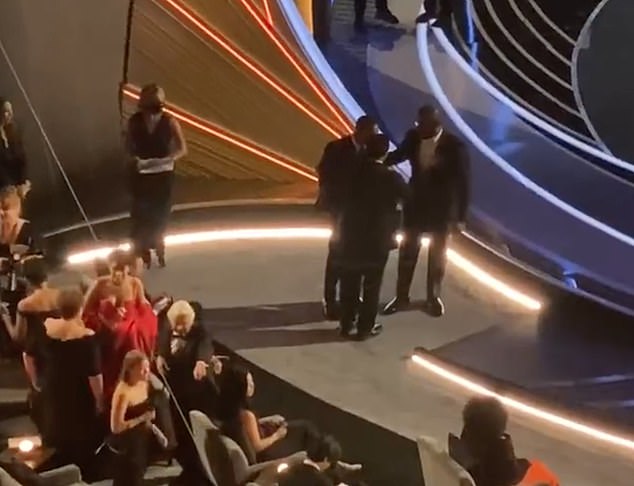 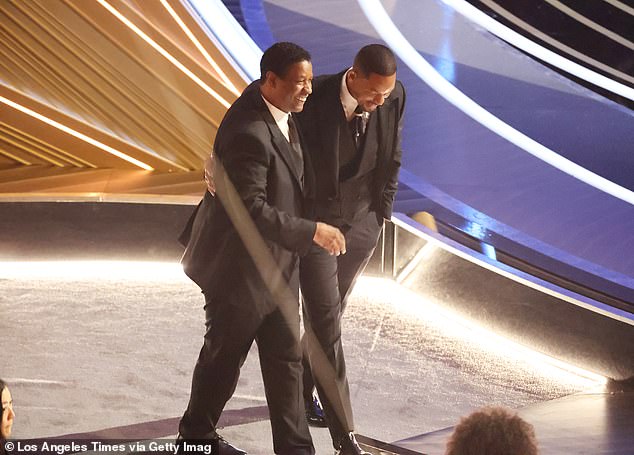 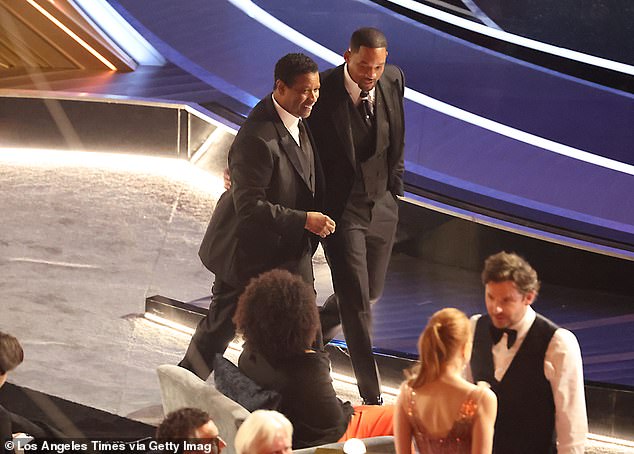 During the commercial break, Will Smith is pulled aside and comforted by Denzel Washington and Tyler Perry, who motion for him to brush it off. Will appears to wipe tears from his eyes as he sits back down with Jada, with Denzel comforting Jada and Will’s rep by his side. pic.twitter.com/uDGVnWrSS2

After Rock joked to Smith that he was looking forward to a sequel to ‘G.I. Jane,’ Smith stood up from his seat near the stage, strode up to Rock and slapped him.

The moment shocked the Dolby Theatre audience and viewers at home.

Before that, the show had been running fairly smoothly.

Laster during a commercial break, Smith was seen being further consoled by Bradley Cooper who place his hands on Smith’s shoulders as he attempted to comfort him.

Just minutes after striking Rock with an open hand live on stage, Smith won his first Academy Award for his portrayal of Richard Williams, the determined father who raised tennis champions Venus and Serena Williams, in ‘King Richard.’ 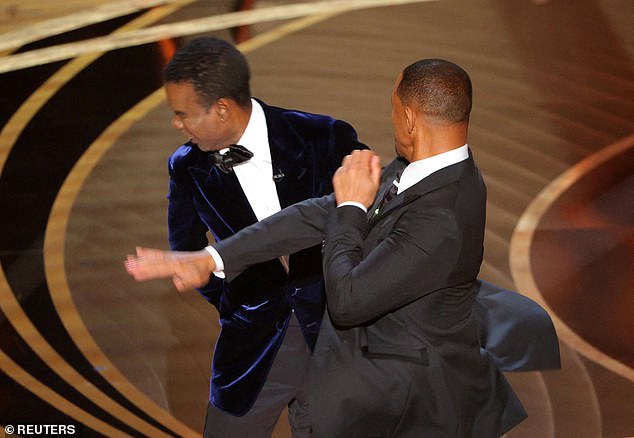 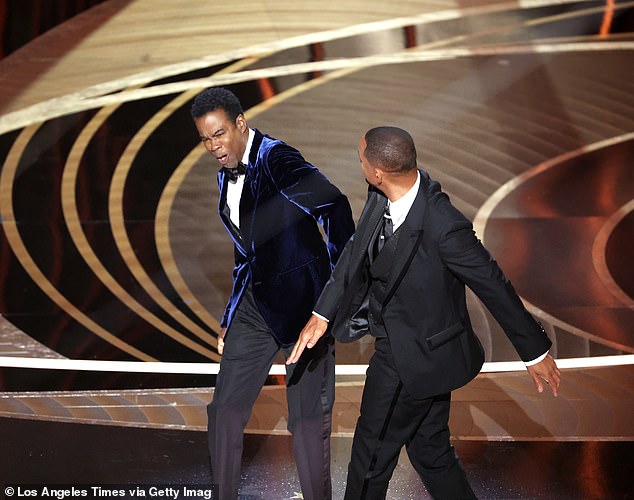 ‘Richard Williams was a fierce defender of his family,’ said a visibly emotional Smith. ‘In this time in my life, in this moment I am overwhelmed by what God is calling on me to do.’

The slapping incident occurred after Rock cracked jokes about the haircut of Smith’s wife Jada Pinkett Smith. The shocking scene, broadcast live around the world, stunned both the live audience at the Dolby Theatre and TV viewers.

After Smith strode out on stage and slapped Rock with an open right hand, Rock staggered and exclaimed ‘wow, Will Smith just smacked the s**t out of me.’

Vanity Fair executive editor Ramin Setoodeh, who was tweeting live from the ceremony, said that someone who works for the Oscars told him that Rock was not interrupted by Smith at rehearsals yesterday.

‘It was not supposed to happen. It was real,’ he wrote.

Setoodeh, watching from inside the theater, said that Smith’s publicist approached him and spoke to him during a commercial break. 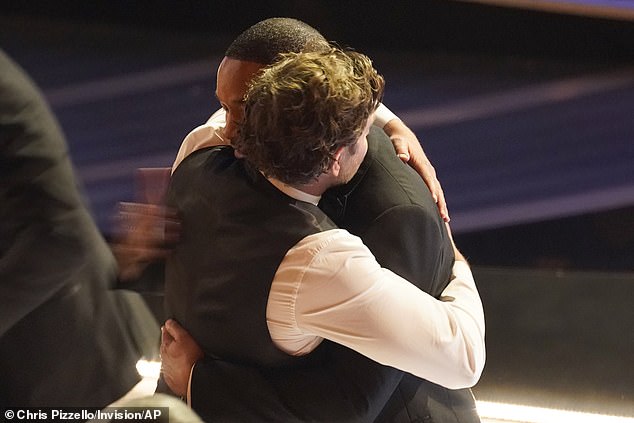 Bradley Cooper, left, and Will Smith appear hug one another at the Oscars on Sunday after Smith had slapped Rock 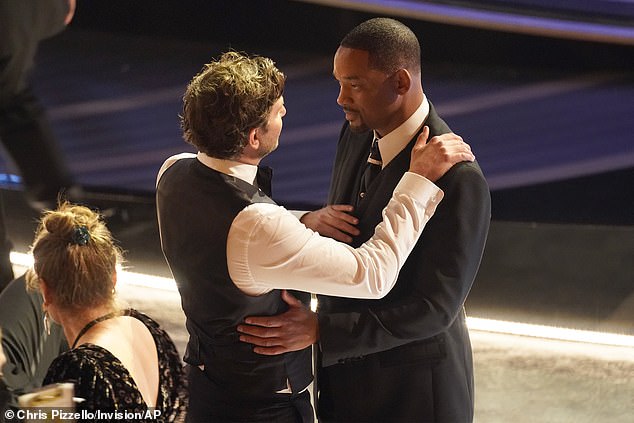 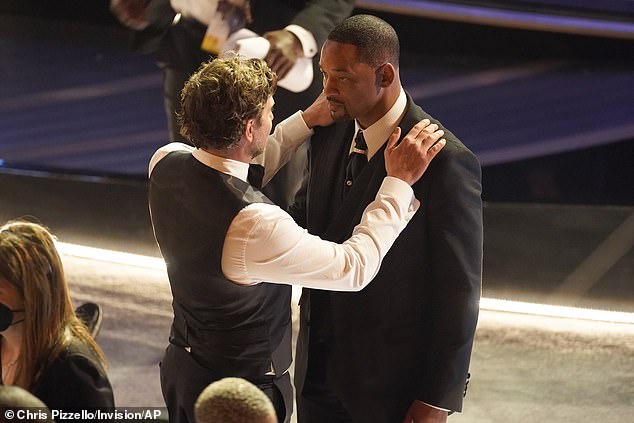 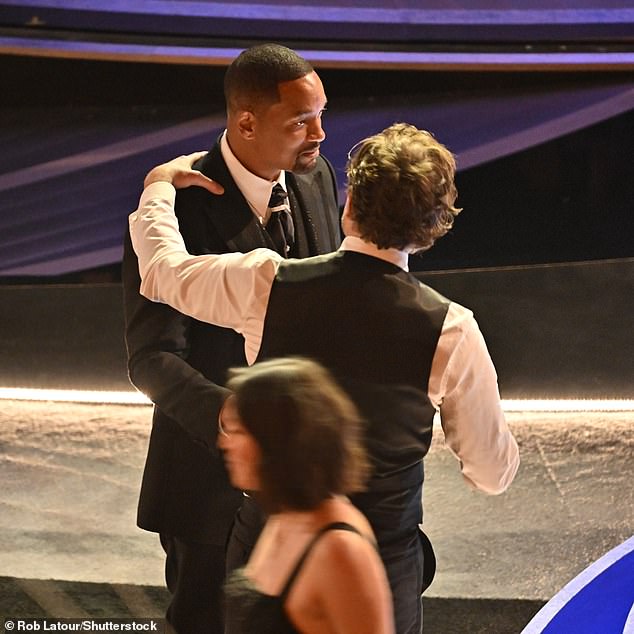 Frog Eye Tongue Piercing – What is it? How to Get it done?