An uninspiring England toiled as Nkrumah Bonner’s determined century put West Indies on top after day three of the first Test in Antigua.

Ben Stokes had Jason Holder caught behind for 45 early on and Jack Leach trapped Joshua da Silva lbw for 32.

But the tourists were held up for almost 30 overs by a stand between Bonner and number nine Kemar Roach, who made 15 from 89 balls.

Roach was run out in the final session, only for number 10 Veerasammy Permaul to frustrate England further with a 87-ball 26.

Bonner, who could have been caught on 73, batted patiently throughout. He finally fell in the third to last over of the day when the third umpire judged he had tickled a catch down the leg side off part-time off-spinner Dan Lawrence.

That wicket gave England some cause for celebration but the hosts still sit in a strong position with two days to go.

England struggle in the sun

Any criticism of England’s bowlers must come with the caveat that this pitch at the Sir Vivian Richards Stadium is slow and has offered minimal support to pace or spin bowlers.

But, with the dropped Stuart Broad and James Anderson again notable by their absence, England’s attack lacked threat once more in an innings that has now lasted 157 overs.

Stokes bowled admirably, giving England with the wicket of Holder with only four runs added to the overnight score.

But the new ball, taken soon after the start with West Indies five down and still 84 runs behind, came and went with little effect. Craig Overton often bowled below 80mph and Chris Woakes showed little sign of overturning his poor overseas record. 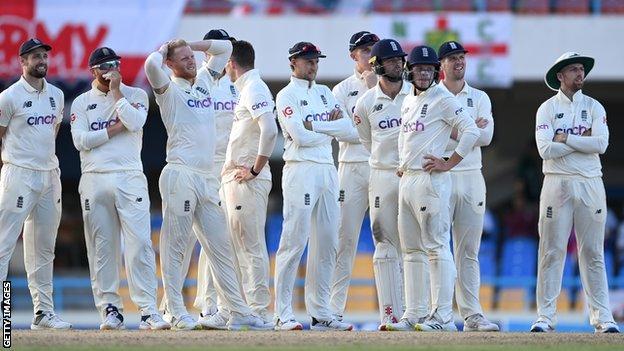 England have only won one of their past 14 Tests

The loss of Wood hurt England badly. He left the field with an elbow issue after one over with the new ball, having only bowled four previously, and is now a doubt to take further part in the Test.

Without their quickest bowler, England struggled to remove West Indies batters who rarely showed aggression. It took a misjudged run and a good throw by substitute fielder Ollie Pope to eventually see off Roach, ending his stand with Bonner.

Left-arm spinner Jack Leach was the most likely wicket-taker, even with little turn to aid him.

Bonner inside edged the Somerset bowler onto his pad when flicking to leg but Crawley could not take the ball when it deflected to him at slip. After passing 100, Bonner twice survived tight lbw decisions on review – Leach the bowler on both occasions.

Bonner may have fallen near the end of the day but has still hurt England’s hopes in the Test significantly. There could be further repercussions given the loss of Wood and the number of overs now in the bowlers’ legs.

This hundred is right-hander Bonner’s second in 10 Tests, both of which have come on this ground.

He resumed on 34 and, while favouring the leg side, quietly accumulated in composed fashion.

Just 51 runs were scored in 30 overs in the afternoon session, the surface doing little to help run-scoring. That may have been a factor in West Indies’ decision not to up the rate, declare and bowl at England late on.

Bonner, 33, looked to be easing to the close in steady fashion when he was dismissed, somewhat controversially.

The technology showed the tiniest spike when England called for a review after appealing for a leg-side catch.

It did not look definitive but TV umpire Leslie Reifer deemed it enough to overturn the original decision.

‘We are still in the game’ – reaction

England interim coach Paul Collingwood, speaking to BT Sport: “The way the players stuck at the task, their attitude in the field on a placid, docile pitch was exceptional. We have to be pretty pleased. Sometimes people expect you to bowl them out quickly but it was a pretty unresponsive pitch.

“We built pressure fantastically well, we bowled reverse swing well, but without pace its difficult. We are still in the game.”

West Indies batter Nkrumah Bonner, speaking to BT Sport: “It means a lot for me. Looking back at my stats before this series I had not scored major runs in the Caribbean, so am very happy I stepped forward.

“It’s a good venue, a good pitch to bat on. Tomorrow we want to bat an hour, get a lead of 100 to put pressure on the English batters.”

BBC cricket correspondent Jonathan Agnew: “It was very much West Indies’ day. It hasn’t been a pretty watch, but they’ve done what they had to do in these very difficult scoring conditions. It is easy to defend as a batter, but difficult to score at any pace unless you bowl poorly.”

The World Has a Russian Oil Problem. Here’s the Best Way to Solve It

How a New Digital Dollar Could Shake the US Financial System

5 Best Ways to Customize Safari Start Page on Your iPhone