When the Mac mini launched in 2005 as the first BYODKM Mac (bring your own display, keyboard, and mouse), it had the potential to be one of the most popular Macs ever made. Nearly two decades later, it hasn’t really lived up to its hype, as specs, prices, and performance never quite reached the heights we expected. But rumors have been swirling that Apple is preparing a refresh to the high-end Mac mini that could blow our minds and finally deliver the tiny Mac of our dreams.

March 9, 2022: 9to5Mac reports that the new redesigned Mac mini is still on the way, and it will come in two variants: one with an M2 processor, the other with the M2 Pro.

February 6, 2022: In his PowerOn newsletter, Bloomberg’s Mark Gurman stated that “at least one new Mac” could be unveiled at the rumored March 8 event for the new iPhone SE. He doesn’t state specifically what Mac it will be, but we now know that to be the Mac Studio. Gurman also stated that “several new Macs” will be revealed at WWDC22 in June, though he doesn’t state specifically what Mac models will be released.

January 23, 2022: Leaker dylandkt tweeted that a Mac mini with an M1 Pro and M1 Max will be released this spring. (This clearly did not come to pass.)

The Mac mini has had a similar square design ever since it burst onto the scene, and that isn’t likely to change this year. However, it has gotten thinner. When it launched with a CD drive, it was two inches high, and now it’s just 1.4 inches (without an optical drive). According to reports, it could get even thinner. Jon Prosser claims that the next Mac mini will shrink even further, which could put it at less than an inch tall, based on renders.

The Mac mini will reportedly have four Thunderbolt ports.

The body could be getting a change too. While the Mac mini has had its aluminum chassis since 2010, Apple is reportedly considering a “plexiglass” top, according to Prosser. That could mean Apple will bring a little pizzazz to the Mac mini, which is limited to silver and space gray. Finally, the circular rubber pad on the bottom will reportedly be replaced with two horizontal strips as we see on the underside of the 24-inch iMac stand.

In August, Mark Gurman of Bloomberg reported that the Mac mini will have “an updated design and more ports than the current model.”

The Mac mini was among the first Macs to get the M1 processor, so it makes sense that the next model would be the first to get the follow-up. The latest rumors suggest that, with the Mac Studio sporting an M1 Max or M1 Ultra, there are no plans to make a Mac mini with a “Max” variant chip. Instead, the refreshed Mac mini will be available in M2 and M2 Pro configurations.

Specifically, the M2 CPU will likely feature the same eight CPU cores as the M1, evenly split between performance and efficiency, with a 10-core GPU (double the 5 cores in the A15). The M2 Pro will likely have 10 CPU cores (2 efficiency and 8 performance), just like the M1 Pro, and a 20-core GPU. 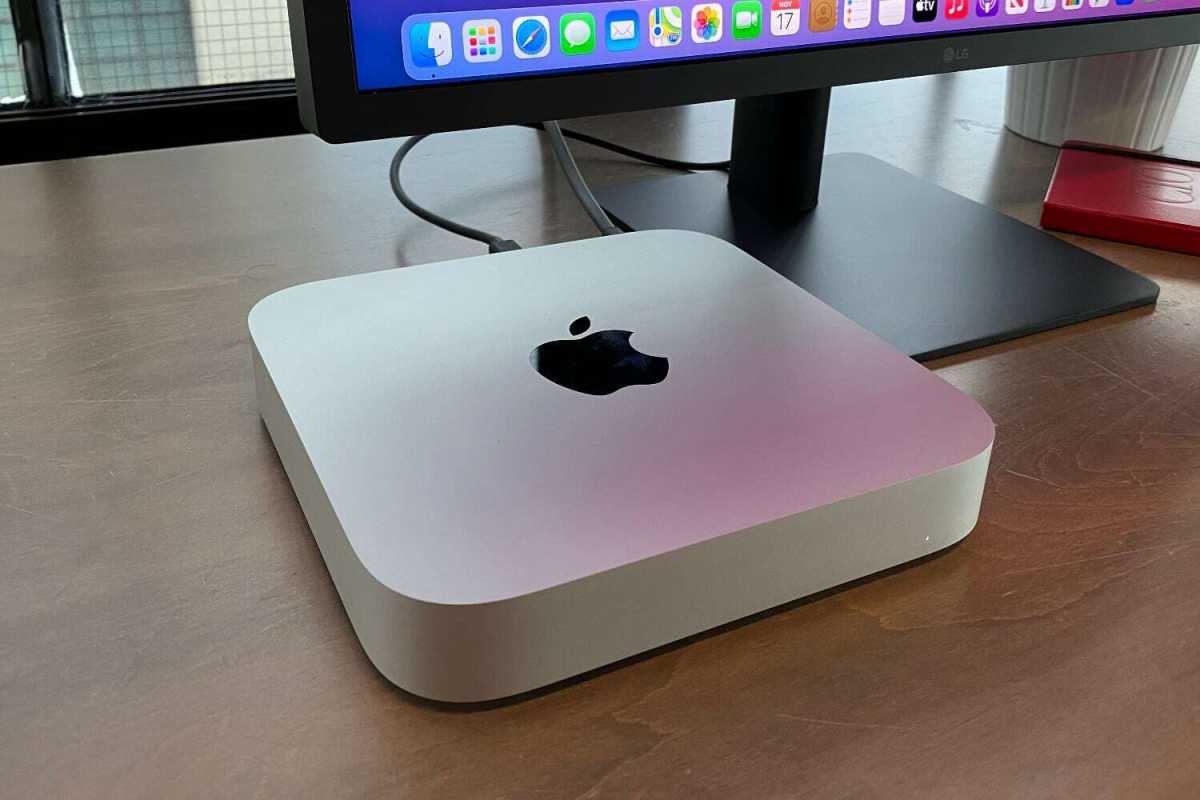 The M1 Mac mini is fast, but the next model could be way faster.

The M1 in the Mac mini has just two RAM configurations—8GB and 16GB—while the Intel version maxes out at 64GB. The M1 Pro and M1 Max MacBook Pro machines, on the other hand, start at 16GB and top out at 64GB of memory. That’s likely the same memory options we’ll see in the 2022 Mac mini models.

Storage is likely to start at 256GB for the M2 model and 512GB on the M2 Pro model, with a maximum of 4TB or so. As far as ports, the new Mac mini could get two additional Thunderbolt/USB-C ports for a total of four, along with the other ports on the current model: two USB-A ports, ethernet, and HDMI. However, Prosser says the new mini likely won’t bring back the SDXC card slot that appeared on the MacBook Pro and Mac Studio.

We originally expected the new Mac mini to arrive in the fall alongside the new MacBook Pro, but clearly, that didn’t happen. The next likely release would be around WWDC in June.