Babylon’s Fall lets you choose your character from three races, all the while inexplicably warning that any character created can’t be deleted later. There is no clear reason given as to why this is, but it may have something to do with the game’s battle pass. You can be the speedy Huysian, the stalwart Agavian, and the crafty Geleilion.

Once you have chosen your character and made them look the way you like, the real story begins. It would be a hard stretch to give Babylon’s Fall credit for the story; it doesn’t give you enough context on your character and the game doesn’t even allow for a way to look back on story events later if you want a refresher.

You play as a prisoner who has been captured alongside several other people and are put to a test of compatibility with a Gideon’s Coffin, an item that attaches to the back and allows for combat abilities far above those of a normal person. It’s one of those situations where the test ferrets the unworthy out by killing them if they prove incompatible.

Out of the several prisoners that get affixed with a Gideon’s Coffin, only your player and two others survive. Passing the test automatically makes you and those with you “Sentinels,” knights that ascend the Ziggurat and fight the main enemy. This enemy, the blue-colored Gallu, controls the higher levels of the Ziggurat and occasionally invades the lower world. Your goal is to get to the top of the Ziggurat and defeat Gallu.

Some of the story cutscenes takes place in barely animated spectacles, drawn in from canvas to remind you about the game’s oil panting aesthetic. This is also one of Babylon Fall’s biggest problems. The game doesn’t look good. This is also incredibly considering it used to look worse. I understand the idea that the graphics don’t make the game. Fun gameplay and a good story are just as important if not much more so. Except the problem is that Babylon’s Fall has none of that.

Part of what makes the story so frustrating is the assumption that you will speak to random NPCs after missions. These NPCs bear no actual purpose outside of giving context to story bits that the game refuses to give you itself. Early in the game you witness a feral change take place in another character and you don’t learn specifically what happened to them without talking to some random person that you are not guided towards nor are they in any way designated.

As far as co-op goes, you aren’t necessarily required to go out and find your own party. There is a quick match feature that you can use to join someone starting a campaign mission. It’s a good way to clear through levels, except you can’t know what level you are going to get. It would be nice if you could select a mission to maybe be sorted into a pool of people looking to do that mission, but as you get later in the game the chances of you getting to do a mission you are stuck on is incredibly low. The opposite side of this coin is that you can be joined by someone using the quick match function after you select a mission to start. This was at least nice after stretches of doing these missions alone. 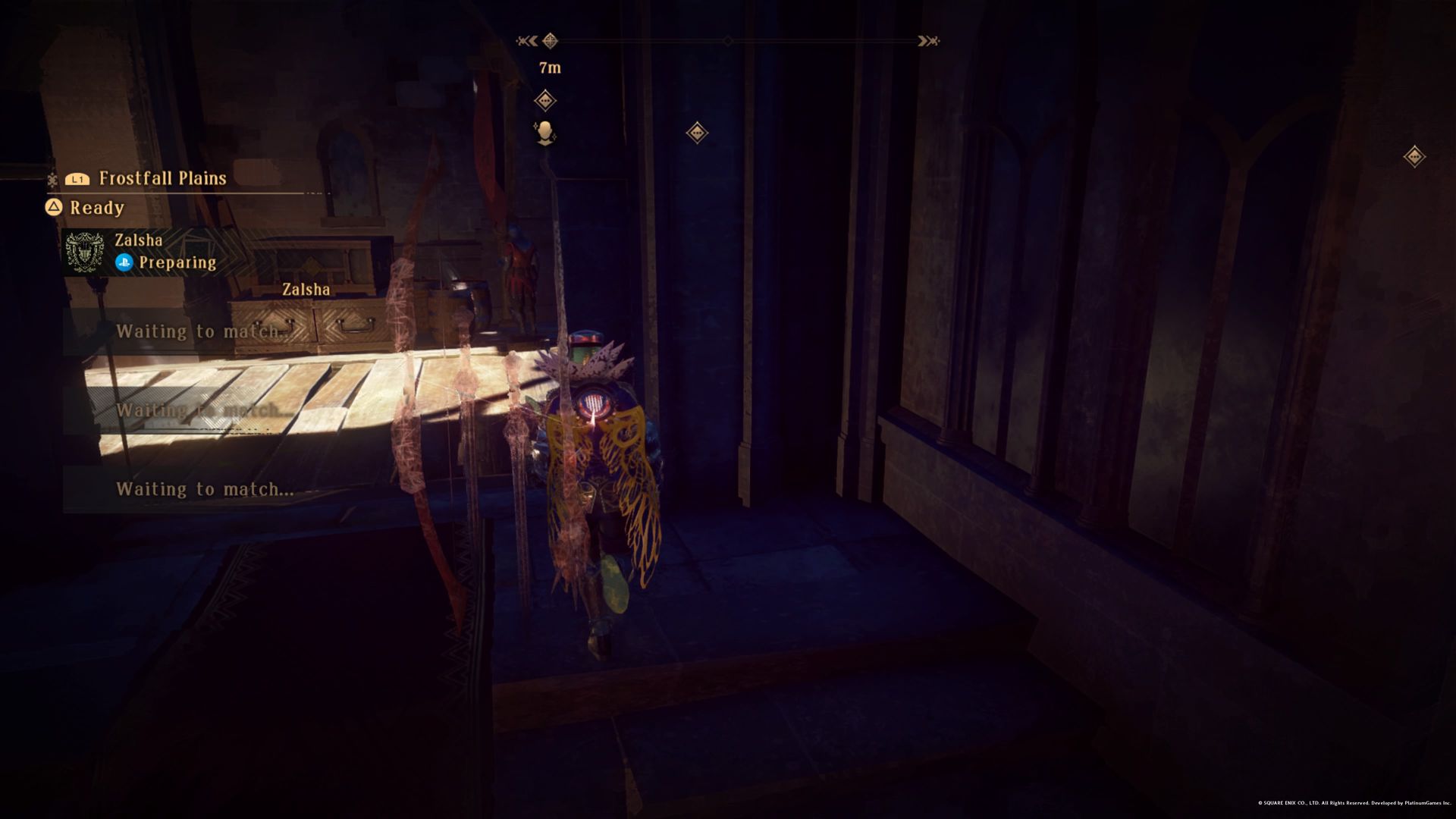 Having said that, missions themselves are horrendously bland. You find yourself going corridor to corridor along linear pathways until you happen across a wide area that will be a battle that is considered a “chapter” by the game. Each mission is comprised of roughly four fights or chapters. The saving grace is that environments change. While you start in a bland castle-like area, you move on to areas that involve underwater exploration and even an active volcano.

Though, you are still forced to move through self-contained areas no matter which part of the story you find yourself going through. For the first mission, it’s a nice change, but the novelty wears off quickly as you’re just doing the same thing for the umpteenth time. Other similar games can be repetitive too, but the gameplay needs to be fun to play over and over again at least.

Much later, the game does start to allow you do to Skirmishes which are extra mission offshoots of levels you have played for the story. You’ll recognize the surroundings to be the exact same levels as before, but that’s to be expected. While Skirmishes don’t provide much more non-story missions that might be easier to quick match into, they also serve as a place to farm equipment to help as the power level recommendations on later missions start to climb. 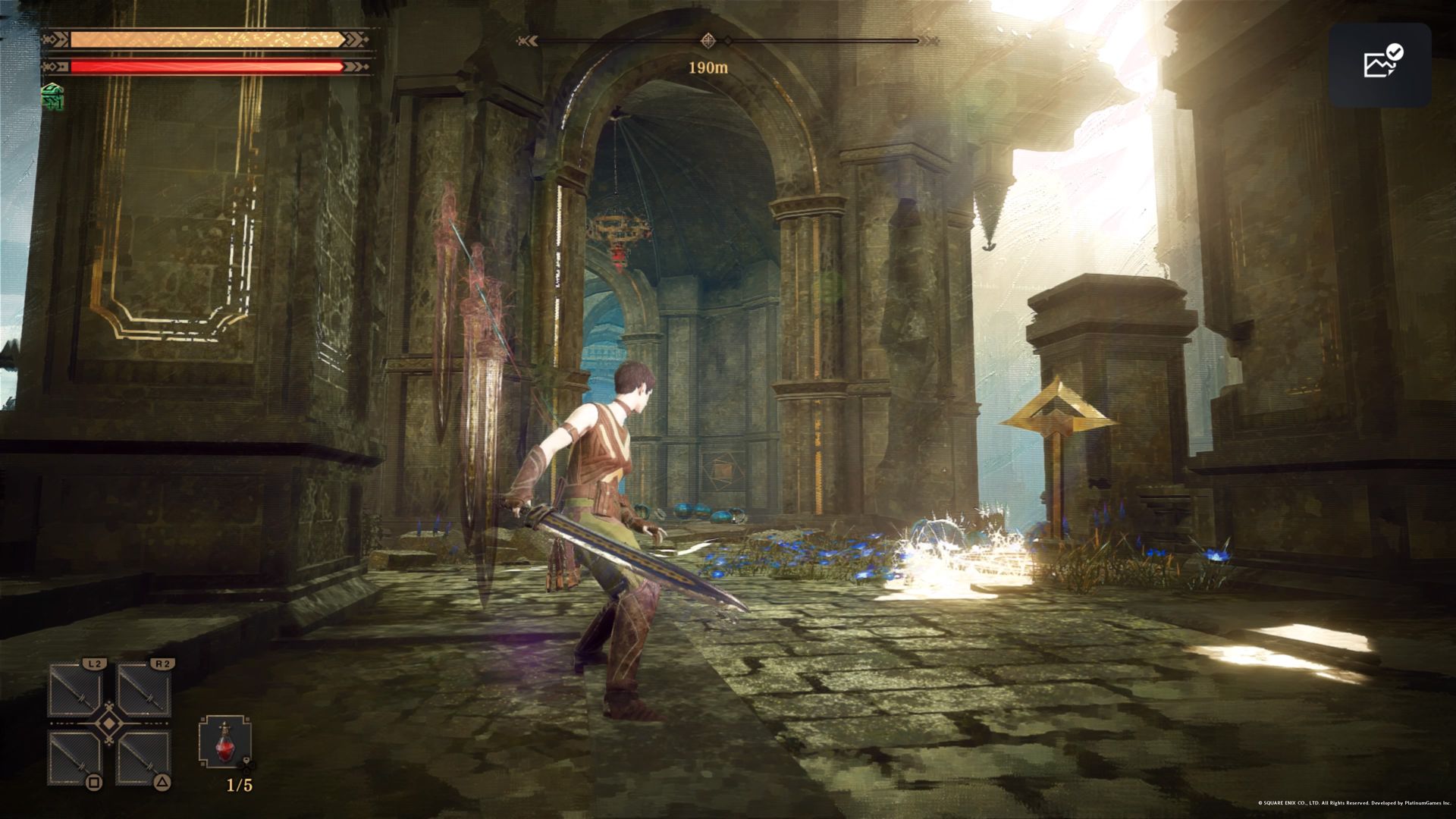 There’s almost zero exploration even available to give the levels just a little bit of variety instead of a tedious journey. If there are chests, the majority of them are right off the beaten path and take no work to find and open. The chests that do take work to introduce you to the worst part of traveling through the levels: jumping and the air dash. The jumping is so terribly floaty that it has a glide to it. As for the air dash, it is so hopelessly short that more often than not you’ll find yourself falling into exactly what you hoped to jump over.

Loot is both a blessing and a curse in Babylon’s Fall. Similar to other games like it, equipment in Babylon’s Fall works off of a power level system, similar to Light in Destiny. Armor works across four stats: Health, Stability, Spirit Regen, and Spirit.

Spirit is Babylon’s Fall version of mana, maintaining it through gear that regenerates it and weapons that siphon it off is a major key to combat. Weapons deal with Damage, Critical, Impact, Spirit Siphon, and Speed. There is a part of the equipment menu that gives you a rundown of your actual stats, but it is relegated to the bottom of the menu in extremely small font. There there is no pop-up tutorial explaining any of this so you have to figure it out on your own.

On top of power level, you have an actual character level, but it, like everything else, doesn’t matter for a while. You just gain XP as you go without any explanation or visible XP bar, until you just kind of notice later that it starts to get you something. It doesn’t seem to be tied to stats of any kind.

As far as recycling goes, you don’t learn how to craft gear until what feels like too far into the game. Considering the game’s rigid structuring around power level, there are times when better gear has to be sacrificed for worse but higher power level pieces. This would be offset entirely if the game didn’t make you wait for crafting to be an option. At least with crafting you’re still at a point in the game to use the mechanic to its fullest. It isn’t until after the final boss that you even unlock the function to upgrade gear. It is incredibly frustrating to not be given access to mechanics other games don’t make you work as hard to unlock. 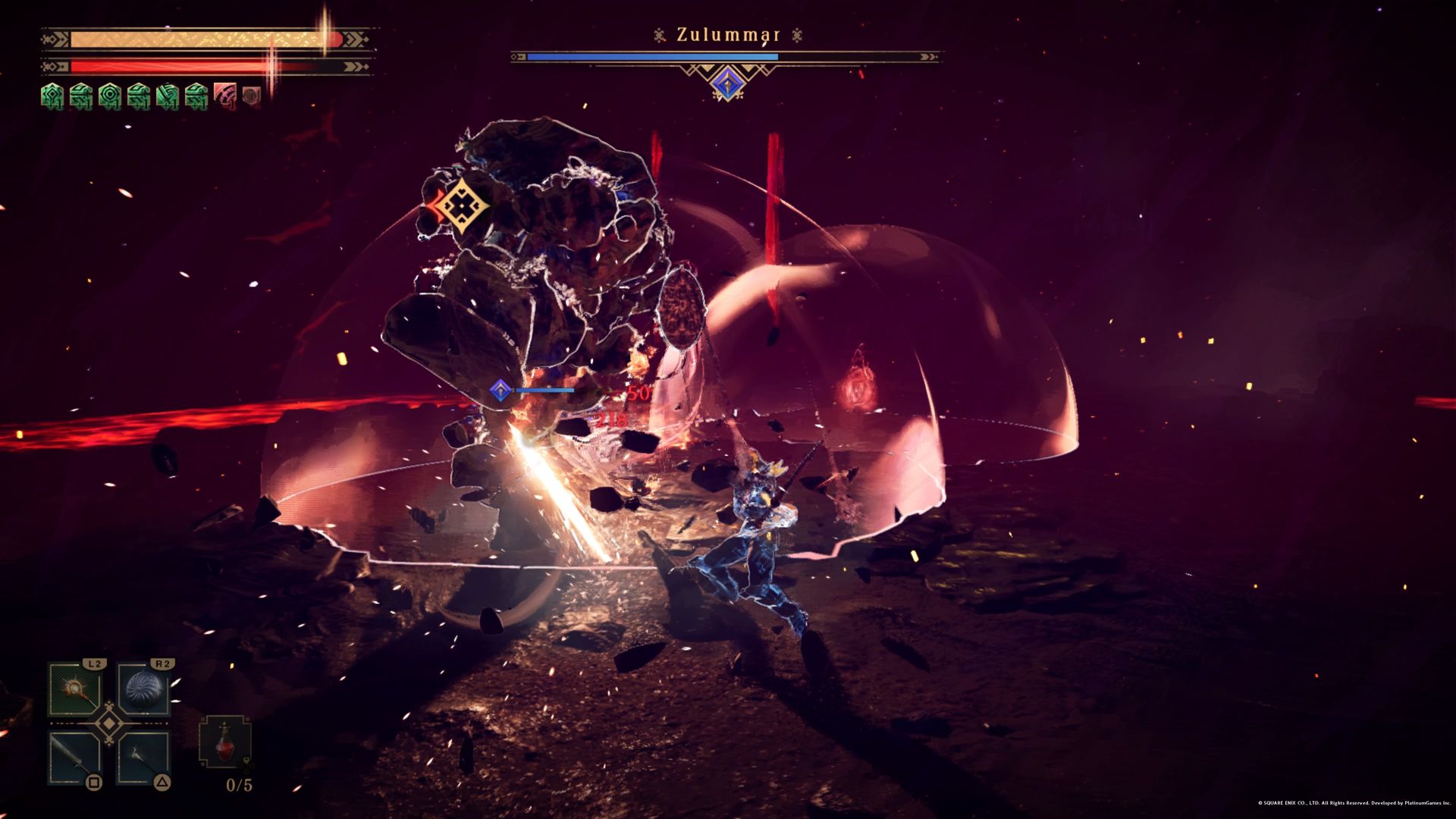 Combat is the one place where the game has some decent ideas. You are able to equip four separate weapons onto your character. Square and Triangle are main physicals attacks, whereas L2 and R2 use the equipped weapons’ “Spectral Attack.”

Spectral Attacks are stronger and somewhat more distilled versions of a weapon’s main attacks. A hammer might have one big slam, whereas a sword will just keep hitting while floating in the air provided your Spirit holds up. As these weapons aren’t physically in your hands, they are sent out and attack as if you were controlling them with telekinesis. This means you can attack with them at any point, even when knocked down, as they are independent of your body.

This gives you three concurrent attacks you can be doing at any time. In the grand scheme, this doesn’t add much to fix the game’s lack of combat flow but does make it easier to square up to an enemy and overpower them.

Combat feels just okay, but with the rest of the game, it runs out of reasons to make you care pretty early. Fighting becomes routine, and that is something you can certainly blame on mission layout. Combat turns into using only swords for Spectral Attacks as their Spirit Siphon and damage are high enough you can just keep hitting and make it through the more generic fights faster.

The true problem of Babylon’s Fall is that it has no sense of identity. There’s nothing that sets it apart from games like it, and it only shows itself as a poor comparison to other, free, games. Babylon’s Fall feels like it was made to check a box, because it is just so empty and slapped together. The cookie-cutter levels only serve to wear you down as you just want to make it through main missions that are just about your only way to play the game. At the end of the day, Babylon’s Fall is a live-service game, assuming it survives this rocky launch, there’s enough potential to maybe transform it into something much better in the future. 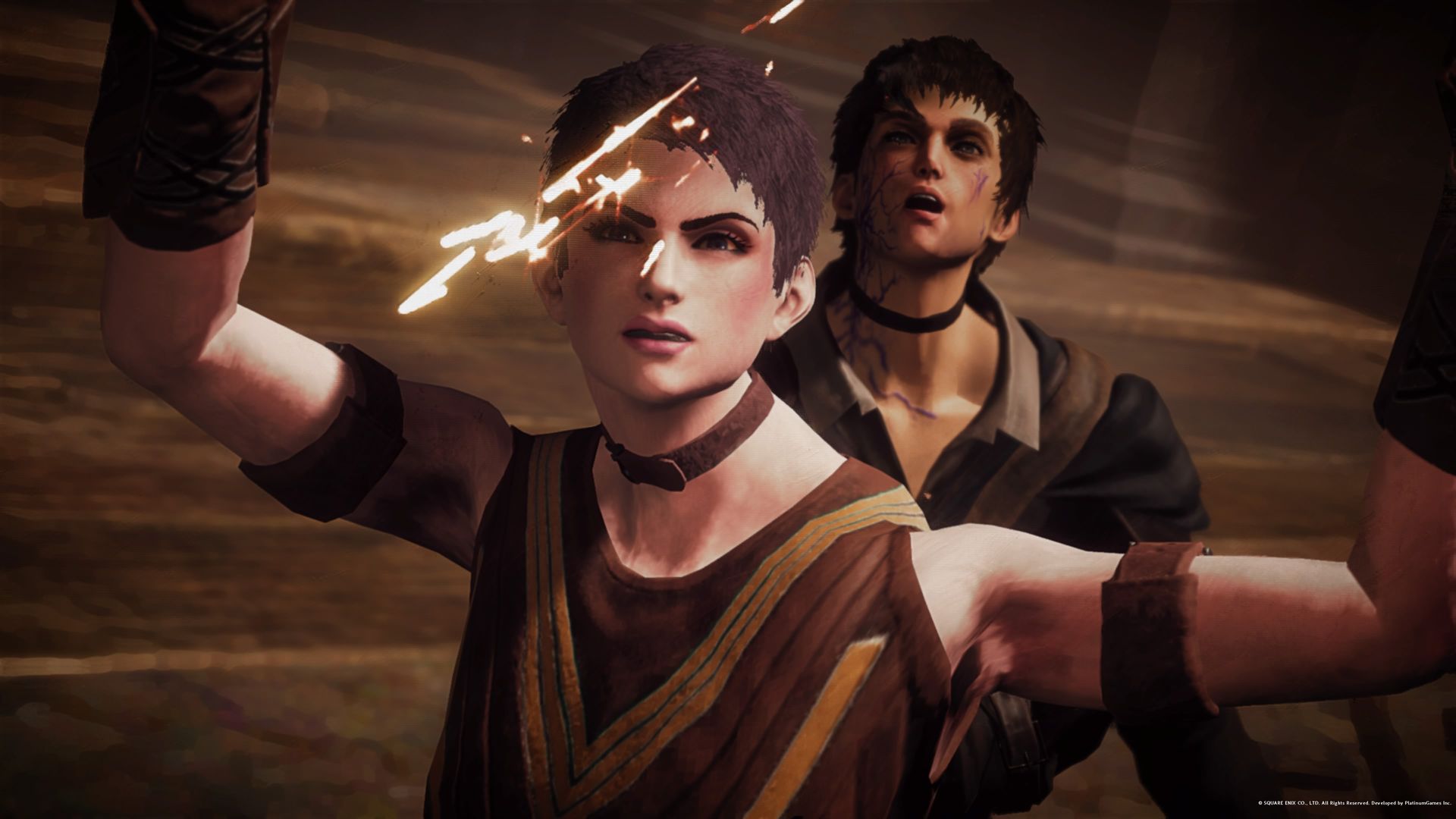 In Person: Amazon Essentials Shawl Collar Cardigan Review + How Does It Stack Up Against a $150 Banana Republic Option?