The $24 million pay settlement led by US Women’s National Team football icons Megan Rapinoe and Alex Morgan’s is a “heartbreaking and infuriating” empty promise that has let down their former teammates and national team successors, legendary goalkeeper Hope Solo has claimed.

National team captain Rapinoe hailed the class action equal pay lawsuit, settled by a group of 28 players against the US Soccer Federation (USSF) on Wednesday, as a “monumental win”.

2015 Women’s World Cup winner Solo clearly does not agree, strongly suggesting that Team USA heroes Rapinoe and Morgan were speaking disingenuously when they hailed the USSF’s commitment to paying their women’s and men’s national teams equally in friendlies and tournaments under a collective bargaining agreement.

The equal pay part of the suit was dismissed in May 2020 before being revived by an appeal last July.

“This settlement is not a ‘huge win,'” said Solo, who has previously criticized the way she says former Ballon d’Or Feminin winner Rapinoe would “almost bully” teammates into taking a knee for Black Lives Matter. 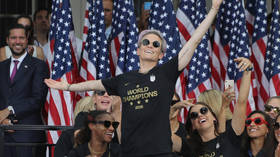 “It’s heartbreaking and infuriating. A ‘promise’ of equal pay from the federation and backpay for a select group of players isn’t equal pay and it’s not what this fight was about.

“Read the fine print. ‘Contingent upon the negotiation of a new collective bargaining agreement.’ It doesn’t exist yet and is not guaranteed.”

“Six years ago, we started the fight for equal pay – something I’m very proud to say I led when I pushed to bring on a new Players’ Association Executive Director, Rich Nichols, someone I knew would truly fight for us and give us the tools to challenge a federation that marginalized us for decades,” she said.

This settlement is not a “huge win.” It’s heartbreaking and infuriating. A “promise” of equal pay from the Federation and backpay for a select group of players isn’t equal pay and it’s not what this fight was about.

Heather O’Reilly, Amy Rodriguez, Sydney Leroux, Lauren Cheney, Lori Chalupny and everyone else on the 2015 team who set this fight in motion will not benefit from the selfishness and inequality of this settlement.

“His strategy to file the Equal Employment Opportunity Commission complaint was the boldest action any team had ever taken.

“It wasn’t an easy ask of anyone and, at the time, the decision went against the wishes of other players on the team [who are] now being called the ‘leaders’ of this fight.

“Throughout the entire process, Megan Rapinoe and Alex Morgan were the two most agreeable with the federation and, to this day, continue to accept terms that are nowhere near what we set out to do.

“They both know this is not a win. They know it’s an easy out of a fight they were never really in.”

The 40-year-old warned that members of the 2015 team who had “set this fight in motion” did not stand to benefit from the “selfishness and inequality” of the settlement.

“It also guarantees nothing to the next generation of players,” she said. “The equal pay case against US Soccer which I filed on behalf of the team long before the team sued still stands and I remain committed to fighting for all players – past, present and future.”

Speaking after the deal was announced, OL Reign star Rapinoe insisted that it was a triumph for the next generation of players and women’s footballers worldwide.

USSF president Cindy Parlow Cone, whose organization canceled Solo’s contract after she branded Sweden’s team “cowards” in 2016, said resolving the pay case had been a top priority for her.

“I continue to be optimistic that we are going to get this done and, like Megan says, I think this is a win for US soccer, [and] so [a] win for women’s team sports, and women in general,” Cone told ESPN.

One of Solo’s supporters on Instagram, where the 40-year-old has more than 947,000 followers, told her: “You’re not wrong.

“I do think it important to celebrate small victories but this settlement is less than the women deserved and certainly gives US Soccer great optics without commitment.”

How Does It Work and Why Is It Important? –

A worthy successor to the Buds Z despite its shortcomings- Technology News, Firstpost

How to help clients manage stress