American welterweight contender Logan Storley scored the most significant win of his MMA career, then called for a shot at the Bellator title.

The bout marked the first time Bellator MMA had hosted a non-title main event bout over the full five-round duration and, after three rounds of steady back-and-forth striking, the bout exploded into life in the fourth round.

First, Gracie appeared to badly hurt Storley with a punch to the eye. But, after the American gamely fended off the Brazilian’s attempt to finish the fight, Storley struck back with big punches of his own that eventually sent Gracie to the canvas.

However, like Gracie earlier in the round, Storley was unable to finish the fight, meaning the bout headed into the final round with the result still hanging in the balance.

And, after Storley pushed the pace on Gracie for the majority of the final five minutes, the bout went to the judges, who all scored the bout in the American’s favour with scores of 48-47, 50-45, 49-46.

“I’m a fighter now. That proved it right there,” said Storley following his victory in Uncasville.

“Any doubt I ever had about taking a punch [or] fighting the best guys – that was the number four guy in the world, and I just beat him. That was 25 minutes on the feet – that was the most fun I’ve ever had competing in my life, I’ll say that.”

Storley’s win improved his record to 13-1, with his lone defeat coming via split decision to current welterweight champion Yaroslav Amosov.

The undefeated Ukrainian puts his title on the line against England’s Michael ‘Venom’ Page at Bellator London on May 13, and Storley said he wants to face the winner for the title in his next fight.

“I want the belt. That’s why I got in this business,” he stated.

“I didn’t get it done at NCAA [National Collegiate Athletic Association] level and that drives me today – to be the best in the world.

“I want to be the best in the world, and I want the title next.”

Koreshkov, 31, finished American Chance Rencountre with a spinning back-kick finish in just 38 seconds to continue his rise back up the welterweight division since his return to the promotion in 2021.

And, after his quickfire TKO finish of Rencountre, Koreshkov called on Bellator to book him against Daley at Bellator London on May 13.

“Hey Bellator! I know you prepare many tournaments in Europe, and I know one guy: ‘Semtex’ Daley, Paul Daley. I’ll kick his a** in London!” he said.

“He doesn’t like wrestling, like me. We’ll show a great stand-up fight and I’ll knock him out.” 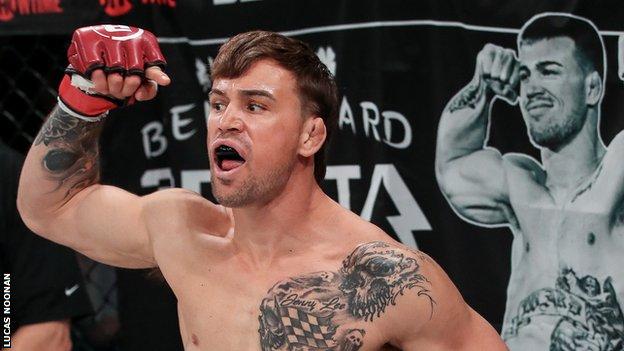 The event also marked the emotional return to the Bellator cage of Brennan Ward, who made his first appearance since 2017 after battling back from drug addiction that kept him away from the sport for more than four years.

New London, Connecticut native Ward was roared to the cage by the Uncasville crowd, and the 33-year-old former middleweight title challenger had his fans on their feet as he produced a dominant display to finish Brandon Bell in the second round of their 175-pound matchup.

After his victory, the American said he planned to continue his comeback by returning to top-level action against highly-ranked opposition.

“And you know that you’re going to have to see me face a top 10 guy next.

“I know [Bellator president] Scott Coker’s going to pick me out somebody good … test one of these young guys like I used to get tested when I was a young guy coming up. I’m the gatekeeper now!”

Earlier in the night, heavyweight prospect Davion Franklin extend his unbeaten record to 5-0 with a split-decision victory over Said Sowma.

Franklin, 27, defeated three of his first four opponents via first-round knockout but Sowma proved a much trickier proposition for the American, who only started fighting professionally in 2020.

Despite struggling to land his heavy punches cleanly on his opponent, Franklin did enough to earn the nod of two of the three cage-side judges as he took the win with scores of 29-28, 28-29, 30-27.

Elsewhere on the main card, lightweight Adam Piccolotti returned to the win column with a unanimous decision victory over 45-fight veteran Georgi Karakhanyan.

Piccolotti, 33, lost a split decision to Sidney Outlaw at Bellator 244 in August 2020 and he was forced to pull out of subsequent bouts with Karakhanyan and England’s Saul Rogers in 2021.

But on Saturday night he returned in determined form as he held the upper hand through the majority of his bout with Karakhanyan to earn scores of 30-27, 29-28, 29-28 and improve his record to 13-4.

“As Governor I Will Not Take Any Orders From Joe Biden He’s Illegitimate. That Election Was a Sham” (VIDEO)

These Baked Cranberry Glazed Wings are the Perfect Fall Appetizer

State of Play: Sony dropped many trailers for PlayStation VR2 games, check them out