Cops say that Bob Saget died after hitting the back of his head on his bed’s headboard – despite doctors saying that his injuries were so severe they looked like he had been hit with a baseball bat.

Saget was found dead of a brain bleed on January 9 in his hotel room at the Orlando Ritz-Carlton.

Saget’s family have filed an injunction to prevent the release of further records about the tragedy, though police are now saying he most likely slammed his head on a wooden portion of his headboard and went unconscious, sources close to the investigation told TMZ on Wednesday.

Saget’s death was ruled an accident with no foul play and sources told TMZ that the electronic front door lock to his hotel room shows no one else entered the room after him the night before. It was only opened again the next afternoon, when hotel staff found him dead.

Candace Cameron Bure, who was Saget’s co-star on Full House and its reboot Fuller House, said developments in the late actor’s death raise ‘a lot of questions’ and have led to a ‘difficult’ past few weeks.

Cameron Bure opened up in a Fox and Friends interview the same day a judge granted Saget’s family the restraining order it requested to block the release of photos from the scene of his sudden death at 65. 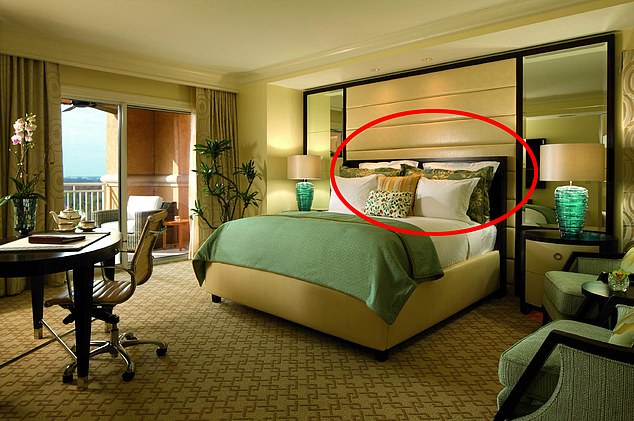 Police are saying that Bob Saget most likely died after hitting his head on the headboard of his bed at the Ritz-Carlton in Orlando. Above is one of the hotel’s bedrooms 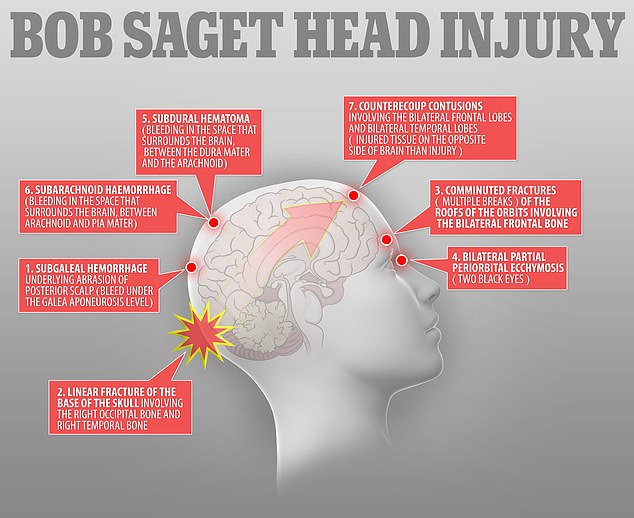 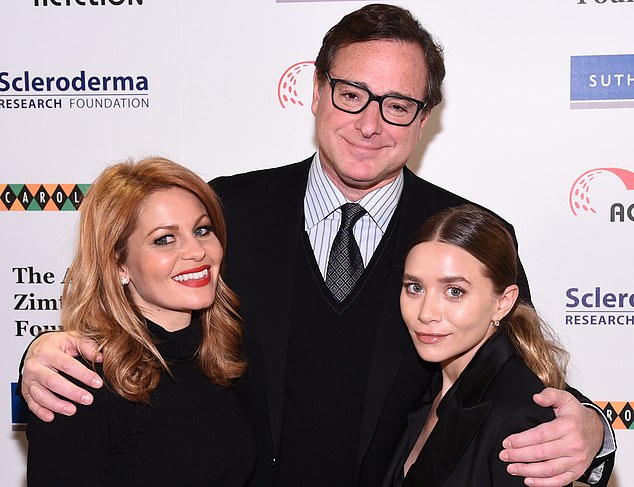 Saget was found dead on January 9 in an Orlando hotel room, which police are now saying happened after he hit his head on his bed’s headboard and went unconscious. Saget is above (center) wit Candace Cameron Bure (left) and Ashley Olsen, who played his daughters on Full House

His family on February 9 attributed to the actor’s death to him hitting his head and going to sleep without knowing the gravity of his head trauma.

But an autopsy released two days later raised fresh questions when it revealed that his injuries were much more severe than a typical slip and fall, with one analyst saying appeared consistent with being hit with a baseball bat or falling 30 feet.

‘It’s been difficult, these past couple of weeks, because of more things that have come out. And there’s a lot of questions,’ Cameron Bure told Fox and Friends on Wednesday.

‘And I’m trying honestly not to think about it in the sense that I just – I want to remember Bob and what a kind and loving and amazing person that he was. And let it be that,’ the actress concluded.

Saget’s family sought an injunction on Tuesday against the medical examiner’s office and the Orange County Sheriff to prevent the release of any records – including photographs, video and audio recordings, and ‘statutorily protected autopsy information’ – related to his death.

They have since been granted a restraining order to stop Orange County police from releasing photos from the scene at his hotel.

Sources added that officials who found Saget’s body did not see a bruise on his head, which was only discovered during his autopsy. 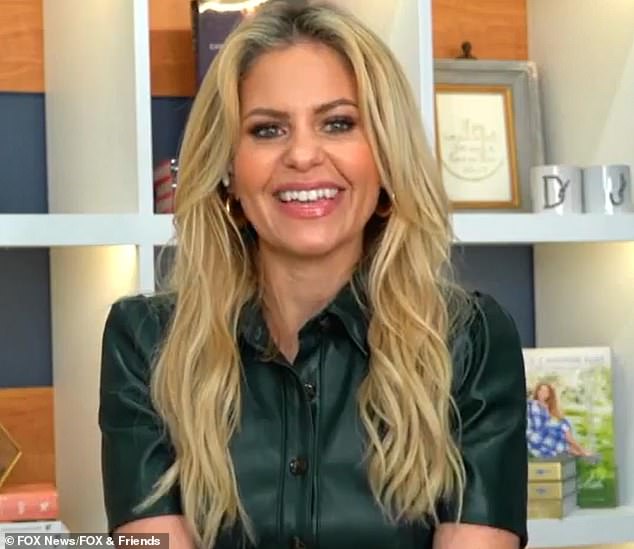 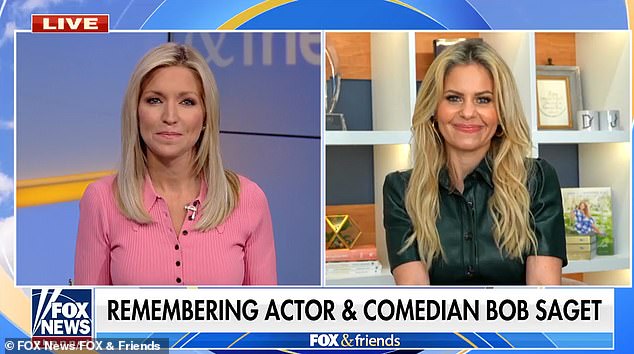 Candace Cameron Bure, Saget’s Full House co-star, said in a Fox and Friends interview that developments in the late actor’s death raise ‘a lot of questions’ 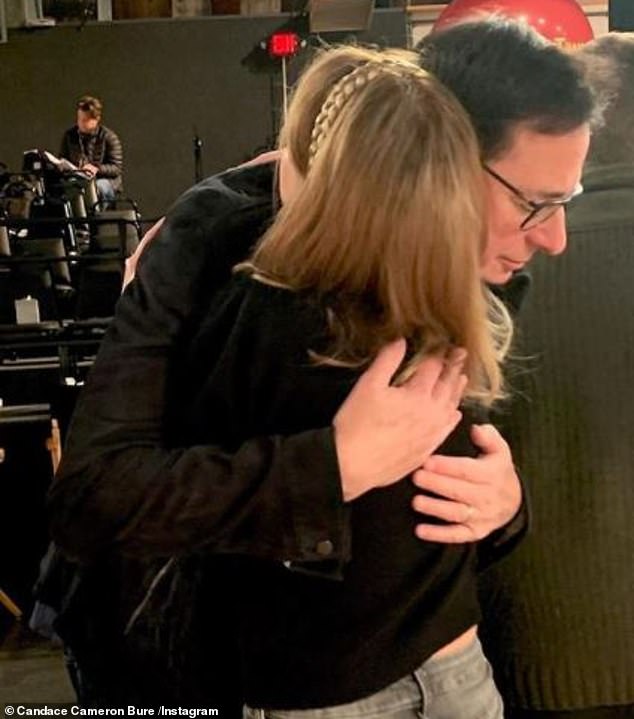 Cameron Bure spoke on Fox and Friends the day Saget’s family was granted a restraining order to stop the release of photos from the scene of his death. The two are pictured above embracing on the set of Fuller House, where they played father and daughter

On February 9, Saget’s family said that he had died of a head trauma, saying in a statement: ‘They have concluded that he accidentally hit the back of his head on something, thought nothing of it and went to sleep.’

Yet on February 11, the chief medical examiner of Orange and Osceola counties said that Saget had serious skull fractures – raising questions about the previous explanation.

On Tuesday, Saget’s widow, food blogger Kelly Rizzo, 42, and his three daughters – Aubrey, 34; Lara, 32, and Jennifer, 29, whom he shared with ex-wife Sherri Kramer – petitioned to stop the release of further information about Saget’s death.

‘Plaintiffs will suffer irreparable harm in the form of extreme mental pain, anguish, and emotional distress if Defendants release the Records in response to public records requests or otherwise disseminate the Records for any other reason or purpose,’ the lawsuit stated, according to a copy obtained by ABC News.

Health experts are now asking how thoroughly his death was investigated and what might have caused Saget such a ‘significant blow to the head.’

Saget was also COVID-19 positive when he died, though it did not play a role in his death, Joshua Stephany’s report added – although that was not a contributing factor in his death.

‘I think what it reveals more than anything else is this was not a simple bump on the head,’ said neurosurgeon Dr. Sanjay Gupta, CNN’s chief medical correspondent.

‘When you read this autopsy report that may still be the case, but it was a pretty significant blow to the head.’

A graphic depicted by CNN highlights the bones in Saget’s head that were cited as being fractured, which includes a stretch of bone from the front of his skull to his front temporal bone, in addition to fractures above his eye sockets. 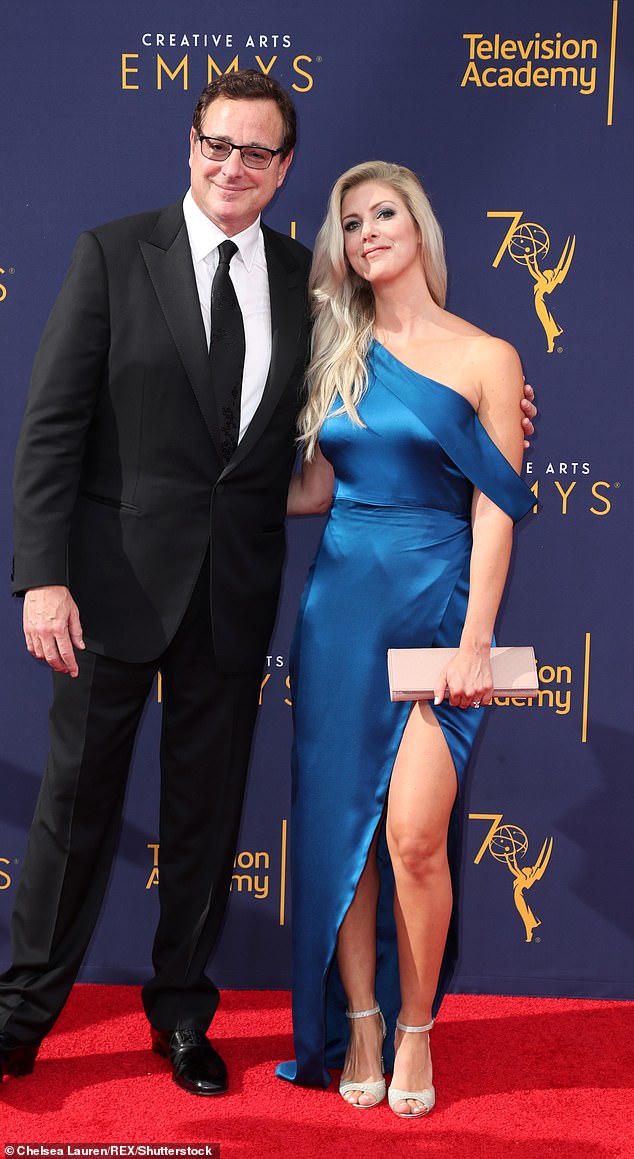 On February 9, the family said he died of head trauma, adding he ‘accidentally hit the back of his head on something, thought nothing of it and went to sleep.’ Bob Saget and wife Kelly Rizzo are pictured in September 2018. Saget, 65, died on January 9 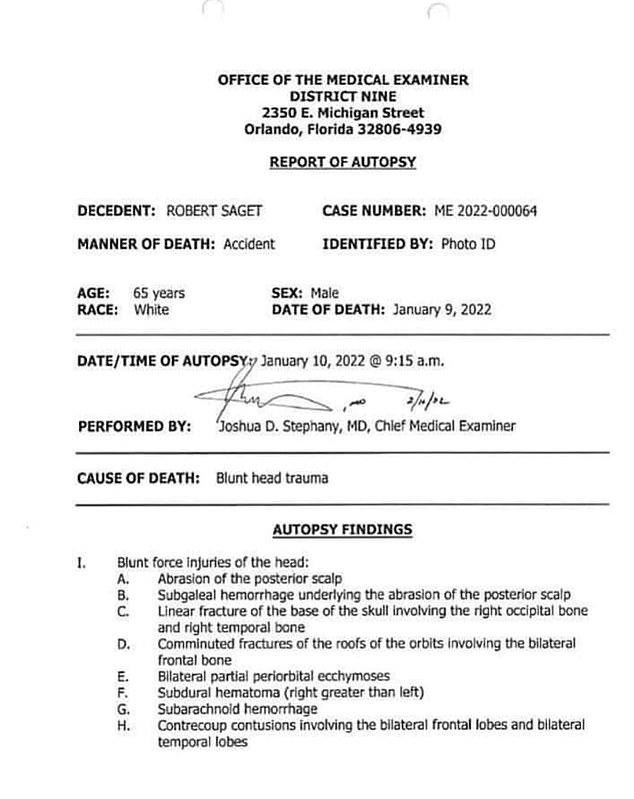 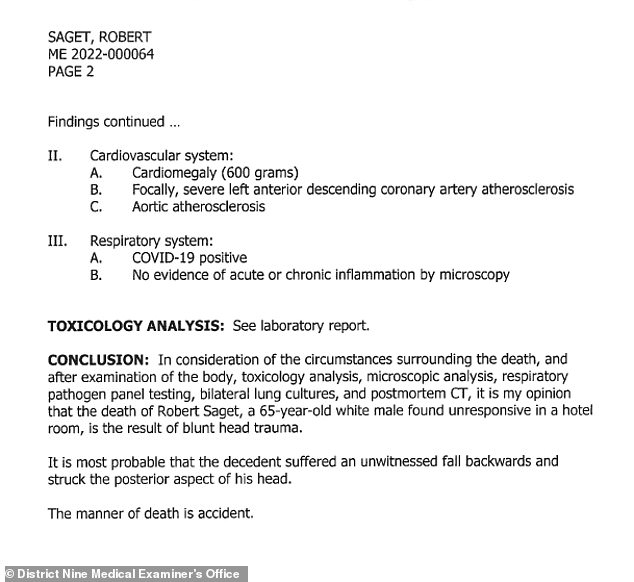 ‘That takes a lot of force to do that. If I knew nothing else about what had happened, you’d think this was someone who had fallen down the stairs and had several impacts to the head or been unrestrained in a car accident,’ Gupta said.

‘Whatever happened here, we may never know how he fell or what happened, but it was a significant blow that caused that.

‘And likely, the bleeding on top of the brain is likely causing pressure on the brain and subsequently, sadly, what led to him becoming unconscious and dying.’

Dr. Gavin Britz, the chair in neurosurgery at Houston Methodist Hospital, told the New York Times: ‘This is significant trauma.

‘This is something I find with someone with a baseball bat to the head, or who has fallen from 20 or 30 feet.’

He pointed out that Saget’s fractures were not only widespread, but in particularly thick parts of his skull.

‘If you fracture your orbit, you have significant pain,’ he added, referring to the areas around the eyes.

Byron York, the Washington Examiner’s chief political correspondent, responded to the autopsy report by questioning whether the initial investigation could have gone deeper.

‘This is really odd. Makes you wonder about the thoroughness of the original investigation of the scene,’ he tweeted.

Former AUSA-SDNY Richard Signorelli weighed in and suggested that there may have been foul play involved in Saget’s death, despite officials ruling it an accident.

‘No wrongdoing found. Something doesn’t make sense given his severe head injuries,’ he tweeted.

‘My condolences to Saget’s friends & family. I hope that they get answers as to what really happened,’ she tweeted. 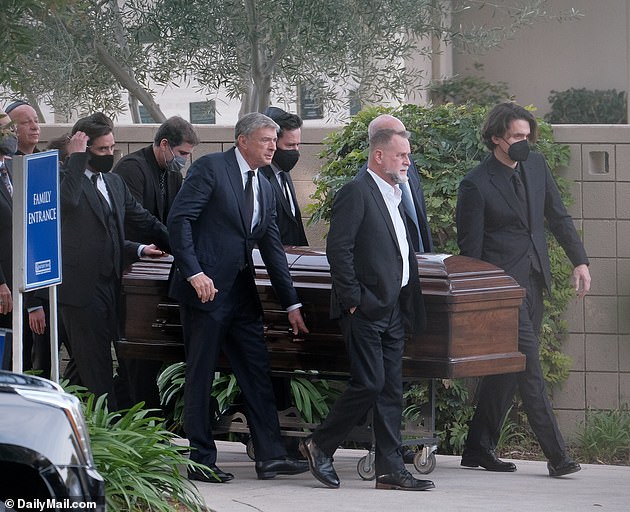 Saget was found dead in his hotel room at The Ritz-Carlton in Orlando, on January 9 after performing a stand-up comedy show. A private funeral was held for the entertainer in Los Angeles on January 14 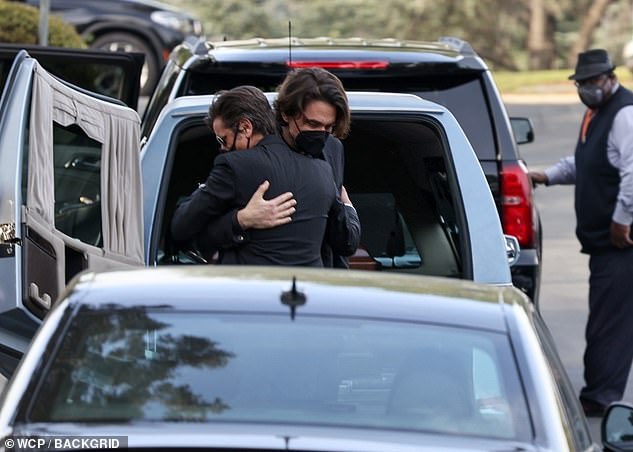 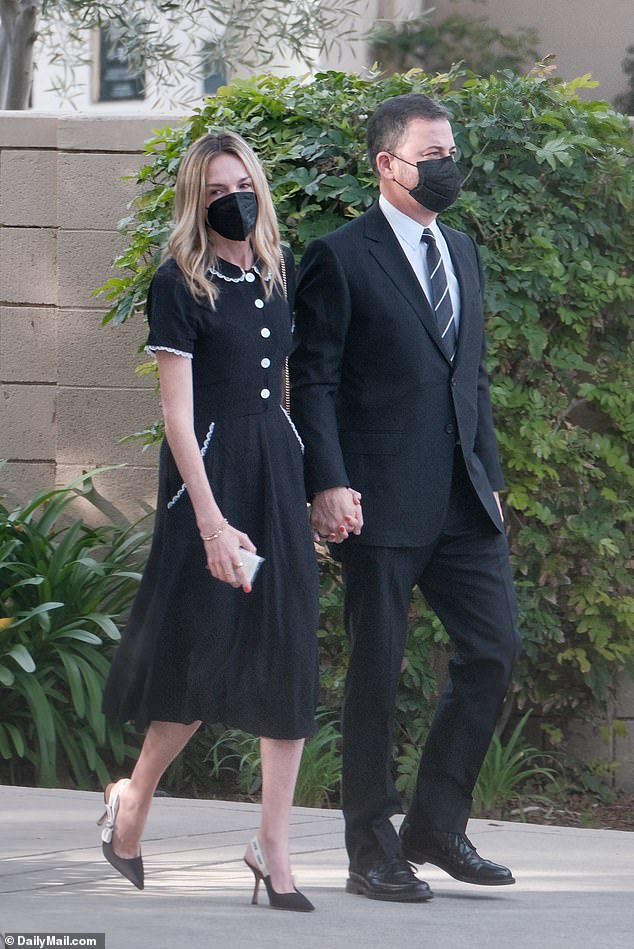 Cameron Bure said that the death of her co-star sinks in when she hears his voice in clips of Full House or its reboot Fuller House. Cameron Bure has been a regular on the show since its debut in 1987 and played D.J. Tanner, the eldest daughter of Saget’s Danny Tanner.

Before introducing her on the Fox and Friends segment, the network played a tender clip of the father-daughter duo that shows D.J. as a middle school student talking about all the opportunities she seeks to pursue when she grows up.

‘When I get into high school, I get to go out on dates, stay up really late, backpack across Europe with my boyfriend,’ she says, before Saget delivers one of his fatherly speeches that were a staple on the show.

‘Wait, wait a minute. We’ll fight about that part later,’ he starts, before saying: ‘My point is, don’t miss out on what’s happening right now just because you’re waiting for something better to come along. You can’t live for the future, just like you can’t live in the past.’

Cameron Bure said that hearing that clip ‘just brings back so many memories.’

‘And that’s when it – it grabs me. It’s a little hard to hear those clips,’ she added.

Cameron Bure said that Saget radiated warmth on the set of Full House. ‘He always carried his emotions right at the surface in the best of ways. He was so emotionally available. And he just always, always let you know that he loves you,’ she said.

‘Every text, every phone call, every moment in person, he would give you the biggest hug. And he always let you know how much he cared about you. And that is such an incredibly powerful gift that he gave,’ she concluded.

Cameron Bure shared with Fox and Friends that she created a graphic t-shirt to honor Saget and his hugs, which reads: ‘Love like Jesus, hug like Bob Saget.’

She plans to send all proceeds from sales of the shirt to the Scleroderma Research Foundation, a San Francisco-based nonprofit that works to combat the autoimmune disease that took Saget’s sister Gay’s life in 1994. Saget raised millions of dollars for the nonprofit throughout his life.

‘He’s the best example of humanity and sacrifice,’ Cameron Bure said of his on-screen father.

7 Effective SEO Techniques to Drive Traffic to Your Website