Three patients completely paralyzed from the waist down due to irreparable damage to their spinal cords regained the ability to move again with the help of a new nerve-stimulating device.

Scientists from the Swiss Federal Institute of Technology in Lausanne reported on Monday that three men aged 29, 32 and 41, paralyzed after biking accidents, were able to take their first steps within a single day after the device was implanted.

In the following months, they were able to engage in more advanced physical activity, using the remotely controlled device that is tailored specifically to each patient and based on artificial intelligence algorithms. The results of this study were published in Nature magazine. 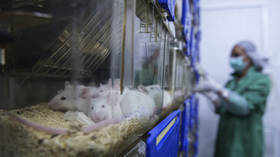 Gregoire Courtine and Jocelyne Bloch, leaders of the research team, have also helped establish a technology company to develop commercial production of the device. They expect to launch a large-scale trial involving up to 100 patients within a year, Reuters reported.

People with a complete spinal-cord injury become paralyzed because signals from their brains cannot reach their limbs. There is no existing method to allow the spine to be healed, but in order to help such patients, scientists tried to use implanted devices that stimulate nerves with the help of electrical fields.

The Swiss scientists modified this approach, using a specific electrode positioning, allowing electric signals to target very specific spinal-cord regions, and then developed AI-algorithms to quickly adapt these signals to activity-specific programs, such as standing up or cycling, reproducing natural activation of the corresponding neurons.

The patients were able to perform individual activities but their muscles were still weak from disuse, and they needed help to bear weight. The scientists also warned that the patients working with their technology did not regain the ability to move naturally, although with sufficient training their movements can become more fluid and accurate.

The Therapeutic Benefits of Reading

5 Best Varieties of Basil To Grow at Home