Nineteen days later came the murder of NYPD Officer Jason Rivera in Jordan’s Harlem district, and she was crooning a slightly different tune: “A loss of one is a loss to the whole,” she said. “I stand with the families of the fallen.”

An act of contrition? Or a statement of convenience?

Most likely the latter. For one thing, standing “with the families of the fallen” isn’t the same as standing with cops willing to give their lives for your constituents. For another, it’s really, really hard not to picture a thought bubble over this bitter woman’s head: “One cop down, 35,999 to go.”

Still, as this newspaper detailed over the weekend, Jordan wasn’t the only usual suspect to be trimming rhetorical sails following Rivera’s murder. Some were backtracking so egregiously that maybe something besides vice paying homage to virtue is going on.

Take Public Advocate Jumaane Williams: “Hiring police officers is sending the wrong message,” he said right after Macy’s Herald Square was looted in 2020. But post-Friday came this: “[Rivera died] while trying to protect another New Yorker’s safety as countless officers do every day.”

Or Attorney General Letitia James. Before: “Policing is embedded in racism.” After: “All of New York is in mourning tonight. We pray for the safety of our police.” Even Manhattan DA Alvin Bragg, who opposes effective law enforcement as matters of principle and policy, tweeted “violence against police cannot be tolerated. We are actively working to hold the shooter accountable.”

But it remains that had the killer not shot anybody, but meekly surrendered his weapon — it was a Glock with a grotesque 40-round extended magazine — he likely would have been back on the street within hours in accord with Bragg’s no-“carceral”-prosecutions policies.

Yet the DA clearly was shaken by Friday’s bloodshed, just as he was rattled by the harsh general reaction to his soft-on-crime policies — and especially by the opposition of Manhattan’s business leaders. 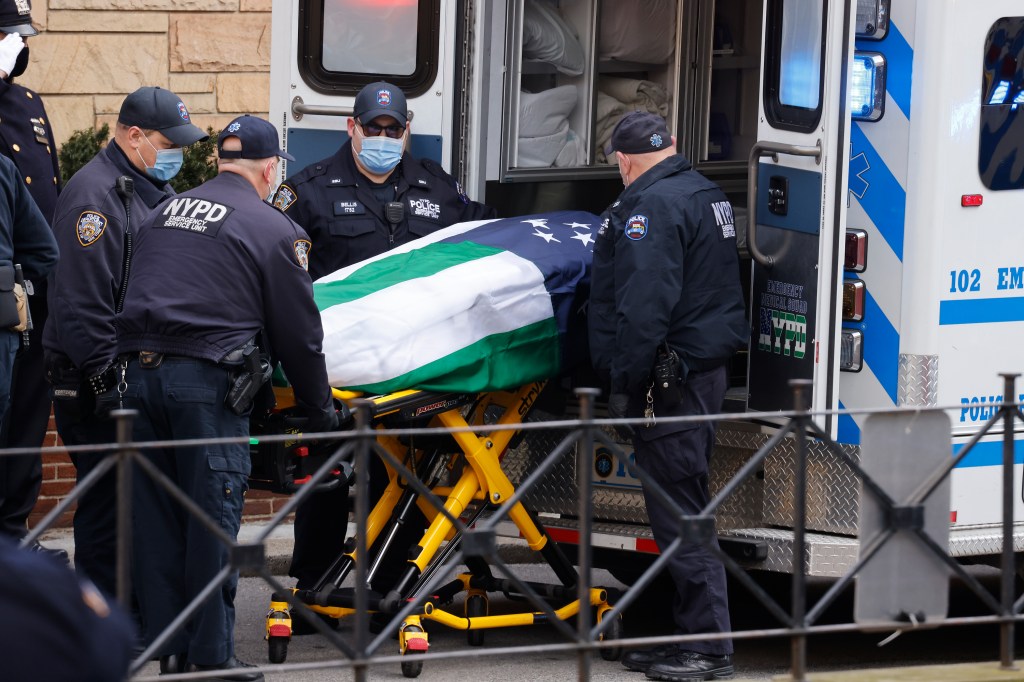 The body of police officer Jason Rivera, 22, is brought into Riverdale Funeral Home in Inwood.(Kevin C. Downs for The New York

Kathy Wylde of the Partnership for New York City is a municipal treasure, but she’s not one to stir pots in public. Her startlingly uncharacteristic early criticism of Bragg sent a stern message: The community that had invested uncounted billions in the city’s post-Giuliani- Bloomberg resurrection wants no part of the DA’s brave new world.

This attitude is something New York’s antipolice political class will ignore at its peril — for the city seems to be waking up. When a rookie cop, an accomplished career woman and a 19-year-old fast-food cashier are murdered by violent career criminals on successive weekends, people pay attention.

And there’s more to it than that — social media dramatically concentrates attention, too.

The last time New York fell into the abyss, folks were pretty much on their own — isolated, aware of their own victimizations but lacking firsthand awareness of others’ experiences.

And so it took a long time — too long — to build a successful, reform-driven political coalition.

But this time, maybe not so long? This time — as each successive outrage, and so many personal encounters with crime — reverberate across social media, maybe critical mass comes sooner? After all, it’s not necessary to change Alvin Bragg’s heart — just his policies.

Here’s hoping for a smartphone revolution.

The coolest mind-control wearables to help you relax » Gadget Flow