The Federal Bureau of Investigation conducted a search of a Covid-19 testing company which has been accused of providing “inaccurate and deceptive” results and enriching its owners.

The Illinois headquarters of the Center for Covid Control – which has received more than $124 million from the US government for its Doctors Clinical Lab – was searched by federal agents on Saturday just days after the Minnesota Attorney General’s Office filed a lawsuit accusing the company of providing bogus test results.

FBI Chicago spokesperson Siobhan Johnson told USA Today that the Bureau “was conducting court-authorized law enforcement activity” at the company’s HQ in Rolling Meadows, while a spokesperson for the Illinois Attorney General’s Office told the newspaper that it was “absolutely committed to protecting residents from those who attempt to profit off of the deadly COVID-19 pandemic.”

Both the FBI and the Illinois Attorney General’s Office refused to elaborate on what “unlawful conduct” the company has been accused of engaging in, however the Minnesotan lawsuit alleged it had “fraudulently reported negative test results to consumers that never completed COVID-19 tests.”

Some customers complained that the Center for Covid Control never sent them their results, while others claimed they received a negative test result before they had even been tested.

In a statement on its website, Thursday, the Center for Covid Control announced that all of its locations would be closed until further notice.

“CCC is using this operational pause to train additional staff on sample collection and handling, customer service and communications best practices, as well as compliance with regulatory guidelines,” the statement read. “CCC will provide an update on reopening plans when appropriate.”

The owners of the company, 35-year-old Akbar Ali Syed and 29-year-old Aleya Siyaj, found themselves in even more hot water recently after Syed posted videos of luxury cars and a $1.36 million mansion to his now-removed TikTok account. 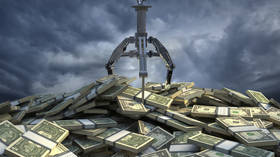 Syed and Siyaj purchased the mansion – which features a water fountain, white pillars, a private road with gate, and crystal chandeliers – in November and the Daily Mail suggested that the couple spent millions of dollars on luxury vehicles alone.

Syed allegedly made several incriminating statements on his deleted TikTok account. After one user asked Syed whether he had paid for a Lamborghini spotted in a video using “oil money,” Syed responded, “Not even sure what means… but no covid money.”

In a comment below a video of him bidding on another Lamborghini, Syed allegedly wrote, “My axe throwing lounges were forced shut by the gov due to covid… so I opened up a covid testing site than [sic] bought the lab and now I have 65 sites.”

Nvidia may abandon its $40B ARM acquisition

Issues with the Fashion business