When my youngest sister was a baby, I recall telling my mom through gritted teeth: “Ugh, she’s so cute, I can’t stand it. I just want to squeeze her!”

Years later, I still feel this overwhelming pull to squeeze adorable things: when my son belly-laughs, when my puppy rests his perfect little head on my lap or when I think about Baby Dory.

This burning desire to playfully squeeze, bite, pinch or growl at cute things — without any actual intention to harm — is called “cute aggression.” Social psychologist Oriana Aragón and her research team at Yale University gave this phenomenon its name. The term caught the media’s attention after it was presented at a 2013 conference, and it took off from there.

Lest you feel like some kind of weirdo for feeling this way, it turns out cute aggression is actually quite common. Aragón estimates that 50% to 60% of the population experiences it.

Cute aggression is an example of what researchers call “dimorphous expression” — when your internal feelings and the outward expression of those feelings seem to contradict one another. Other examples might include crying during joyful moments, like a wedding or the birth of a child, or laughing during an uncomfortable conversation.

Aragón and her Yale colleagues hypothesized that because dimorphous expression seems to occur when a person is overwhelmed with emotion, cute aggression could be a mechanism to help regulate these intense feelings. And they found some evidence to support that.

In their study, which was published in 2015, participants viewed photos of babies with more infantile features (digitally altered to have larger eyes and cheeks and smaller noses) and less infantile features (manipulated to have smaller eyes and cheeks and larger noses). Then they were asked to rate how strongly they agreed with statements such as “When I look at this baby, I feel like I am overwhelmed by very strong positive feelings”; “I feel like pinching those cheeks”; and “I feel like I want to take care of it.” Participants were also asked to gauge their emotional state before and after they were presented with the images.

Researchers found that the people who experienced feelings of cute aggression did “come down off the ‘cute high’ faster,” Aragón, now an assistant professor at Clemson University, told HuffPost. “They got really amped up with the cuteness” and then returned to a baseline state more quickly than those who didn’t experience cute aggression.

“It might be that this countervailing expression helps to tamp down the experienced emotion,” Aragón said. (However, it’s difficult to say whether the faux-aggressive feeling itself is what helped these people balance out their emotional state, or if people who experience cute aggression generally tend to move from emotional highs to lows more quickly.)

From an evolutionary standpoint, this makes sense. Research has established that infantile features encourage caretaking behaviors in adults.

“Ultimately, the baby’s well-being is served by cuteness eliciting both expressions of care and of aggression, because if the expresser is no longer incapacitated with overwhelming positive affect, that person may be better able to care for the baby,” the authors wrote in the study.

Infantile features, such as big, wide-set eyes and round cheeks, prompt caretaking impulses in adults.

Another potential function of cute aggression and other forms of dimorphous expression? To help communicate our current emotional state to others so they can glean how we might behave next.

Say you’re a parent taking your baby for a walk around the neighborhood. If a passerby comes up to you with a simple smile, that suggests a positive interaction is likely to occur. But you don’t have much information beyond that. However, if a person approaches and they’re displaying “cute sadness” — saying “Aww” with a pouty face and furrowed brows — that could mean they want to stop and calmly appreciate the baby. If someone approaches with a clenched jaw, saying, “Oh my God, your baby is so cute. I just want to devour those cheeks!” then it might signal that a more energetic encounter is about to take place.

“We find that in both cases, the mom or the caretaker of the baby understands that the person is complimenting the baby, the person thinks the baby’s cute,” Aragón said. “All these things are positive, but those two different dimorphous expressions send very different signals about how you want to interact with that baby.”

“This ability to communicate is really important, because if you understand that somebody wants to interact in a very riled-up way with your baby, you could intervene as the mom and say, ‘No, not right now, they’re going down for their nap soon,’” she added.

Interestingly, Aragón and her team also found that people who experience cute aggression are more likely to express emotion in a dimorphous manner across a variety of emotionally charged situations. In other words, those who want to pinch a baby’s chubby cheeks tend to be the type to cry at weddings, too. 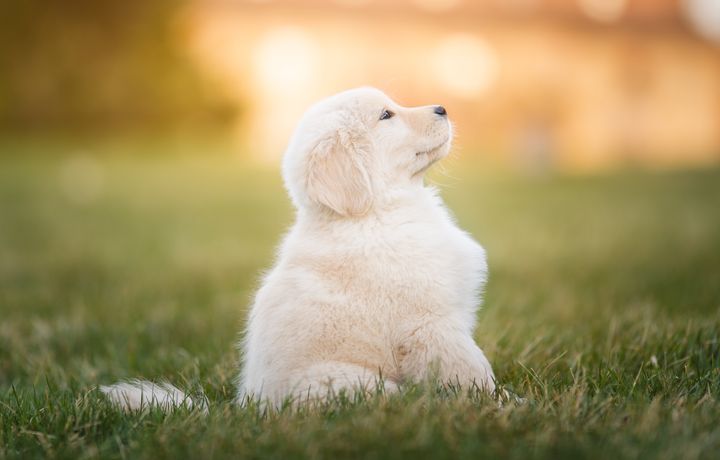 How bad do you want to squeeze this little floof?

Katherine Stavropoulos, a clinical psychologist and researcher at the University of California, Riverside, has also studied cute aggression. As it happens, her path to this line of research was a funny one. She primarily studies brain activity in kids with and without autism, with a focus on the reward system. Years ago, after Aragón’s research began going viral, BuzzFeed (HuffPost’s parent company) published a listicle about the signs you experience cute aggression. One of Stavropoulos’ colleagues saw it and ― knowing her desire to squish round, fluffy animals ― sent her the link.

That sparked a legitimate interest in the subject.

“I thought to myself, ‘Wait a second. I think this actually might have something to do with the reward system in the brain,’” she said. “This isn’t just like a funny phenomenon that there’s finally a name for, and I’m not just a freakish weirdo. Which I think is everyone’s reaction who feels this way, is like, ‘I didn’t know it had a name. I thought I was just weird.’”

Stavropoulos co-authored a study, published in 2018, that looked at what happens in the brain when you feel cute aggression. They ultimately found that the phenomenon involves both the brain’s emotional system and its reward system, which is responsible for feelings of wanting and pleasure.

In the study, participants looked at images of “cute” and “less cute” babies (the same ones Aragón used in her study), and “cute” and “less cute” animals (i.e., baby animals vs. adult animals). After viewing the photos, the participants rated how strongly they agreed with statements expressing cute aggression (e.g.“It’s so cute I want to squeeze it!”) and feelings of overwhelm (“It’s so cute I can’t handle it”), among others. Electrode caps measured electrical activity in different parts of the participants’ brains.

“The people that rated agreeing with the feeling of, ‘It’s so cute, I want to squeeze it,’ were the people with the most reward-related brain activity,” Stavropoulos said.

“It’s interesting to me, the role that that experience could play in cute aggression or, just in general, our development of these overwhelming emotions,” Stavropoulos said.

U.S. consumer prices soared 7 percent in past year, most since 1982