Olivia Rodrigo’s music may have sparked rumors she once dated her High School Musical: The Musical: The Series co-star Joshua Bassett, and the two had some breakup drama, but Rodrigo has moved on. E! reported on June 30 that the 18-year-old singer is dating someone new, 24-year-old producer Adam Faze. A source close to Rodrigo told the outlet that she brought Faze as her plus one to the Space Jam 2 premiere and introduced him as “her boyfriend.” The couple was photographed kissing for the first time over the July 10-11 weekend.

Their romance may have cooled off in the new year though. In January 2022, Page Six reported that Rodrigo unfollowed Faze on Instagram, and the two spent New Year’s apart. Rodrigo is no longer following anyone on Instagram, but Faze is still following her.

So who is Faze? Get to know Rodrigo’s partner and everything that has come out about their relationship so far.

Faze and Rodrigo publicly confirmed their relationship in July 2021 when paparazzi photographed them kissing in Los Angeles.

Rodrigo and Faze confirmed rumors they were dating themselves during the July 10-11 weekend. The couple was photographed kissing against an Audi while out in Los Angeles—and in the presence of paparazzi—as seen below. 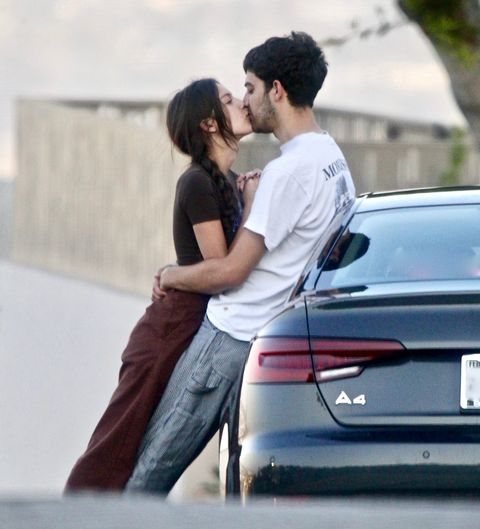 Faze and Rodrigo were first seen showing PDA during their Space Jam 2 date.

Rodrigo debuted her relationship with Faze in June 2021, E! reported. During their June 29 Space Jam 2 outing, Rodrigo not only introduced Faze as her boyfriend, but the two were affectionate at Six Flags Magic Mountain, where the event took place. “Olivia was in great spirits celebrating Space Jam 2 last night,” the source said. “They were really cute together and weren’t trying to hide their affection at all.” The source said that Faze and Rodrigo were “together the entire night” and were seen “holding hands at one point.”

A separate party goer, Stuart Brazell said, per E!, that “the two of them together felt comfortable and newish, and it seemed like he also knew a lot of people there. It just felt like comfortable, cuddly, new young love.”

Faze and Rodrigo dated a few months before going public and were “getting serious” in early July 2021.

E! was also told by a source that Faze and Rodrigo secretly started dating weeks before their Space Jam 2 outing. “[They] met through industry friends” the source said. “It’s only been a few months, but she seems really happy with him and they are definitely dating exclusively and getting serious.”

While Faze and Rodrigo attended their first event together at the end of June, the two are keeping their relationship offline for now. Faze’s personal Instagram is now private as reports of their dating break. His professional Instagram, itsnotafaze, is still public, and Rodrigo follows it. 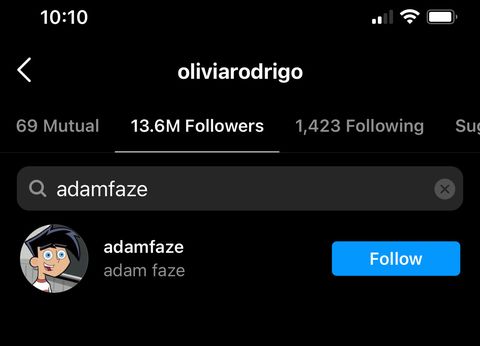 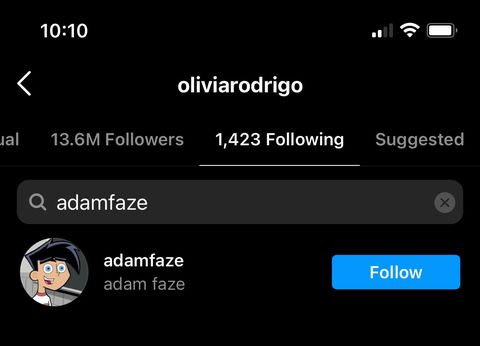 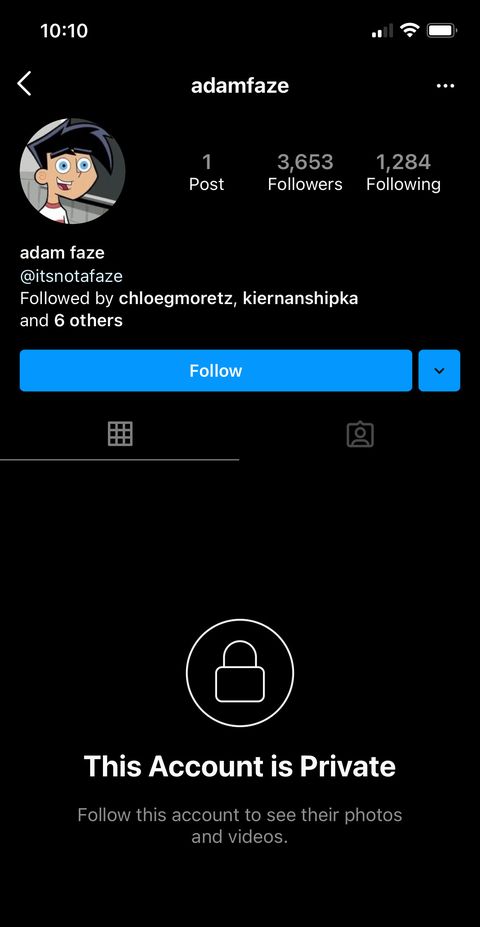 Page Six reported that it heard Faze was moving from Los Angeles to New York and noted the Instagram unfollow on Rodrigo’s side. It pointed out that the couple spent New Year’s Eve apart, and Rodrigo spoke to British Vogue in an interview published on December 30 about the best way to move on after a breakup. “Besides cutting off all contact, I think it’s important to not only forgive them, but forgive yourself for letting everything happen,” she said. “That’s what I’ve learned.”

Faze worked as a contributor for Forbes in 2017, when he was 20. According to his site bio, he described himself as “a twenty-year-old storyteller and creative entrepreneur focused on one thing and one thing only: the future of entertainment. Adam is the co-founder of Chateau Savant, an event series that launched this year during the Cannes Film Festival (May 18-26, 2017), and is represented by Brillstein Entertainment Partners and Ziffren Brittenham LLP.” 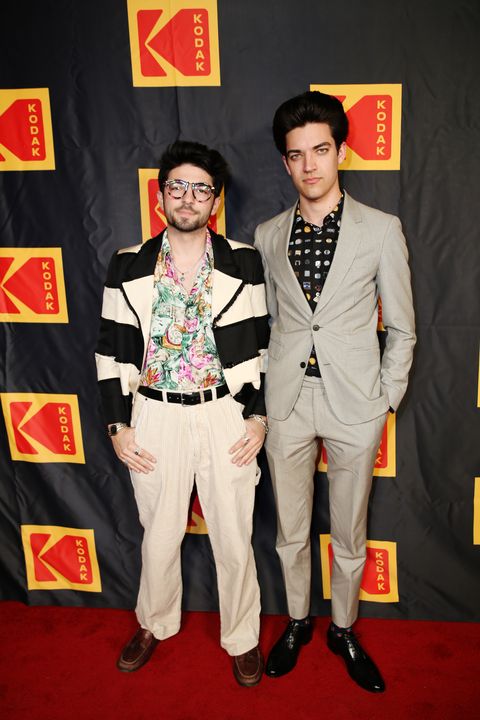 Faze has worked as a director, producer, and writer.

Faze boasts writing, producing, and directing credits on his IMDb page, with the bulk of his work happening in 2020 and 2021. Faze has a writing credit on TV series Day by Day, has served as executive producer for the series, and has produced two shorts, How Moving and River Fork, coming out this year. He notably directed “Nothing Good,” Goody Grace’s music video featuring G-Eazy and Juicy J. 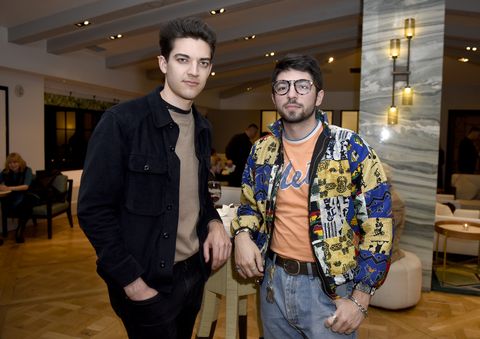 Faze runs a production company, Must B Nice, with Jamie Dolan.

Dolan and Faze began their production company last March, and its narrative podcast Day by Day has gotten considerable buzz. The two spoke to Backstage about the program and their business. Faze reflected on starting their company right as COVID began:

It’s funny, we had started our production company, Must B Nice, the first week of March. And literally a week later, it’s COVID and the world’s falling apart, and everything we had planned to do for the rest of the year was obviously not going to be happening anytime soon. There was a moment [when] we just sat there and were like, “We have to do something about this.” All our favorite writers are home and all our favorite actors are home, and if there’s one way we’re going to collectively get through this thing—which is not just going to be a two-week thing—it’s through storytelling and talking about what we’re all going through. Because for the first time on Earth, every single person has been impacted by the same thing. It was, like, three days into quarantine and we said, “It’s ‘Day by Day’; it’s this narrative podcast of stories inspired by what we are going through. Within a month, on April 17, we put out the first episode and started this biweekly show.

Faze added, “We never expected a narrative podcast to be the first thing out of our company, but it’s 100 percent representative of the type of company we want to have. Because in this changing landscape where there are so many different mediums, you have to always think on your feet. And at a time like this, when it became so much more challenging to produce anything, we wanted to do something, the best possible thing, knowing we can’t easily film. And so it was always going to be the audio space.”

Day by Day isn’t Faze’s first podcast. When he was 18, Faze had his own A Leg Up podcast where he interviewed people about making it in Hollywood as he tried to kickstart his own career there.

Alyssa Bailey
Senior News and Strategy Editor
Alyssa Bailey is the senior news and strategy editor at ELLE.com, where she oversees coverage of celebrities and royals (particularly Meghan Markle and Kate Middleton).