Take an online journey through the history of math

Around 1900 B.C., a student in the Sumerian city of Nippur, in what’s now Iraq, copied a multiplication table onto a clay tablet. Some 4,000 years later, that schoolwork survives, as do the student’s errors (10 times 45, for example, is definitely not 270). The work is a reminder that no matter how elegant or infallible mathematics may seem, it’s still a human endeavor.

That’s one lesson I took from “History of Mathematics,” an online exhibit developed by the National Museum of Mathematics in New York City and Wolfram Research, a computational technology company. Bringing together the Sumerian tablet and more than 70 other artifacts, the exhibit demonstrates how math has been a universal language across cultures and throughout time.

Divided into nine “galleries,” the exhibit sums up the development of key topics related to mathematics, including counting, arithmetic, algebra, geometry and prime numbers. Each gallery has a short timeline and features a handful of artifacts that serve as entry points to explore some milestones in more depth.

Among the highlights: The oldest known surviving calculating device, the Salamis Tablet, is a marble counting board from the Greek island of Salamis dating to 300 B.C. It’s a precursor to the abacus. By moving pebbles across the board, a person could perform calculations. An early documented instance of using a symbol for “zero” as a placeholder (to, say, distinguish 1 from 10, 100 or 1,000) appears in the Bakhshali Manuscript, an Indian text dating to perhaps as early as A.D. 300. The manuscript’s black dots eventually morphed into the open circles we know today as zeros. Also on display is Al-Jabr. Written in around 820 by Persian polymath Muḥammad ibn Mūsā al-Khwārizmī, the book established the field of algebra and gave the discipline its name. In 1557, the Whetstone of Witte, an English algebra text, introduced the modern equal symbol.

But the exhibit is more than just a collection of fun facts. As the galleries explain, humans’ relationship with numbers goes back deep into prehistory. Modern math, however, stems from the rise of cities, with the need to keep track of people and supplies, and to undertake ever more complex construction projects.

Some mathematical principles must have been so vital to civilization’s success that they appeared in many ancient cultures. Take the Pythagorean theorem. The Greek philosopher Pythagoras, who lived in the sixth century B.C., famously related the side lengths of a right triangle in the equation a2 + b2 = c2. But a clay tablet reveals that people in Mesopotamia had worked out the relationship more than 1,000 years earlier. Ancient Chinese and Indian scholars were also familiar with the relationship. 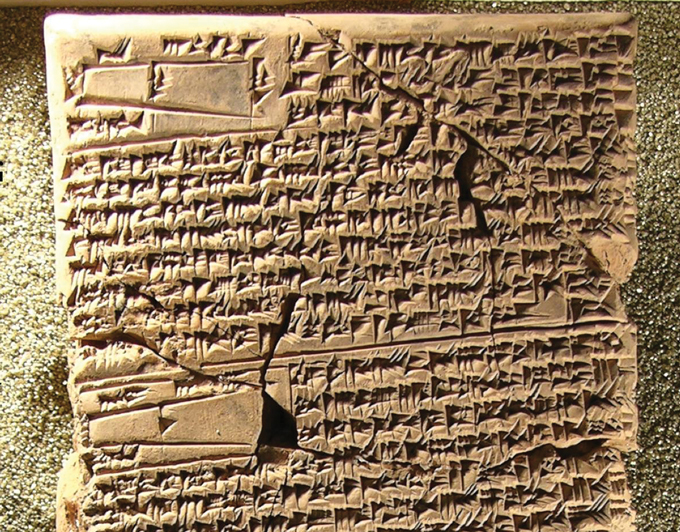 This tablet, dated to as early as 2000 B.C., shows several math problems and drawings of trapezoids and triangles. The text suggests that people in Mesopotamia grasped the Pythagorean theorem long before the Greek philosopher Pythagoras, for whom the theorem is now named, lived.Schoyen Collection

Other math problems have had multiple solutions. The history of counting is littered with an array of methods for keeping track of numbers, from various forms of finger counting to the stringed recording devices called quipus, or khipus, used in the Inca Empire in the 1400s and 1500s. The placement and types of knots along a quipu’s strings indicate different numerical values, though researchers today are still trying to understand exactly how to interpret the data recorded on these devices (SN: 7/6/19 & 7/20/19, p. 12).

Parts of the exhibit assume a high level of mathematical knowledge, such as some of the interactive features that give technical explanations behind some artifacts’ mathematical principles. But a section of “learning journeys” aimed at “kids and others” provides materials that fill in some of the missing details from the main galleries and will appeal to adults whose memories of high school or college math are fuzzy.

“History of Mathematics” is a fascinating starting point for anyone interested in learning about the origins of the mathematical concepts that so many of us use every day but often take for granted.

Bitcoin rebounds over $41K after painting a ‘bullish hammer’ — Can BTC hit $64K next?