Emma Raducanu’s ascent to superstardom has been so swift, sharp and stunning that the story would be dismissed as fantasy if it wasn’t still fresh in the memory.

Winning the US Open as an 18-year-old qualifier without dropping a set – in only her fourth senior tournament – has brought fame and scrutiny the Briton would have never imagined six months ago.

The lens of the world will focus on Raducanu when she starts her Australian Open campaign on Tuesday as the sport’s latest female major champion.

It is easy for some to forget – particularly mainstream sports fans whose skewed expectations may demand similar success – that Raducanu is starting her first full season on the WTA Tour.

“How she develops in 2022 is the big question and it will be exciting to watch,” said Anne Keothavong, Britain’s Billie Jean Cup captain and former tour player.

“This is a unique position for Emma to be in, we’ve never seen it in tennis before, someone with seemingly little experience going on to achieve what she has achieved in such a short space of time.

“She is yet to play a full year on the WTA Tour and until she really has that under her belt, I think it is difficult to make any predictions.”

Raducanu, who turned 19 in November, is realistic herself. She is trying to dampen expectation – both internally and from the outside.

“I appreciate all the support I’ve been given and I’m very grateful. It is a journey, I need to learn to be patient and need patience from those watching,” she told BBC Sport at Melbourne Park.

“I need a little bit of space to learn to develop myself and figure out what works. I am just starting out.”

Coping with being the target

When she breezed through the US Open draw, Raducanu overcame opponents who were unfamiliar with her game and unable to prevent her executing it.

Now she is more of a known quantity who other players see as a prized scalp.

Two-time Grand Slam champion Tracy Austin was aged 16 when she won the US Open title in 1979. While the American was already a top-five player and had tour experience after bursting on to the scene as a 14-year-old prodigy, she understands the pressures which Raducanu will face.

“Now everyone knows her game and she is a target. Beating Emma is a good win for her opponents and she is under the microscope. It is a lot to undertake,” said Austin.

“What I think is important for her is stepping back from the US Open and realising she has got to gain valuable experience.

“She needs to play matches and not pay attention to what is being said in newspapers or on social media. She needs to be in a cocoon.”

Raducanu’s preparations for the Australian Open were hampered by testing positive for Covid-19 in the run-up to Christmas and she lost heavily to Kazakhstan’s Elena Rybakina on her return to court in Sydney last week.

“I like how she went straight to the practice court after that defeat and said she wanted to keep putting herself out there,” added Austin. “That is a good attitude for someone who struggled in that match.

“Attitude is going to lead everything. Her game is there, it won’t leave her, it’s just the question of earning valuable experience.

“Usually you get to sink your teeth into matches and grow, you’re building gradually. She almost has to build backwards and that’s not easy.”

The challenges of travelling on tour full-time

Grind is a word which is often used to describe the rigours of the WTA Tour.

Plenty have been grounded by playing on the lower-tier tours, providing them with a taste of the requirements before stepping up to take their place among the elite.

Raducanu has not had that benefit after largely bypassing the WTA Challenger series and the ITF Women’s Circuit with her astonishing rise.

“For most players who make the transition from the juniors to pro tennis, the first year on tour is a real eye-opener,” said Keothavong.

“Most players would start out playing on the Challenger circuit first before they make that transition.

“Emma didn’t spend too much time on the Challenger. She’s gone straight into the deep end with a huge amount of success.

“In that first year, you’re often at tournaments for the very first time, trying to navigate yourself around the site. Finding your way from the changing rooms, to the practice courts, to the match court.

“It can take time to start feeling familiar in your surroundings and also being comfortable around players who you perhaps grew up watching. That is quite a big thing, too.”

What she can learn from other recent young champions

At the US Open, Raducanu was the latest of several young players who have triumphed after producing stunning runs from lower down the rankings.

Since 2017, there have been five other players aged 21 or under who have won their first Grand Slam title. Japan’s Naomi Osaka is the only one so far to have gone on to win multiple majors.

One of those young champions, Poland’s Iga Swiatek, says she felt her “whole world had turned upside down” after winning the 2020 French Open aged 19.

“The first few months were really hard in balancing my tennis work and off-court responsibilities,” the Polish player, who is ranked ninth in the world, told BBC Sport.

“Winning a Grand Slam is great but I think at my age it interrupted the peaceful process of growing up and developing my game.”

Clearly it is difficult to compare young players with differing levels of prior experience and many variable factors having an influence on their careers afterwards.

“I don’t want to compare Emma to others because there are so many facets to the game,” said Austin.

“It is not just technique or how many weapons they have, but also mentally and how they adjust to matches.

“I think Emma is very good technically, a good athlete, she moves well and has terrific balance. So many fundamentals are there and that’s a really good sign.

“Winning the US Open was a fairytale and we’re all fascinated to see how it goes. But I also hope we back off and give her time to develop.”

Swiatek said she enjoys the celebrity side of being a young champion and it seems like Raducanu does too.

Last week, a television commercial was released where she plays in front of a screen where words including ‘distracted’ and ‘fluke’ flash up.

“I think the video speaks for itself,” she said this week.

How will new coach Beltz help her?

Raducanu’s triumph at the US Open came under the guidance of Andrew Richardson, a softly spoken British former Davis Cup player who had little experience of coaching at tour level.

The partnership was seen as a short-term measure and, despite the success, the pair parted ways last year. In comes experienced German coach Torben Beltz.

Keothavong remembers him from when she played Kerber in her career, bumping into him again when he began working with Raducanu at the National Tennis Centre at the end of last year.

“I’ve known Torben for a long time and, although I don’t know him well, he seems to be a really good person, positive energy and comes with lots of experience,” said Keothavong.

“He’s been there and done it at the very top of the women’s game. He understands it and has been on tour as a coach for years so he is familiar with all the players.

“But having said that I wouldn’t put too much emphasis on a coach making or breaking a player.

“Emma is a very independent young woman and she has the ability to figure it out herself.

“A coach is there to help and guide but ultimately it is up to the player and hopefully you can instil the confidence for that player to execute when it really matters.” 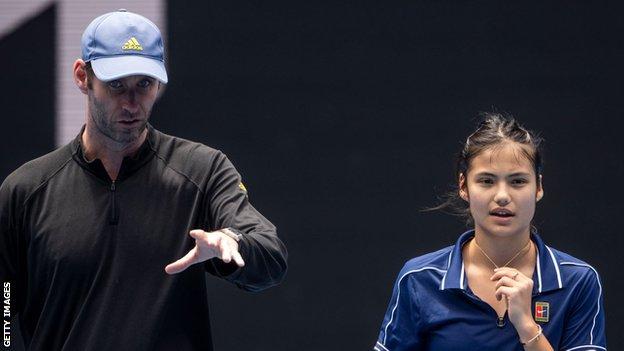 How to Fell a Tree With Chainsaw –

A Spotlight on Tech’s Invisible Start-ups