Once upon a time, you could watch a keynote presentation from any major computer chip company and rest easy in the confidence that the name “Apple” would never pass the lips of any presenter. The message always seemed to be, as per the classic Mad Men meme, “I don’t think of you at all.”

But oh how the tables have turned. With the transition to Apple silicon well underway, and the debut of the high-powered M1 Pro and M1 Max chips last summer, major players in the silicon market are hastening to not only mention Apple, but to prove how much better their latest products are than that computer company that nobody used to care about.

This past week’s Consumer Electronics Show was a news cavalcade for the likes of Intel, AMD, and Nvidia, all of whom took their time to reassure the vendors that rely on them that, yes, they could play in the same league as Apple.

Intel me no secrets, Intel you no lies

Perhaps none of these three protested so vociferously as Apple’s most recent ex-partner, Intel. The company took the wraps off its latest series of laptop-bound processors, the Alder Lake series, including a top-of-the-line model that it described as “the fastest mobile processor. Ever.” And, in the truest press conference braggadocio, Intel put out the benchmarks to drive home that fact, showing its Core i9-12900HK processor just edging out the M1 Max in some tests, and handily surpassing it in others.

Of course, if we took every benchmark chart from every manufacturer at face value, our brains would go up in a puff of smoke like an evil robot. And given that these chips will probably never make their way into a Mac, we are probably stuck with apples-to-oranges (if you’ll pardon the expression) comparisons.

Sure, the Alder Lake performance looks impressive. but did anyone else notice the amount of power Intel’s chip consumes compared to the M1 Mac?

But, even before we get to that point, there’s an important factor in one of Intel’s own charts: impressive though the Core i9-12900HK processor may be, its power consumption is much higher than the M1 Max, starting just below that chip’s 35W and climbing all the way to around 75W. Putting that chip in a MacBook Pro would mean a lot of design tradeoffs that Apple wouldn’t be willing to make, even in the name of more power.

But computer processors aren’t the only industry where Apple’s silicon advances are firing shots across the bow. One of the big stories with the M1 Max and M1 Pro is their graphics performance. In the past, Apple has worked with both major graphics card companies, AMD (which acquired GPU company ATI back in 2006) and Nvidia—both of whom are taking shots at Apple this year, with varying degrees of obliqueness.

Nvidia, often considered the graphics card behemoth to beat, boasted during its CES keynote that laptops using its new RTX GPUs are “up to seven times faster” than a 16-inch MacBook Pro with an M1 Max. Except, several of the tools for which Nvidia provides benchmarks have either only beta support for running natively on Apple silicon or no support at all. Others benchmarks, such as the Blender Cycles package that showed the biggest difference, don’t currently support Apple’s Metal graphics framework, potentially putting them at a big disadvantage at the moment.

AMD, meanwhile, at least took aim at the power efficiency of Apple’s chips, claiming that some laptops using its new Ryzen 6000 chips can get up to 24-hour battery life—though, that is specifically for video playback. (To be fair, Apple cites similar caveats in its own battery performance.) 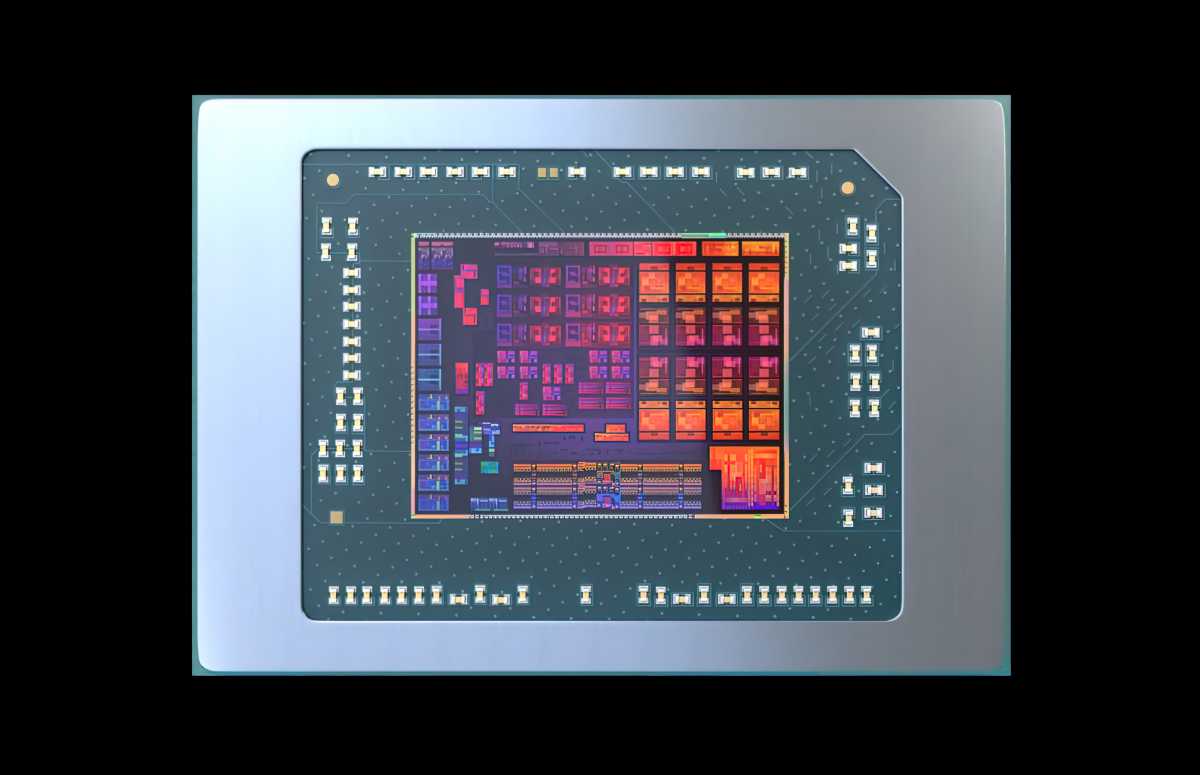 Apple’s not the only competition for these two graphics heavyweights, though. Intel decided to stick its own toe into the GPU business this year, with a new series of discrete graphics cards called Arc. With Intel on one side and Apple on the other—not to mention continued supply chain woes that have made graphics cards scarce—both AMD and Nvidia are likely to be feeling the squeeze this year.

Walking away with it

How did this all happen? Did Apple just walk into yet another industry and sit down as the titan?

Granted, it’s hard to consider Apple the underdog these days, when its market capitalization is flirting with $3 trillion, but let’s dispense with the myth that these silicon advances are things that Apple’s just pulled out of its hat. The company spent the last decade carefully designing and continually improving the processors and graphics chips for its mobile devices before finally implementing that technology in its desktop and laptop computers.

It acquired companies that specialize in silicon, from the PA Semi purchase in 2008 that laid the groundwork for Apple’s processors to picking up parts of Dialog Semiconductor in 2018, and invested heavily in graphics tech firms like Imagination Technologies. And, moreover, it’s optimized for a specific case: the best performance it can get at the lowest power consumption.

With 45 years under its belt, Apple’s become a master of playing the long game and strategically investing in key technologies, then nurturing them over the course of years. So what looks like an amazing magic trick is actually the result of long periods of hard work—propped up by a whole lot of money.

All of that said, let’s not forget that performance isn’t the only reason people choose to use a Mac over a PC. Many consumers aren’t likely to switch, no matter how much power Apple can bring to bear—the gaming market on the Mac, for example, has never been comparable to the PC. And even if Apple silicon performance is eventually outclassed, there will always be those that simply prefer the experience of the Mac.

But at least as it stands now, you can get the joys of that experience and the satisfaction of knowing that your platform’s the one to beat.