NBC’s “Saturday Night Live” returned to the airwaves for the first time since Dec. 18, with a fake President Joe Biden blaming the COVID-19 surge that sidetracked its last episode on the new Spider-Man movie.

The show deployed plenty of New York-centric humor after its month-long break — including its first spoof of Mayor Eric Adams — and featured Ariana DeBose of “West Side Story” as host.

The screen and stage actress said she was representing Broadway and launched into a medley of tunes from the show like “Tonight Tonight,” “I Feel Pretty” and “America” with Kate McKinnon.

“Not many people know this but “West Side Story” is actually based on another classic tale of star-crossed lovers: “90 Day Fiancé,” she cracked during her monologue.

Impressionist James Austin Johnson started the show portraying Biden holding a press conference at the White House, telling the country that the Omicron surge was tied to attendance of “Spider-Man: No Way Home,” for which he couldn’t get tickets.

“This virus has disrupted our lives, canceled holidays, weddings, quinceañeras, gender-reveal parties, wildfires that started as gender reveal parties… whatever the hell is happening with Novak Djokovic,” Johnson said.

“I know you’re tired of getting emails from your kids’ school late at night saying ‘ok come in tomorrow we’re feeling lucky.’”

The skit took a bizarre turn when Pete Davidson emerged from a smoky portal dressed as a sunglass-wearing tough-guy action hero to announce he is actually President Biden and the current world is an alternate universe.

“I am Joe Biden from the real universe. The timeline you’re all living in is about to collapse. You see it was created as a joke starting in 2016 when the Chicago Cubs won the World Series,” Davidson said, using a voice deepening effect.

“Everyone is better off in the real world except for one man named Pete Davidson,” he cracked to White House reporters, alluding to his high-profile love life. “Your world is maybe more fun for him.”

Another COVID-19 themed sketch spoofed TNT’s NBA coverage, where the Nets were beating the Kings 268-1 at halftime because the entire Sacramento squad came down with the virus.

“You can see how the Kings’ lack of NBA players is reflected in the score,” Chris Redd’s Kenny Smith pointed out, as Mikey Day and DeBose portrayed overwhelmed amateur ballers who got called up to the big leagues to face Brooklyn. 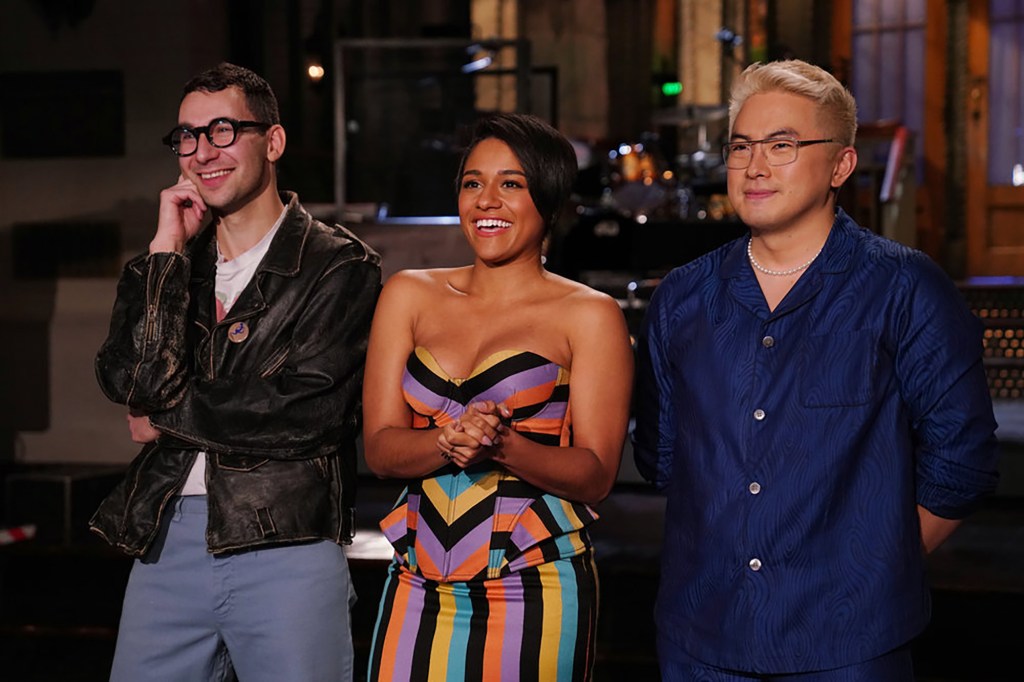 In a fake commercial, the show lampooned the seemingly endless stream of television reboots by previewing an updated “Family Matters” that starred Redd as a criminal Steve Urkel whose tagline is still “Did I do that?,” and Kenan Thompson as calming influence Carl Winslow.

Davidson and Chloe Fineman spoofed obnoxious local mom-and-pop New York-area commercials by playing a heavily accented couple that run a “Formal Emporium” and offer up their nerdy son (Andrew Dismukes) as a date to high school formals to parents worried about keeping their daughters’ virginity intact.

“We got dresses that are as pretty as she is, eh depending on the girl,” a heavily made-up Fineman promised.

“If you’re worried about your daughter having sex after the dance, don’t be — we have the perfect solution,” Davidson’s smarmy character offered.

“She can take our son Donovan, because Donavon wouldn’t know where to start,” Fineman added, as the outer-borough couple went on to describe just how pathetic their son is.

Redd impersonated Mayor Eric Adams strutting to the podium at City Hall to the tune of“Feel So Good,” by Mase.

“The city’s never had a mayor with so much swagger before,” the fake mayor told the press corps. “I mean y’all see me outside — the peacoats, the scarfs, the shine on the bald head yo!,” Redd said, playing up Adam’s Brooklyn accent.

“You can tell I have swagger. Keeps me healthy. See the city’s been suffering from what I like to call a swag-less existence,” he cracked.

“I’m muscular, I’m vegan and I get that thang-thang every day before breakfast,” the imitation mayor bragged. 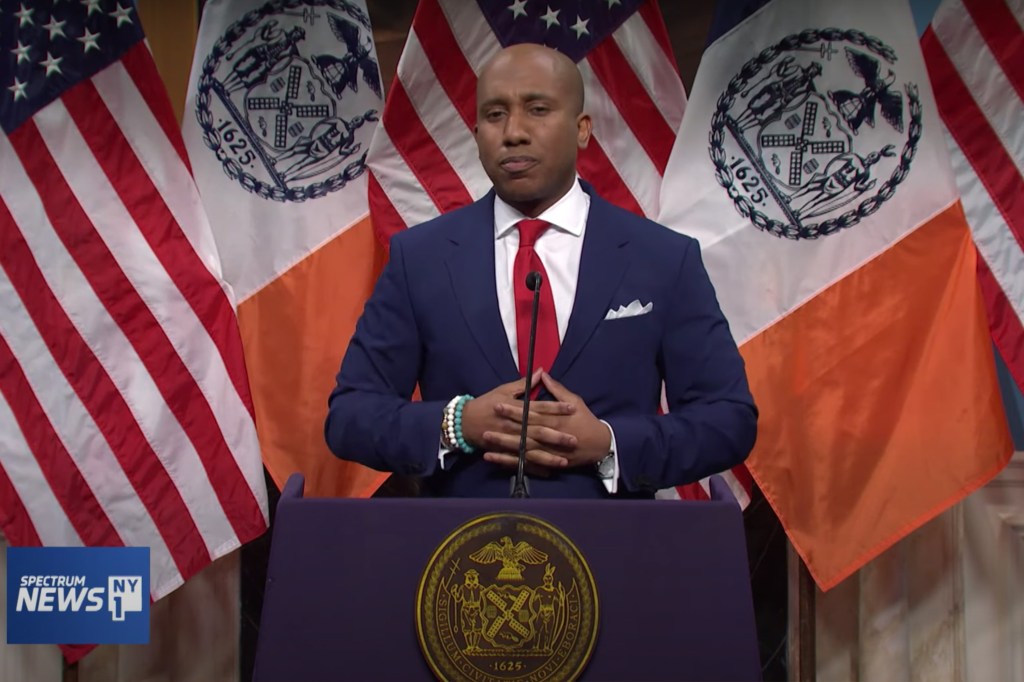 When the gaggle of reporters tried to speak over each other, the mayor snapped back.

“I do not do chaos in my city. I told y’all that,” Redd said. “I was a police officer for over 70 years. If I get startled I start kicking people’s asses,” he promised.

“And excuse me, this man he is not Bill de Blasio, he will kick your ass. Oh my god,” DeBose interjected, playing his secretary.

“She’s joking but she’s from the Bronx so is she?,” Redd-as-Adams asked the assembled reporters, who he gave nicknames like Princess Peach and Slim Shady.

“Weekend Update” took on politicians from both sides of the aisle and featured a GIF-worthy Elmo impersonation from Fineman, who was feuding with an imaginary Sesame Street friend.

“Just like everybody else, President Biden’s New Year’s resolutions fell apart in the third week of January,” Colin Jost said.

“The Supreme Court struck down his vaccine mandate, his voting rights bill got blocked and his approval rating is so low it’s gone into power save mode.”

The comedian also took aim at Prince Andrew being stripped of his royal titles amid underage sex abuse charges.

“It’s an unprecedented case of an adult stripping Prince Andrew,” he cracked.

DeBose and McKinnon spoofed another Broadway classic, with a topical take on “Do-Re-Mi” from “The Sound of Music.”

Jack Antonoff’s New York City-based indie pop outfit Bleachers performed lively saxophone-filled renditions of their songs “How Dare You Want More,” and “Chinatown” after previously scheduled artist Roddy Ricch pulled out of the show because of exposure to COVID-19.

SNL alumni Will Forte is slated to host next week’s episode with musical guest Måneskin.
Source by nypost.com