From mules to ligers, the list of human-made hybrid animals is long. And, it turns out, ancient.

Meet the kunga, the earliest known hybrid animal bred by people. The ancient equine from Syro-Mesopotamia existed around 4,500 years ago and was a cross between a donkey and a hemippe, a type of Asiatic wild ass, researchers report January 14 in Science Advances.

Horses didn’t appear in this region of Asia until 4,000 years ago, centuries after their domestication in Russia (SN: 10/20/21). But dozens of equine skeletons were excavated in the early 2000s from a royal burial complex dating back to 2600 B.C. at Umm el-Marra in northern Syria. The animals, whose physical features didn’t match any known equine species, appear to be “kungas” — horselike animals seen in artwork and referenced in clay tablets predating horses by centuries.

Geigl and her colleagues analyzed a kunga’s genome, or genetic instruction book, and compared it with those of horses, donkeys and Asiatic wild asses, including the hemippe (Equus hemionus hemippus), which has been extinct since 1929. The kunga’s mother was a donkey and its father a hemippe, making it the oldest evidence of humans creating hybrid animals. A mule from 1000 B.C. in Anatolia reported by the same research group in 2020 is the next oldest hybrid.

Geigl thinks kungas were created for warfare, as they could pull wagons. Coaxing donkeys into dangerous situations is hard, she says, and no Asiatic wild ass can be tamed. But a hybrid might have had the characteristics people sought. 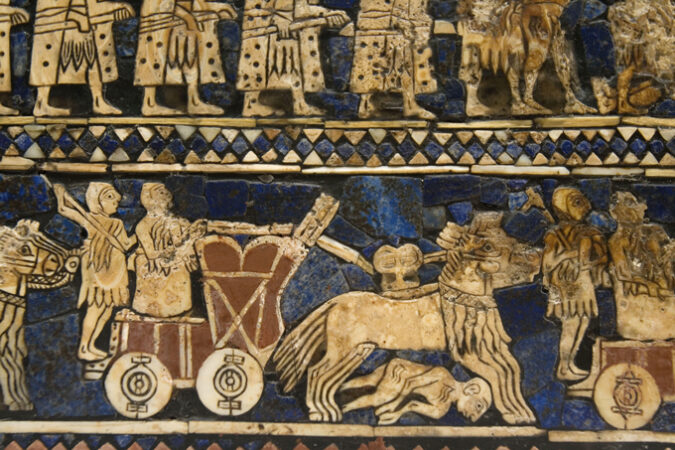 This mosaic scene on a Sumerian artifact, a wooden box dubbed the Standard of Ur that depicts war scenes, includes images of hybrid kungas pulling wagons.agefotostock/Alamy Stock Photo

Coauthor E. Andrew Bennett, a paleogeneticist now at the Chinese Academy of Sciences in Beijing, likens kungas to “bioengineered war machines.” But with the riddle of how kungas were made being solved a century after the last hemippe perished, “it’s impossible to make these animals again.”