Like movie celebrities, it’s a widely known fact that professional athletes earn in the millions, owning multi-million dollar mansions and some of the most expensive cars. Most of these athletes usually have a comprehensive collection of cars ranging from fast supercars to luxury off-roaders. Some of these models also receive extensive modifications and paint jobs to suit their tastes.
Earning in the millions will usually lead to some truly exotic and rare cars ending up in the hands of these professional athletes. Car buying websites like CarIndigo will provide a lot more information on these exciting models if you’re curious. So, without further ado, let’s take a look at some of the most expensive and unique cars professional athletes have splurged their earnings on:

WWE superstar and actor John Cena is usually known for his interest in classic muscle cars, owning a range of cars like the Plymouth Road Runner Superbird, AMC Rebel, and the Buick GSX. However, the most notable addition to his garage is the InCenaRator Corvette, sharing the garage space with another Corvette. From the clever Wordplay to its futuristic looks, the InCenaRator receives some serious modifications including a custom eight-outlet exhaust and a design straight out of the 3000s. Under the skin, the chassis is based on a regular Corvette with a 5.5L naturally aspirated V-8 engine and no notable performance modifications. The InCenaRator is no garage queen either, it participated in the famous Gumball 3000 rally, traveling over 3000 miles. The estimated budget for this build is around $200,000.

Playing for the LA Lakers, LeBron James is one of the most popular basketball players and is known for owning some of the best sports cars on the market. From fast Ferraris to a Rolls-Royce, the basketball star owns a wide variety of cars worth over $2.5 million, which is not surprising when you consider his annual income of almost $100 million. The most unique addition to his garage is a Lamborghini Aventador Roadster, donned in a unique green floral print, similar to his Nike LeBron X1 Everglades shoe. Still one of the most exhilarating supercars in the market, the Aventador shoots to 60 MPH in under 3 seconds and costs upwards of $600,000, especially with the unique paint job. 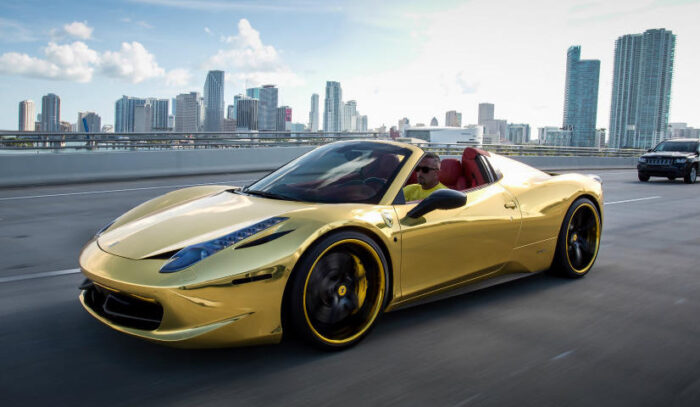 If you’re a fan of baseball, Robinson Cano will usually top the list as one of the best players of the sport, playing as the second baseman for the New York Mets. Like most athletes, Robinson also owns a fleet of exotic supercars and luxurious cruisers to travel around in including a tasteful Ferrari 458 Italia. Ferrari shocked the world when they launched the 458 Italia supercar, offering their new design and a newly developed naturally aspirated V-8 engine. However, Robinson has done some unique mods on his 2014 example, including forger Vellano wheels and a gold paint job with a mirror finish. With these mods, the custom 458 Italia is expected to cost nearly $300,000. 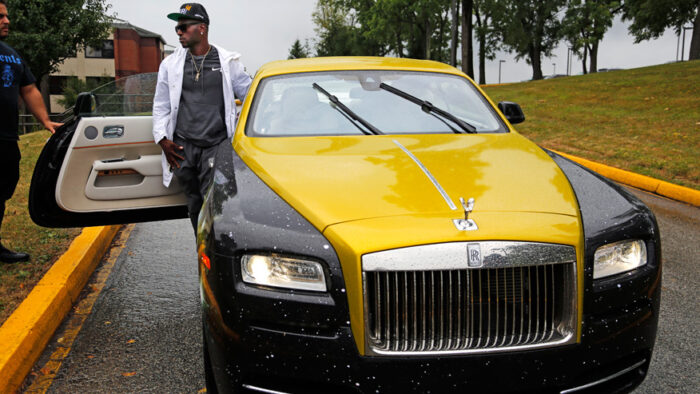 No list will be complete without including a Rolls-Royce, and a special one at that. Antonio Brown, the famous football wide receiver for the Tampa Bay Buccaneers has a whole collection of Rolls-Royce models including the Phantom, Ghost, and Wraith. The latter interests us and is the latest entry into the star’s garage. Wrapped in a unique galactic style Steelers Wrap, the Rolls-Royce Wraith stands out from the rest. The roof gets a unique yellow shade, and Brown has included his initials and number on either side. Currently retailing at $330,000, the Rolls-Royce Wraith remains the pinnacle of luxury among two-door coupes. Other notable additions to Brown’s garage include a McLaren 650S Spider, Ferrari F12, and Mercedes-Benz G550. 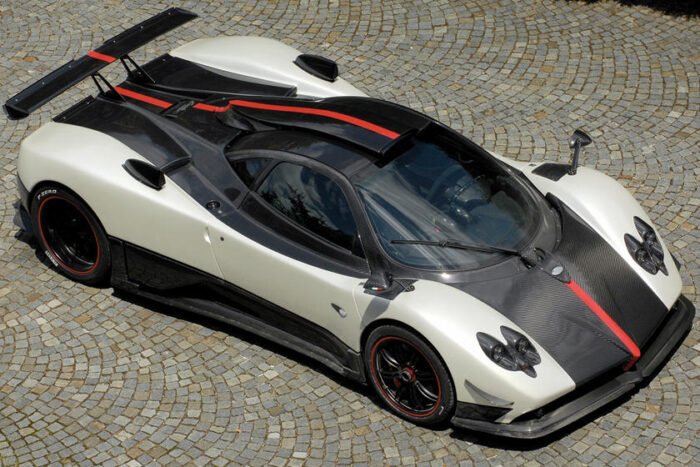 The legendary soccer sensation Lionel Messi has amassed quite a car collection over the years. Currently playing for Paris Saint-Germain, Messi is one of the most famous soccer players and is currently earning $41 million annually. With such a valuable contract, Messi can be seen rolling around in several Range Rovers and Ferraris. However, the most notable addition to Messi’s garage is his Pagani Zonda Tricolore. Limited to just 3 examples, the Tricolore retails at an astounding $6.7 Million per piece, making it one of the most expensive and exclusive cars on this list. The Tricolore features unique bodywork and a no roof design. As a homage to the Frecce Tricolori, the Italian Air Force’s Aerobic training group, Pagani has reworked the interiors to reflect the Aermacchi MB-339A, the plane used by the group. Aerospace materials are used in many areas and the unique paint job stands out. The engine and gearbox are also improved for better performance 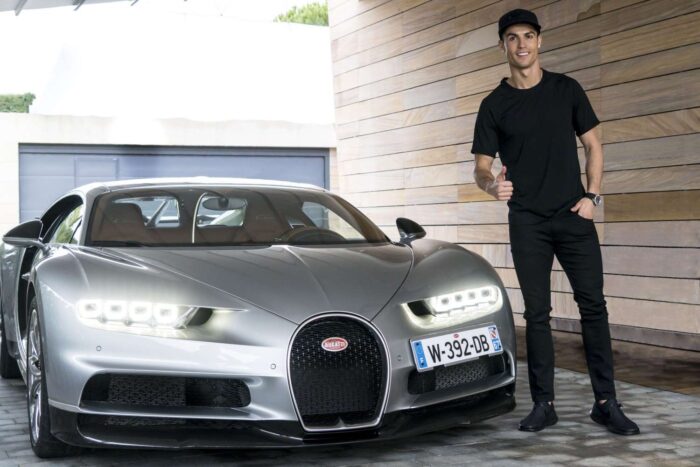 Playing for Manchester United, Cristiano Ronaldo is another soccer star that is widely known around the world for his outstanding performance and skill. Ronaldo is also known for his lavish lifestyle and owns several of the most expensive cars ever released. Estimated at over $24 million, Ronaldo owns one of the most expensive collections on the planet. The most notable addition is the Bugatti Centodieci, a $12 million hypercar, one of only 10 examples in the world. Ronaldo purchased it as a gift for himself for his 36th birthday. However, this is not Ronaldo’s first foray into the Bugatti lineup. The soccer star also owns a Bugatti Chiron valued at $2.5 million. Capable of reaching speeds of up to 240 mph, the Centodieci remains one of the fastest production cars launched to date. However, according to Ronaldo, he prefers to get behind the wheel of his Rolls-Royce Cullinan luxury SUV, which in itself is valued at over $300,000. 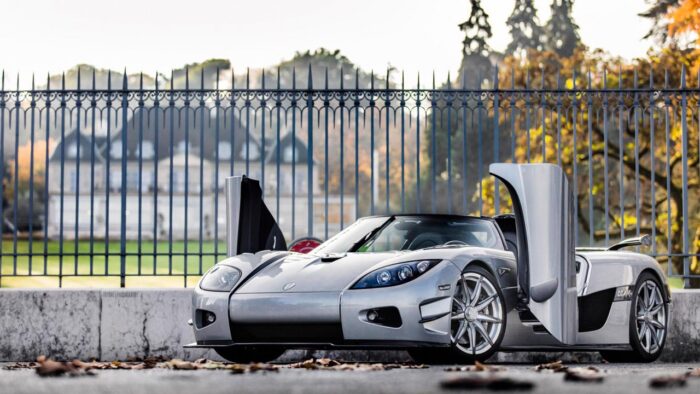 We finally finish off the list with the most exclusive hypercar here, a Koenigsegg CCXR Trevita. With just two examples ever produced, the CCXR Trevita is valued at nearly $5 million. Now working as a professional boxing promoter after retiring from his boxing career back in 2015, Floyd Mayweather is still one of the top athletes in the boxing sport. Coming back to the Koenigsegg, the CCXR Trevita is capable of speeds up to 240 mph, matching the latest Bugatti models. Power comes from a twin-supercharged V-8 and is rated at 1000 hp. Unfortunately, the boxer bid farewell to the Koenigsegg after selling it to the highest bidder at $2.6 million back in 2017. With a garage consisting of over 100 cars, valued at $39 million, he also owns models like the Ferrari Enzo, Mclaren 650S, Lamborgini Aventador, and more.

Why Data Quality is Important