For Some Millennials, The Y2K Comeback Is A Second Chance At The Era’s Biggest Fashion Trends

As a kid growing up in the early 2000s, Neena Rouhani used to envy the women who could wear belly chains and scarf tops popular at the time. For the then-nine-year-old, the styles of the era seemed like the epitome of adult sophistication and confidence. That said, they were far from being playground-appropriate (or parent-approved). This is why now, at 27, she’s embracing the Y2K fashion comeback.

“I have an income, a social life, and boobs, so it’s fun to wear all the trends I didn’t get to fully take advantage of [because of my young age at the time],” the New York-based journalist says.

Over the past year, thanks to TikTok and the industry’s knack for nostalgia, the return of Y2K fashion trends — from micro-mini skirts and low-rise waistlines to trucker hats — has puzzled some millennials who thought these trends were shelved away forever, only appearing in the occasional (cringe-inducing) viewing of high-school yearbooks. For those like Rouhani — who were too young (or deemed too young by their parents) to sport the hyper-sexualized styles of the era, like cropped baby tees that revealed too much skin and the infamous whale tails that literally exposed one’s underwear — though, the Y2K comeback presents an opportunity to finally wear the styles on their own terms.

While Rouhani has embraced the retro trend with open arms, some styles still feel off-limits to her. For example, low-rise jeans, which she thinks “could lead to a heightened sense of body-shaming and insecurity,” or mini skirts, which she says are “just impractical.”

She isn’t alone in feeling conflicted about certain Y2K trends — and the standards they upheld — coming back to mainstream popularity. Rewind to the early 2000s, and you’d find magazines filled with images of celebs like Paris Hilton, Mischa Barton, and Kate Moss wearing trends that predominantly served their slim, white, and airbrushed bodies. While for many Y2K trends are a reminder of a time of poor wardrobe judgment, for others they bring up memories of when they were made to feel inadequate. That’s precisely what writer Olivia Muenter, 28, experienced when she first saw Baguette-style bags and low-rise jeans trending again: “I was transported back to being 13 and super self-conscious about my body and everything I wore.”

Back then, Muenter loved wearing denim mini skirts and babydoll tops from Hollister, paired with calf-height UGG boots. But she always felt that low-rise skinny jeans were not in the cards for her because she wasn’t a size 2 or 4. “I didn’t feel like I was choosing not to wear low-rise jeans. Instead, it felt like there was a rule saying I couldn’t,” she wrote in a piece for Refinery29 last year. In 2022, her outlook has changed: “Unlike how I felt in the early 2000s, wearing exactly what I want is way more important to me now than looking as thin as possible.”

Looking at the current offering of Y2K-style trends and imagery, Muenter says she’s happy to see some improvements in the fashion industry’s embrace of size inclusivity. Today, many brands — including ’00s mall mainstay Abercrombie & Fitch — are catering to a wider range of sizes. “The mere fact that you can see different bodies now in commercials, ads, and on social media is a huge difference,” she says. “[There’s] still a long way to go, but it’s a start.” While Muenter still isn’t ready to reach for low-rise denim, she says that she is enjoying the comeback of other Y2K trends, like claw clips: “I don’t know why they ever went out of style — they’re so practical.”

Nayamka Roberts-Smith is embracing Y2K trends to revisit their teenage self. Like Rouhani and Muenter, Roberts-Smith, 31, was a tween in the early 2000s, often wearing butterfly clips, airbrushed T-shirts, and low-rise jeans. She remembers owning a denim pair with a zipper so short she could barely bend over for fear of a mishap. While the memory may sound uncomfortable to those who still remember the shimmy move that sitting down in low-rise jeans required, she recalls them being her “prized possession.”

Roberts-Smith’s style at the time was so rooted in Y2K trends that she even became a meme in 2019, after she posted a 2003 photo of herself putting on, what else but, shiny lip gloss. In the photo, she’s wearing a bedazzled corset, paired with chandelier earrings, and rimless sunglasses. Almost two decades later, she finds herself coming back to that photo as a reference for her personal style as an adult. So far, she’s experimented with butterfly tops a la Mariah Carey, which she says “gave me so many feels.” As for the low-rise jeans? “It’s coming,” she says.

For Jessica Camerata, the chance to embrace low-rise jeans, belly chains, and tiny tops in the early 2000s never came because her parents didn’t allow her to wear them. Instead, back then, Camerata was fond of Juicy Couture tracksuits, popularized by celebs like Paris Hilton and Kim Kardashian. Now, as a 34-year-old style blogger, she’s using her audience’s interest in Y2K trends as an opportunity to jump back in time: “The more I see pieces get styled by my peers, the more excited I get about trying out trends again.” 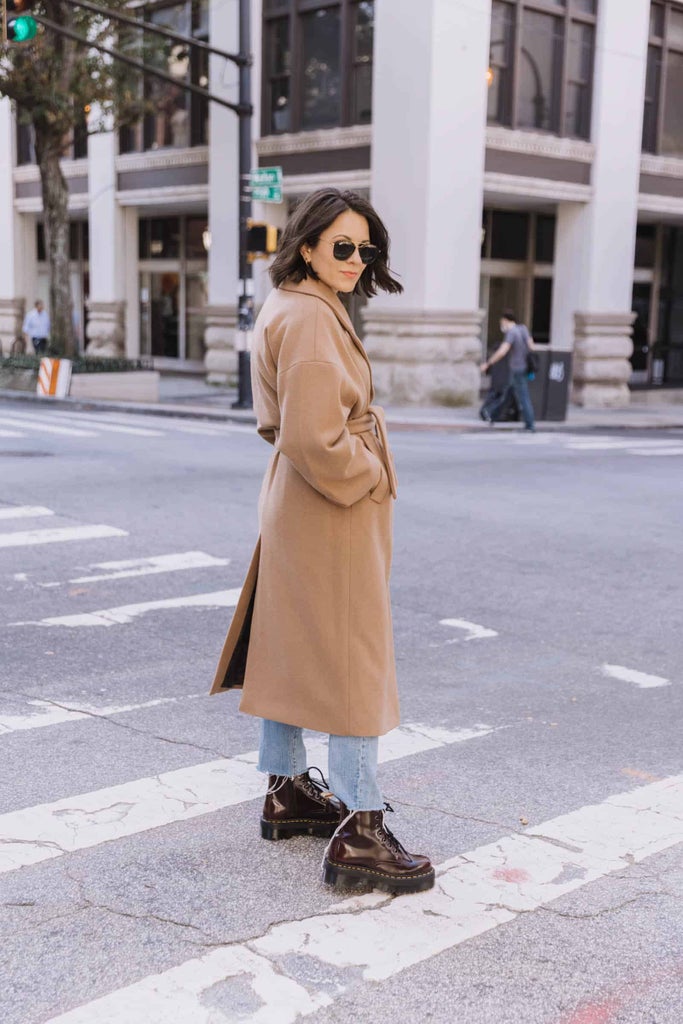 However, she’s not looking to be a 30-something version of a teenager. Instead of “ovary pants” and heeled-thong sandals, she’s embracing trends from earlier eras, like straight-leg pants and Dr. Martens boots, that were staples in the ’00s and withstood the test of time. Camerata is also having fun with trends she didn’t even consider back in the early 2000s, like leather blazers and matching mini sets. “It’s like we’re getting permission to have at it and make [the trends] our own,” she says.

While some millennials see the current Y2K fashion renaissance as an entertaining way to revisit the questionable styles of their youth, for many, this latest wave feels like an opportunity to reclaim the freedom they didn’t have as teens. “It’s different now because there are less rules about who can wear what,” says Muenter.

Roberts-Smith agrees: “Now, as an adult, I can be who my 13-year-old self wanted to be.”

Like what you see? How about some more R29 goodness, right here?

How I Stopped Worrying About Low-Rise Jeans

How To Integrate Inbound Vs Outbound Marketing Strategies For Your Business?

In Milan, A New Kind of Classicism

Our Slow Cooker Orange Chicken is a Healthier Takeout Option