Police keep watch outside a fence surrounding the Main Media Center that is inside a closed loop area created to prevent the spread of the coronavirus disease (COVID-19) at the Beijing 2022 Winter Olympics, in Beijing, China, January 12, 2022. Picture taken January 12, 2022. REUTERS/Thomas Peter

BEIJING—In a hived-off section of the Beijing airport, arrivals for next month’s Winter Olympics are met by staff in white protective suits and undergo COVID-19 tests and swabs of luggage before being whisked in police-escorted buses to fenced-off hotels.

Unlike last summer’s Tokyo Games, which took place in a porous “bubble”, the perimeters of Beijing’s “closed loop” are sealed and guarded – precautions that will be put to the test as the highly transmissible Omicron variant surges globally.

At the entrance to the Main Media Center this week, security personnel guarded a locked gate, police cars sat nearby and signs on temporary fences warned those within the area of the “end of the closed loop”.

Once inside, people cannot leave until they either depart the country or complete several weeks of quarantine. This includes about 20,000 Chinese volunteers and staff at the venues who will enter the loop. 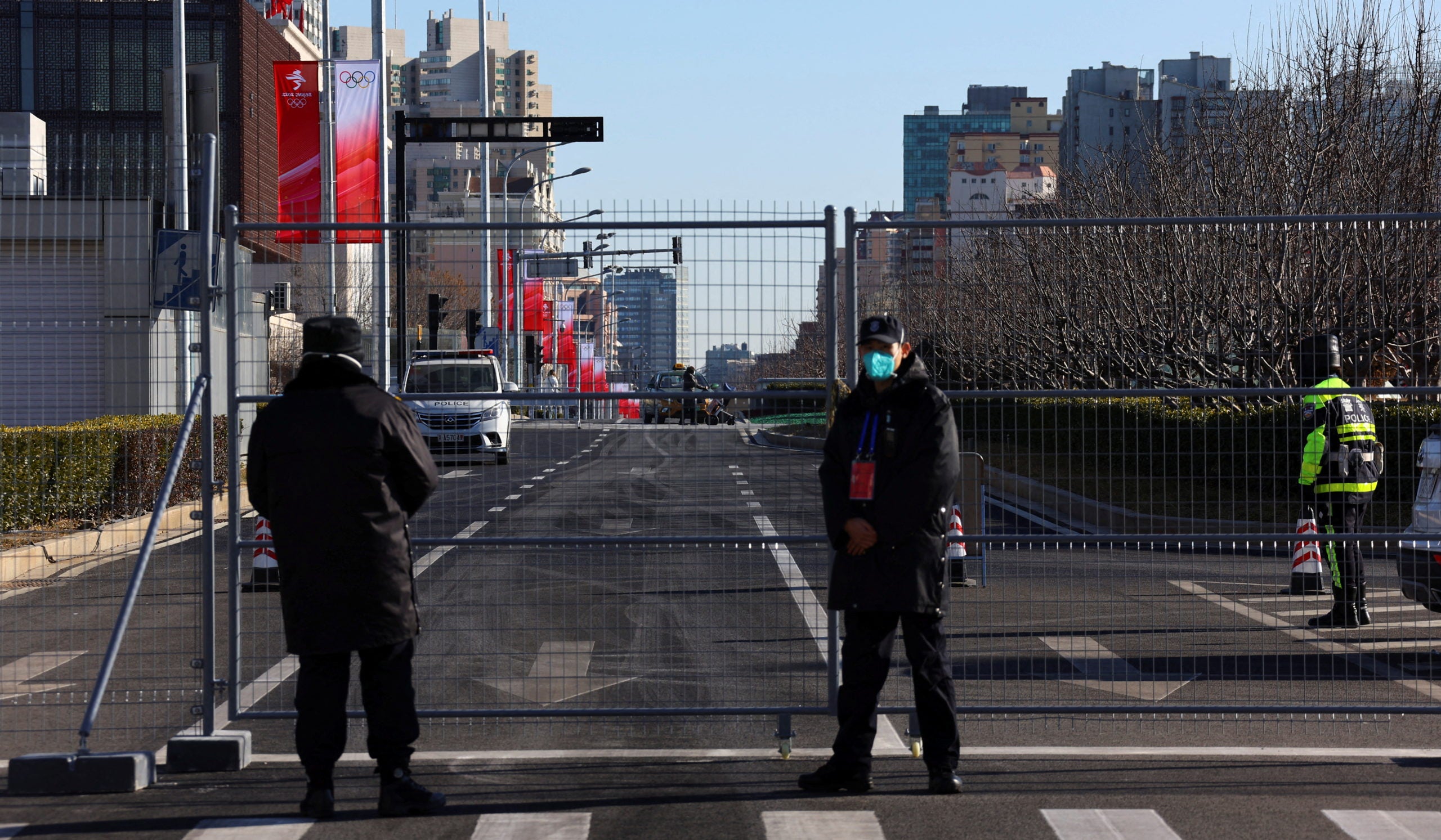 Security staff stand guard inside a closed loop area designed to prevent the spread of the coronavirus disease (COVID-19) ahead of the Beijing 2022 Winter Olympics in Beijing, China January 13, 2022. REUTERS/Fabrizio Bensch

Overseas participants, arriving mainly on special charter flights, enter the loop as soon as they land at Beijing Capital International Airport. Early arrivals say their buses had police escorts to their hotel.

Authorities are determined to create a physical barrier between participants and the general population. On Sunday, Beijing officials warned locals to stay away from designated Olympic transport vehicles in the event of a traffic incident.

The loop, which began on Jan. 4 and will open fully by Jan. 23, according to state media, covers sealed-off sections of Olympic venues and designated accommodation, amounting to a series of bubbles. Participants are required to move between them using designated transport.

Organizers have said they expect COVID-19 cases in the bubble, but added on Tuesday they don’t plan any changes to their protocols unless there are many cases inside the loop. They declined to say whether or how many COVID-19 cases had been found among personnel who had arrived thus far ahead of the Games, which start on Feb. 4.

There will be no international spectators at the Beijing Games, and organizers have yet to say how many local spectators will attend.

China has largely managed to curb the local spread of COVID-19 since it first emerged in the central city of Wuhan two years ago, all but closing its borders to travelers. Unlike in Tokyo, where the Olympics were postponed by a year, there has been little doubt that the Beijing Games would proceed on schedule.

“Ultimately I think it will be difficult for China to prevent widespread Omicron transmission, but the Olympics themselves should be manageable because they are a discrete event that can be tightly controlled with huge resources applied to the task,” said Michael Baker, professor of public health at the University of Otago in Wellington.

Everyone in the loop must have a daily PCR test administered by staff. In Tokyo, tests were largely self-administered.

To leave their accommodation, participants must first scan their pass and wait for a green code to confirm they’ve had a negative test result within the last 24 hours.

Food delivery from restaurants outside the loop is not allowed. At the main press centre, some of the food is prepared and served by robot chefs that assemble hamburgers and deliver dishes to tables from an overhead grid.

More than 2,000 international athletes are set to come to China for the Games, along with 25,000 other stakeholders, according to organizers, a large number from overseas. Organizers did not say how many would be in the closed loop.

Our Friendships Evolve Because We Do

Omicron Is Enforcing Its Own Soft Lockdown