In the late 1980s, comedian Bob Saget became a household name on the sitcom “Full House” playing Danny Tanner, an earnest widowed father of three. That persona followed him as he also took the helm of “America’s Funniest Home Videos,” in which his family-friendly commentary made us think butter wouldn’t melt in his mouth.

But in real life, Saget — who was found dead in an Orlando hotel room on Sunday at the age of 65 — was known in showbiz circles and by comedy fans for his raunchy act and bawdy sense of humor. The beloved actor once did “whippits” — hits of nitrous oxide — on the set of “Full House,” admitted he was “a flirter” with other women in the final years of his first marriage and copped to drunken driving in the aftermath of his divorce.

Friends remember the late Bob Saget as a filthy comic, a wonderful friend and a devoted father.NY Post photo composite

“I saw Bob on HBO’s Rodney Dangerfield special 30 years ago,” “Entourage” creator Doug Ellin told The Post. “He was this comic that was kind of dirty, and then he did ‘Full House.’ “ 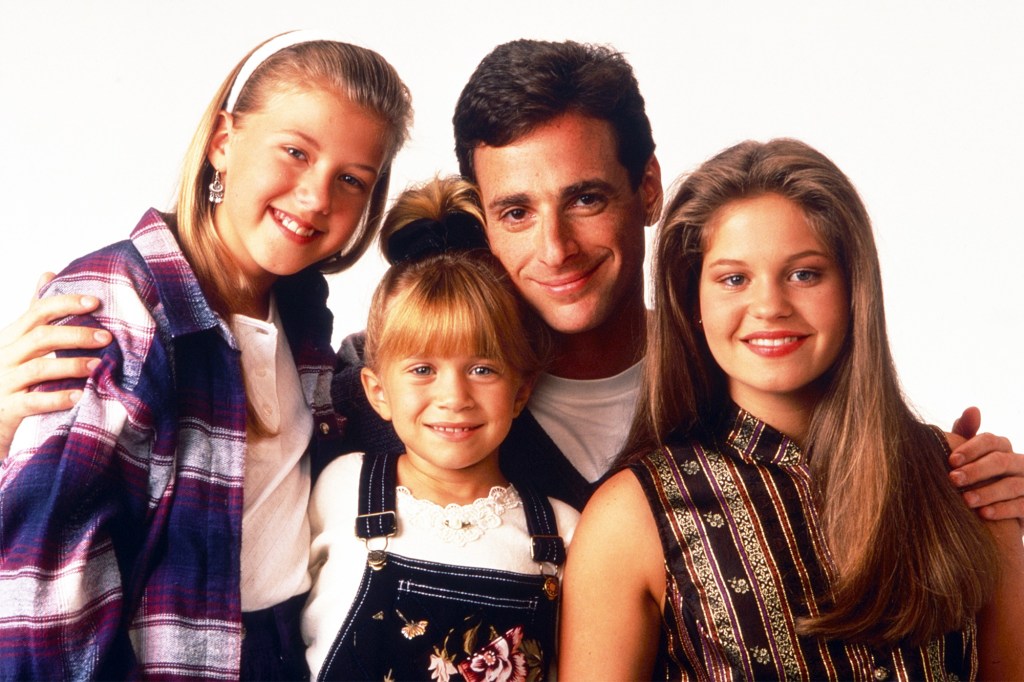 Around 2004, before he even met Saget, Ellin scripted a hyperbolic version of the comic as a washed-up, hooker-loving womanizer living in a one-bedroom apartment for his HBO hit.

“We had lunch and he said, ‘I’ll do anything you say except for play broke. Hookers or drugs? Yeah, that’s fine. But I don’t want to be broke.’

“There was no sensitivity to anything else, but being successful was important to him,” said Ellin, who called Saget “gracious, sweet and incredibly smart.”

The role on “Entourage” — and his 2005 turn in the filthy comedy documentary “The Aristocrats” — took a jackhammer to his cheesy sitcom dad image, both shocking and endearing fans, especially a younger audience. 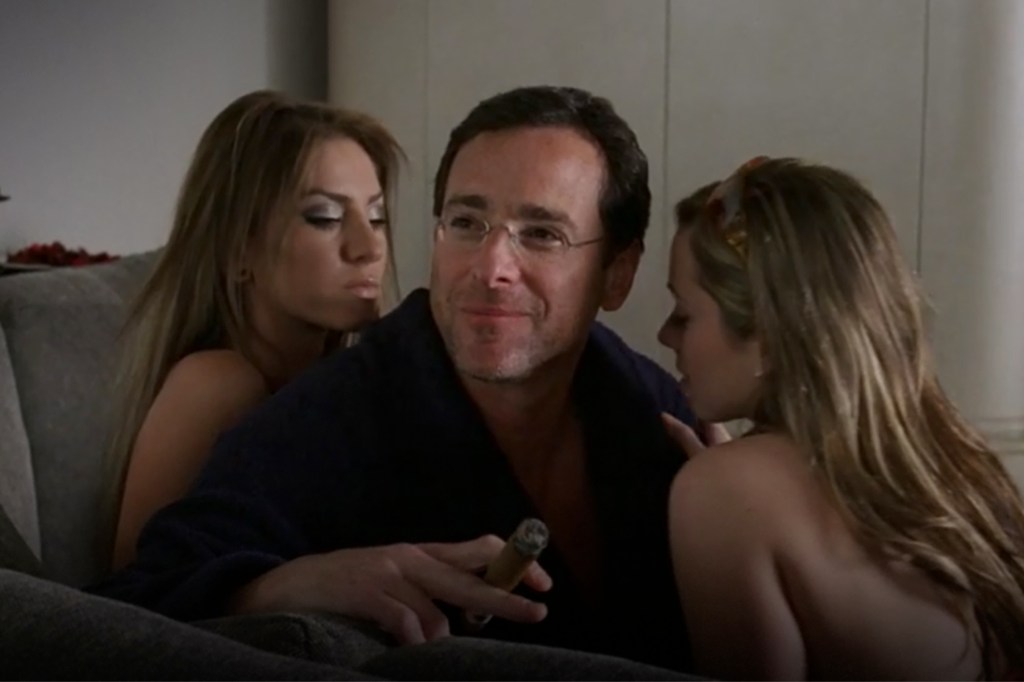 Saget played a hyperbolic version of himself for the HBO show “Entourage” during its second season. Doug Ellin, the show’s creator, told The Post that Saget was “gracious, sweet and incredibly smart.”HBO

“I remember when ‘The Aristocrats’ came out — people couldn’t believe Bob Saget was talking that way,” his friend and fellow comedian Gilbert Gottfried told The Post. “But for the people who knew him, you can’t believe he talked any other way.”

In his 2014 memoir “Dirty Daddy: The Chronicles of a Family Man Turned Filthy Comedian,” he wrote of his frustration of being typecast and asked mentor Dangerfield for advice.

“I told him I was sick of only doing ‘family stuff’ and wanted to move into edgier comedy but I was concerned it was too late because people have a way of branding you with what they perceive you to be,” he wrote.

In 1998, while promoting the movie “Dirty Work,” which he directed, Saget told Howard Stern how he shocked live audiences while doing stand-up.

“I’m like filthy right now … All I want to do is curse and fall down, because I’ve been on 8 o’clock television so long. It’s like comedy Tourette’s. That’s what I’m like though. I was even filthy while I would do the shows [‘Full House’ and ‘America’s Funniest Home Videos’]. I would get onstage and curse and stuff and people’s hair would, like, burn. ‘Children of the Corn,’ their eyes would roll back. ‘It’s Michelle’s Daddy, no!’ “ 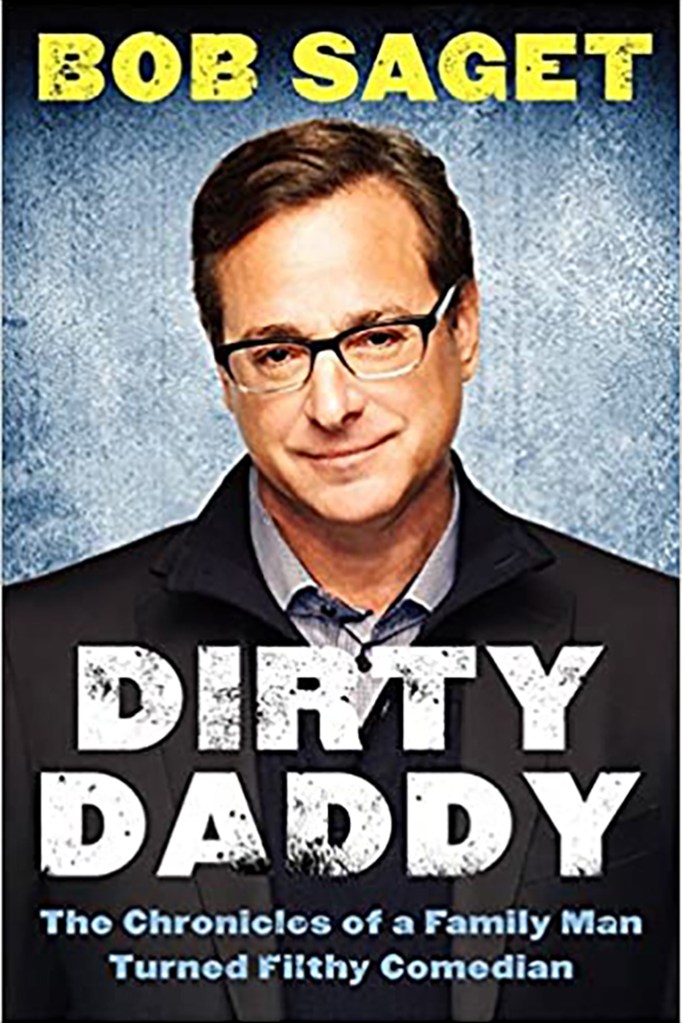 ‘I guess we got high’

Born in Philadelphia, Saget moved to Norfolk, Virginia, then to Encino, California, and back to a Philly suburb where he graduated high school. He wrote how he planned to become a doctor. But his teacher, Mrs. Zimmerman, intervened, telling him, “Do not become a doctor. You need to make movies and perform and write. You need to make people laugh.” He changed his major at Temple University to documentary filmmaking and then hit the comedy circuit.

In his book, he recalled one of his earliest jokes, which showcased his penchant for blue humor: “My mother never let me go to camp as a little kid because she thought I’d get embarrassed undressing in front of little boys. But I kind of like it now … That’s not true. I like it a lot. That’s not true, I’m not a senator.”

In 1987, he landed his big break on “Full House” playing alongside friends John Stamos and Dave Coulier, whose impressive flatulence Saget regularly referenced in his memoir.

Behind the scenes, the trio was always cracking raunchy, juvenile jokes and even raided the prop closet to do whippits while the crew filmed scenes for the birthday party of Michelle Tanner (played by the Olsen twins).

But Saget wasn’t really one for getting high. He admitted to trying cocaine, but wrote, “I’m anti-drugs, except the ones I take for cholesterol, anxiety, a sleep disorder and tranquilizing animals.” 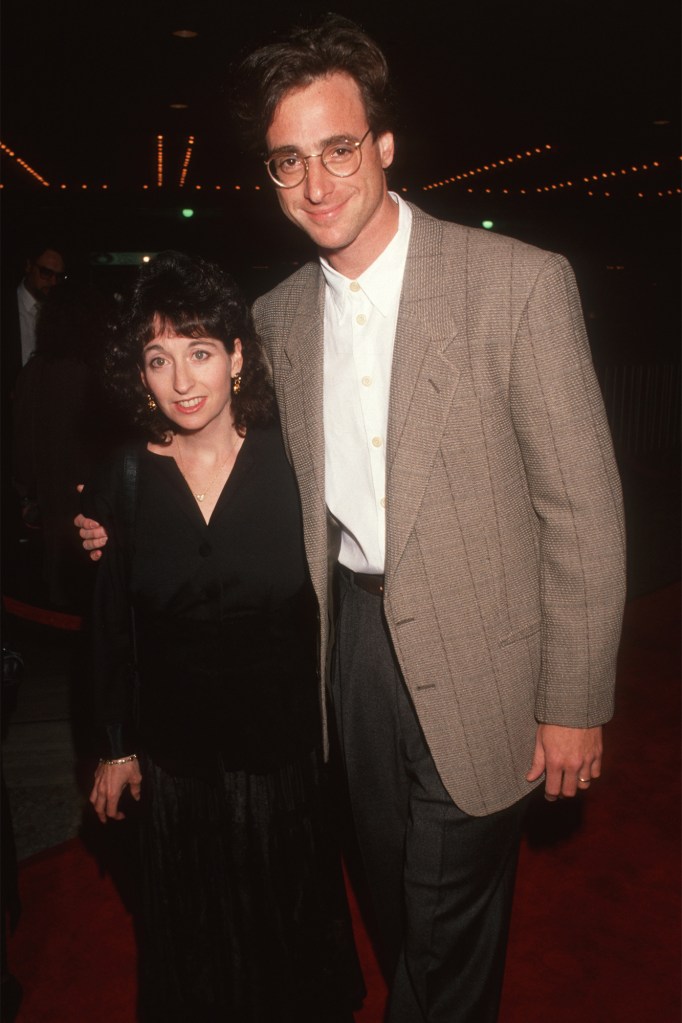 Saget and his first wife Sherri Kramer attending the premiere of “The Silence of the Lambs” on Feb. 1, 1991, in Century City, California. They have three daughters together.Ron Galella Collection via Getty Images 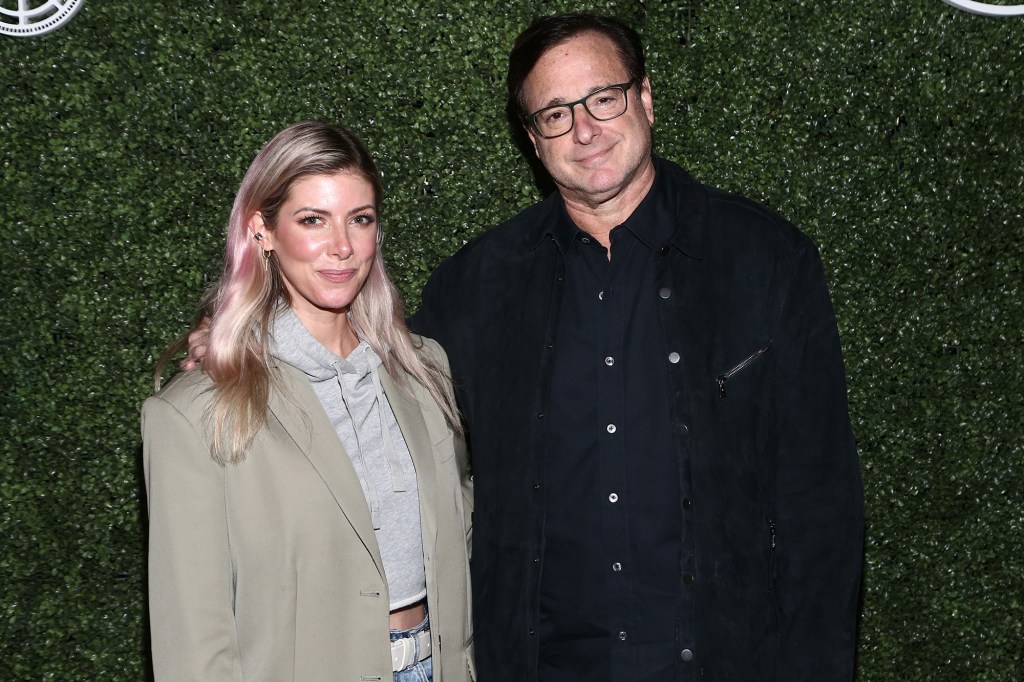 In 1982, he married high-school sweetheart Sherri Kramer and had three daughters, Jennifer, Aubrey and Lara. But the pair divorced in 1997, and he told Stern, “We weren’t happy together.” He added: “The last couple years of our marriage I was more of a flirter than I’d ever been in my life … it wasn’t about me being famous, it was about me being an idiot.”

He admitted to Stern that he dated women as young as their 20s, and in 2018, he married TV host Kelly Rizzo, 23 years his junior.

But for many years, he leaned into the bachelor life and engaged in risky behavior by drinking and driving.

“I was a fool. One of those idiots who brags to people while intoxicated, that he can drive better than he’s drunk,” he wrote. “I repeatedly committed a sin against humanity: drinking and driving … I was divorced, dumb, sometimes drunk and the luckiest a–hole in the world for not doing anything that wound up hurting anyone.”

In 2003, he blacked out while driving and rolled up on the curb. But he quit drinking and driving cold turkey after a cop pulled him over for speeding on the Pacific Coast Highway, a trip he was making to retrieve his youngest daughter’s stuffed bunny she left behind at Kramer’s home. The cop let him off with a warning.

“To this day, I’m appreciative of his compassion.”

Compassion was a virtue that also helped define Saget, whose family hardships and tragedies also influenced his work.

At 21, he won a Student Academy Award for a black-and-white short, “Through Adam’s Eyes,” which followed his 7-year-old nephew’s facial reconstruction surgery.

He lost his sister Andi at age 34 to a brain aneurysm. In 1994, sister Gay died, at age 44, from scleroderma, a rare disease that results in the hardening of body tissue.

Two years later, he directed a television movie on ABC called “For Hope” about a woman stricken with the then-largely unknown disease in the prime of her life. It was loosely based on his family’s experience and helped raise awareness for the destructive condition. 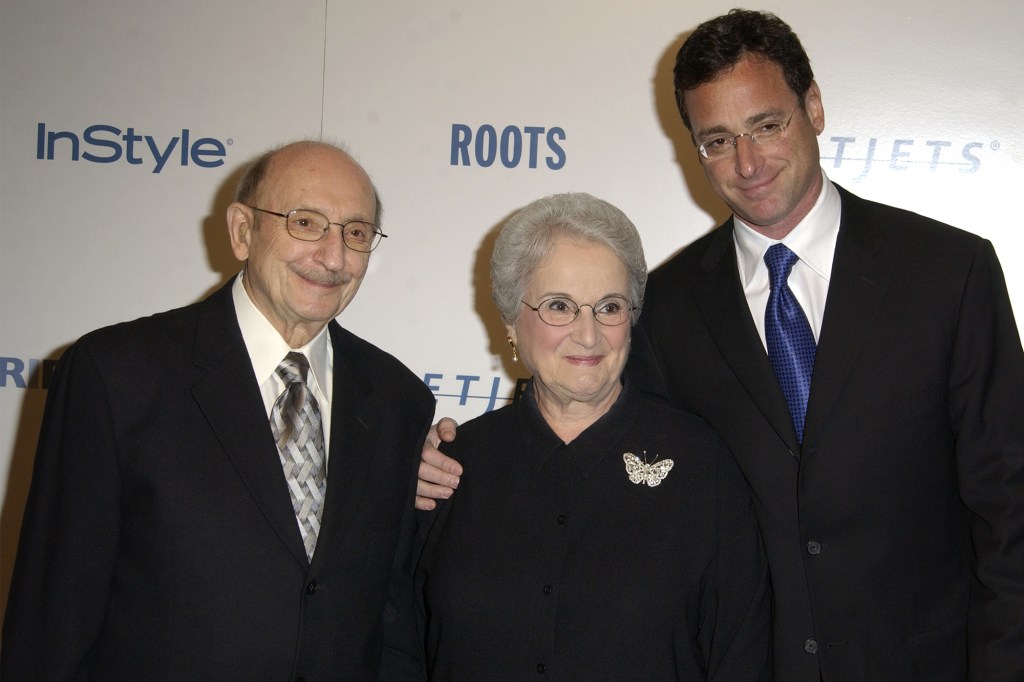 Bob Saget with his parents, Rosalyn “Dolly” and Benjamin Saget.WireImage

He was on the board of directors at the Scleroderma Research Foundation and threw events that drew A-listers like Robin Williams, Billy Crystal and Jimmy Fallon.

“That charity meant so much to him, and it was a beautiful event every year,” said Ellin, whom Saget roasted for his 45th birthday.

Saget also wrote that losing sisters and several uncles — he told Stern that three of his uncles died of heart attacks before the age of 40 — made him “obsessed with death” at a young age.

“As you now know, many of my relatives died young,” he wrote, adding, “I never pictured myself making it past my fifties.”

And though he shed much of his Danny Tanner-isms, he reprised his role in the 2016 Netflix reboot, “Fuller House.”

And by all accounts, he was devoted to both his television and real-life daughters. 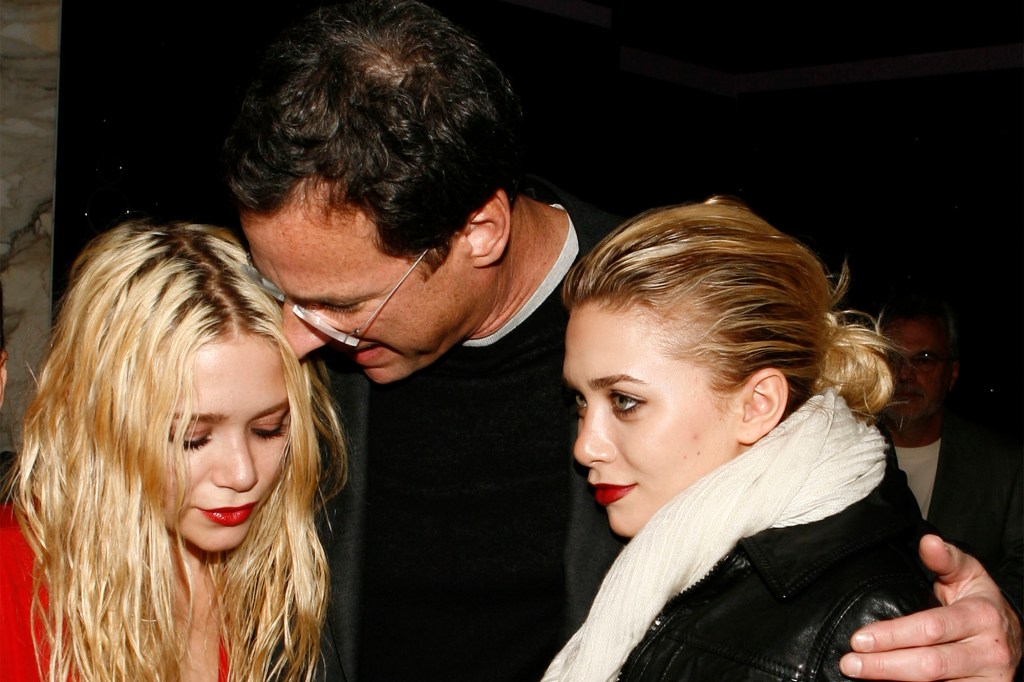 Saget remained close with his co-stars, Mary Kate and Ashley Olsen, of whom he was said to be protective.Getty Images

“He had a very good relationship with his daughters,” said Gottfried, adding that he was also protective of the Olsen twins.

TV writer Alan Zweibel first met Saget in 1986 while working on “It’s Garry Shandling’s Show,” noting he was “very sensitive” and “ended every conversation with ‘I love you.’ ”

“Saget loved his role on ‘Full House.’ He loved every second of it — because he got to be a dad,” Zweibel told The Post. “His e-mail address was bobbydaddy.”

At the time of his death, Saget was doing a 22-city comedy tour.

A devastated Gottfried spoke to his friend just a week ago.

“He certainly seemed happy. He was happy about going out on the road more and having a direct connection with the audience. He was happy with how the previous show went. We said, ‘I love you.’ “ 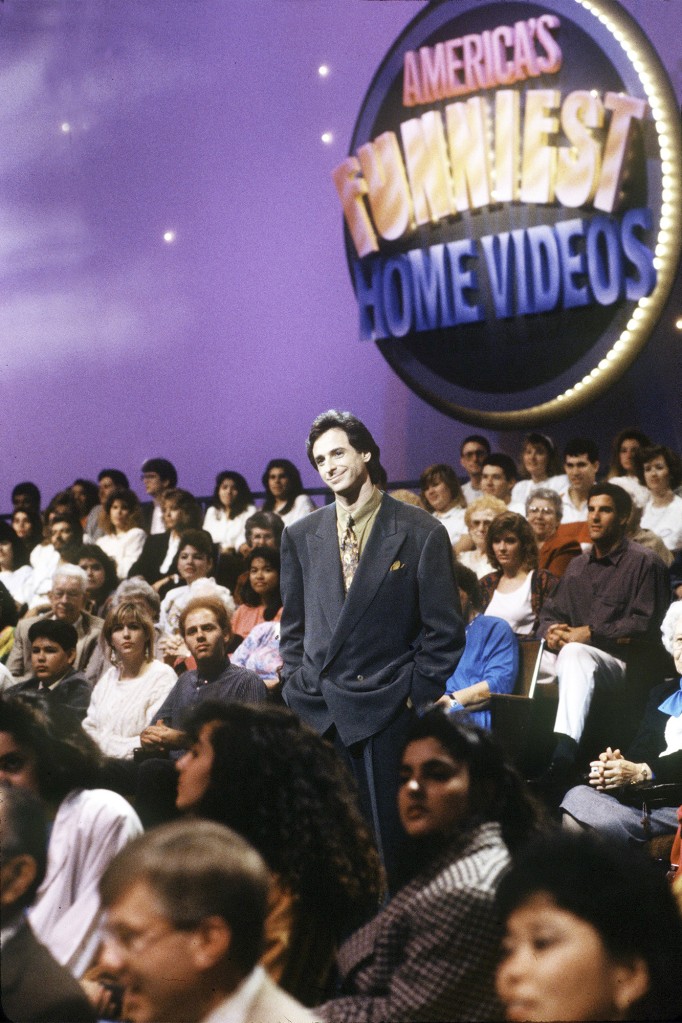 Saget hosted “America’s Funniest Home Videos” and is seen above in an episode from 1990.Disney General Entertainment Con

These High Protein Overnight Oats Are an Easy and Delicious Breakfast

8 Factors to Consider Before Buying or Building your AI Solution

Where Did It Come From? How Is It Transmitted? What Are the Symptoms?